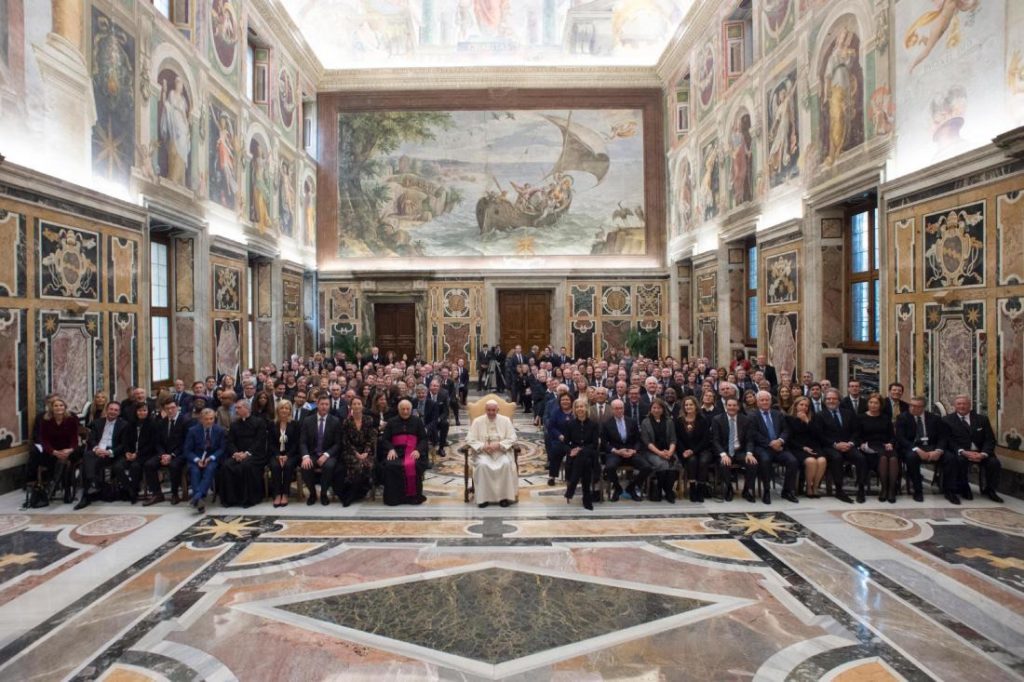 Leading Fortune 500 CEOs and various political and religious leaders met with Pope Francis during a Global Forum in Rome. The theme of this gathering was called “The 21st Century Challenge: Forging a New Social Compact.” The CEOs of the world’s richest corporations were glad to visit Pope Francis at the Vatican, and the Pope was more than happy to welcomed them in too.

During this Global Forum in Rome the Pope expressed to these business leaders his plans to change the world:

“Our world today is marked by great unrest,” Pope Francis told the delegates upon receiving the report. “Inequality between peoples continues to rise, and many communities are impacted directly by war and poverty, or the migration and displacement which flow from them…. Your very presence here today is a sign of such hope, because it shows that you recognize the issues before us and the imperative to act decisively.”

Not only is the Vatican attracting and influencing both the political and religious world, not only is the Pope admired and praised with royal receptions everywhere he travels, but now the Bishop of Rome is being embraced by the the top business leaders from around the world.

Prophecy has described that this very scene would take place during the last days:

Pope Francis continues to dominate the news headlines. He gets free blanketed news coverage 24 hours a day promoting his message to the world. He is worshipfully embraced by almost all the people of the earth.

The stage is being set for the final act in the drama. Our world is rapidly changing and its past time for the church of Jesus and His followers to rise up and live out to the full meaning of the everlasting gospel of Revelation 14:6-12. We have a message that we must live, and this same message is to be preached to every nation, kindred, tongue and people.

“Are we to wait until the fulfillment of the prophecies of the end before we say anything concerning them? Of what value will our words be then? Shall we wait until God’s judgments fall upon the transgressor before we tell him how to avoid them? Where is our faith in the word of God? Must we see things foretold come to pass before we will believe what He has said? In clear, distinct rays light has come to us, showing us that the great day of the Lord is near at hand, “even at the doors.” Let us read and understand before it is too late” (Testimonies, Vol. 9, p. 20).