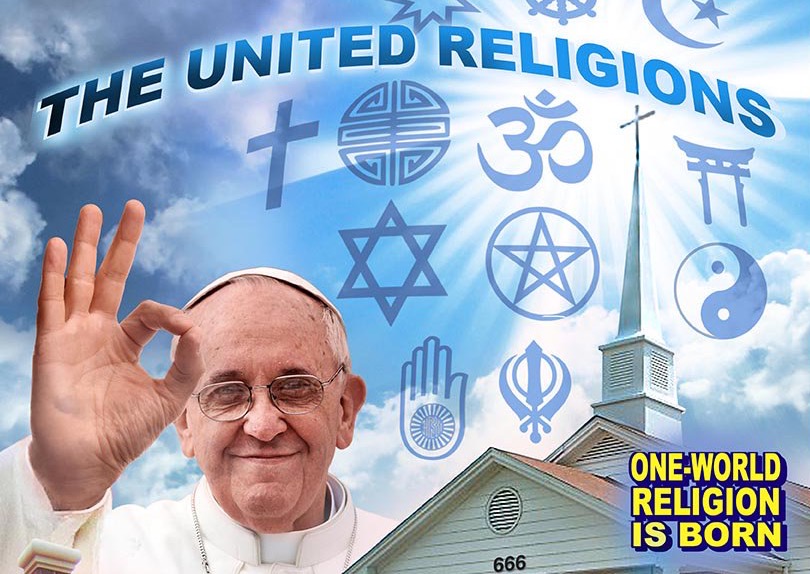 During his visit to Abu Dhabi last month, Pope Francis signed a historic document called “The Document on Human Fraternity for World Peace and Living Together.” Contained in this document is a statement on the plurality of religions that should concern every Christian.

In paragraph 27 of this document we find the following declaration:

“The pluralism and the diversity of religions, colour, sex, race and language are willed by God in His wisdom, through which He created human beings. This divine wisdom is the source from which the right to freedom of belief and the freedom to be different derives.” [1]

This is a concerning statement which suggests that God actively willed into existence the “diversity of religions.” This statement contradicts the very theme of the entire Bible, both the Old and New Testaments. The numerous diverse religions found in our world each have their own unique teachings that contradict what every other faith group believes. How can having all these conflicting beliefs be by God’s design? Is it really God’s will for some people to live and stay in error? And is the concept of having one, true church, which defeats the idea of “plurality,” also go against the will of God?

This is the message being promoted by Pope Francis and his ecumenical movement. This is why we stand firmly against participating in all these interfaith events that push the notion that God wants people to worship false gods, embrace superstitions, believe in heresy and live under a deception. The joint statement signed by Pope Francis said that the plurality of religion was God’s “will,” meaning that our Heavenly Father commanded that false beliefs ought to exist and be embraced.

Catholic apologists are now attempting to minimize this disastrous statement by clarifying what the Pope meant to say. Apparently, what Pope Francis wanted to say is that God “allows” the plurality of religions through His permissive will. [2]

However, that’s not what the statement says. It doesn’t say that God allows or permits plurality, it says that the plurality of religions was God’s “will.” “Oh, but that’s taking about His permissive will,” they now say. There’s a problem. Pope Francis associated the plurality of religions and compared them to the diversity we see in sex, race and languages. In fact the Pope used the same verb when making these comparisons. Look at the statement again:

“The pluralism and the diversity of religions, colour, sex, race and language are willed by God in His wisdom.”

The historic document signed by Pope Francis was clear, and the message is this – God’s will for mankind is found in the plurality of religion. This contradicts the central theme that Judaism in the Old Testament, Christianity in the New Testament and a commandment-keeping people (Revelation 12:27; 14:12; 22:14) in the last days are the only true people of God.

Why did God call Abraham out of idol-worshipping Babylon if idol worship was God’s will for mankind? Why did God give a 10 Commandment moral law that forbids the worship of other gods if it was God’s will that these gods be worshiped? Why did Jesus command His disciples to teach all nations and baptize them in His name if it wasn’t even God’s will for people to believe in His Son at all? And why would God give a final warning message in these last days to every nation and people (Revelation 14) if everyone is already living out God’s will?

Do you see how dangerous this ecumenical gospel is? It turns the God of heaven into a God of relativism. He becomes a God who doesn’t have any truth and who doesn’t care what people do or believe? The only logical conclusion to the ecumenical philosophy is that every religious faith system known to man, including nature worship and the worship of demons, is actively willed by God for the good and benefit of mankind. This completely undermines the entire plan of salvation that attributes Christ’s life, death, burial, resurrection and heavenly intercession as the most important acts in the history of the comic universe!

They want you to believe that every false faith will save you because it’s all part of God’s will. They want us to lock hands and join these multi-faith prayer and worship services because all religions are equal anyways. It is “willed by God in His wisdom,” says Pope Francis.

Don’t fall for that. The everlasting gospel is the only means by which we are saved (1 Corinthians 15:1-4). It is a sacred duty and calling to take this gospel in context to Revelation 14:6-12 to the entire world. This is our current message and mission.

“In a special sense Seventh-day Adventists have been set in the world as watchmen and light bearers. To them has been entrusted the last warning for a perishing world. On them is shining wonderful light from the Word of God. They have been given a work of the most solemn import—the proclamation of the first, second, and third angels’ messages. There is no other work of so great importance. They are to allow nothing else to absorb their attention” (Last Day Events, p. 45).