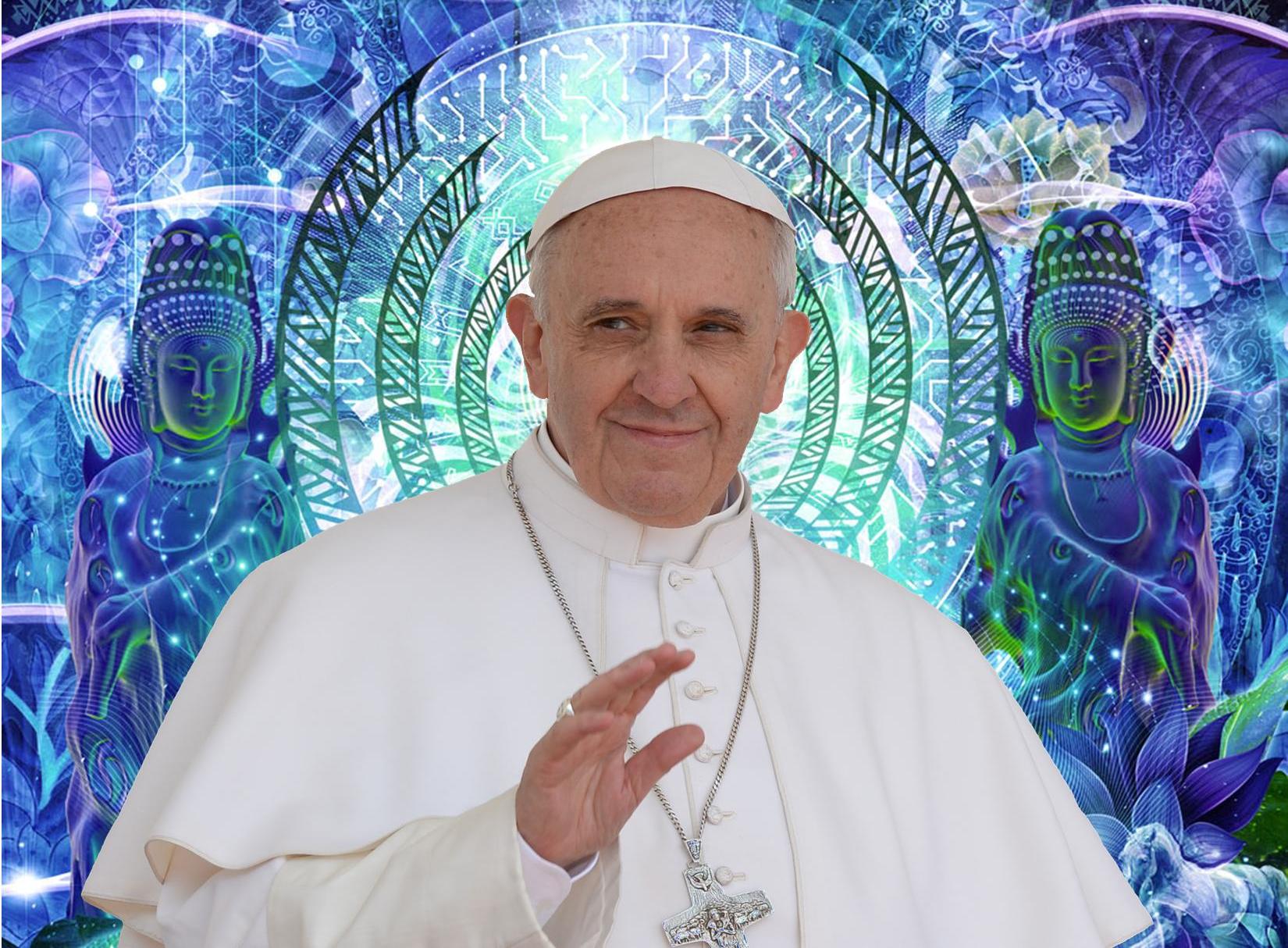 There are several reasons why Christianity is losing its biblical distinctiveness. One of the main reasons is that the church in the West is embracing the philosophies of the East. Through ecumenism and interfaith worship the Christian faith is being intertwined with pantheistic teachings. Rome is leading the way to promote the New Age, Eastern concepts so prevalent in Buddhism, Hinduism and other indigenous religions.

The Vatican has published an apostolic exhortation called ‘Querida Amazonia’ (Dear Amazon), signed by Pope Francis on February 2, 2020. This apostolic exhortation is the final report and conclusion to the Synod of Bishops for the Amazon region, held in Rome from 6 to 27 October 2019. Pope Francis lays out his pantheistic vision for the Amazonian region and beyond in ‘Querida Amazonia,’ which contains 111 sections in 4 chapters.

In Section #74 of ‘Querida Amazonia’ the Pope promotes ancient spiritualism, earth worship and animism. He basically says that the Creator is in all things. He is one with the materialistic world. According to Pope Francis, Jesus is equal to creation and one with nature:

Section #74. “Similarly, a relationship with Jesus Christ, true God and true man, liberator and redeemer, is not inimical to the markedly cosmic worldview that characterizes the indigenous peoples, since he is also the Risen Lord who permeates all things. In Christian experience, all the creatures of the material universe find their true meaning in the incarnate Word, for the Son of God has incorporated in his person part of the material world, planting in it a seed of definitive transformation. He is present in a glorious and mysterious way in the river, the trees, the fish and the wind, as the Lord who reigns in creation without ever losing his transfigured wounds, while in the Eucharist he takes up the elements of this world and confers on all things the meaning of the paschal gift.” [1]

This claim by Pope Francis is simply not true. This statement contradicts the clear statements of God’s word. The Pope’s apostolic exhortation is promoting classical pantheistic teachings. This is pure Mother Earth worship. The creation is being worshipped as the Creator (Romans 1:25).

Thanks to ecumenism, Christianity in being inundated with pantheistic teachings from the East. On every side, Eastern spiritualism is conquering the church. Why is this happening? What is the attraction? Why are the masses flocking to the God-is-everything philosophy?

Part of the reason why the West is embracing the religious beliefs of the East is because there isn’t a lot of moral emphasis. People are free to be whatever they want to be. All are one. All are accepted. New Age Eastern philosophy allows people to embrace everything. You can pray to Buddah, Jesus, Mohammed or Brahma because they are all one, and God is connected to all of them. You can pray to a rock, a mountain, a river or to a fish because they too are all one. Why? Because God is everything and in everything.

In addition to embracing Eastern philosophies, the churches are also engaging in Eastern rituals and practices. Ecumenism is Eastern philosophy on full display. All religions are one. All are equal. God is in every one of them. All religious faiths are just different expressions of the same God. No one is excluded. Not even witchcraft. [2] These ecumenical engagements are leading the world to worship at the altar of multiculturalism.

In this video you will see Indian women perform the Hindu ritual called Aarti in a Roman Catholic Church. The ringing of bells, the chanting, the offering of incense, the lighting of candles (fire) and the flower offerings are all part of the ancient Hindu religion. [3] This pantheistic celebration was offered during the so-called holy Eucharistic mass celebration in the Strasbourg Cathedral in France. Catholic Cardinal Giovanni Angelo presided over this ceremony that was an amalgamation of Hinduism and Catholicism.

In the video above, from WildFilmsIndia.com, you will see the same Aarti ritual being performed by devout Hindus as they make their offerings to the goddess, Maa Ganga, the holiest river in India. The celebrants use fire, ring bells, and throw flower petals as an offering to the river goddess.

The Solution to Pantheism and Ecumenism

The Bible rejects pantheism. God is not equal to nature, and we don’t honor God by worshipping the creation. Part of the last warning message that must reach every nation, kingdom, language and people is a call to worship the Creator, not the creation:

“Fear God, and give glory to him; for the hour of his judgment is come: and worship him that made heaven, and earth, and the sea, and the fountains of waters.” Revelation 14:7.

The Bible also rejects ecumenism. God doesn’t embrace all spiritualistic expressions. We cannot honor the Creator by engaging in multi-god worship services. Part of the last warning message to be given to the world is a call to leave the ecumenical family called Babylon – a community that has become the habitation of demons.

“And he cried mightily with a strong voice, saying, Babylon the great is fallen, is fallen, and is become the habitation of devils, and the hold of every foul spirit, and a cage of every unclean and hateful bird … And I heard another voice from heaven, saying, Come out of her, my people, that ye be not partakers of her sins, and that ye receive not of her plagues.” Revelation 18:2, 4.

The “oikos” (house) in “ecumenism” and the “oikeo” (to dwell in) in Babylon’s “habitation” have become the same gathering for all the religious belief systems in the world. “Ecumenism” is Babylon’s “habitation.” All are included. All are welcome. All are equal. Even demons are allowed. The modern ecumenical movement has truly become the Babylonian family of Revelation 18:1-5.

God’s command in Revelation 18:4 is a call to divide and not a call to dialog. If dialog leads to division then praise God! But if dialog leads to endless interfaith worship services, then we need to understand that we haven’t yet grasped the urgency of God’s message. God is calling for division. He is calling us to be separate.

Clearly, the final warning message for this time is to come out of Rome’s last-day, apocalyptic, Babylonian family. God’s people must remain separate from the Eastern, pagan, spiritualistic liturgy and rituals that prevail in the modern ecumenical movement. (Revelation 18:2, 4).