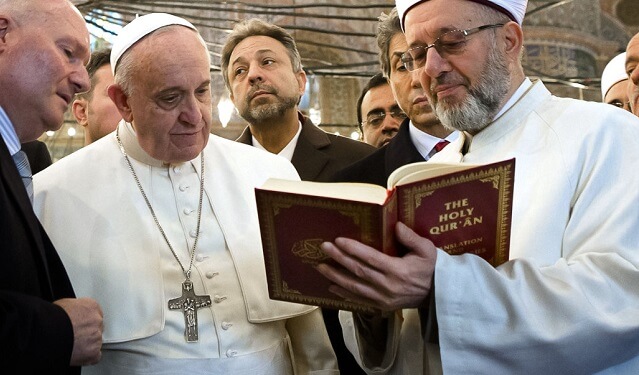 First, Pope Francis signed a declaration of peace on “Human Brotherhood” with the Grand Imam in Abu Dhabi, United Arab Emirates; then Pope Francis made a historic visit to Iraq and met with Ayatollah Ali al-Sistani, one of the most important Shiite Muslim religious leaders, and held an interfaith service with him to put aside their differences; now Iranian Muslims are expressing their approval of Pope Francis. Look at the following news reports showing how happy Iranians are with Pope Francis:

“Iranians are happy about the Pope-Sistani meeting, not the fundamentalists – Pope Francis’s visit to Iraq on March 5-8 has had several repercussions in Iran, especially the meeting between Francis, the leader of world Catholicism, and Ayatollah Ali al-Sistani, one of the most important Shia religious leaders … For many Iranians, the most important part of the trip was the pontiff’s visit to al-Sistani, which is of great value for peace in the region and the safety of Iraqi Christians. [1]

“A Muslim academic from Tehran, the capital of Iran, describes the event as “very important” because it brings together the head of the Church and “a great Shia leader.” In his view, “Peace is a message that must be spread all over the world and Ayatollah al-Sistani is a good choice to direct it to the Islamic world.” He is an “Islamic leader of peace and we hope that this will be emphasized in his meeting with the Pope and that it will be underscored by the media around the world.” [2]

Islam, with its 1.8 billion followers, has held back the papacy’s dream for global supremacy. During the Catholic Crusades (1095-1492), Rome was unable to conquer the Mohammedans. However, according to Bible prophecy, even this power must be subdued.

Truly, the whole world is wondering after the beast! That is precisely what we are seeing today. The prophecies of Revelation Chapters 13, 17, and 18 are taking shape, and this should make us aware of the signs of the times. The end is near. Prophecy warns us that when we see the great religious bodies uniting, this act will precede the final conflict in the great controversy. In this conflict God’s people cannot be neutral or ecumenical. Our message is even more necessary today than in the past. In fact, the closer we get to the end of time the more spiritually significant the Third Angels’ Message becomes.