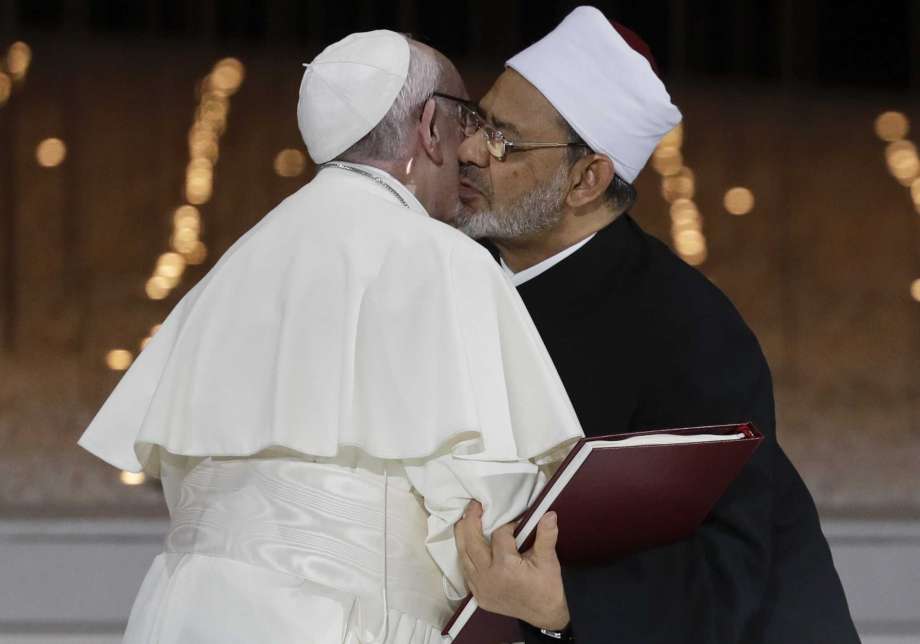 Islam, with its 1 billion followers, has checked and balanced the expansion of the Papacy’s final hope of achieving global jurisdiction. During the Catholic Crusades (1095-1492), Rome was unable to conquer the Mohammedans. Yet according to Bible prophecy, even this power must be brought into subjugation. For we read: “And all the world wondered after the beast.” Revelation 13:3.

This is precisely what we are seeing today. Just yesterday, 180,000 people gathered in the Muslim capital of the United Arab Emirates (UAE) to witness the first historic papal mass on the Arabian Peninsula. The local Arab media described the event this way:

“With the Mass — the first of its kind in the Gulf — broadcast across the Arab world, the event was a momentous occasion that united disparate communities.” [1]

Pope Francis was also in the Arab region to sign a historic document promoting interfaith dialog and cooperation with Muslims. Pope Francis and Sheikh Ahmed Al-Tayeb signed the “Human Fraternity Document” in Abu Dhabi, the nation’s capital. Sheikh Ahmed Al-Tayeb is one of the highest authorities in all of Islam. The third signer of the document was the Prime Minister of the UAE, Sheikh Mohammed bin Rashid Al-Maktoum. [2]

Here we see Muslim political and religious leaders coming together to pay respect to Pope Francis as a viable, legitimate, unifying authority. Under the reign of antichrist all powers must be brought to the knee of Rome. During the signing ceremony, Pope Francis reiterated his right to temporal power with the following words:

“There is no alternative. We either build the future together, or there will not be a future. Religions, in particular, cannot renounce the urgent task of building bridges between peoples and cultures.” [2]

The grand imam, Sheikh Ahmed Al-Tayeb, responded in behalf of Muslims with the following pledge to Pope Francis:

“The document is historic, and it calls for policymakers to stop bloodshed and conflict. Muslims must protect their Christian brothers. I will work with my brother and friend Pope Francis to protect all communities.” [2]

Radical, militant Muslims are becoming a thing of the past. Islam will soon no longer be a threat to the papacy. They will either submit or they will cease to exist. The only Muslims that will remain will be those that are ecumenical and only those who have yielded and surrendered to ecumenical Babylon.

Prophecy is being fulfilled before our very eyes in ways never seen before. During the rule of Papal Rome (538 AD to 1798) her influence was not global. Rome only ruled over parts of Europe, Asia and Africa. Today her influence is much more extensive reaching Europe, Asia, Africa, North America, Central America, South America, Australia, the South Pacific and now the Arab Peninsula.

Truly, all the world is wondering after the beast! With the conquest of Islam and Protestantism who will stand in the way of Rome’s global aspirations? Seventh-day Adventists? We had better stand up against Rome’s appeals for ecumenism and interfaith dialog. The one, great ecumenical family described in Revelation Chapters 13, 17 and 18 is now being formed, and this alone should make us conscious of the signs of the times.

The end is near. Prophecy warns us that when we see the great religious bodies uniting, this act will preceded the final conflict in the great controversy. In this conflict Seventh-day Adventist cannot be neutral or ecumenical. Our message is even more needy today than in the past. The third angel’s message is more true and necessary in this generation than it has ever been. Now is not the time to abandon our post and turn back. We must move forward with “the mighty, the most solemn, testing message ever given to the world” (Manuscript Release, Vol. 5, p. 314).