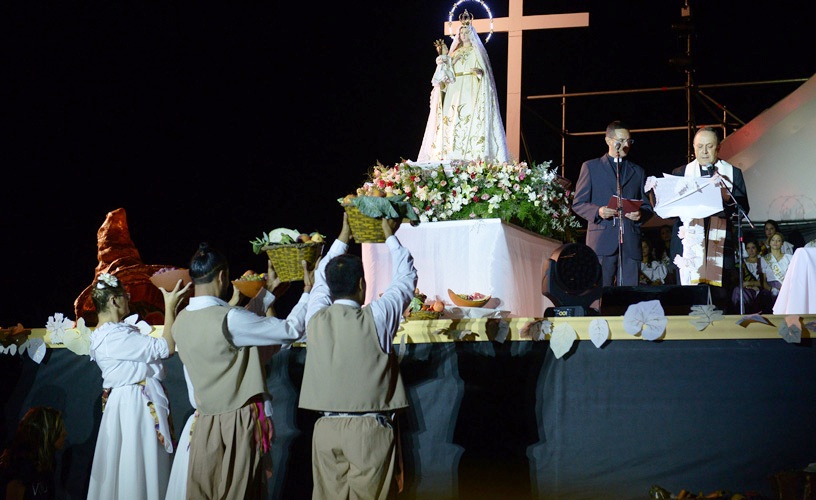 Offerings to the Virgin de la Carrodilla, another name for the Virgin Mary.

What business should Seventh-day Adventists have with the veneration of the earth, the veneration of the Virgin Mary, spiritualism, secular dancing, multicultural festivities, the blessing of fermented wine and multi-god worship services? What exactly are we trying to do in this world? Are we really trying to reach every person on earth with the everlasting gospel in the context of Revelation 14:6-12? Or are we no longer preparing people for translation to heaven at the second coming of Christ?

During the interreligous service, a pagan woman fans smoke with a feather while asking a blessing upon the harvest. [1]

Earlier this year, more than 6,000 people gathered at the Pope John Paul II Greek Theater in the Agnesi Park of San Martin, Mendoza Province, Argentina, to celebrate the start of the 2020 National Harvest Festival and the Blessings of the Fruits. This is an annual celebration that unites all people in the city of San Martin. This festival is a mix of cultural activities, wine drinking, beauty pageants, worldly music, secular dance and an ecumenical worship service that invokes different gods, including the Virgin Mary and Mother Earth. 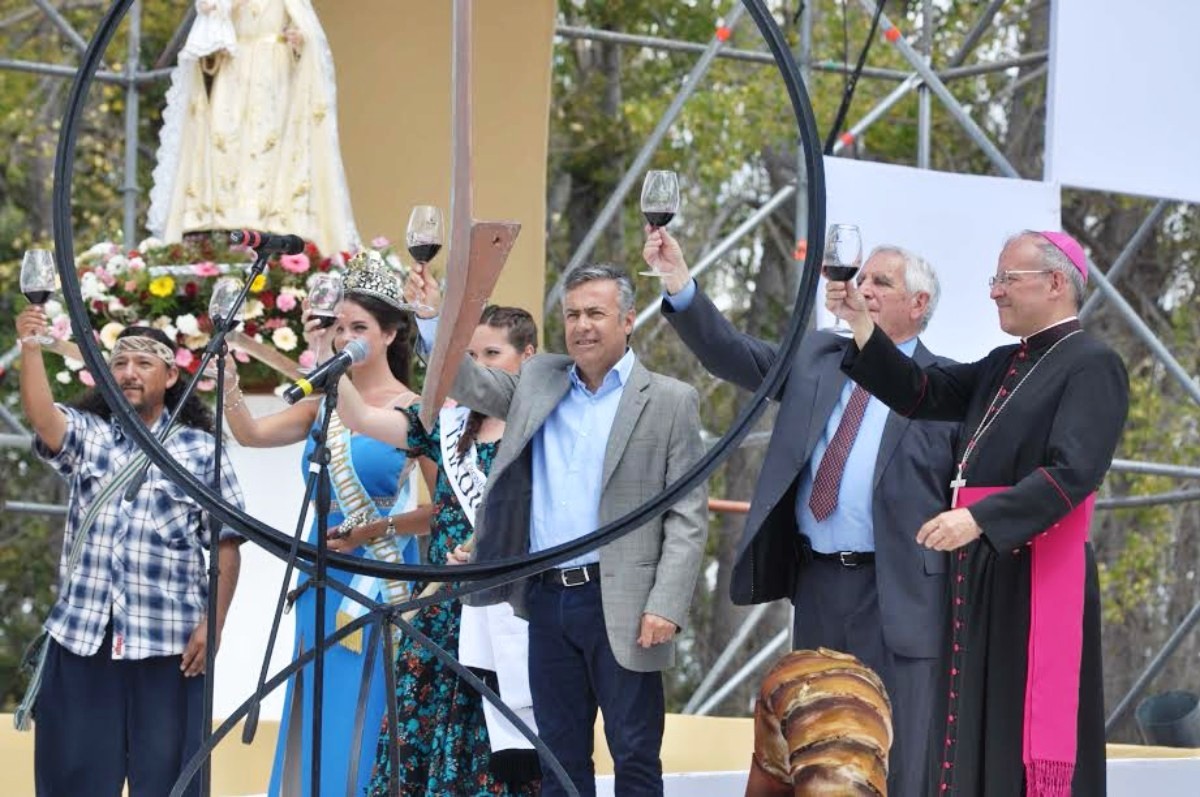 “The Blessing of the Fruits aims to give thanks for the harvest and deliver the new wine to the patron saint of the vineyards, the Virgen de la Carrodilla (another name for the Virgin Mary). But it is not only an offering to the Virgin, but also to all the creeds of our land.” [3]

You can see women dancing with wine glasses in the background during Earth Harvest 2020.

In addition to the “invocation of God” during what the media describes as a “big party,” more than 100 dancers performed different styles of dance, from contemporary to traditional. [4] Thousands come together every year during this event to give thanks to the “earth.” [5] Today we are seeing a revival of pantheism, a philosophy that tells us that nature is equal to God and must be venerated. This is a resurrection of the same deadly heresy that Ellen White warned would come again among our people (See Selected Messages, Book 1, p. 200). 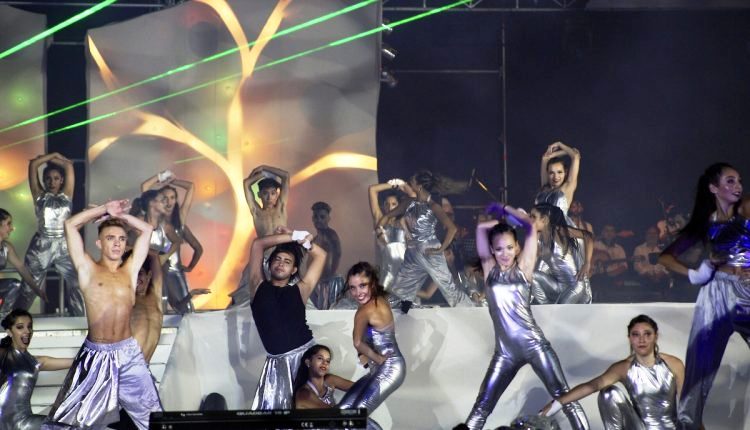 The event features both traditional and contemporary dancing. [6]

Not only is pantheism being embraced and celebrated at this event, but we also see a union of the Babylonian family described in the book of Revelation. Government leaders (“kings of the earth” Revelation 18:9), business leaders (“merchants of the earth” Revelation 18:11) and religious leaders representing Christianity and paganism (“Harlot and daughters” Revelation 17:5) are coming together to embrace spiritualism. The Earth Harvest 2020 event culminated in a great worship service in which Roman Catholics, Seventh-day Adventists, Evangelicals and pagan religions gave their blessings “in accordance with their respective beliefs.” 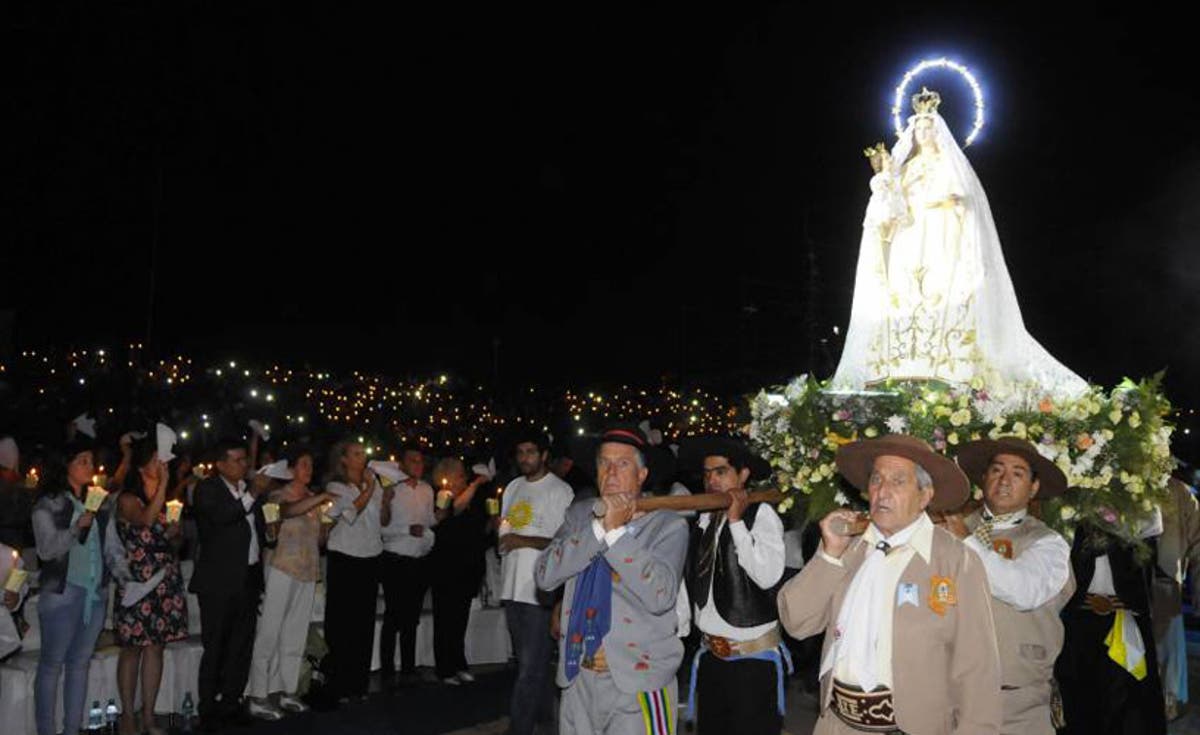 “The entrance of the Virgen de la Carrodilla (Virgin Mary) gave a break in artistic development to make way for the liturgy. At that time, the Mendoza Interreligious Council, headed by members of the Catholic, Jewish, Adventist, Mormon, Evangelical, Hare Krishna, and Native communities, gave blessings according to their respective beliefs. ‘It is an opportunity to celebrate the providence of God that is manifested in the fruits of the earth and in the work of man,’ said Marcelo Colombo, Archbishop of Mendoza, after blessing the fruits arranged on stage with water.” [7] [8]

“After the show, the traditional ecumenical religious ceremony was held in which the fruits of the seasons for this Harvest were blessed. Members of the Interreligious Council of the province were in charge of this act, representing different faiths and communities.” [9] 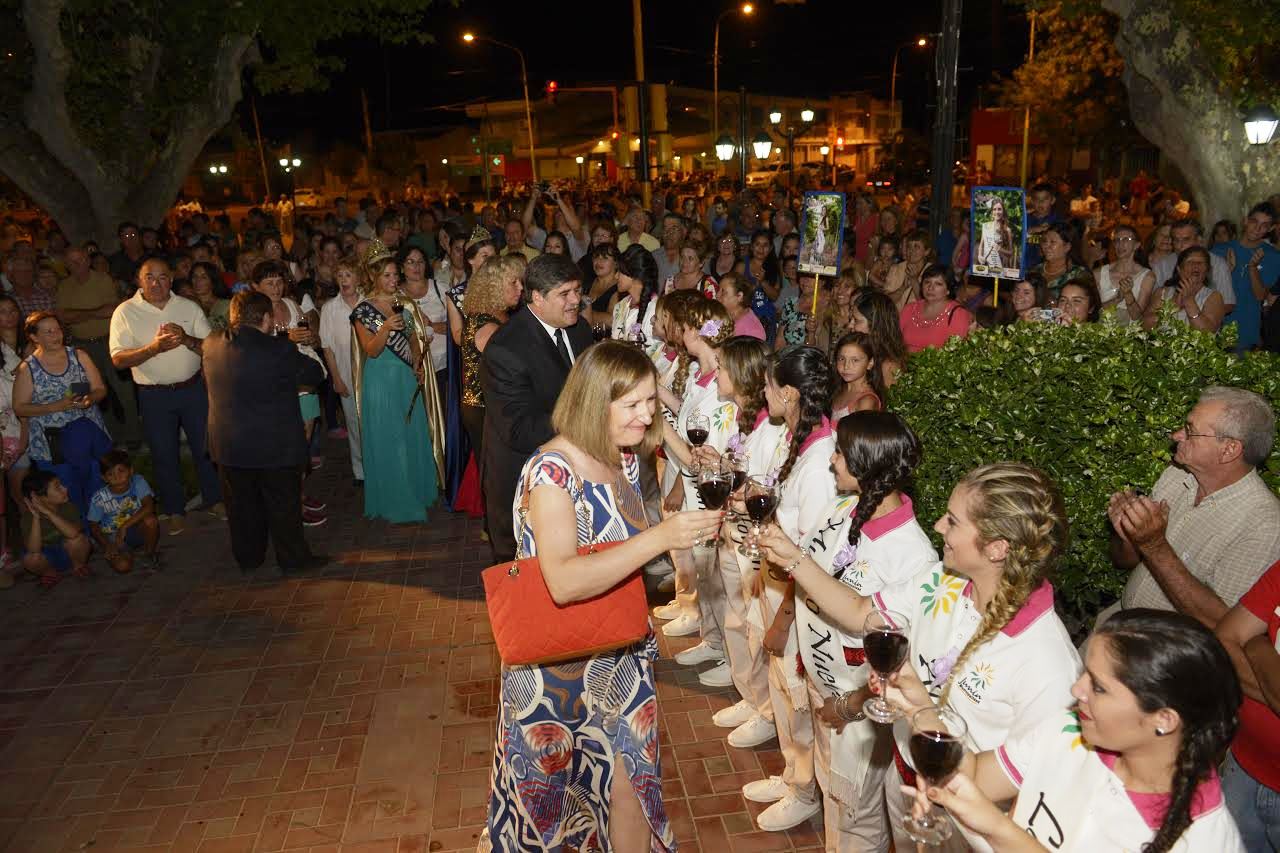 We are rapidly becoming a people who are losing our unique identity. We are fast becoming just another church among hundreds and thousands of religions in the world. Ecumenism, interfaith relationships and spiritualism are the modern-day “Apostasy at the Jordan River” experience that is described in Leviticus 25:

“And Israel abode in Shittim, and the people began to commit whoredom with the daughters of Moab. And they called the people unto the sacrifices of their gods: and the people did eat, and bowed down to their gods. And Israel joined himself unto Baal-peor: and the anger of the LORD was kindled against Israel” Numbers 25:1-3.

When the nation of Israel camped on the banks of the Jordan River in preparation for crossing into the Promised Land, they fell into idolatry by joining the Moabites with music, dancing and worship of false gods:

“Beguiled with music and dancing and allured by the beauty of heathen vestals, they cast off their fealty to Jehovah. As they united in mirth and feasting, indulgence in wine beclouded their senses and broke down the barriers of self-control. Passion had full sway; and having defiled their consciences by lewdness, they were persuaded to bow down to idols. They offered sacrifice upon heathen altars and participated in the most degrading rites” (Patriarchs and Prophets, 454).

In the above video, you will see part of the abominable interfaith worship service during the Earth Harvest 2019 event. You will see spiritualism on full display.

We are being seduced with carnality and with temptations that are pleasing to the eyes. Our senses are being shocked. And it is troubling that our churches defend these ecumenical activities. Ecumenism is becoming more and more popular with its ever-increasing apostasy. Ganoune Diop, Public Relations Director at the General Conference, defends this apostasy. He encourages this behavior in our church publications. [10] Sadly, our people are suffering from amnesia. We have forgotten that the three angels’ messages warn against identifying with these forces of apostasy. Revelation 14 is a call to come out of sin and rebellion. It is a call to reject the wine of Babylon, both literally and spiritually.

In presenting the final message of mercy to the world, Seventh-day Adventists must recognize that our message requires repentance and a change in direction from what the world does. It is a call to choose between Christ and Satan. It urges people to accept the commandments of God and the faith of Jesus (Revelation 14:12) and reject lawlessness, revelry, drunkenness, false gods, spiritualism and sin. 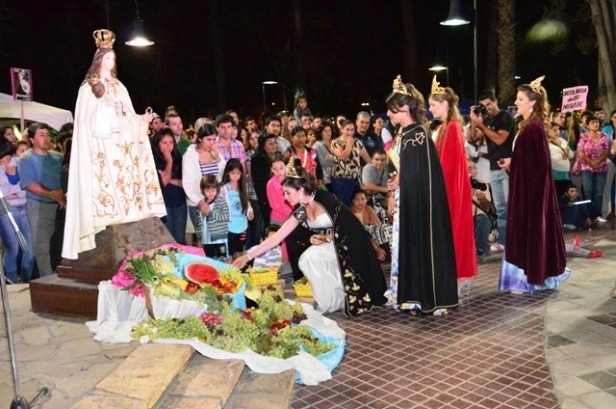 Our message cannot be presented with words alone, because our literature says one thing and our people do another. Our message must be verbal and visible. In other words, people should see us practice what we preach. The life, work and character of the church must reflect what the gospel says in the Holy Scriptures. The problem today is that the messages of Revelation 14 are being disregarded. Many have rewritten them and replaced them with what we think sounds good. We have created a gospel in our own image instead of being conformed to the will of God by His message.

In Revelation 14:14-18 we see the climatic event of the ages announced – the second coming of Christ and the gathering of the true grapes (God’s people) into heaven. Prior to this announcement we find God’s unique, undefiled and distinct people who will be standing apart from the rest of the world: “Here are they that keep the commandments of God, and the faith of Jesus” (verse 12).

God will have a people who will both live and proclaim His message. Tragically, some don’t want to share this message. Sadly, many would rather give a non-threatening, non-controversial message that doesn’t address the great moral issues of this generation. Unfortunately, we have not cast off the Laodicean condition that is paralyzing our true mission and message. But, thank God, not everyone will join the world in its idolatrous festivities. Not everyone wants to join these ungodly amusements. Some will fulfill the gospel commission and be used to finish the work. Truth will ultimately triumph, and we praise God that John the Revelator saw the victorious saints on the sea of glass in heaven (Revelation 15:2).

“God will have men who will give the message of warning in this age of the world. All will have sufficient light to accept the saving truth, obey God’s requirements in keeping all His commandments, and be saved” (Manuscript Release, Vol. 5, p. 314).

“The light of the gospel shall extend to every soul upon the earth” (Thoughts from the Mount of Blessing, p. 42).

“Everyone is to have sufficient light to make his decision intelligently” (Great Controversy, p. 605).