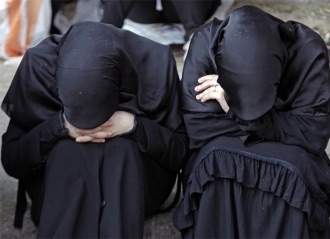 Saying “Talaq” (I divorce you) three times to your Muslim wife will instantly divorce you and make you free to find a new wife under Sharia Law.

This is a controversial way that many Muslim men are using to get rid of their wives, literally and for any reason. Anytime a Muslim husband says to his wife the “triple-Talaq,” under Sharia Law they instantly divorced and the woman can be thrown out of the house and into the streets without any protection, rights or recourse.

The now ex-wife is not entitled to alimony or any kind of support. The men are not obligated to take care or provide for them, since they are free to find a new wife to love and support. Sadly many of these divorced women will be rejected by Islamic societies as unworthy.

With the advent of technology, many Muslim men are divorcing their wives through social media! Two men recently divorced their wives and had them thrown out of their homes after texting them through “WhatsApp,” a social media platform, the dreadful sentence of “Talaq, Talaq, Talaq.”

No attorneys, no mediator, no arbitrator, no one representing the children, no one speaking up for the wife, no judge, no appeal, no religious counseling, no marriage counseling – nothing to protect women!

This is Sharia Law (Muslim law). These are rules written to benefit the men only. Divorced by social media? Unbelievable. These so-called religious leaders are just making up the rules as they go along. Yet these unjust decisions are upheld by Islamic courts.

There is a movement to bring Sharia Law to America. Radical Muslim terrorists and their sympathizers are fighting a worldwide conquest with the goal of establishing Sharia Law. Without discriminating against anyone, we need to be vigilant and make sure to keep Sharia Law out of America. And to these poor divorced women, “Move on, move on, move on” because those so-called husbands aren’t worth your time.

We cannot make up our own rules, we need to follow God’s plan for our lives and wives.

“So ought men to love their wives as their own bodies. He that loveth his wife loveth himself.” Ephesians 5:28.

“Likewise, ye husbands, dwell with [them] according to knowledge, giving honour unto the wife, as unto the weaker vessel, and as being heirs together of the grace of life; that your prayers be not hindered.” 1Peter 3:7.

“Husbands, love your wives, even as Christ also loved the church, and gave himself for it.” Ephesians 5:25.

“Husbands, love [your] wives, and be not bitter against them.” Colossians 3:19.