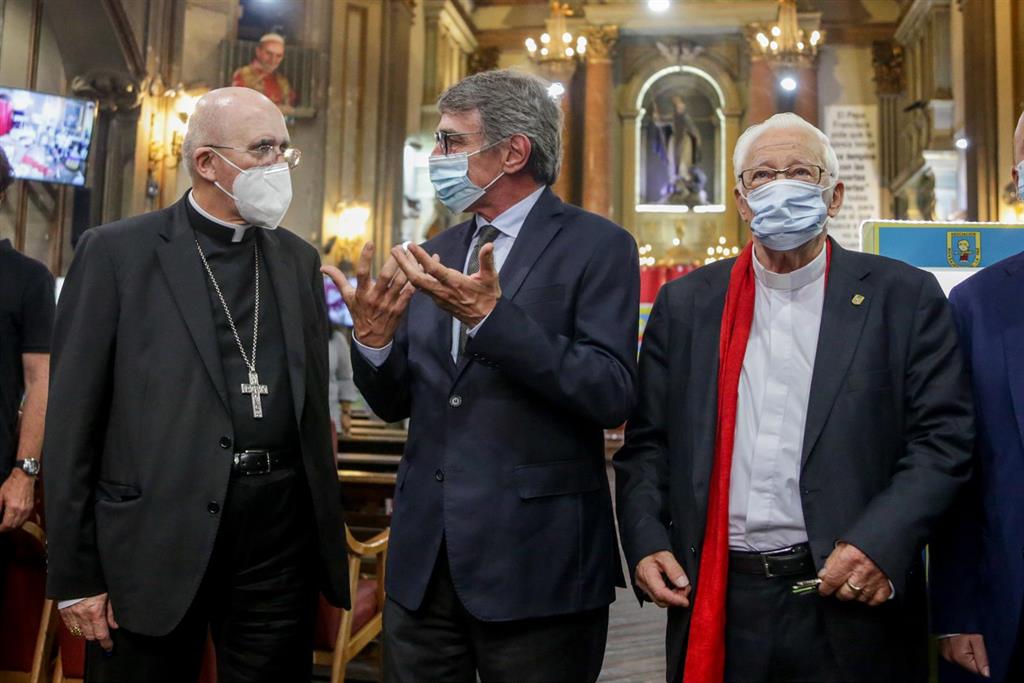 Left to right: The Archbishop of Madrid, Carlos Osoro; the President of the European Parliament, David Sassoli; and Catholic Priest Angel Garcia Rodriguez, in the Catholic Church of San Antón, in Madrid, Spain on July 15, 2020.

“And the woman which thou sawest is that great city, which reigneth over the kings of the earth.” Revelation 17:18.

The Bible clearly predicts that Rome would seduce and control the kings of the earth to make them carry out her wishes. This prophecy describes the global influence that Babylon would have over the nations of the world. We can clearly see the fulfillment of these words today. On July 16, 2020, David Sassoli, President of the European Parliament, was in Madrid, Spain, attending a state ceremony to commemorate the victims of COVID-19. [1] But before participating in this important engagement with world leaders, on July 15, 2020, President David Sassoli first went to pay tribute to the local Archbishop, Carlos Osoro, the pope’s representative in Madrid. [2] 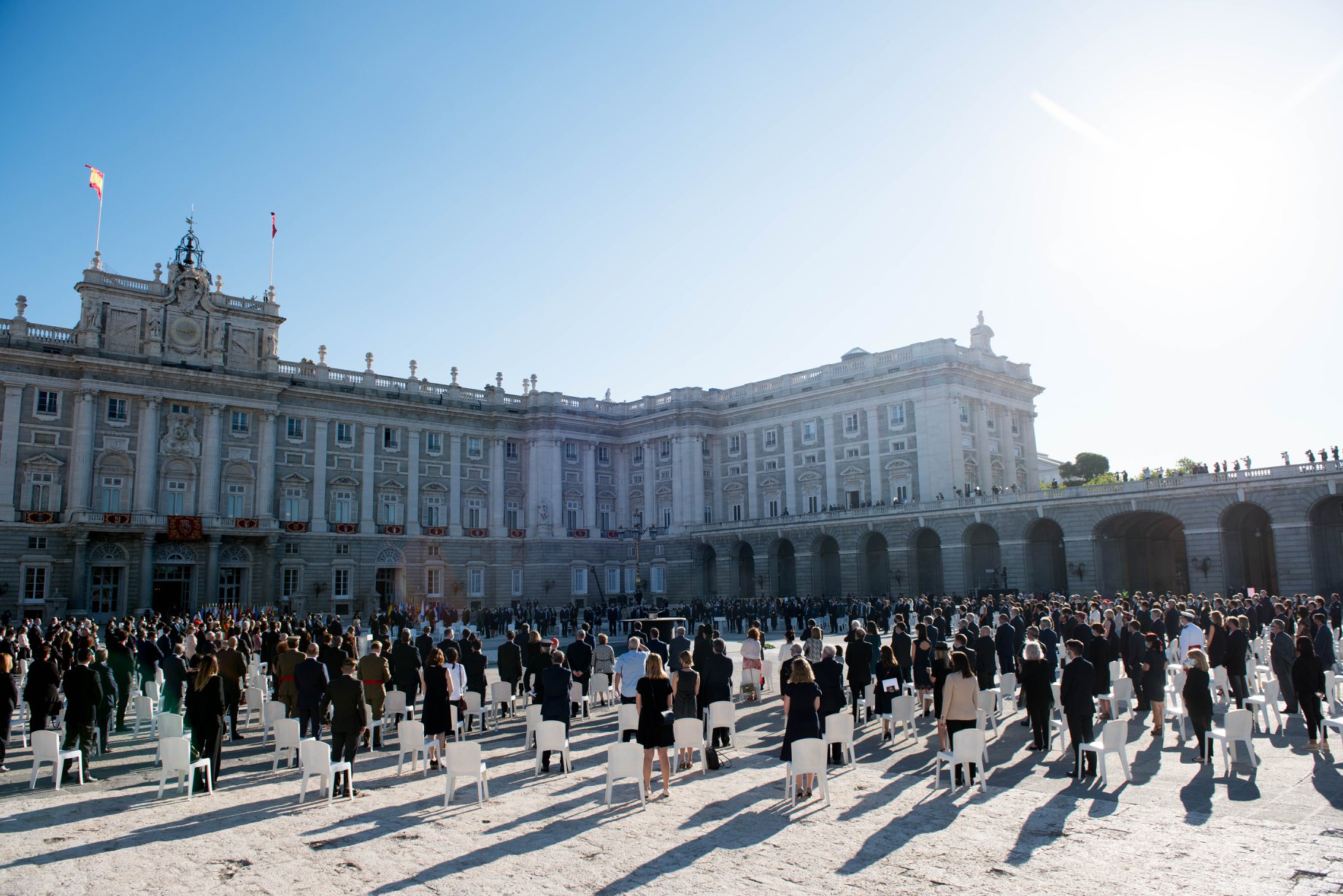 The President of the European Parliament, David Sassoli, was in Spain with world leaders during a COVID-19 commemoration ceremony on July 16, 2020.

Is it just a coincidence that prominent political leaders are first paying their respects to Rome before getting involved in global affairs? No way. Religious leaders are already doing this. Under the coming reign of the Antichrist, all political and religious powers must be brought to the knees of Rome. Rome is asserting its right to be the only temporal power in both religious and political matters:

“These [kings] have one mind, and shall give their power and strength unto the beast. These shall make war with the Lamb, and the Lamb shall overcome them.” Revelation 17: 13, 14.

The kings of the earth are surely giving their power and strength to the beast. So who is David Sassoli? He is the President of the European Parliament, the legislative branch of the European Union (EU). And David Sassoli came to publicly pledge his cooperation with Rome. The Roman Catholic Diocese of Madrid reported that Mr. Sassoli “wanted to meet” with the Archbishop before attending his political duties with world leaders. [2] 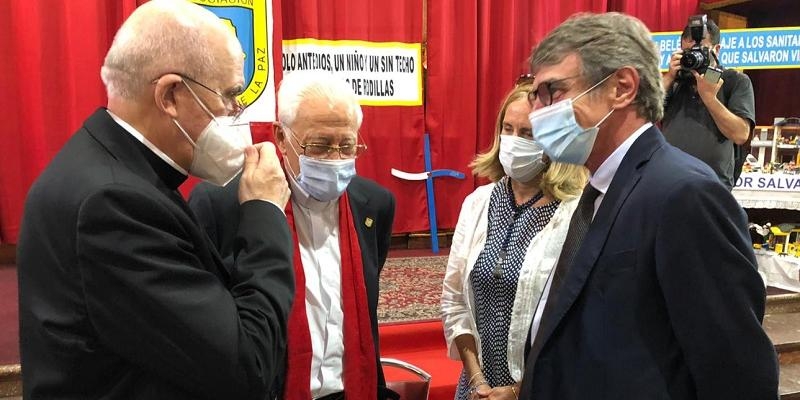 As President Sassoli met with the Archbishop Carlos Osoro, he spoke of a “mandatory solidarity” and the need for politicians to “listen” to the people. [3] The problem is that these politicians are listening to the agents of Rome instead of the people. The Archbishop’s job is to communicate the public policies of the Vatican, such as Laudato Si, to politicians and government leaders. Archbishops do not represent the people; rather, they represent the voice of the Vatican. They exist to deliver the legislative agenda of Rome to the kings of the earth. These kinds of political engagements are helping to increase the power and global influence of the Roman Catholic Church:

“The sins of Babylon will be laid open. The fearful results of enforcing the observances of the church by civil authority, the inroads of spiritualism, the stealthy but rapid progress of the papal power—all will be unmasked” (Great Controversy, p. 606).

“When the churches of our land, uniting upon such points of faith as are held by them in common, shall influence the State to enforce their decrees and sustain their institutions, then will Protestant America have formed an image of the Roman hierarchy” (Spirit of Prophecy, vol. 4, p. 278).

When world leaders make political commitments to Rome, this will lead to the systematic dismantling of all our freedoms. They are working to revoke the constitutional rights of sovereign nations, and soon all of our freedoms will disappear. It would be in everyone’s best interest if politicians were to completely sever their association with all Vatican-led organizations that exist only to use their power and influence to control our political systems.

As Seventh-day Adventists, we must continue to give the third angel’s message, which warns against the “image of the beast” – when civil powers enforce the teachings of the church. This is the heart of the whole matter during the final crisis, which proves once again that the message ordained by God to be given in these last days is relevant, applicable and a necessary warning to everyone. The entire world is turning to the beast for truth, light and direction when we have been given the mission to turn people’s attention to God — to worship the Creator, and not the beast, to keep God’s commandments and not the commandments that were changed by the Antichrist!