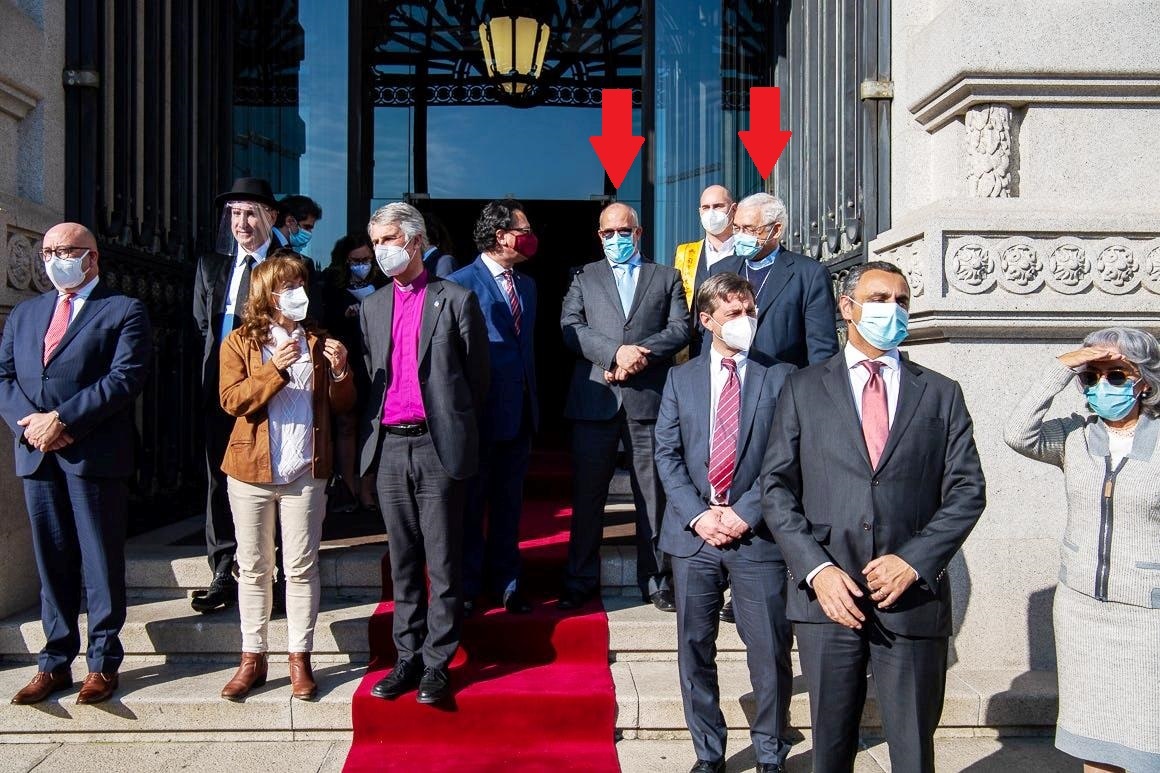 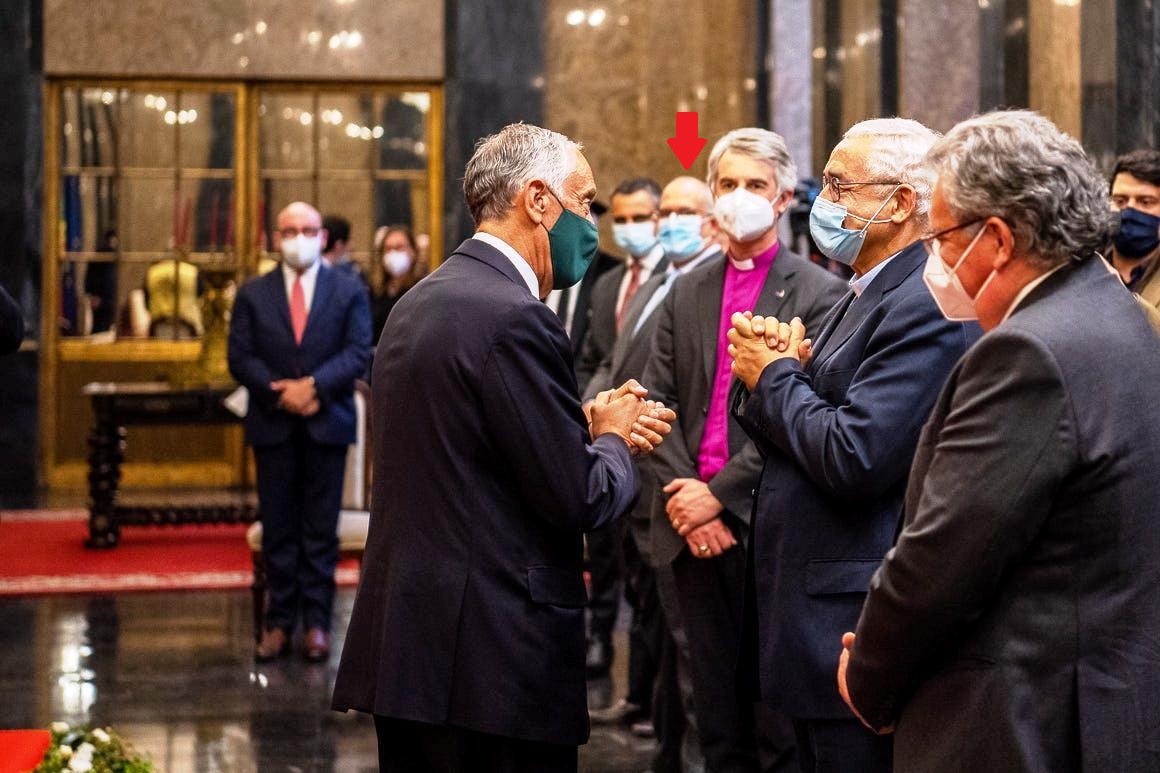 Then President Sousa gave the following mandate to the churches:

“I appeal that, in a healthy dialogue and convergence of purposes, we do everything to defend freedom, tolerance and mutual understanding, in a time when that it is so seductive to divide and catalog, to find scapegoats, to accuse without foundation, to marginalize without humanity.” [1] 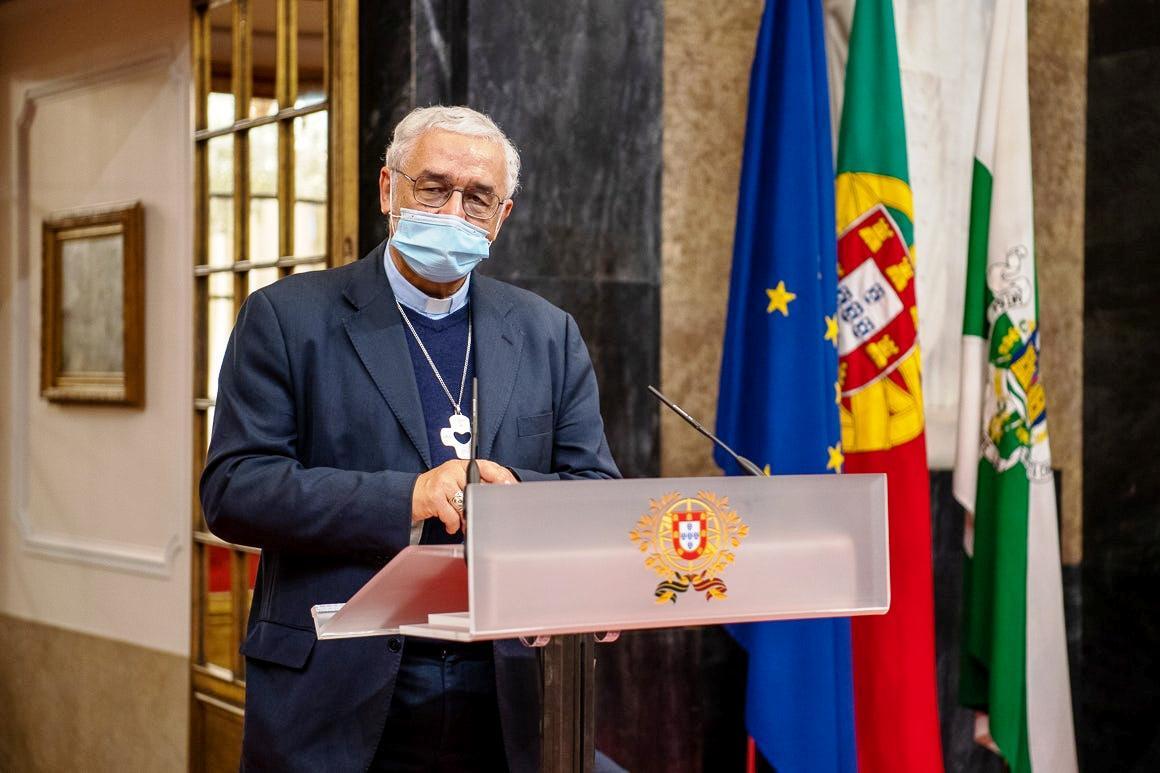 To make it clear what President Sousa was referring to by his calls for ecumenism, a leading Roman Catholic bishop expounded on this same message. The Roman Catholic bishop and president of the Portuguese Episcopal Conference, Rome’s highest administrative body in Portugal, also spoke at the ecumenical meeting and expressed the following on behalf of all faiths represented, including Seventh-day Adventists:

“Words that found an echo in the intervention of D. José Ornelas, president of the Portuguese Episcopal Conference and Bishop of Setúbal, who expressed, on behalf of all representatives of the different religious beliefs present at the ceremony, ‘the commitment to building solidarity and peace, from faith to overcome the pandemic virus, and from others that also divide and destroy us’.” [1] 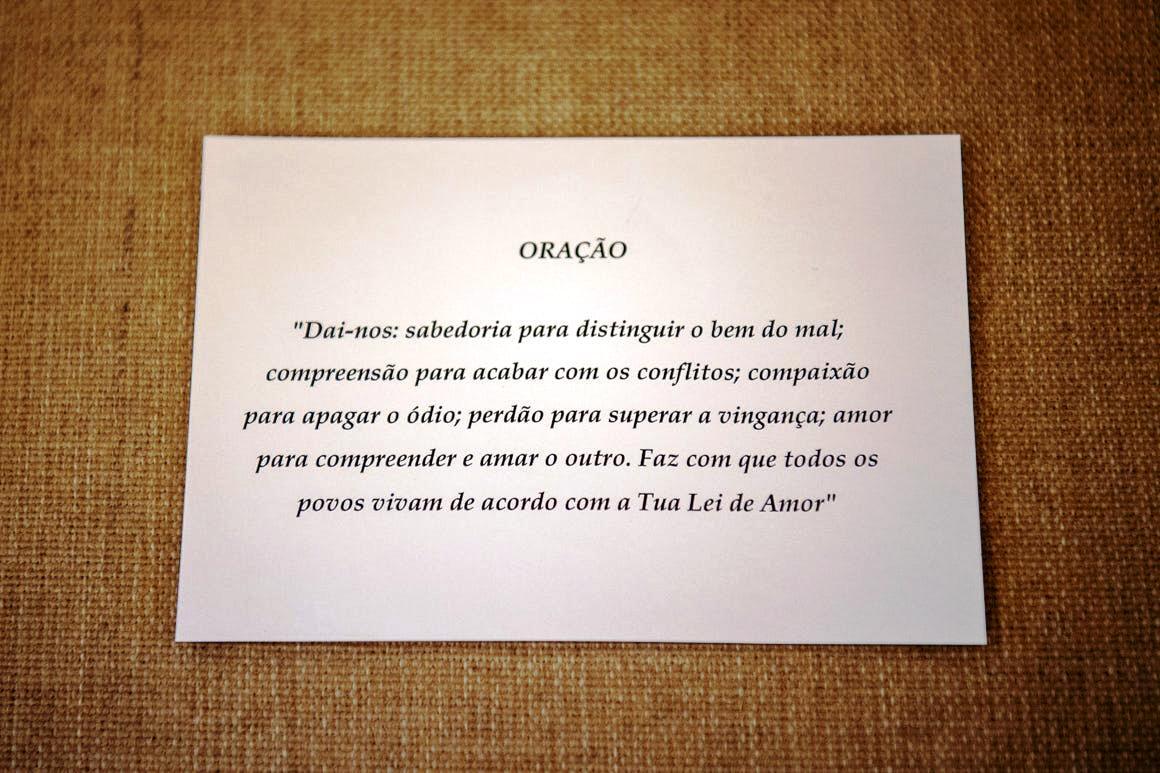 The ecumenical prayer that all the participants recited together in solidarity.

Each participant was given a prayer card that was recited together. The prayer card says:

“Prayer – Give us: wisdom to distinguish good from evil; understanding to end conflicts; compassion to erase hate; forgiveness to overcome revenge; love to understand and love the other. Make all peoples live according to Your Law of Love.” 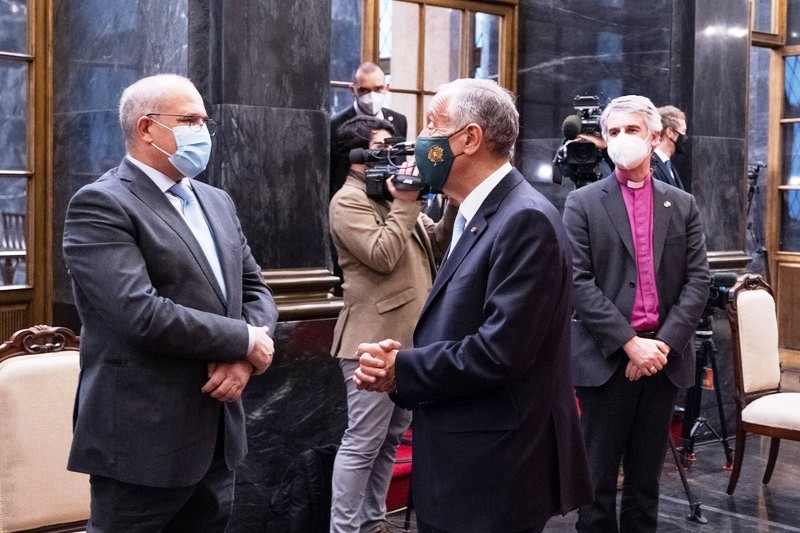 President of the Adventist Church in Portugal António Amorim (left) is greeted by the President of Portugal, Marcelo Rebelo de Sousa (center).

Today there is a voice that calls on everyone to come together in solidarity at this time of pandemic. This is the voice of Pope Francis. This event is Fratelli Tutti in action. The human brotherhood that Pope Francis is creating is leading the world to a universal consensus. They call it the “Law of Love”, but they do not refer to the Ten Commandments. 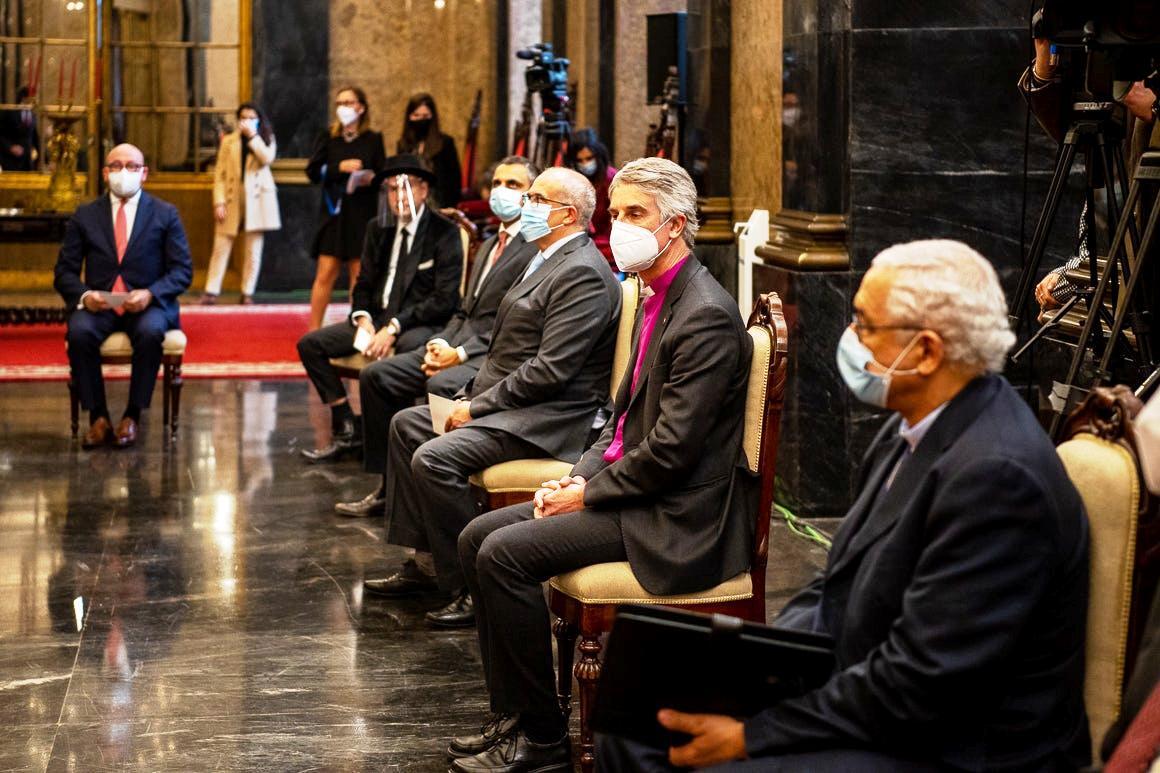 A top Roman Catholic (right) seated with the top Seventh-day Adventist (third from right) in solidarity in Portugal.

This work is undermining the Adventist foundation. Our banner is the Commandments of God and the faith of Jesus, which is an expression of true godly love. That message is contained in the Three Angels’ Messages. This is the foundation on which the Seventh-day Adventist movement stands.

Our God has entrusted us with the mission of announcing to the world the everlasting gospel of Revelation 14:6-12. We must evangelize and stand firm in the preaching of this message. This is what society needs to hear right now. But what is happening is that many of our leaders are diluting the message with all these calls to ignore biblical truth, forget about sin and focus on solidarity. 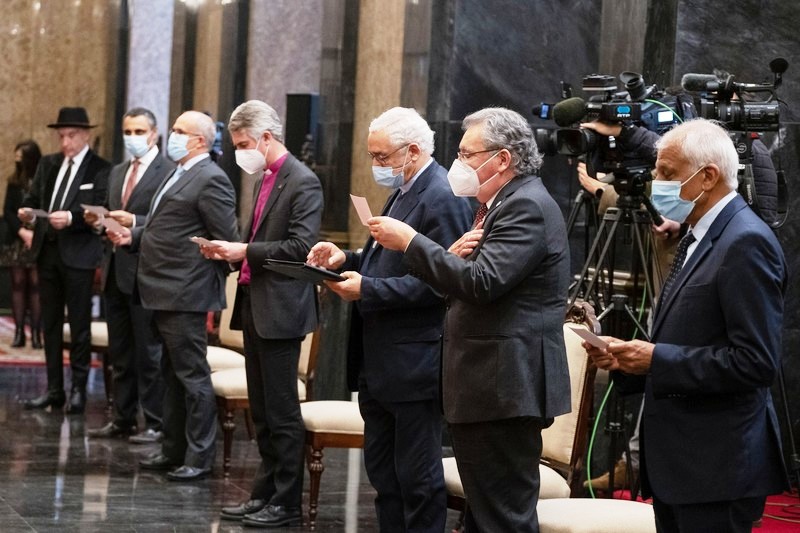 That is why many of our leaders no longer emphasize the Three Angels’ Message clearly to the world. That is why they reject books like the National Sunday Law that warn against the beast, the image and the mark. The leadership is trying to accommodate our message with this universal brotherhood led by Pope Francis, who says that we all must be united if we want to survive. Rome is putting unity and solidarity before truth and duty.

The above verses tell us that in all this world there is no sure foundation other than the word of God. When we begin to accept Rome’s call to unite, we do so on the basis of human tradition, ecumenism and pandemics; not on the basis of the word of God. When our leaders cross the gulf to the other side with Rome, they are stepping off the foundation of Protestant Adventism. And once we obey the Pope’s call to unite, there is no good reason not to start accepting all of his traditions, doctrines and spiritual authority.

“Hear the word of the LORD, ye children of Israel: for the LORD hath a controversy with the inhabitants of the land, because there is no truth, nor mercy, nor knowledge of God in the land.” Hosea 4:1. 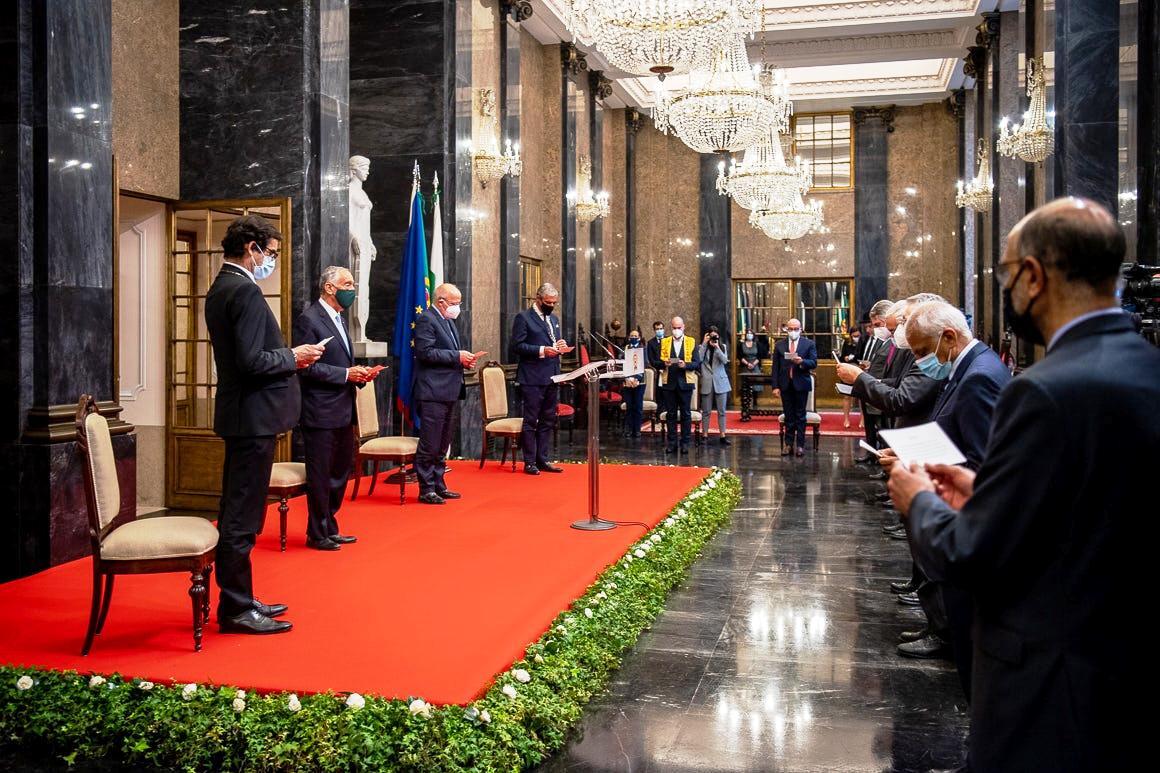 Political and religious leaders reading the same prayer together as a universal brotherhood.

We are abandoning our faith in the Three Angel Messages, particularly the Second Angel’s Message, which caused our pioneers to “come out” of these churches in the first place. Now, we build solidarity with them while denying our foundation. When we reject the foundations of what makes us a people, we are left without faith and without purpose. We are helpless against the deadly temptations of Satan. We end up drifting towards Rome and towards relativism.

Our conceptions of the truth are being destroyed. The poison of ecumenism has replaced the gospel. Now we no longer want to offend anyone. Now we have to validate each belief system. Now we have to recognize all the deities. Now we need to revise our views on prophecy, the mark of the beast and the controversy between Saturday versus Sunday. Now we have to shift our spiritual emphasis to the desires of the world and thus dilute the gospel.

Our literature says one thing and our people do another. Our message must be verbal and visible. In other words, people should see us practice what we preach. The life, work and character of the church must reflect what the gospel says in the Holy Scriptures. In Revelation 14:14-18 we see the climatic event of the ages announced – the second coming of Christ and the gathering of the true grapes (God’s people) into heaven. Prior to this announcement we find God’s unique, undefiled and distinct people who will be standing apart from the rest of the world: “Here are they that keep the commandments of God, and the faith of Jesus” (verse 12).

Sadly, many would rather give a non-threatening, non-controversial message that doesn’t address the great issues found in the Three Angels’ Messages. Unfortunately, we have not cast off the Laodicean condition that is paralyzing our true mission and message. But, thank God, not everyone will join the world in its idolatrous festivities. Not everyone wants to join these ecumenical gatherings. Some will fulfill the gospel commission and be used to finish the work. Truth will ultimately triumph, and we praise God that John the Revelator saw the victorious saints on the sea of glass in heaven (Revelation 15:2).