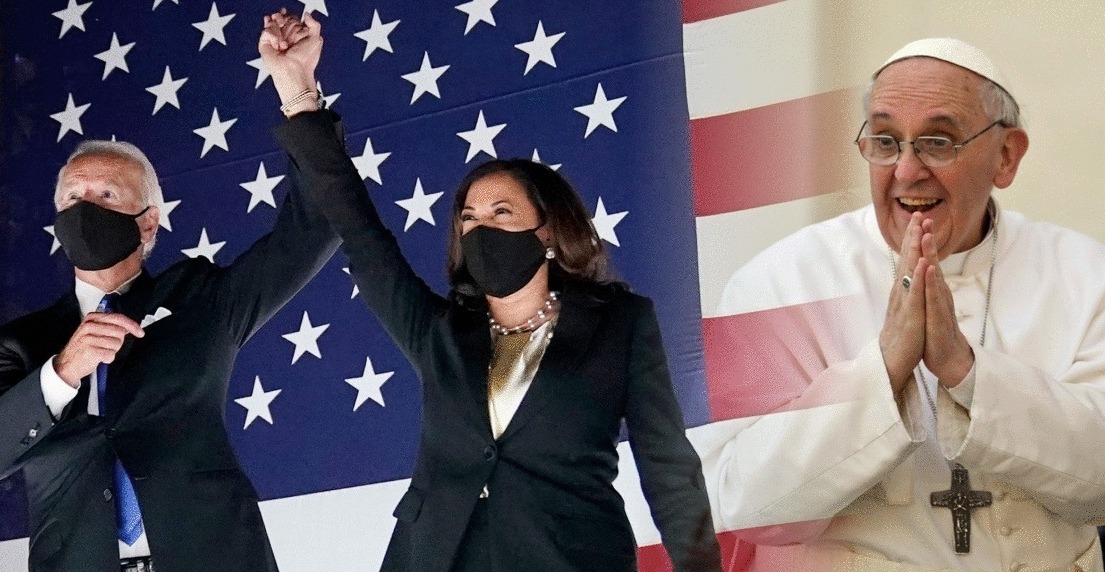 “And I saw one of his heads as it were wounded to death; and his deadly wound was healed: and all the world wondered after the beast.” Revelation 13:3.

The Vatican just published a message to the United States on January 19, 2021 on the eve of the swearing-in ceremony of the 46th President of the United States, Joe Biden. The message was titled: “Time to heal wounds in the United States.” [1] But let’s be clear, Rome isn’t just talking about “healing” America of its political and social divide. No, they are talking about repairing international relations and healing the earth’s climate crisis with Laudato Si’. Notice what the Vatican is calling for:

“Besides the internal theme of “healing” the American society, there is also the external front, on which the international spotlight is focused. After years often marked by unilateral decisions or bilateral agreements, there are, in fact, great expectations for a “return” to multilateralism in foreign policy and a recovery of the relationship of trust with international organizations, starting with the UN. Some steps in this direction have already been announced in recent weeks, such as the return of the United States to the Paris Climate Agreement. This move converges with Pope Francis’ commitment in favor of the custody of our Common Home expressed in Laudato si’. [1]

Oh, so what was the crime of Donald Trump that the entire world has rejected him like the plague? Donald Trump did not start any war, he put the nation in the best economic conditions that had not been seen in decades, he was forging international peace in the Middle East and he did not take away any of our freedoms. So what was his crime? He did not carry out Laudato Si’. You see, in May 2017, Pope Francis personally gave Donald Trump a copy of his encyclical, Laudato Si’, which calls for strong action to address the climate crisis. [2]

And Donald Trump did not comply with the instruction. In fact, a month later, in June 2017, Trump announced that he was pulling the United States out of the Paris climate agreement. Donald Trump has questioned the science behind the climate change accord and the economic impact it would have on the United States, but more importantly, Rome’s climate agenda had a Sunday Law rest provision.

So now Rome is celebrating that Joe Biden, the pro-abortion, pro-LGBT+, pro-Fratelli Tutti and pro-Laudato Si’ candidate, will be sworn in as the next president of the United States. Now the Vatican is calling on our nation, telling us that it is time to heal the wounds, all the wounds, both national and international. Rome not only mentions Laudato Si’, but also quotes Fratelli Tutti in its message to America. Notice what the Vatican went on to say:

“This awareness must not just remain an utterance but – quoting Fratelli Tutti, – requires a concrete effort at all levels. It requires a commitment not only from political leaders, but from all the people, and their movements, to promote the common good and strengthen democracy. This is even more true today, in a historical period in which, despite centrifugal forces and nationalistic interests, the pandemic has dramatically shown that “no one is saved alone“. [3]

The Vatican says the pandemic has brought us together. The pandemic has done more to threaten our civil and religious liberties, and Rome is exploiting this. When the government becomes god, you don’t have the ability to disagree with what the government imposes, be it mask mandates, lockdowns, social distancing, church closings or vaccinations. Nothing the government does is morally wrong, because they think they are always right, even when they are blatantly wrong.

This is what Nimrod established in Genesis 10 and what King Nebuchadnezzar did in Daniel 3. This is what the popes did in the Dark Ages with the Holy Inquisition. And this is the prophetic stage that is being set before our eyes. Remember, Rome received a deadly wound, but this wound is being healed today.

In 1798, at the height of the Protestant Reformation, Napoleon took the pope prisoner and left the seat of the Papacy empty and without a successor. This nearly destroyed the Papacy as the entire world thought this system had come to an end. But not so, for the prophetic pen of inspiration warned that Rome would rise again:

“And I saw one of his heads as it were wounded to death; and his deadly wound was healed: and all the world wondered after the beast.” Revelation 13:3.

This “deadly wound” began to heal when our modern world began to praise and admire Rome by “wondering” after her. This “wondering” has only increased, thanks to 60 years of ecumenism. Protestantism for the most part is dead and is no longer a threat to Rome. Donald Trump, who was a threat, like Napoleon, has been removed. According to Bible prophecy, Rome would receive more than praise. She will be worshiped by the world. This can only happen when the image of the beast is formed and as another superpower enters the scene.

A new nation would come to power after 1798 and join religious and political forces to form an image to the beast. This nation would give praise, worship, and authority (control) to the beast (Rome). One by one, the churches have joined the movement, including many of our own people. One by one, all nations are joining the movement. All the economic leaders and bankers have lined up. This is the spiritual fornication described in Revelation 13, 17 and 18. They have become “one mind” and are giving their “power and strength to the beast.”

Yes, they have created a global community and a remarkable world-wide movement, but they do not have the blessings of God. God’s displeasure is recorded in Revelation 14:8-11:

“And there followed another angel, saying, Babylon is fallen, is fallen, that great city, because she made all nations drink of the wine of the wrath of her fornication.” Revelation 14:8.

“And the third angel followed them, saying with a loud voice, If any man worship the beast and his image, and receive his mark in his forehead, or in his hand, The same shall drink of the wine of the wrath of God, which is poured out without mixture into the cup of his indignation; and he shall be tormented with fire and brimstone in the presence of the holy angels, and in the presence of the Lamb: And the smoke of their torment ascendeth up for ever and ever: and they have no rest day nor night, who worship the beast and his image, and whosoever receiveth the mark of his name.” Revelation 14:9-11.

We cannot afford to deviate from the faith that is based on the word of God. Any movement that compromises the truth and embraces or tolerates the grave errors and traditions of the papacy will feel the soul-destroying consequences described in the verses above. With these biblical/prophetic events unfolding right now, let us determine to take God’s message and spread it around the world. Let us take them to “every kindred nation, tongue and people.” (Revelation 14: 6).