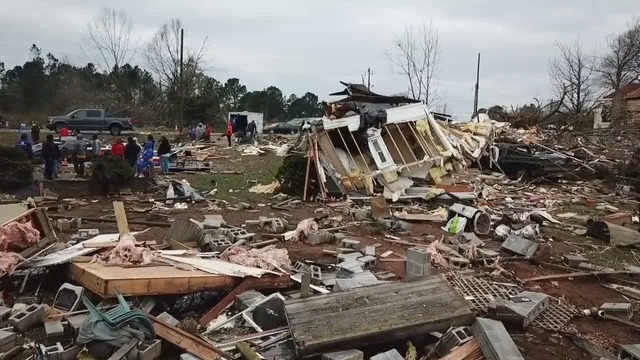 Parts of the US have been hit with 500 tornadoes in the last 30 days breaking a 40 year record. Severe weather has killed, injured, destroyed property and has caused historic flooding during April and May 2019 in states throughout the Great Plains, the Midwest and the South. [1]

According to meteorologists, the destructive weather was due to the atmosphere being stuck  in “neutral” causing its destructive forces to hover over the affected places.  This unusual weather system has made parts of the US look like a war zone.

So what is the cause of these storms? Is it due to God’s divine judgment, Satanic attacks, random natural occurrences, global warming or something else?  One thing is certain, God is removing His protection over the earth and this is leaving our world exposed and vulnerable. The prophecies of Matthew 24 and Luke 21 foretell that our earth’s destructive forces would intensify and become more frequent as we near the coming of the Lord.

Regardless if God is or isn’t sending disastrous judgments on America and on the rest of the world, we must remember that our only hope is to turn to Him. When Job was afflicted with terrible calamities he fled to his God. That was his only choice.

“For I know that my redeemer liveth, and that he shall stand at the latter day upon the earth: And though after my skin worms destroy this body, yet in my flesh shall I see God: Whom I shall see for myself, and mine eyes shall behold, and not another; though my reins be consumed within me.” Job 19:25-27.

As we see towns and communities completely devastated and overwhelmed our thoughts and prayers go out to everyone who was affected. When lives are torn apart we must realize that we can only rebuild with the help of our Maker.

“When I shut up the heavens so that there is no rain, or command locusts to devour the land or send a plague among my people, if my people, who are called by my name, will humble themselves and pray and seek my face and turn from their wicked ways, then I will hear from heaven, and I will forgive their sin and will heal their land” (2 Chronicles 7:13-14).

“The restraining Spirit of God is even now being withdrawn from the world. Hurricanes, storms, tempests, fire and flood, disasters by sea and land, follow each other in quick succession. Science seeks to explain all these. The signs thickening around us, telling of the near approach of the Son of God, are attributed to any other than the true cause. Men cannot discern the sentinel angels restraining the four winds that they shall not blow until the servants of God are sealed; but when God shall bid His angels loose the winds, there will be such a scene of strife as no pen can picture.” Testimonies, Vol. 6, 408.