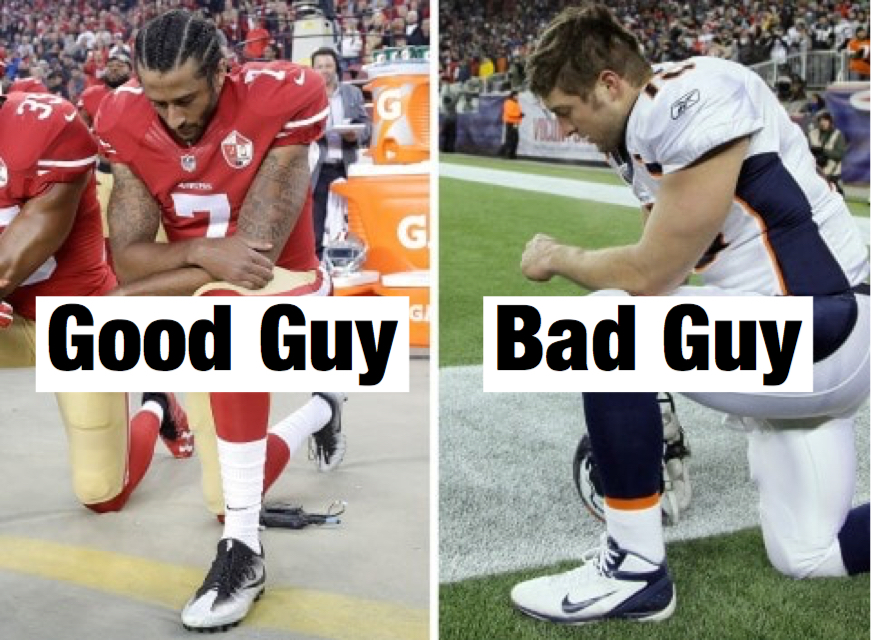 The mainstream media has heaped praise upon Colin Kaepernick because of his refusal to stand during the singing of the National Anthem in an act of political protest and political activism. Now the NFL, the owners, coaches and over 200 players have shown solidarity with Kaepernick by also protesting and refusing to stand for the National Anthem. This received immense, positive media coverage in defense of these protests. Remember, Colin Kaepernick also received media attention for his support of Fidel Castro and for wearing the famous socks of cops being depicted as pigs during football practice.

And naturally, the media loves him.

Tim Tebow was attacked and accused of mixing sports with religion. The New York Times called him the “most polarizing figure in sports.” And he was pushed out of the league. Why was the two-time National Champion, Heisman Trophy winner, and one of the greatest college football players ever – why was he chased out of the NFL? Because he dared to take a stand for God and for life. He was pro-life and made an NFL commercial during Super Bowl Sunday in support of life. And he was mocked for kneeling and praying to God after making a touchdown.

This generation hates the very existence and recognition of God. There is a double standard in today’s culture and it is based upon the fact that we live in a godless society. When you kneel in defense of left-wing, liberal, political activism you are embraced by the media, but when you kneel to show your love to God you are a villain. You can mix the NFL with politics; however, just leave God outside the stadium.

This double standard is replicated daily and at all levels throughout our corrupt culture. It’s in the schools, in Hollywood, in politics and now in sports. We will never have truth and justice with this kind of mindset of selective, biased praise towards some and outrage towards others. God despises this very thing:

“None calleth for justice, nor any pleadeth for truth: they trust in vanity, and speak lies; they conceive mischief, and bring forth iniquity.” Isaiah 59:4.

“Therefore is judgment far from us, neither doth justice overtake us: we wait for light, but behold obscurity; for brightness, but we walk in darkness.” Isaiah 59:9.