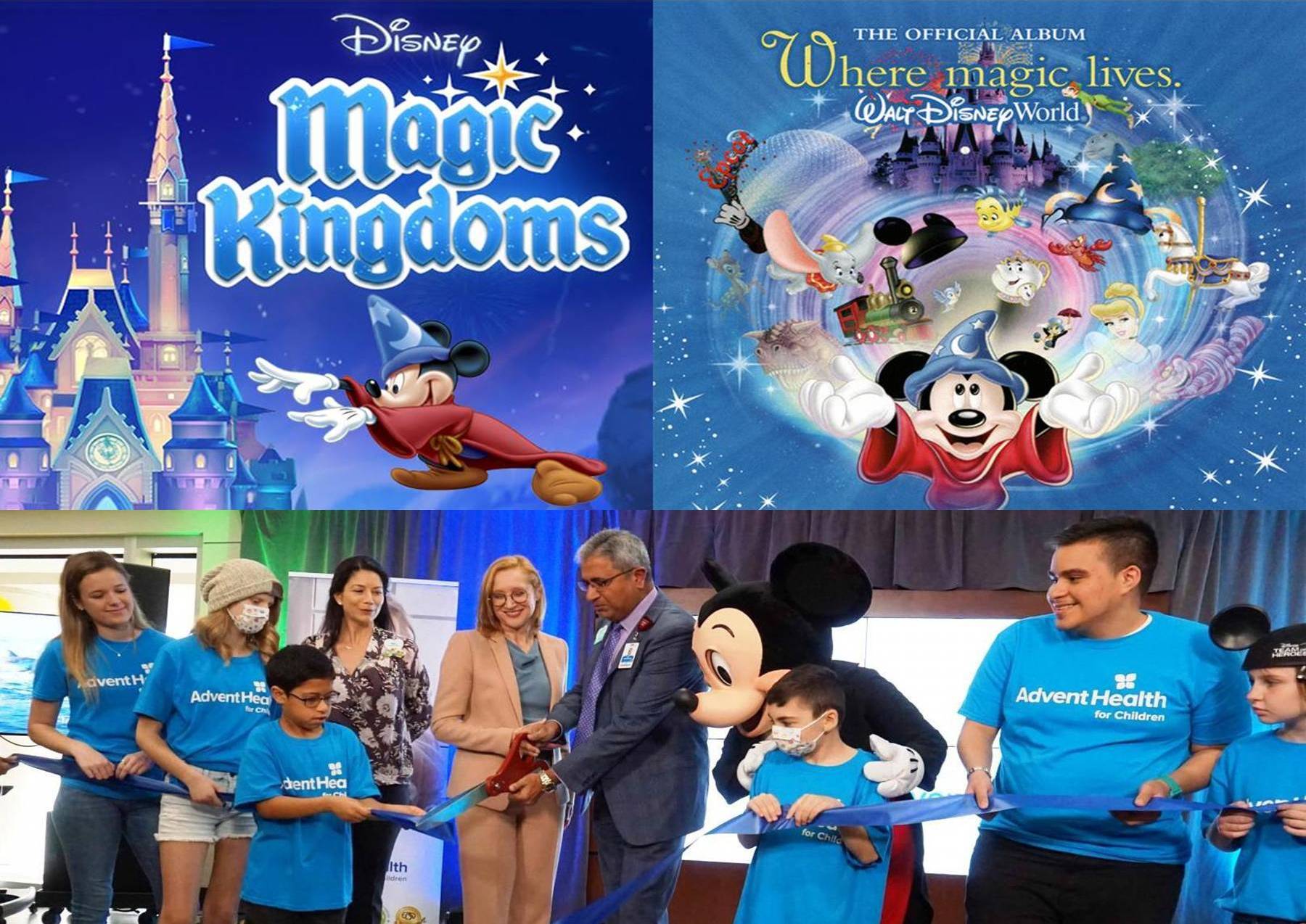 On January 15, 2021, the Walt Disney Company released a report saying that it had completed a project designed to “extend the magic” to local area hospitals in Orlando, Florida. AdventHealth for Children was one of those hospitals. [1] In the photo above, Ellisa Margolis, Senior Vice President of The Walt Disney Company and Dr. Rajan Wadhawan, Senior Executive Office of AdventHealth for Children, pose with Mickey Mouse during the ribbon-cutting ceremony.

In the video above, Ellisa Margolis, from Disney, explains their partnership with AdventHealth and their vision for children’s healthcare. She said:

“We have reimagined this hospital space with some interactive murals, with magic windows and with other enchanted art. We are excited to bring the first of its kind, play space, to AdventHealth for Children which is a specially designed theme to Star Wars play space where kids can interact” (video above).

Notice how AdventHealth’s official website describes this new hospital experience they have created with Disney:

“Magic windows will provide mesmerizing views into the active, living worlds found in Disney stories. Magic Portals will engage patients and families with games and favorite characters. And patients can customize their hospital visit by choosing their favorite Disney stories and characters, which will surround them during their stay. The wireless system will also unlock special elements to further personalize and enhance the experience, such as “enchanted” artwork that comes alive. [2] 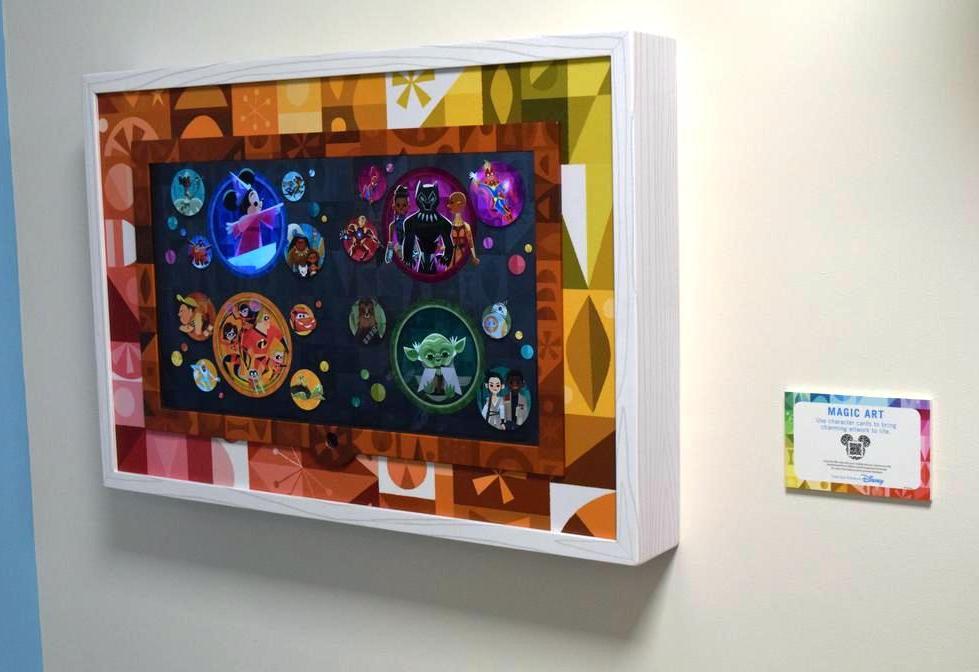 Here is the “Magic Art” inside the AdventHealth Children’s hospital. A special card is placed in front of the artwork and a video is played for each Disney character, including Yoda, the green alien whose hidden message about being connected to the “force” is pagan eastern spirituality. [3] 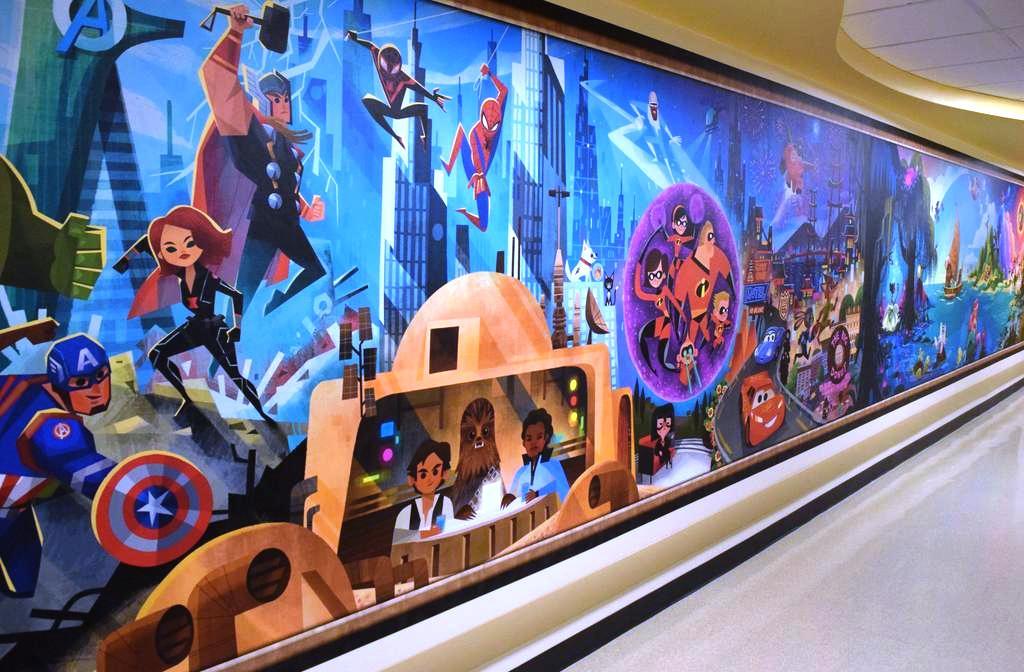 The Disney Mural at AdventHealth for Children features multiple interactive elements from various Disney universes. With a special app that can be downloaded to any smartphone, you can interact with the mural. [3] 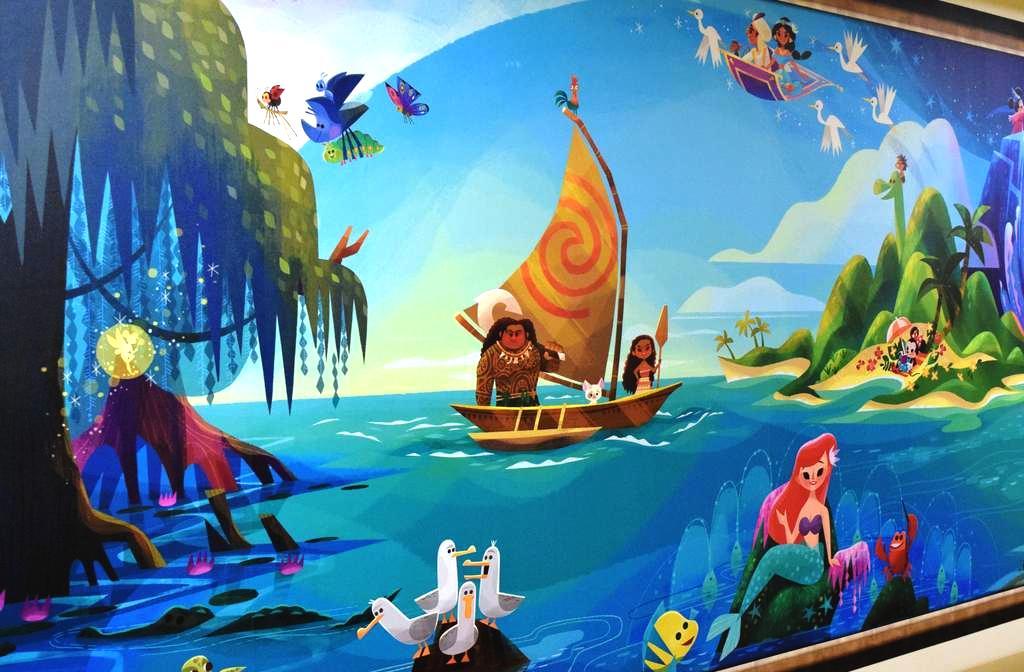 Here is another section of the interactive mural that will magically come to life when viewed through a special downloadable app. [3] 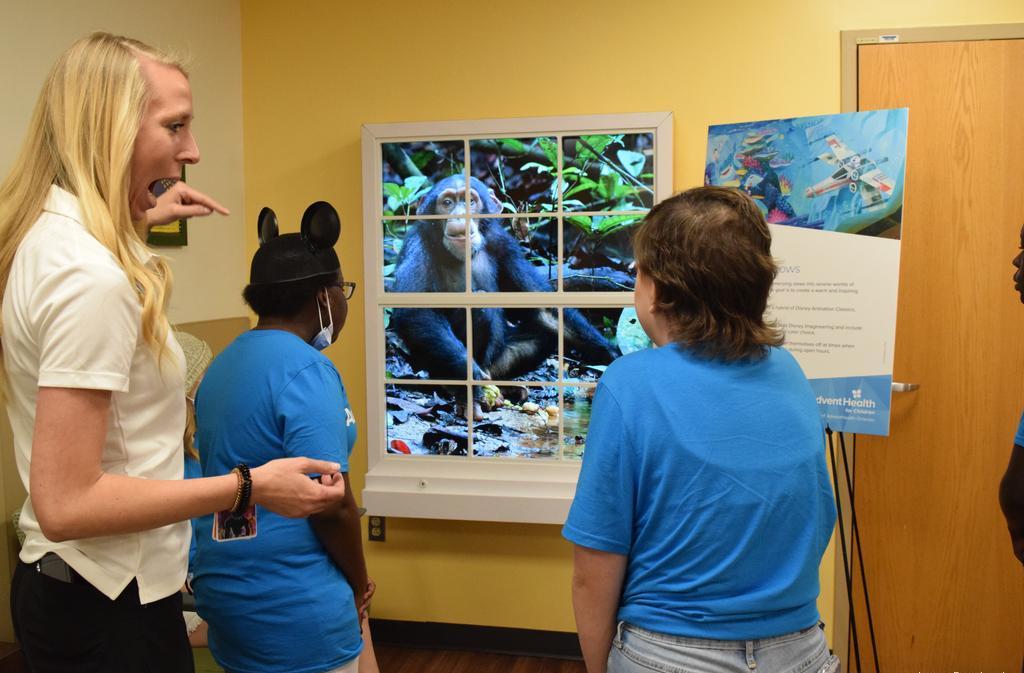 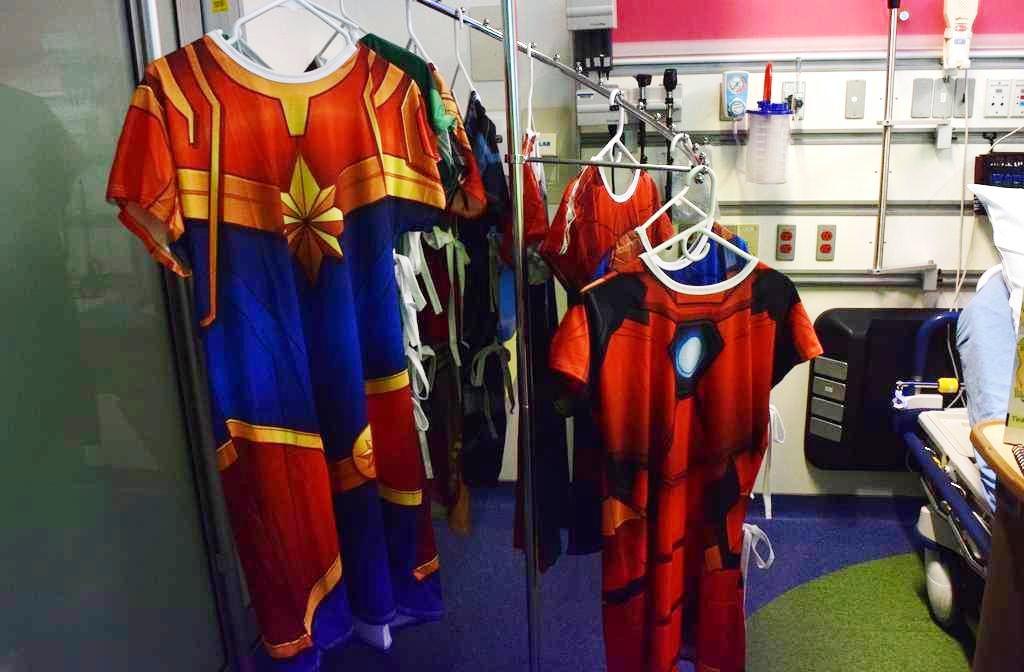 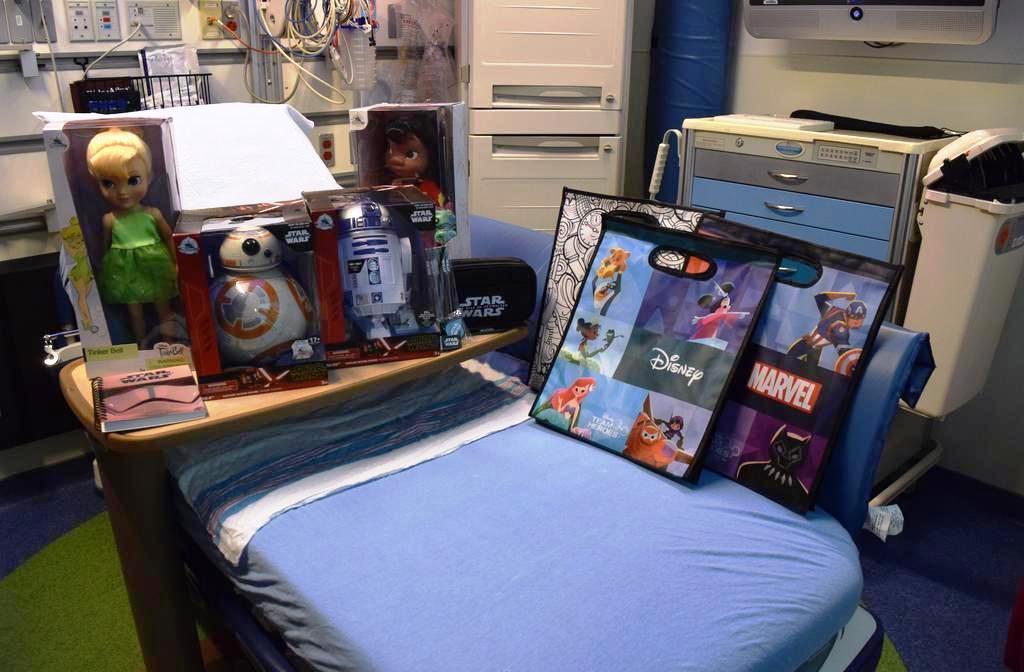 Disney is the largest provider of sorcery for children with its amusement parks, movies, cable channels, online streaming, toys and clothing. Disney is committed to entertaining children through spiritualism. This is the business partner that Seventh-day Adventists have joined. Disney is involved in turning the young and impressionable minds of our youth to the Prince of Darkness. Please analyze the following images from Disney carefully. Click on the blue links to see the details: 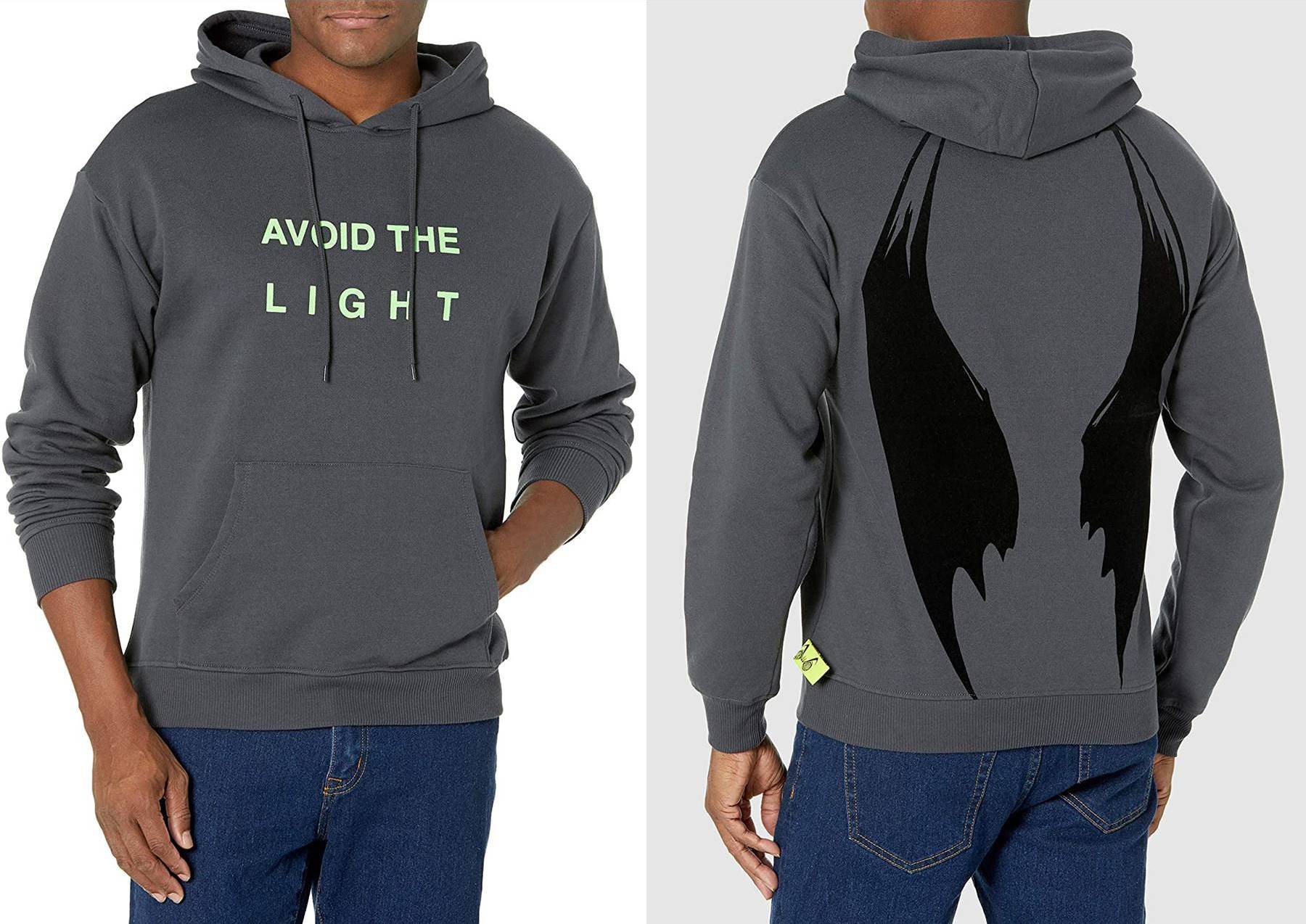 Disney also sells clothing that praises and glories Satan. Here is Disney’s “Avoid the Light” sweatshirt. Notice the angel wings on the back. Which angels avoid the light? The angels in heaven? No. This is talking about Satan and his fallen angels. Now you can be like the devil with Disney’s new clothing line. 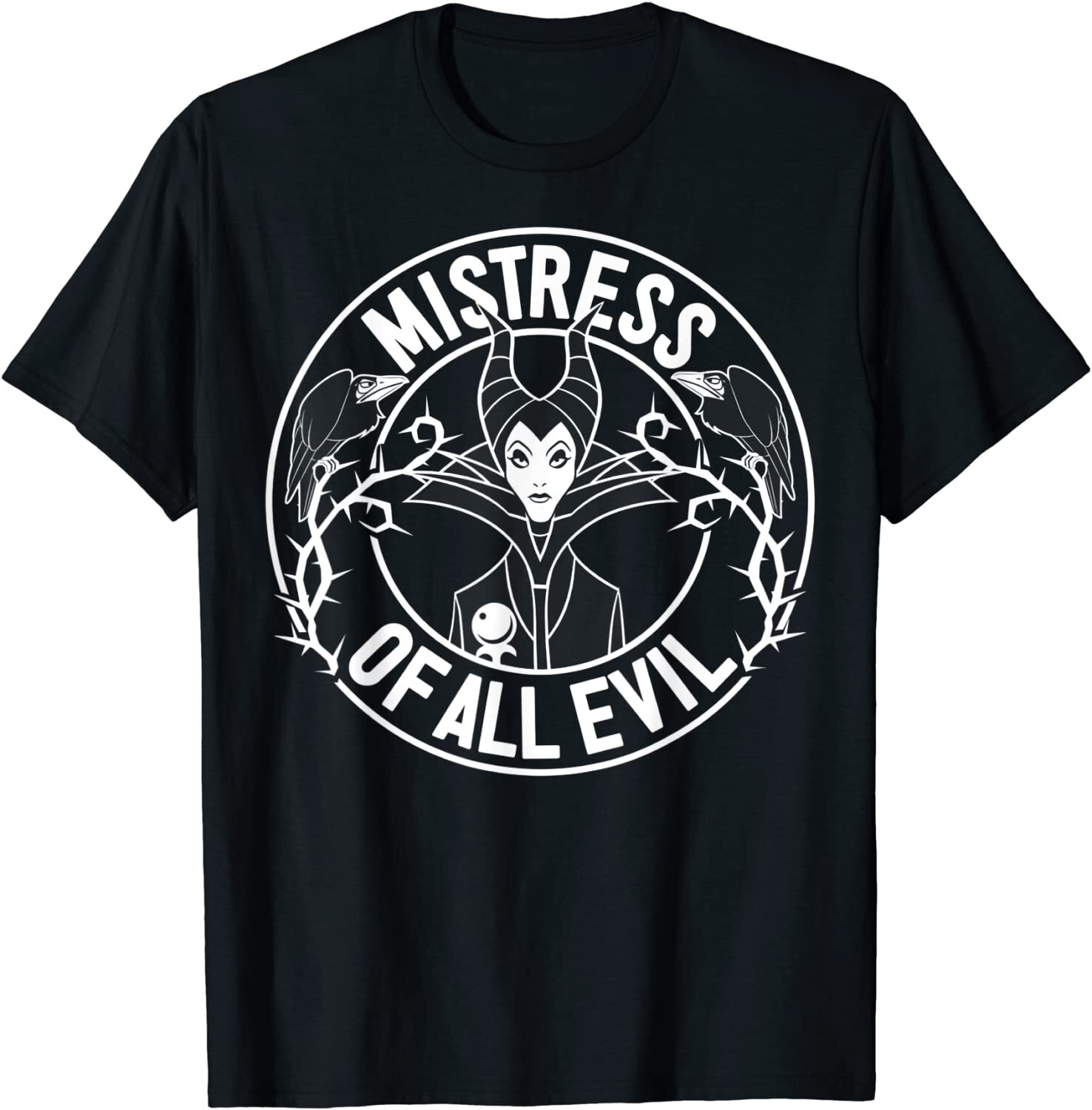 The Disney “Mistress of All Evil” shirt is also available for purchase online. For years, Disney has been championing the LGBT+ movement, but now they are promoting divination and witchcraft among young people. This is the message that Disney wants our children to embrace and present to the world through fashion. 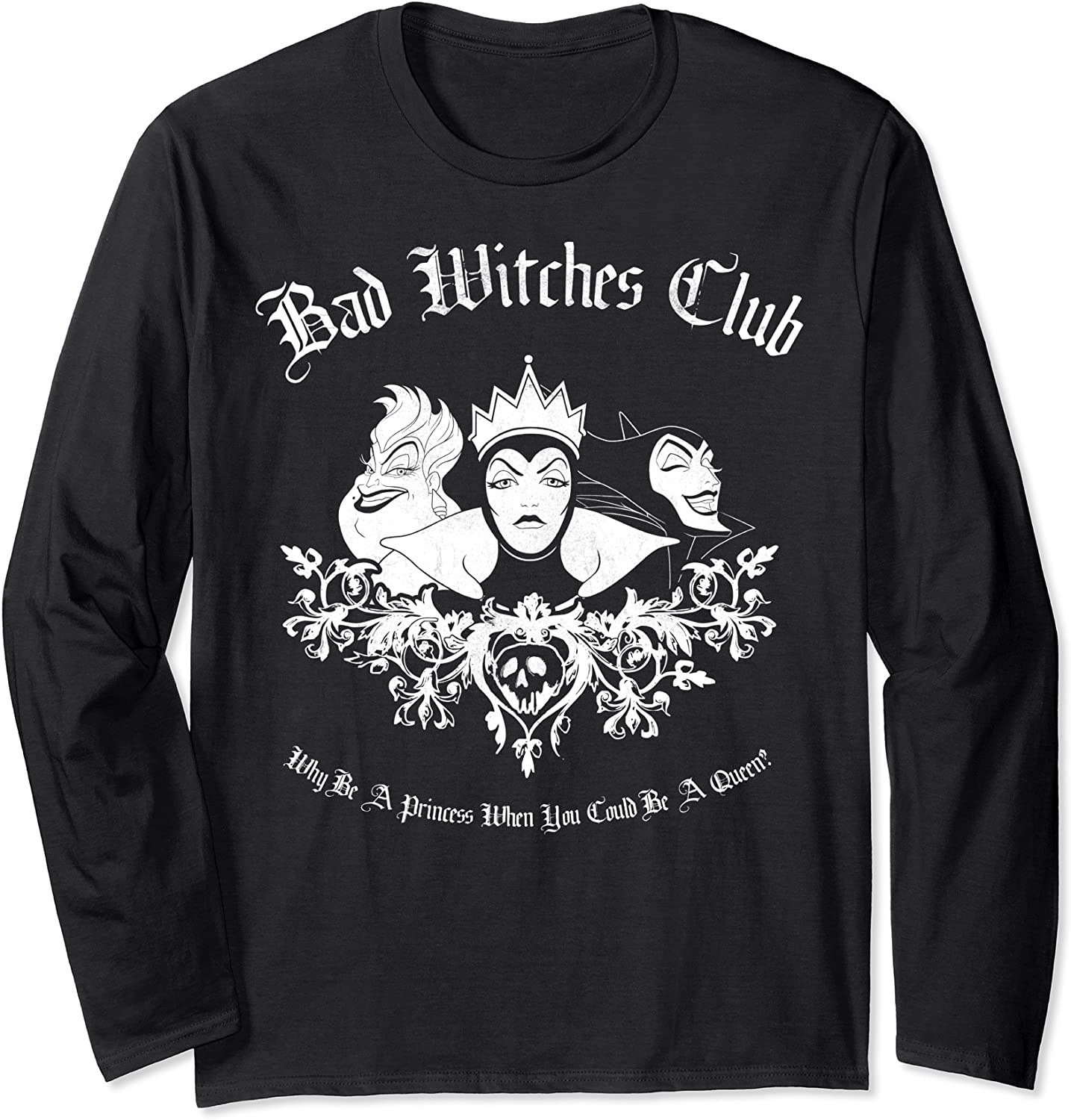 Here’s the Disney “Bad Witches Club” shirt that is for sale for both kids and adults. God is not honored when Seventh-day Adventists associate with those who are guilty of promoting magic, sorcery, witchcraft and evil among our youth. God has not changed His mind when He warned:

“Regard not them that have familiar spirits, neither seek after wizards, to be defiled by them: I am the LORD your God.” Leviticus 19:31.

And to show you that these are not just innocent representations of Disney characters, check out the following image: 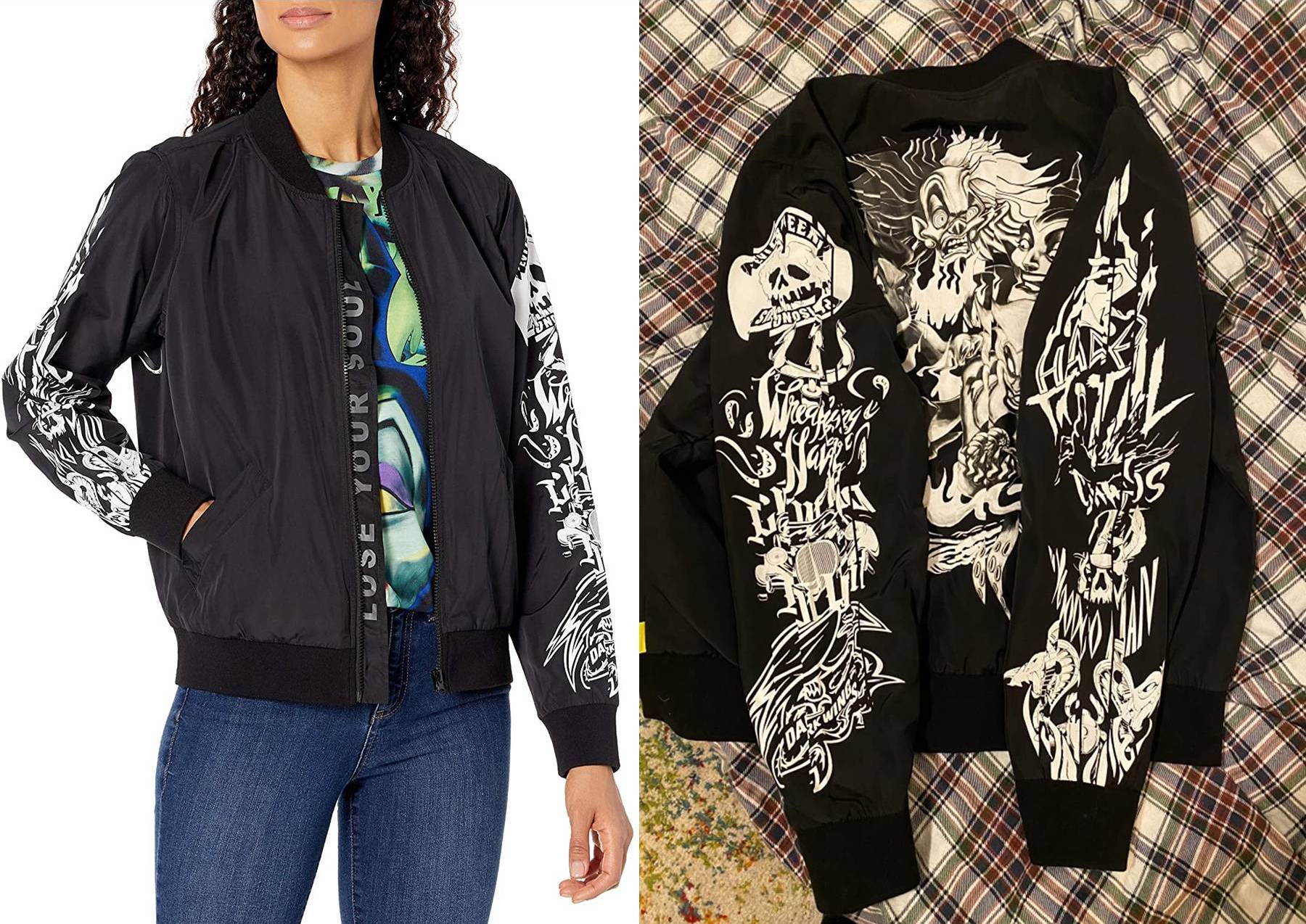 Here is Disney’s “Cast Your Spell & Lose Your Soul” jacket. This is glorifying witchcraft, sorcery and familiar spirits. Casting spells is part of witchcraft. This is inviting demons into your life. This is what Disney is promoting to the world through clothing. It is the devil’s new marketing tool to promote his message among young people. 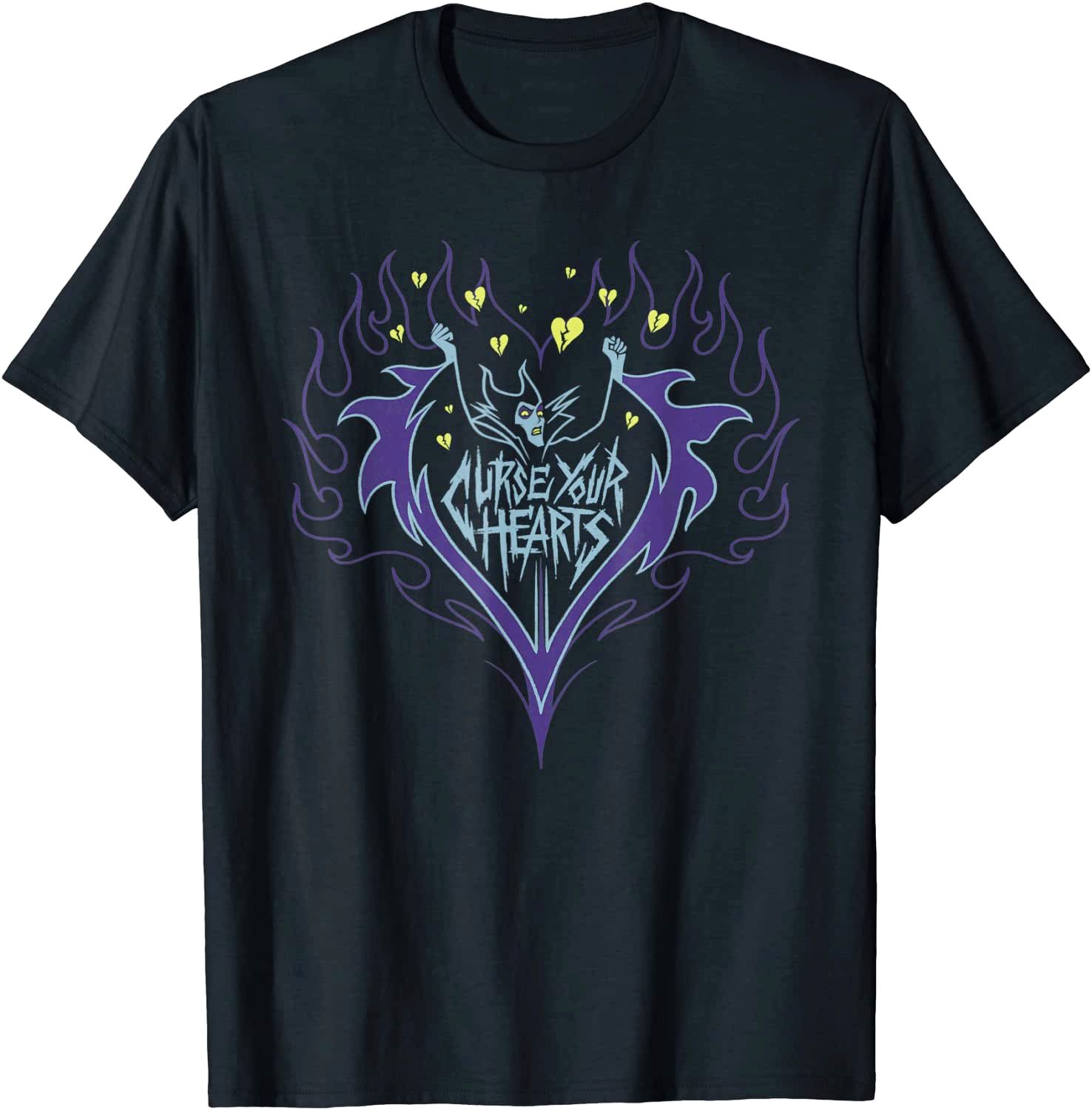 Disney’s “Curse Your Hearts” shirt is NOT the gospel of Christ but a message from the evil one. This is what Disney is proudly selling online to the public. Brothers and sisters, these associations are corrupting us. Our faith and testimony are defiled by these relationships with those who traffic in spiritualism. 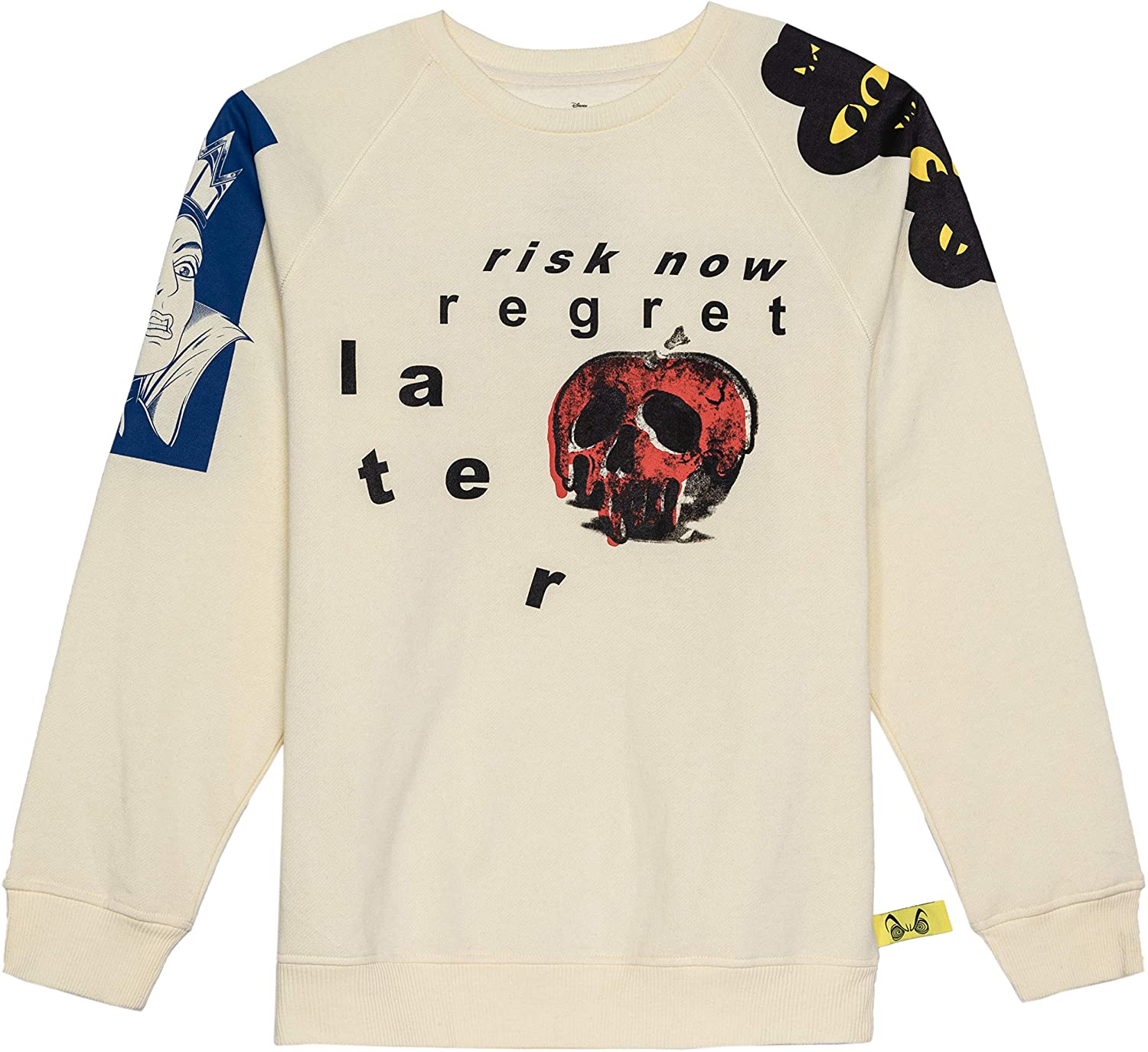 Here is Disney’s “Risk Now, Regret Later” sweater. What is the message? Don’t worry about consequences. Don’t worry about the future. Don’t worry about rules. Live life the way you want to live it, and then we will regret our choices. These are the same words that Satan tempts young people with today, and Disney is promoting the same diabolical message on clothing. 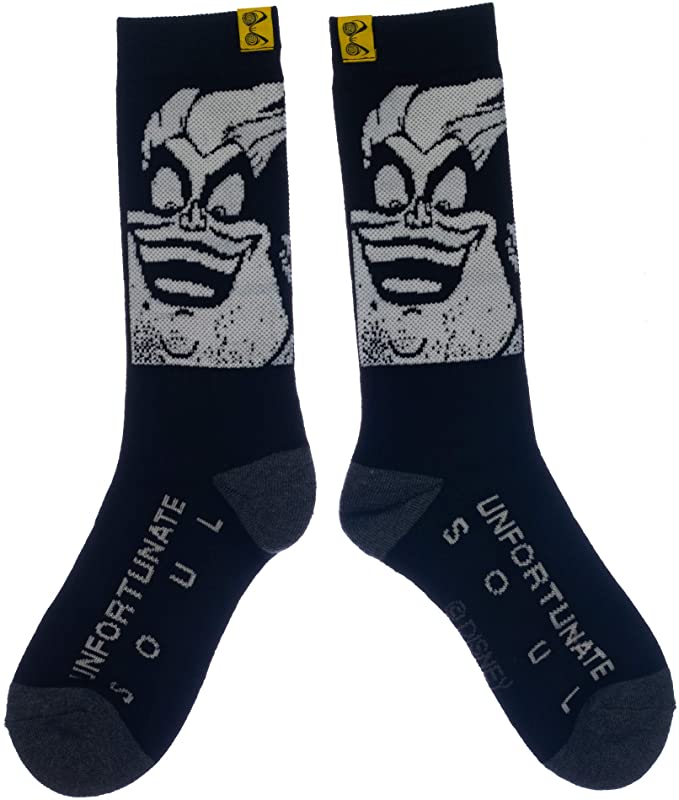 Here are the “Unfortunate Soul” socks with the face of one of the Disney witches. This is glorifying the sinful and lost condition of humanity. Disney sells them so that you can carry the witch’s message wherever you go. Disney is a company that is steeped in the occult and spiritualism. Notice what else God says:

All sorcery and those who practice it and associate with it will not be found in heaven. 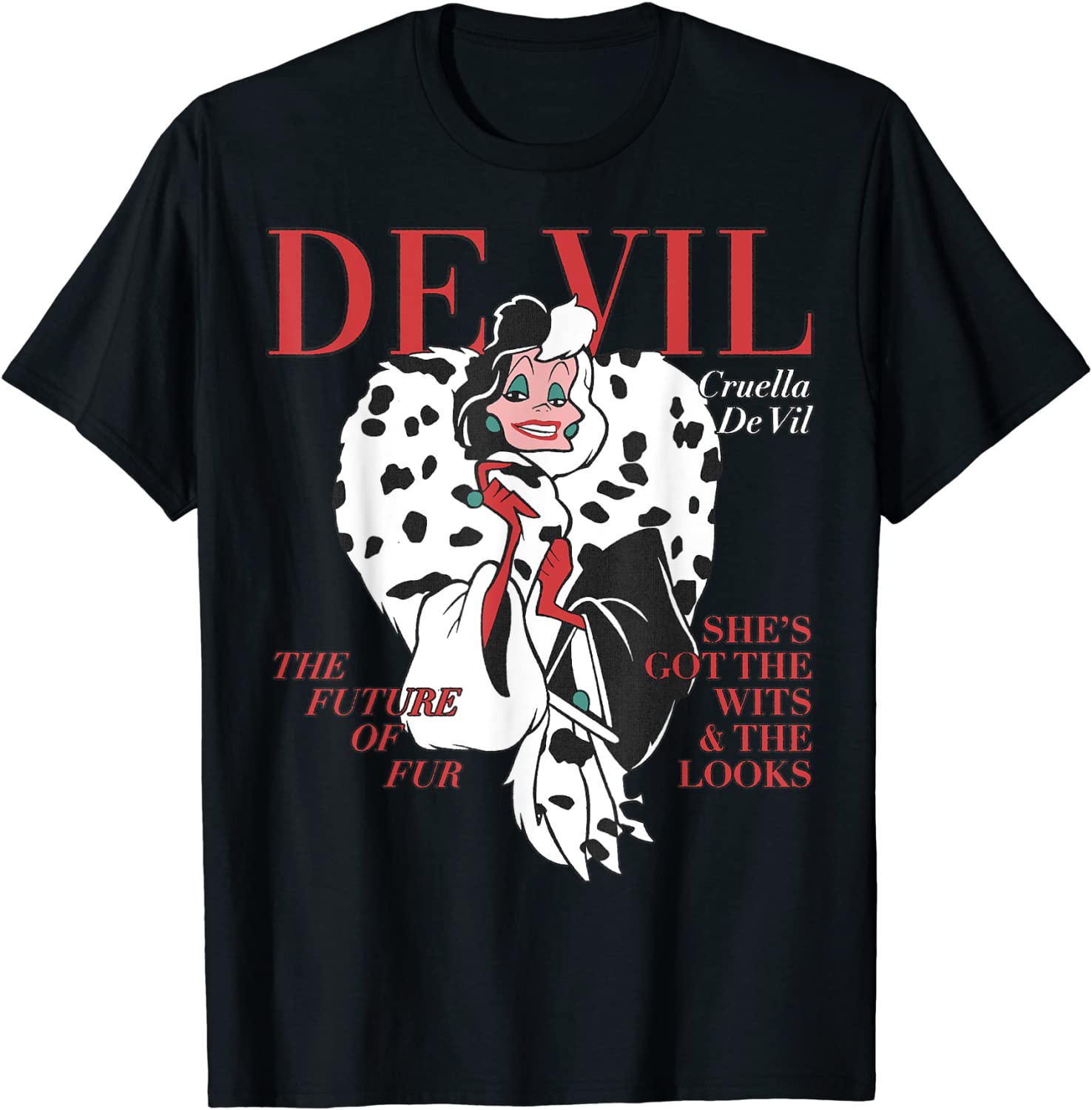 Yes, this is Disney calling on the “Devil.” You can buy your own shirt with the devil’s name on it. “Well,” some will say, “that is just the name of the Disney character.” No, it’s much more than this when you look at the following image: 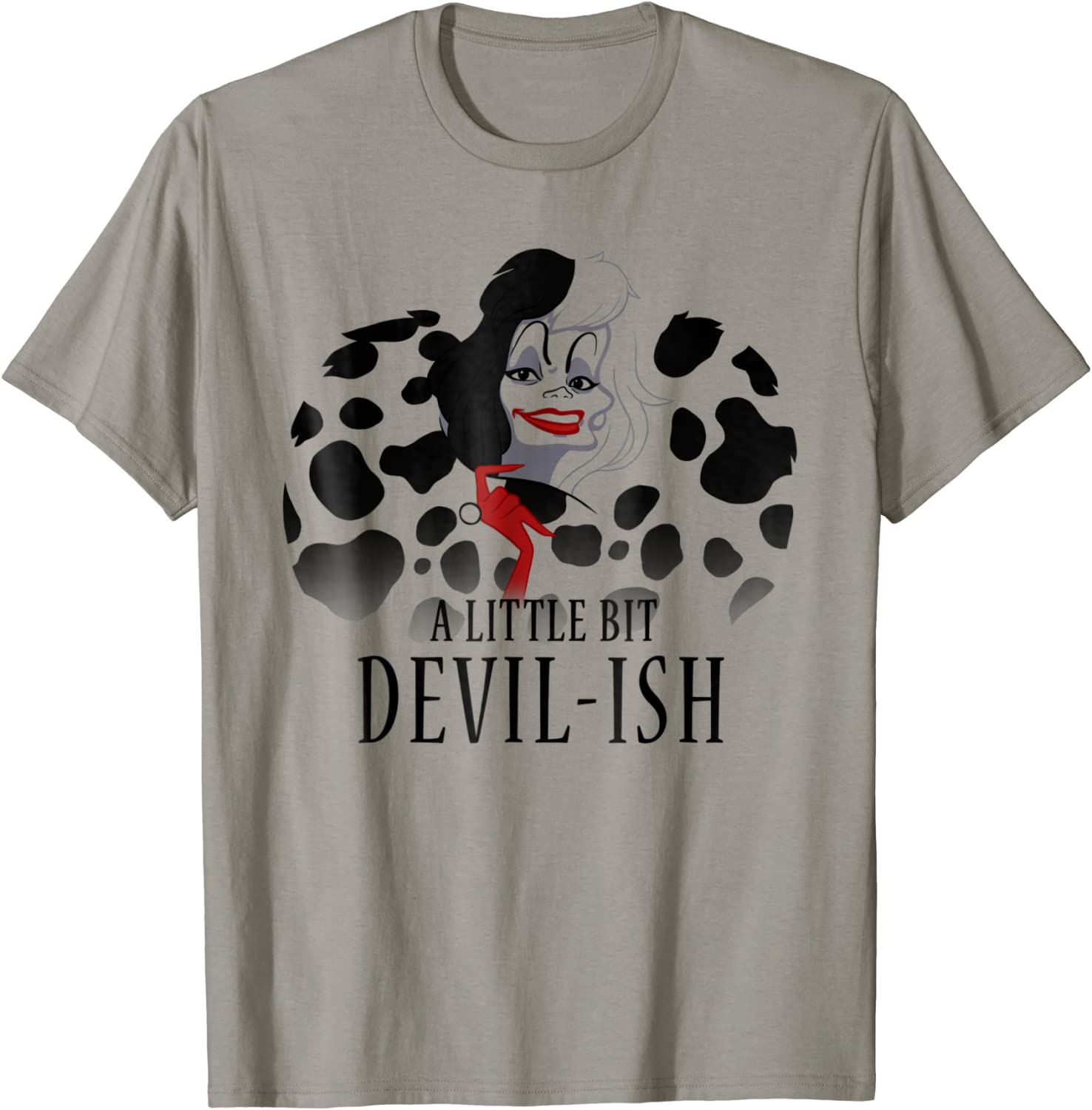 Disney is also selling “A Little Bit Devilish” shirt so that you too can act out your evil, sinful desires. These shirts promote more than just the name of a Disney character. They are promoting the devil’s name and his sinful behavior. 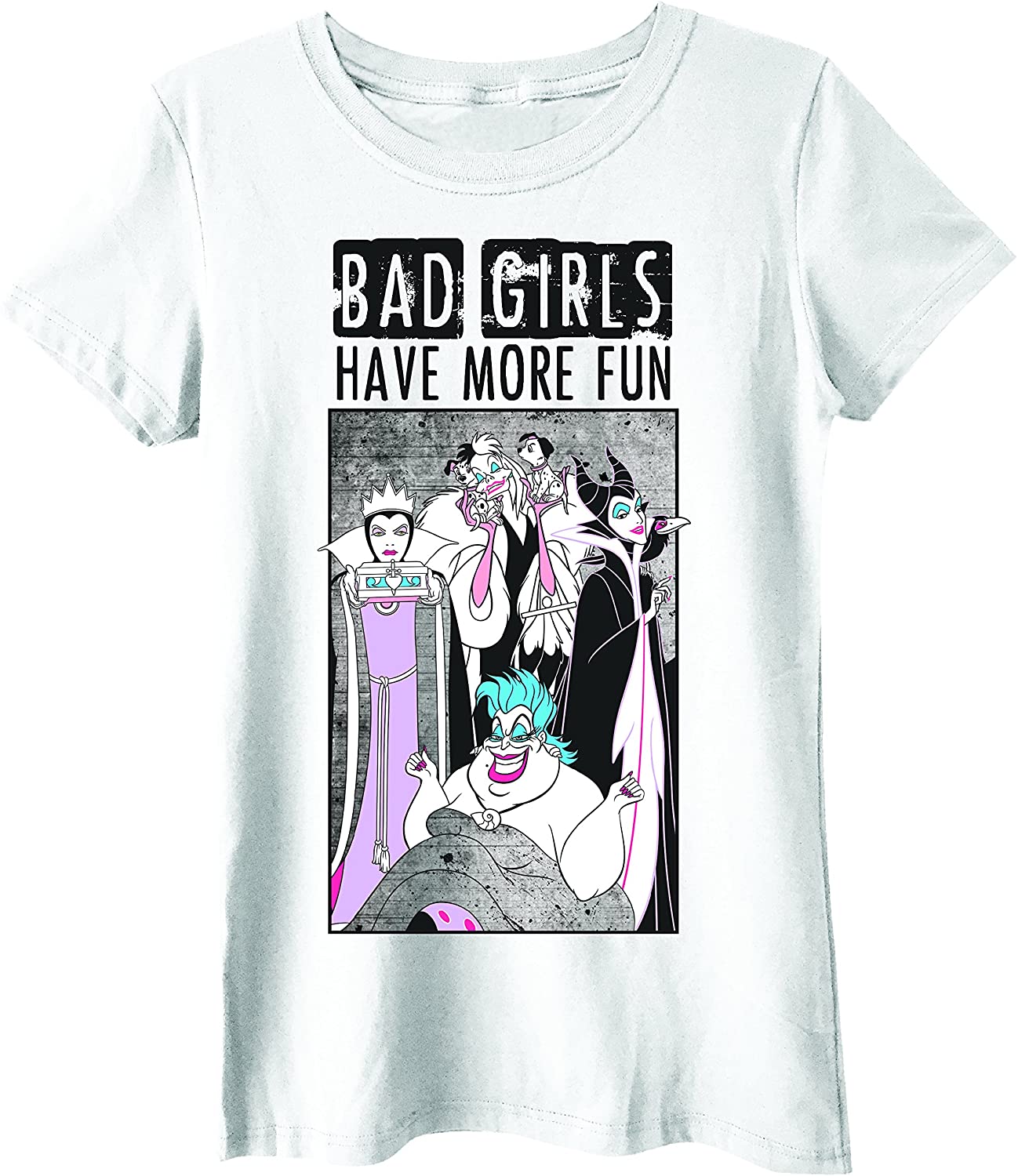 Here are the Disney witches with the message: “Bad Girls Have More Fun.”

Those who keep God’s commandments will be in heaven. Those who behave bad and promote sorcery will be outside the city of God. God cannot be pleased when we become partners with those who call good evil and evil good (Isaiah 5:20). 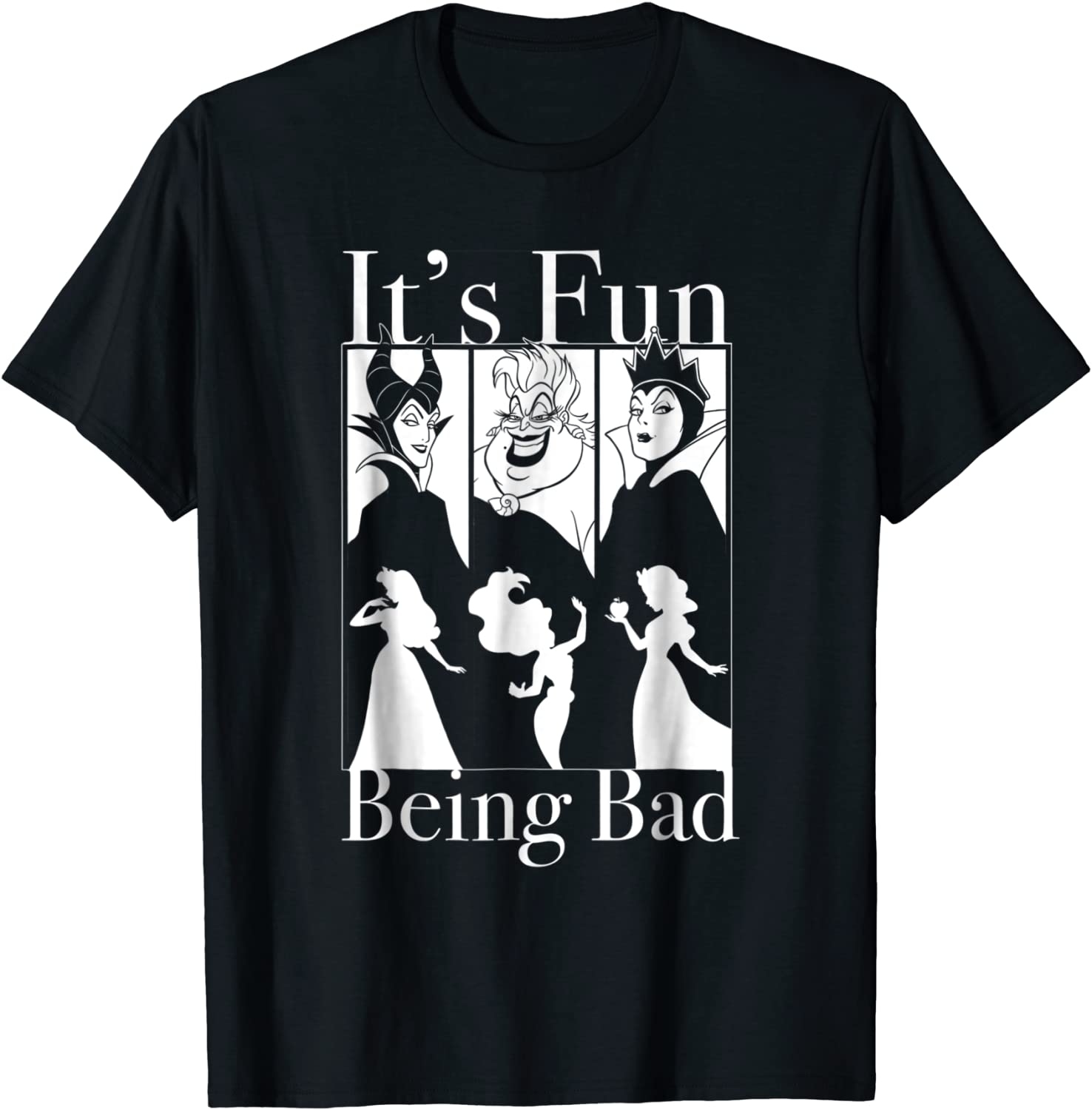 Here is Disney selling their “It’s Fun Being Bad” shirt. Whose message is this? God’s or Satan’s? Seventh-day Adventists must sever their business relationship with the promoters of evil and spiritualism, regardless of the economic advantage or publicity we may receive. Do we prefer that God’s curse be upon us and not His blessing? 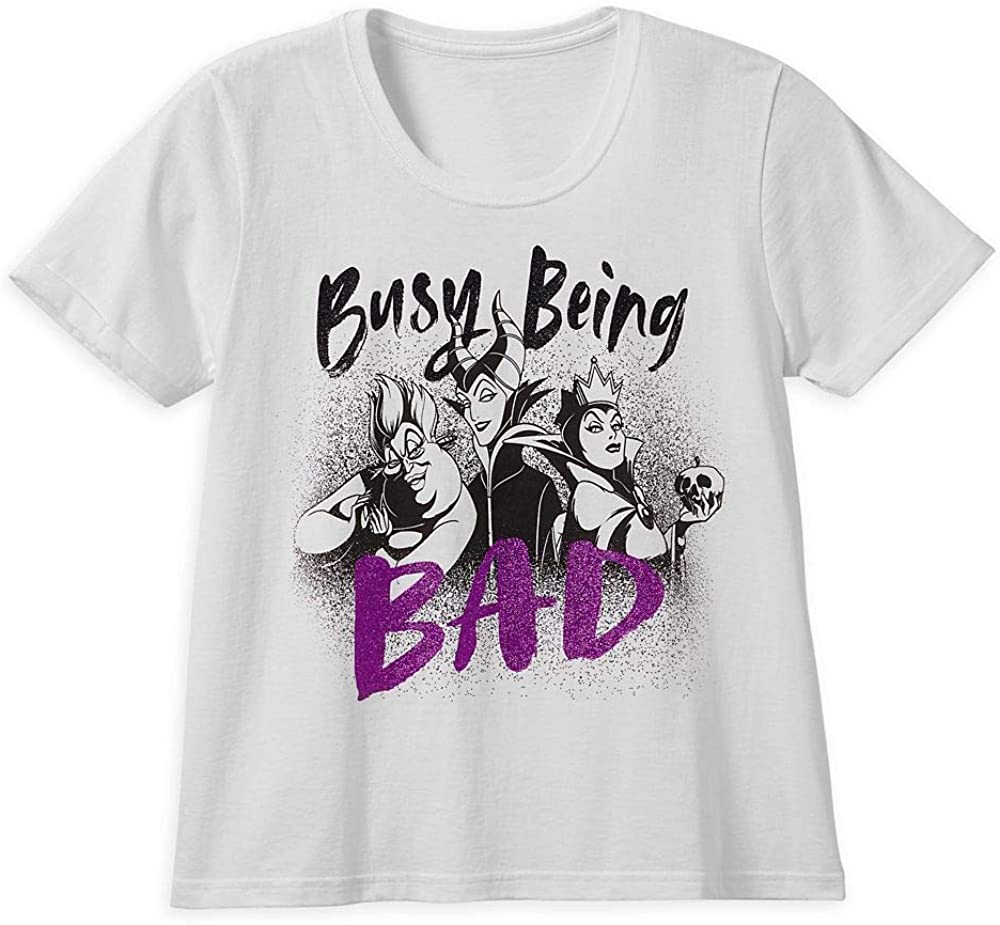 Here is Disney’s “Busy Being Bad” shirt for children. What is the message that Disney wants them to learn? Apparently, Disney does not support family values. They support anti-biblical views on marriage, family, sex, spirituality and behavior. 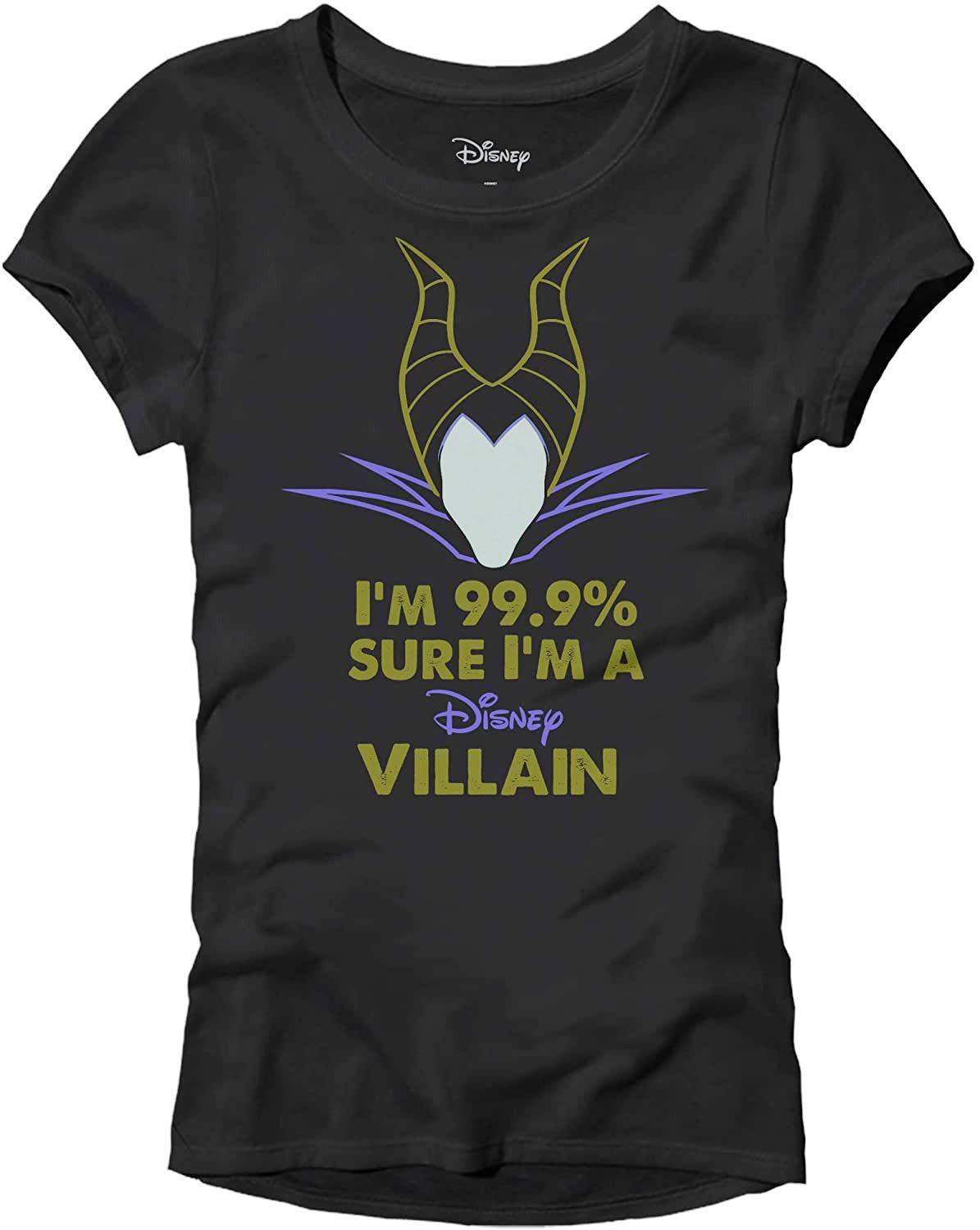 Here is Disney’s “I’m 99.9% Sure I’m a (Disney) Villain” shirt. Our church members need to also reevaluate how they spend their money at Disneyland, Disney World, Disney Channel and Disney+ steaming services because our money goes to promote this line of children’s clothing. Galatians 5:19-21 tells us that those who embrace “witchcraft” will not inherit the kingdom of God. 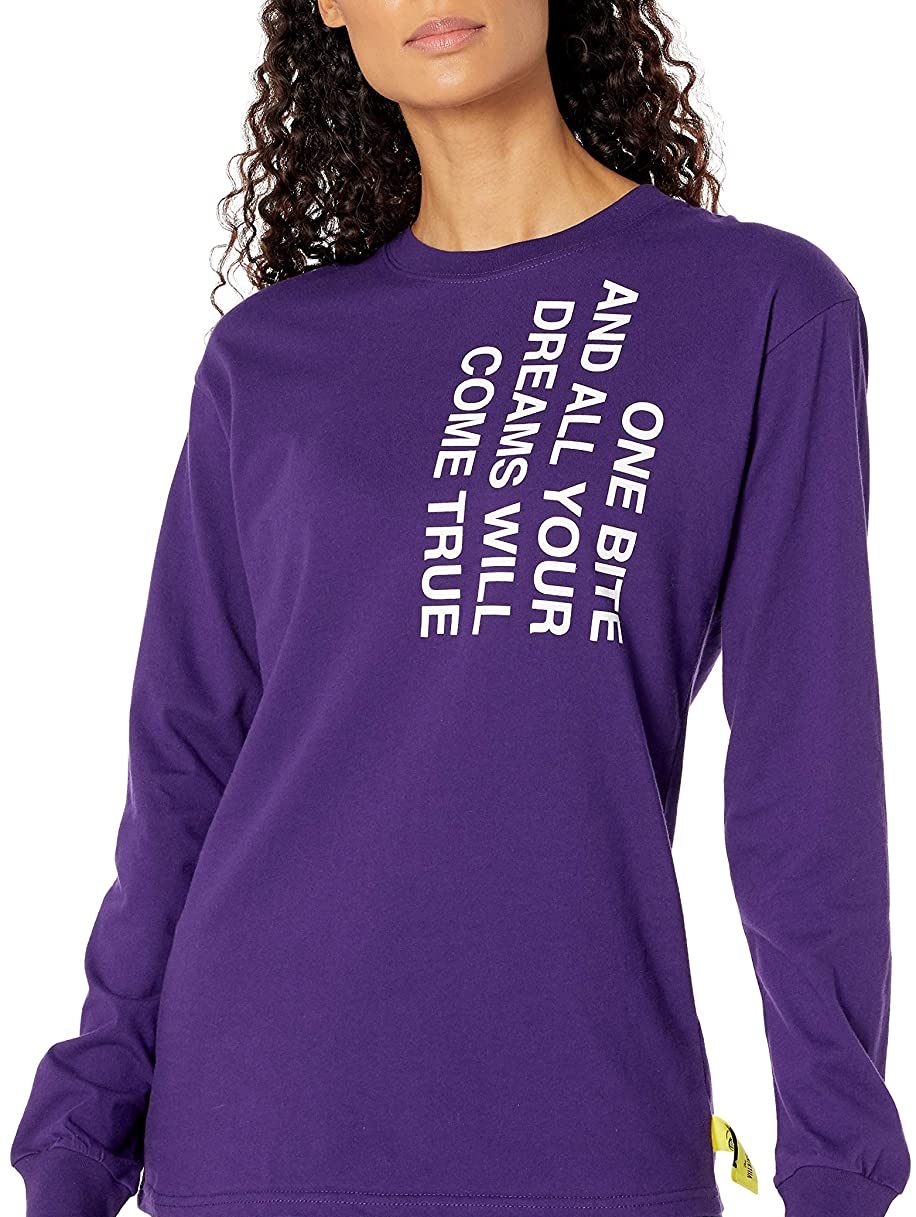 Here is Disney’s “One Bite and all Your Dreams Come True” shirt. This is the same message the serpent gave to Eve in the Garden of Eden. 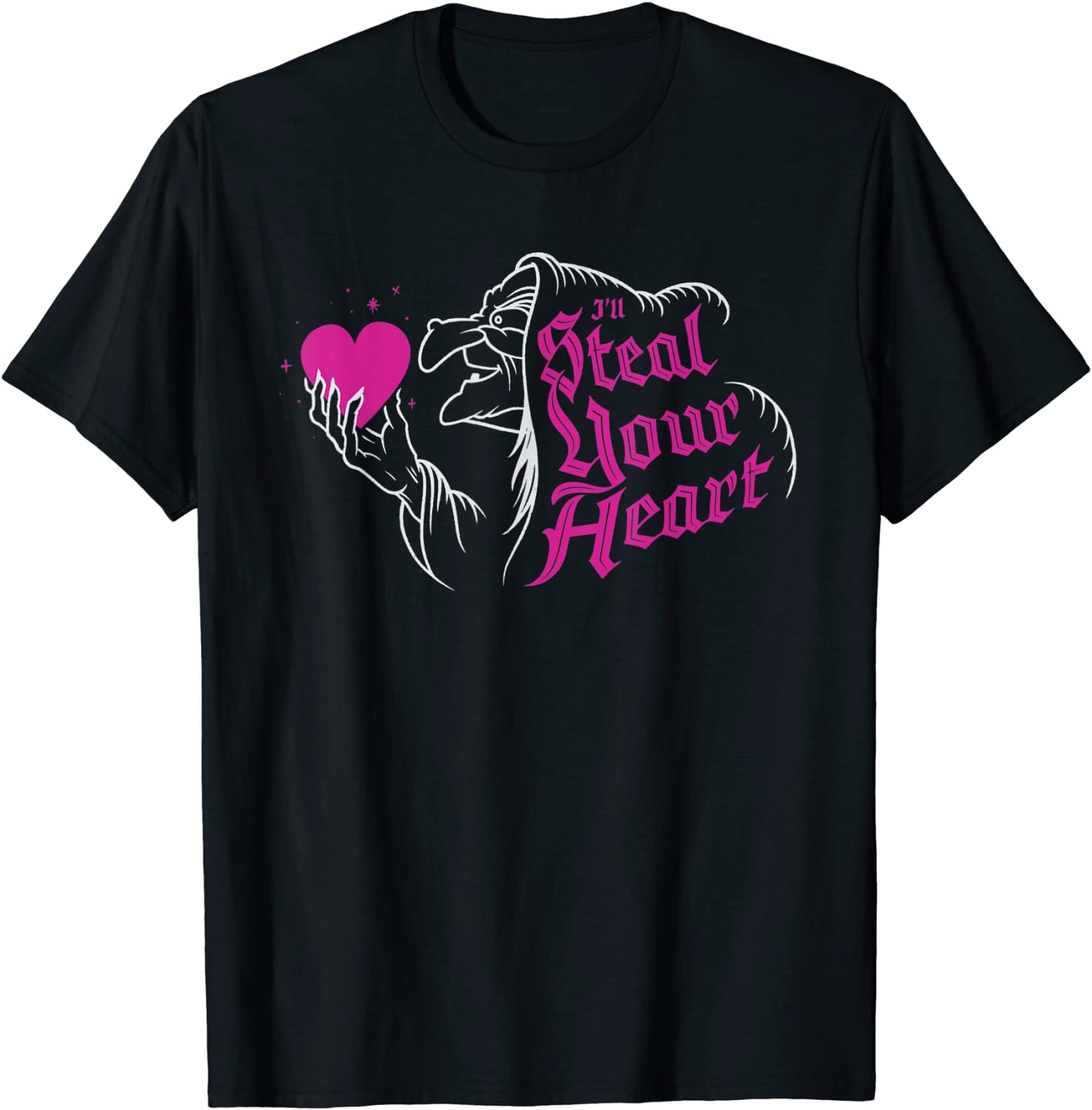 Here is Disney’s “I’ll Steal Your Heart” shirt. This is exactly what the enemy of souls is trying to do and has been very successful in seducing our young people with the help of Disney.

Consider how much influence Disney has as it promotes the LGBT+ agenda among our youth. But they are not just LGBT+ advocates. They are the biggest promoters of witchcraft and sorcery. When a corporation blatantly advertises its immoral, ungodly, and demonic agenda, it is time for anyone who actually still fears God to cut those relationships. Seventh-day Adventists can’t just sweep this sinful partnership with Disney under the church rug. We have to call sin by its name. We have to call evil what God in His word calls evil, so that we too do not fall into sinful complicity.

Terry Shaw, AdventHealth CEO, was on national television encouraging the public to go to Disney World. He said on CBS News “Face the Nation” that he was a Disney season ticket holder and that he wouldn’t hesitate to go to a Disney theme park during the Covid-19 pandemic. [4] It is a terrible responsibility to be in a leadership position during the Omega of Apostasy. We shudder to think how many of us today are under this judgment described in Ezekiel 34 in the courts of heaven. It is far better to find another job than to fail in the duty that God has placed on those in authority among God’s people. 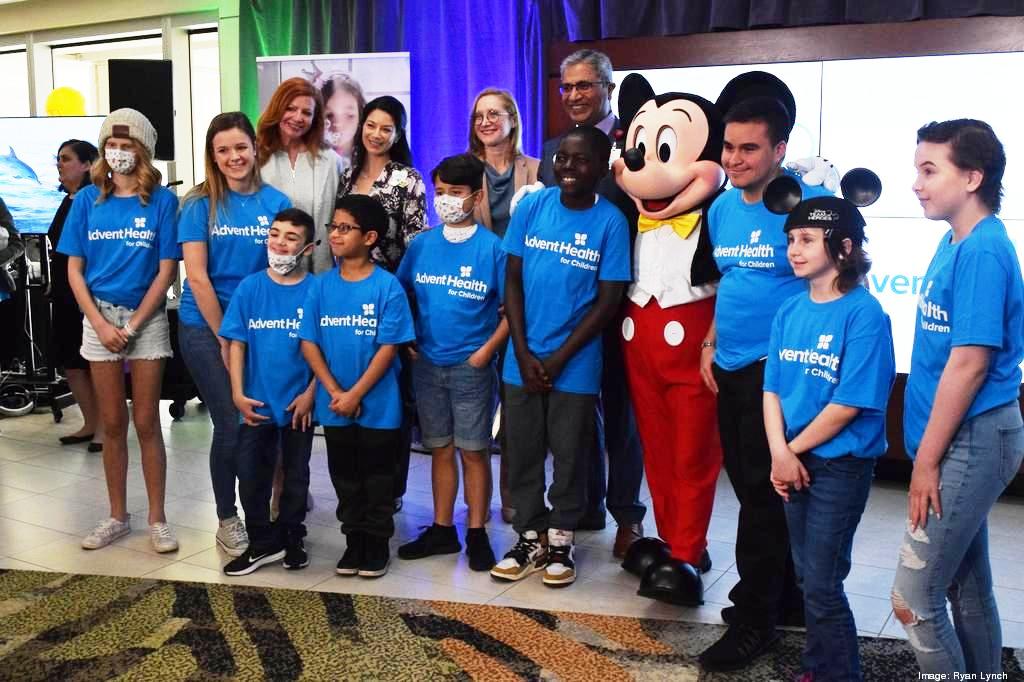 God is with the shepherds who feed the flock, who defend them from the wolves and who guide them along the paths of truth and righteousness. God supports the shepherds who lay down their lives for the sheep (John 10:11). These are the faithful ministers who understand the sacredness of the oath they have taken to: “Preach the word; be instant in season, out of season; reprove, rebuke, exhort with all long suffering and doctrine” (2 Timothy 4:1, 2).

God is not against these faithful sentinels and watchmen. But He is against the shepherds who have become like ravenous wolves that lead the sheep astray; wolves who are in fact destroying the flock because of their unwillingness to do anything about the apostasy.

“The day of God’s vengeance is just upon us. The seal of God will be placed upon the foreheads of those only who sigh and cry for the abominations done in the land. Those who link in sympathy with the world are eating and drinking with the drunken and will surely be destroyed with the workers of iniquity. ‘The eyes of the Lord are over the righteous, and His ears are open unto their prayers: but the face of the Lord is against them that do evil.’ Our own course of action will determine whether we shall receive the seal of the living God or be cut down by the destroying weapons” (Testimonies, Vol. 5, p. 212).