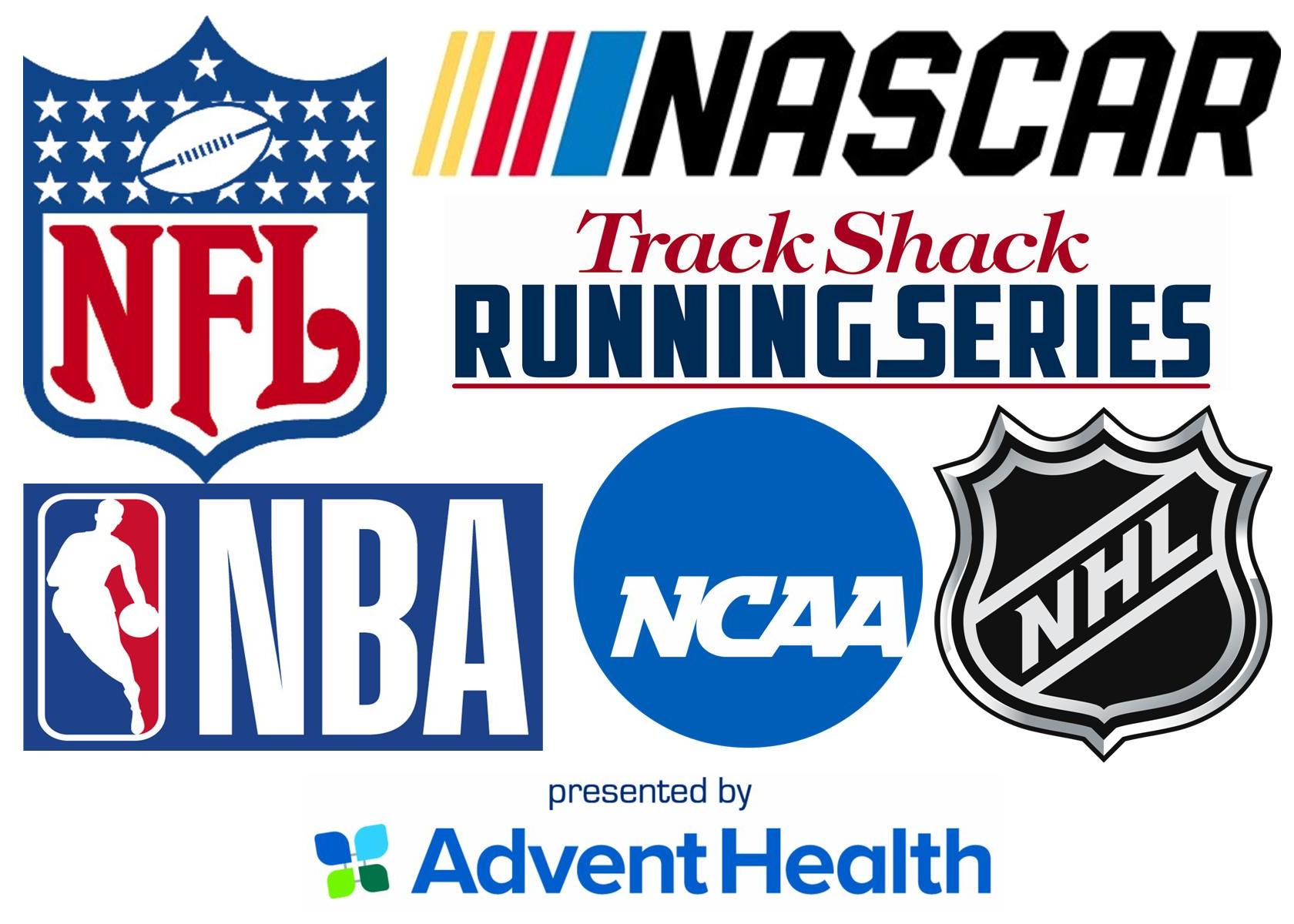 AdventHealth is purchasing multi-year, multi-million dollar naming rights contracts with major professional sports and college teams that compete in the NFL, NBA, NHL, NASCAR, NCAA and other sporting events. These naming rights agreements are financial transactions in which AdventHealth purchases the right to place their name on a facility, a uniform or an event.

It’s a form of high-priced advertising to give your name brand a lot of publicity. However, purchasing the naming rights from major sport teams is much more than just advertising; it’s a partnership. The aim is to get millions of fans to identify the name “AdventHealth” with their favorite sports team; and hopefully, loyalty to the team will translate into loyalty to AdventHealth. 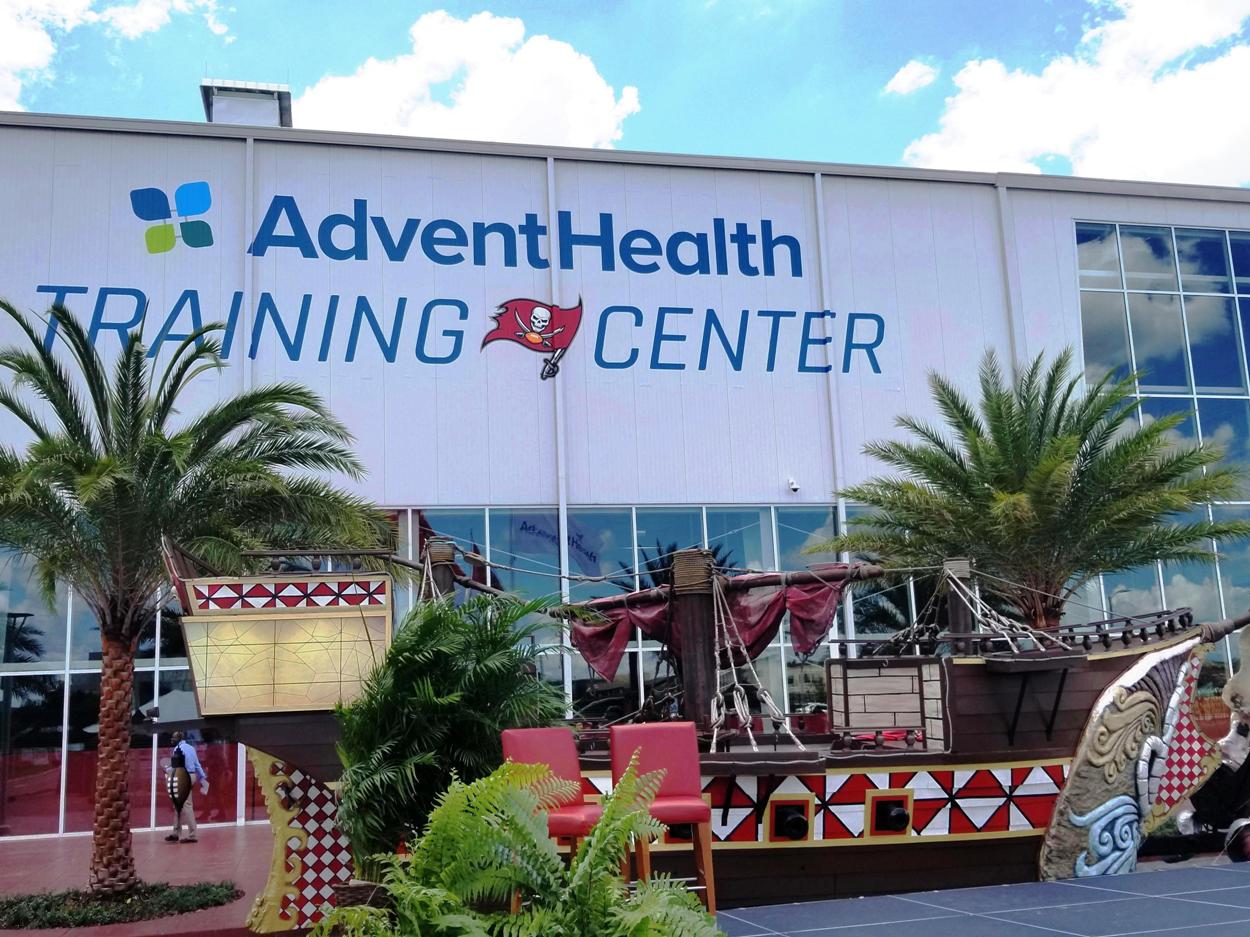 AdventHealth’s Executive Vice President Michael Shultz [3] explains why he feels that becoming partners with these professional sport teams is so important. In his own words Michael Shultz says that these partnerships give AdventHealth a competitive advertising advantage over the other health care systems:

“The ability to get our new name out there was very important to us because it is a very competitive landscape in health care,” said Schultz … The Tampa Bay Buccaneers have that appeal. They’re a local legend. They’re a regional powerhouse in terms of brand. And because of the NFL, they’re a national company as well.” [4] 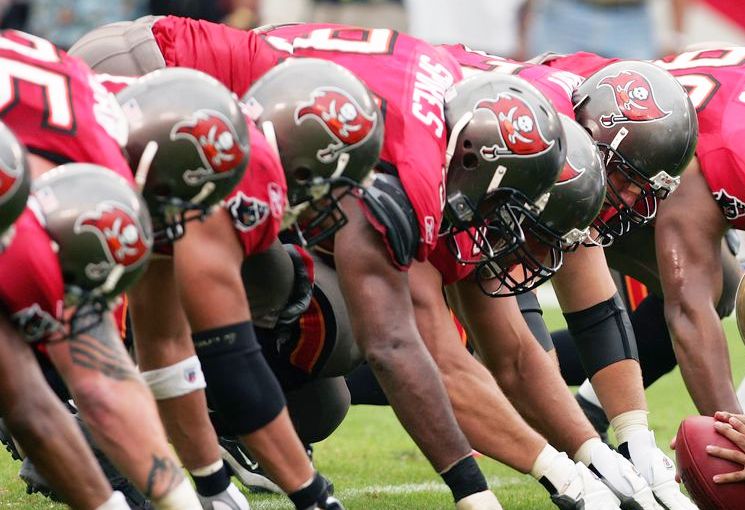 Michael Schultz, Executive Vice President for AdventHealth, also reveals that this partnership with the Tampa Bay Buccaneers was a seven figure deal:

Neither company would disclose how much money AdventHealth will put into the agreement … Asked whether the agreement was for seven figures, hospital executive Mike Schultz said, “Certainly.” [4]

A seven figure financial partnership can be anywhere between $1 million and $9 million dollars. So this is how Seventh-day Adventists can thrive in the highly competitive health care business. This is how we can prosper and grow. The way to succeed is not to follow the inspired counsels given by God’s prophet. The way for our health work to triumph is by entering into multi-million dollar partnerships with the sports industry – an industry that plays games on the Sabbath and openly violates the Lord’s Day. 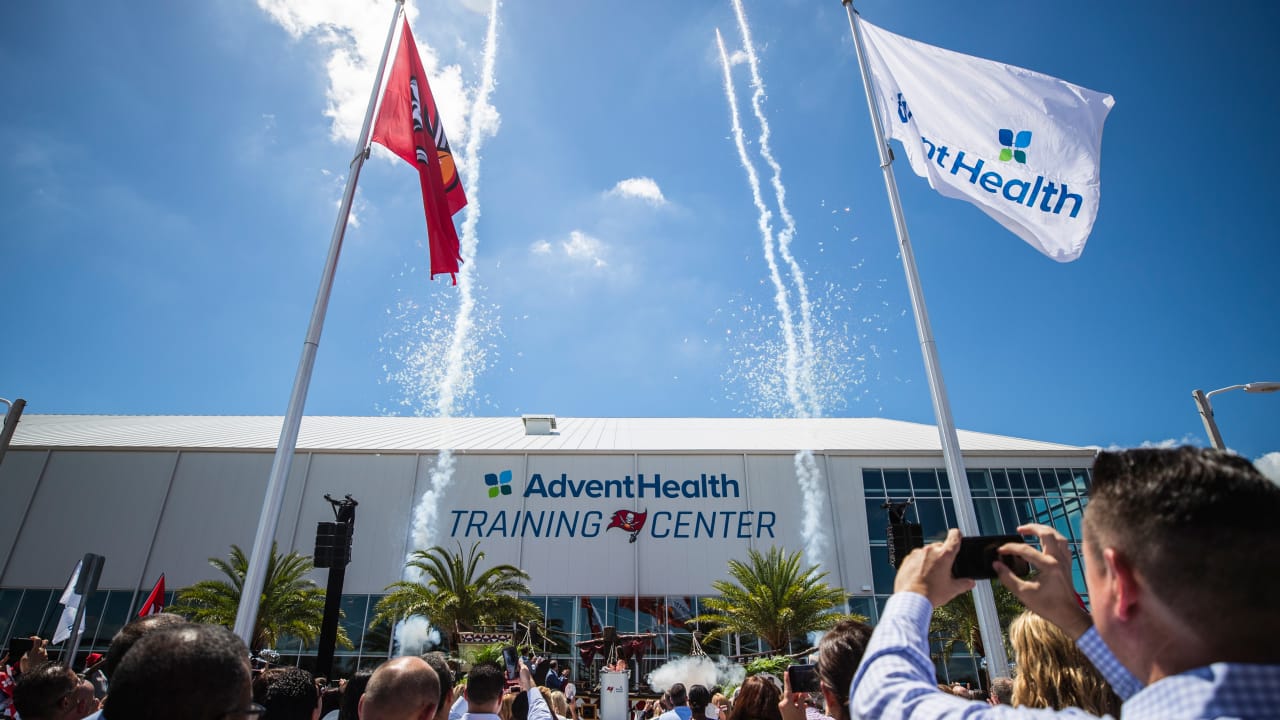 AdventHealth paid a lot of money to place their name on a facility that is open on the Sabbath. The Tampa Bay Buccaneers Training Camp is held inside of the Advent Health Training Center. Tickets are available to the public, and if you look at the training camp schedule they do business on the Lord’s Sabbath. [5] 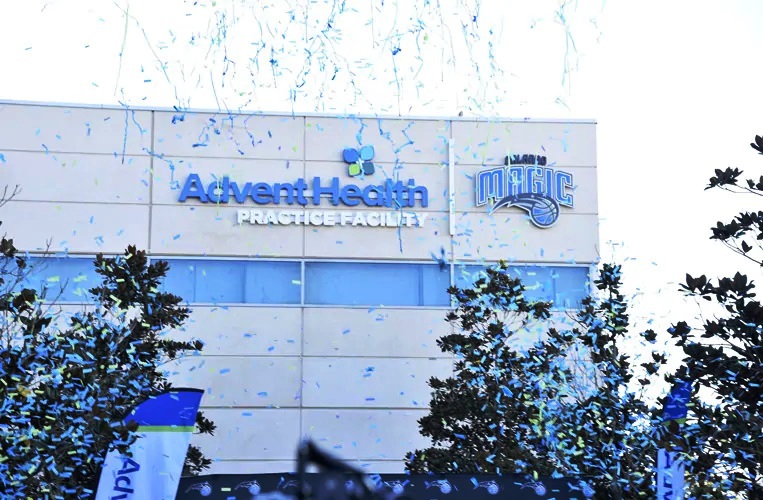 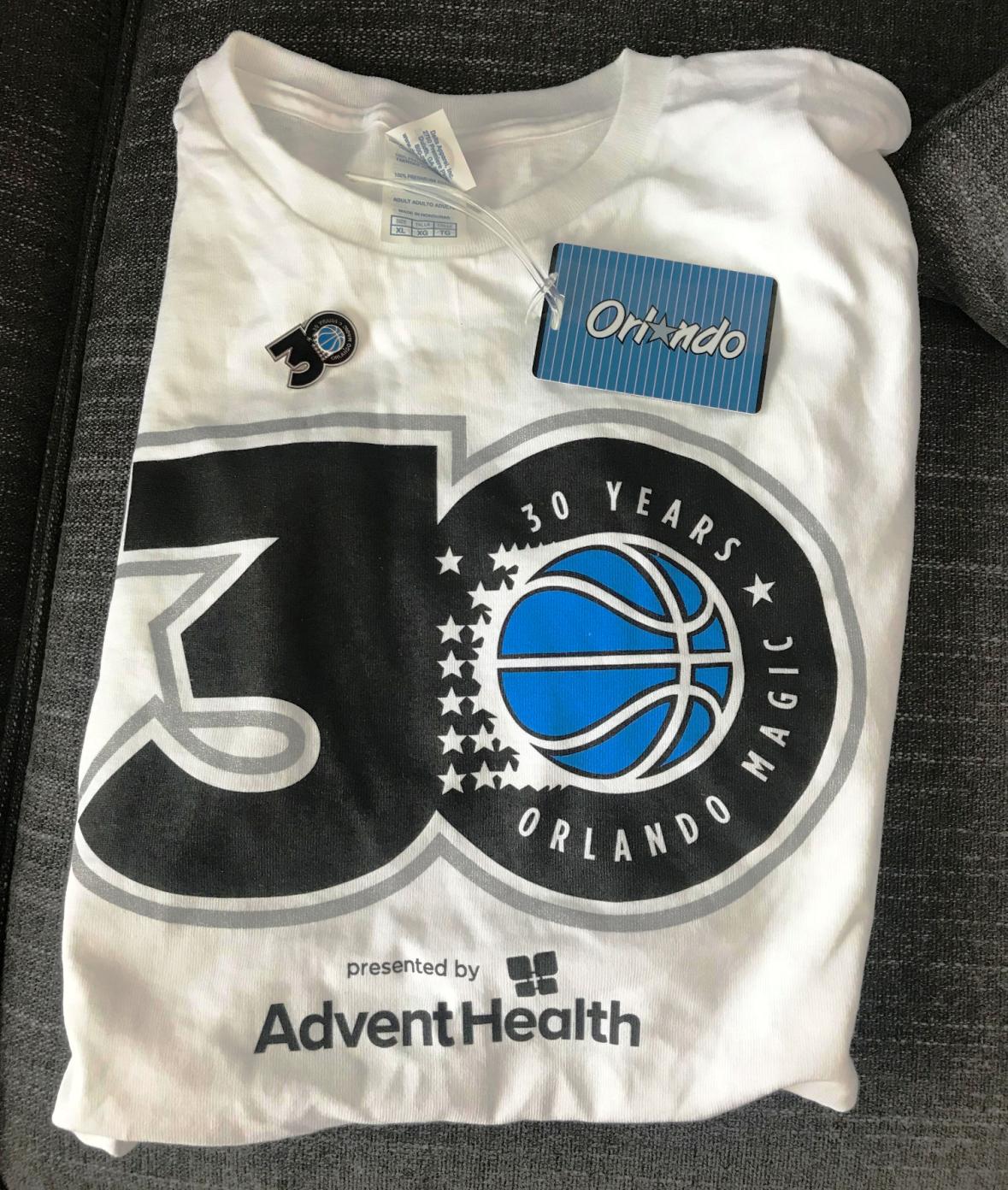 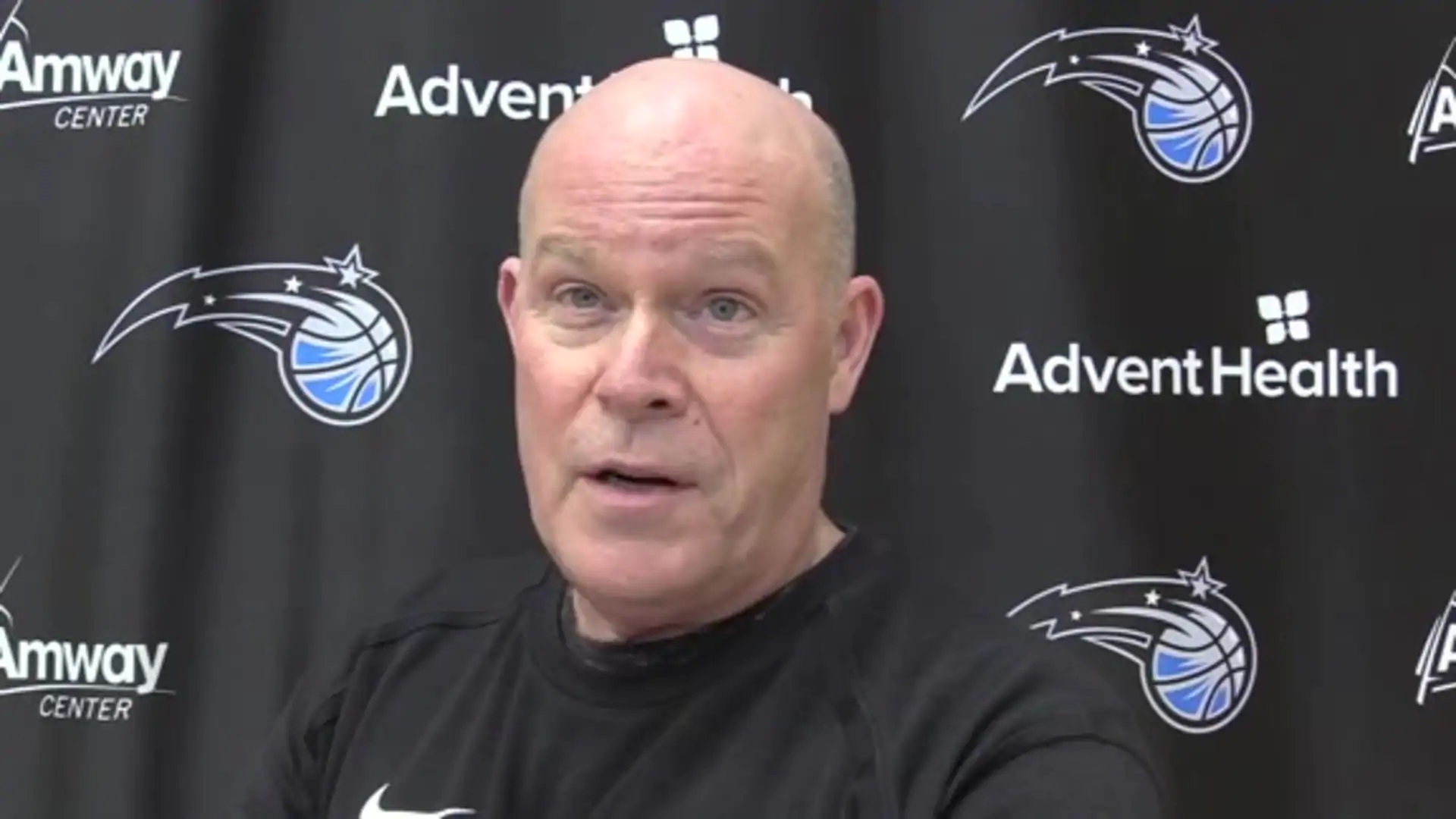 AdventHealth also pays a lot money to participate in the National Collegiate Athletic Association (NCAA) Division I Football teams. [10] They have partnered with the University of Central Florida Knights and pay for placing their logo during their sporting events. [11] Most of the games played by the UCF Knights are on Saturday. [12] 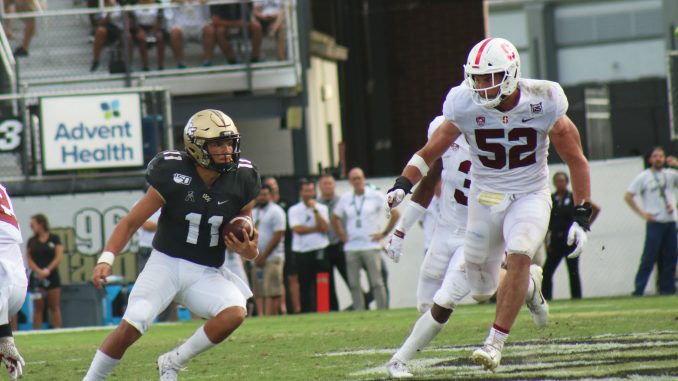 AdventHealth logo in the background during a NCAA football game.

AdventHealth also sponsored not one but two NCAA Bowl Games! They were a corporate partner in the 2020 Citrus Bowl. [13] This bowl game was played on Wednesday, January 1, 2020 between Michigan State and Alabama. 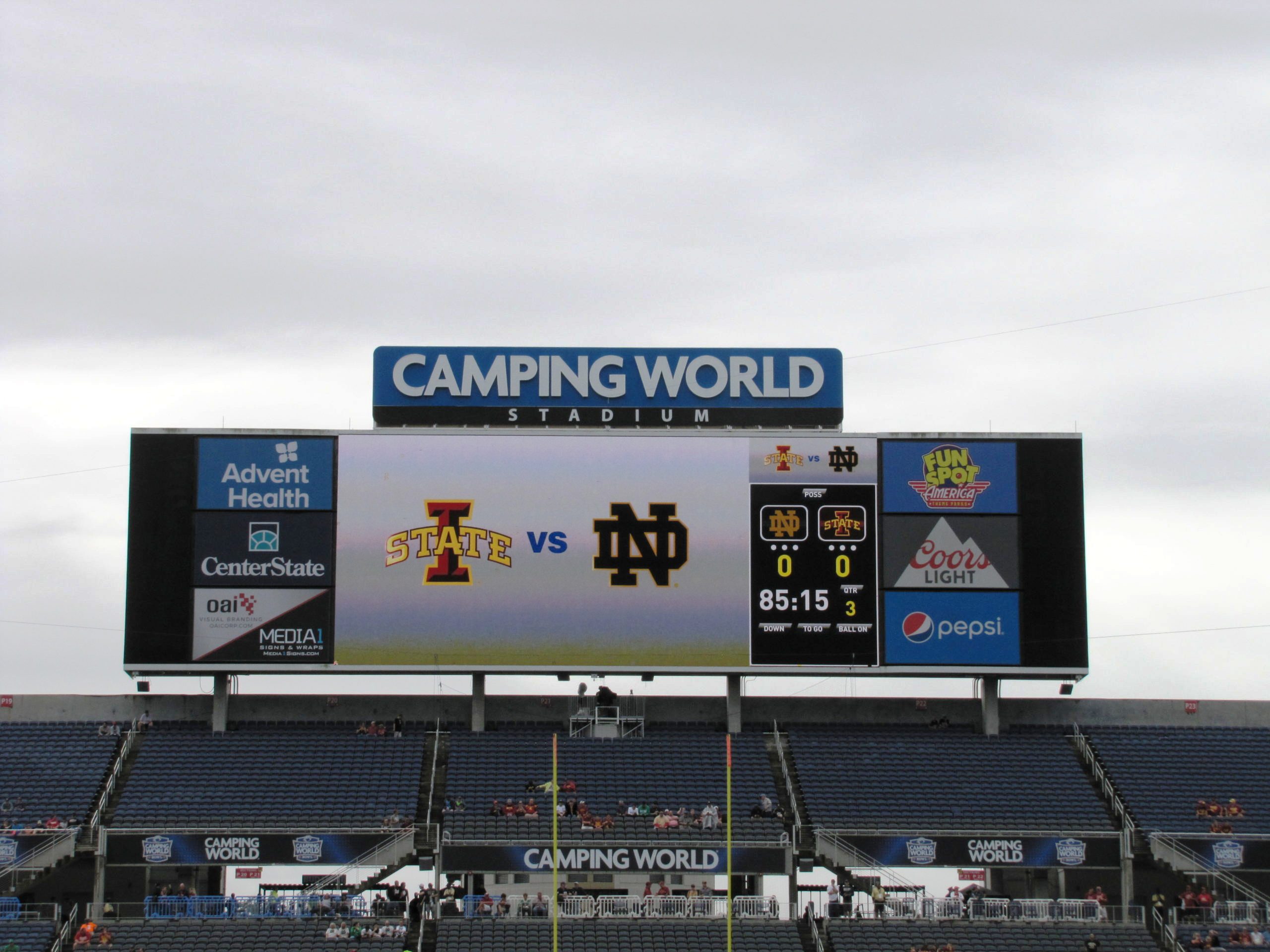 AdventHealth’s logo on the scoreboard just before the NCAA’s 2019 Camping World Bowl game on Saturday afternoon.

So here we go again – paying millions of dollars to sponsor nationally, televised competitive games that are played of the Lord’s Day. Why do we partner with those who have no respect for God’s Sabbath, and why are we paying so much money to promote the “AdventHealth” name? 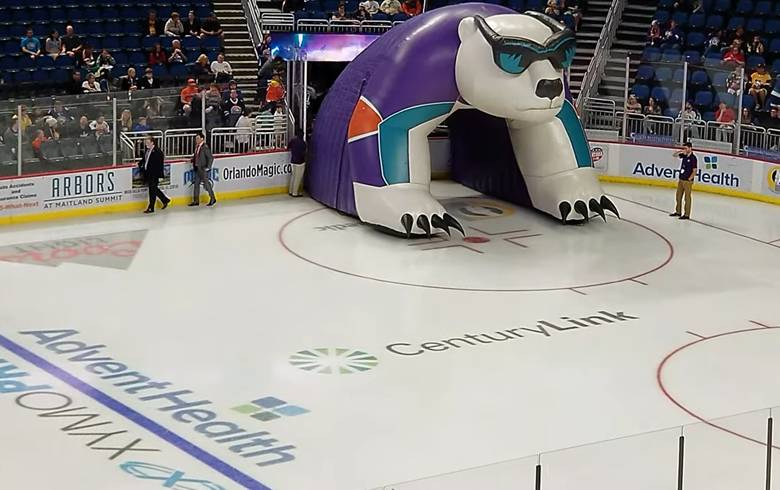 The AdventHealth’s name is both on the back wall and on the floor of the ice during the Orlando Solar Bears’ game. 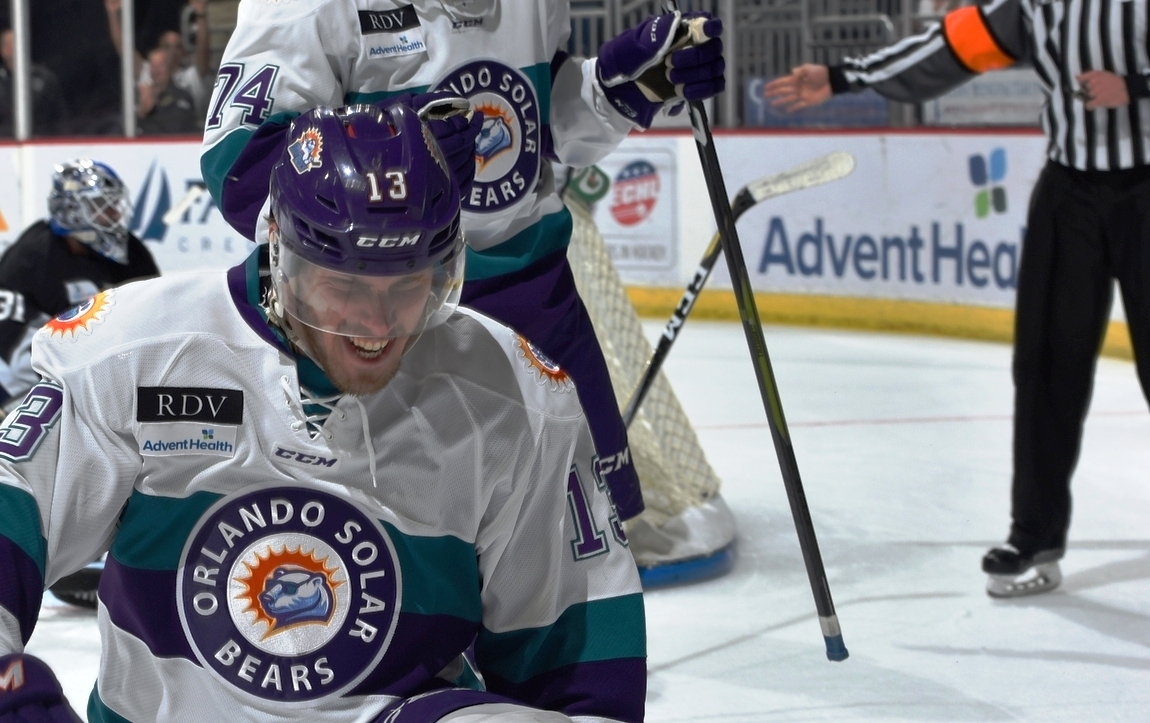 The AdventHealth’s logo is both on the back wall and on the chest of the uniform during the Orlando Solar Bears hockey game.

AdventHealth pays for their logo to appear on the ice hockey rink and on the player’s uniform (See the logo on the player’s chest). As in all professional sport games, the Orlando Solar Bears play most of their games on the Lord’s Sabbath. [17]

On the Orlando Solar Bears’ Facebook page (above) you will see AdvetnHealth’s name both in the description of the post and in the Postgame Report image. 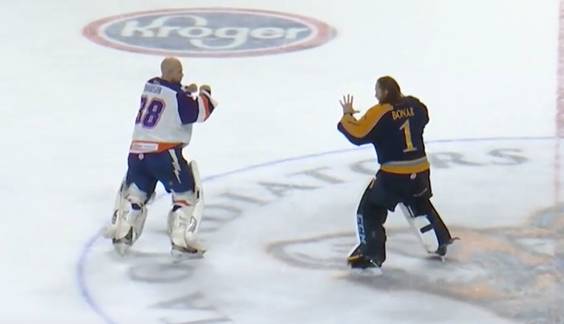 Orlando Solar Bears goalie Clint Windsor (left) and Atlanta Gladiators goalie (right) square up for a fight. Remember, the guy on the left is wearing the AdventHealth logo on his chest. 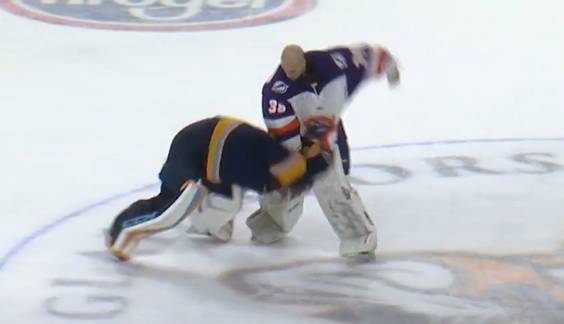 Orlando Solar Bears goalie Clint Windsor totally beats down the other player while the crowd cheers and the referees watch. 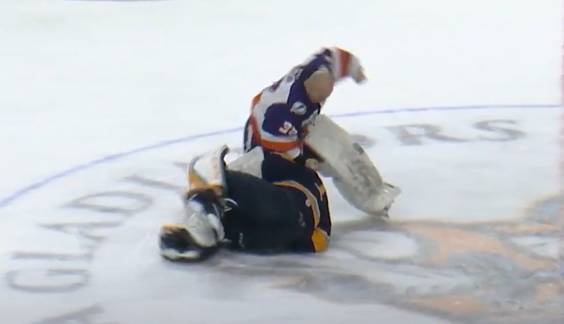 No mercy is given by the Orlando Solar Bears player. Is this what exemplifies Seventh-day Adventist principles and values, and is this worthy of our sponsorship? 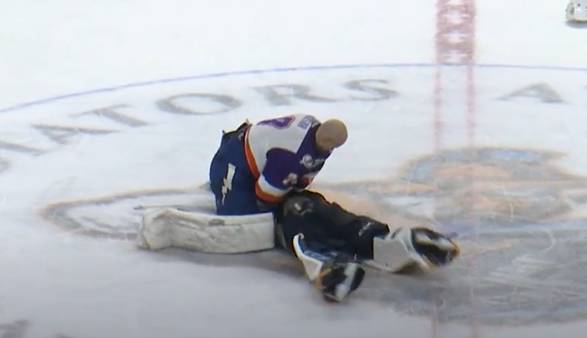 The brutality is outrageous. What’s more reprehensible is how church leaders would pay so much money to promote these events. [18]

AdventHealth is also sponsoring several running events. They have formed a partnership with an organization called Track Shack, a business that is closed every Sunday but holds sporting events on Saturdays! AdventHealth is listed as one of the sponsors at the bottom of Track Shack’s website just above their hours of operation. [19] 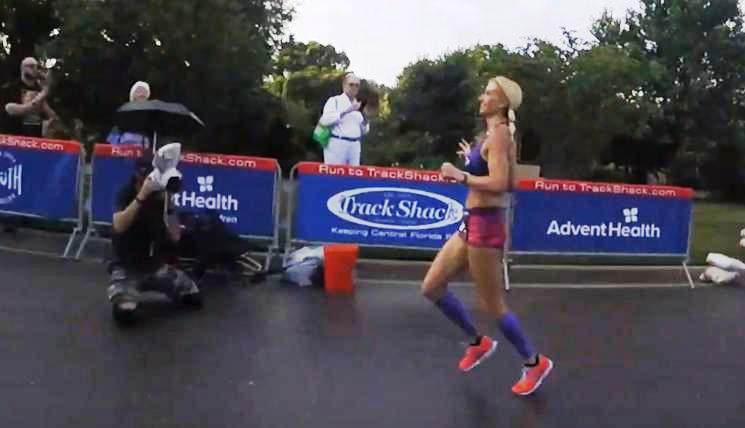 The Track Shack logo next to the AdventHealth logo.

How does this happen? And why are we paying money to join an organization that specializes in Sabbath sporting events? Why can’t Seventh-day Adventists refuse to participate in activities that conflict with the principles of our faith? We are promoting and supporting races that are scheduled on days when people should be in church.

One of these races sponsored by Seventh-day Adventists will take place on Saturday, January 18, 2020. [20] Not only are these events scheduled on the Sabbath but there is also a fee which participants have to pay in order to run in the race. So not only do they run on Sabbath but they have to pay for the opportunity to violate the Sabbath.

Then there is another race scheduled for Saturday, February 1, 2020 that is also supported by AdventHealth. [21] At the bottom of the race’s promotional page (source #21) in the comments section you will see employees from AdventHealth asking for a “discount” code so that they too can pay to run on Saturday. Unbelievable!

AdventHealth is also promoting a third race that is scheduled on Saturday, March 7, 2020. [22] Not only are these races taking place on Saturday but you have to buy a ticket in order to participate. How is purchasing an entrance fee to run on the Sabbath consistent with our Seventh-day Adventist health message? 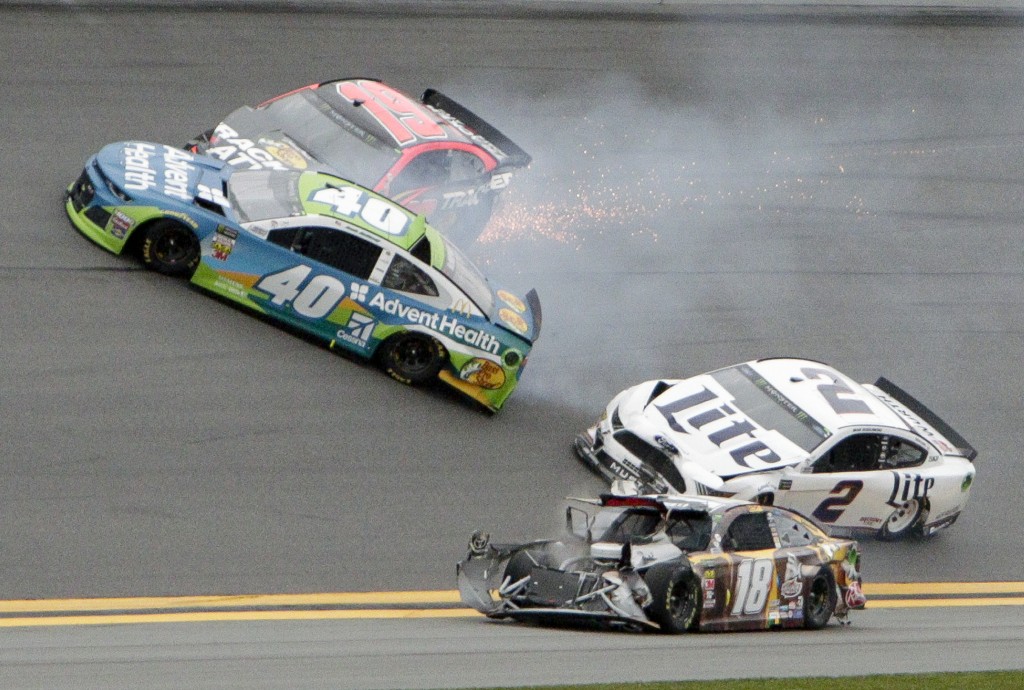 As previously reported in Advent Messenger, AdventHealth has a major sponsorship contract with the Daytona Motor Speedway. [23] They also have their own race cars that compete in these events. In the seven races that AdventHealth will be promoting this year, three of them will take place during the Sabbath hours. AdventHealth is also offering tickets for car racing events that are scheduled to run during the Sabbath. [24]

We also previously reported on the partnership between AdventHealth and the Tampa Bay Lightning professional hockey team. [25] This is the second hockey team that Seventh-day Adventists are sponsoring. Of all the sport teams that the church has signed naming rights contracts with, hockey is the most violent and most brutal. [26] 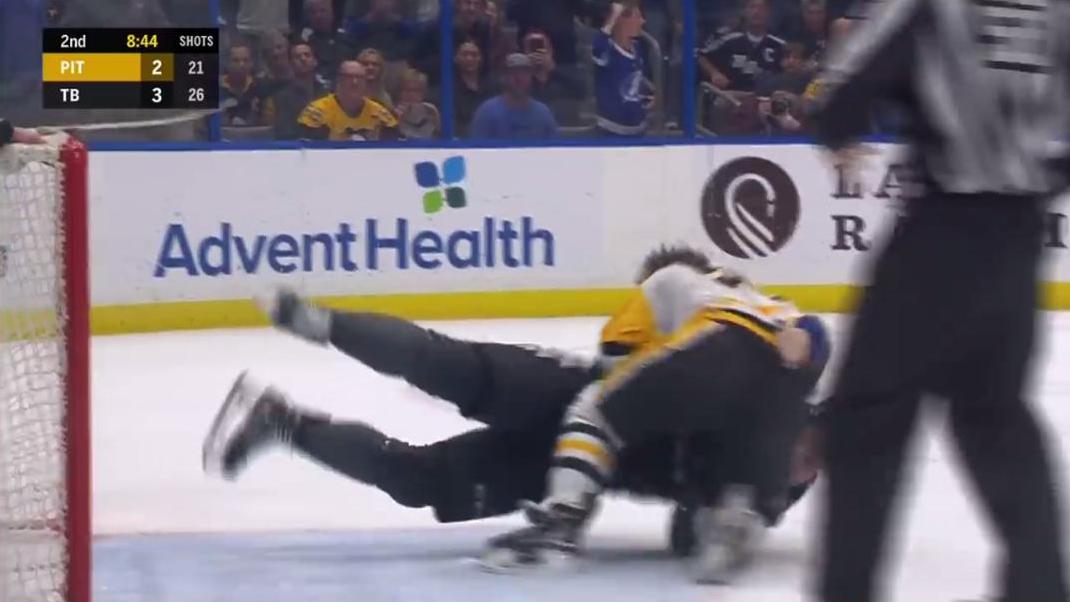 Not only are we partnering with violent sport teams but the Tampa Bay Lightning plays on every Saturday during the regular season. They are the biggest offender when it comes to the Lord’s Sabbath day.

Where Do the Millions of Dollars End Up?

These naming rights contracts are extremely lucrative for the sports teams. Millions upon millions of dollars are being paid in order to enter into partnerships with professional sports in exchange for publicizing the AdventHealth name brand. Stop for a moment and think about where all these millions of Seventh-day Adventist dollars are ending up. The money is first paid out to the teams. Then the teams turn around and use these same funds to subsidize the outrageous salaries that professional athletes are demanding. [27]

What do the athletes do with their money? So many of them use it for vanity – women, cars, drunken parties and mansions. Seventh-day Adventists have to resist all of this. AdventHealth doesn’t own the church, the church owns AdventHealth. They are a church entity which means that they belong to the church. This means that the millions of dollars they generate should be used to promote the church’s mission in the world and not to supplement the lavish/reckless lifestyles of these millionaire professional athletes.

We Are Being Registered in Heaven as Sabbath Breakers

“Others enter into partnership with men who have no respect for the Sabbath. If, for the sake of gain, a Sabbath-keeper allows the business in which he has an interest to be carried on the Sabbath by his unbelieving partner, he is equally guilty with the unbeliever; and it is his duty to dissolve the relation, however much he may lose by so doing” (Signs of the Times, May 20, 1886).

Someone has to “dissolve” the Seventh-day Adventist Church’s invested interest in professional sports. This is a complete violation of God’s 4th Commandant, and many will lose their souls over this. The prevailing attitude today is that nobody really cares enough to actually do something. This means that nothing will likely change. But we are reminded that we cannot come and stand before God to worship Him while our business “partners” are violating its sacred hours:

“Some who claim to be giving allegiance to the law of Jehovah have even gone so far in Sabbath desecration as to unite in partnership with those who have no respect for the Sabbath. The professed Sabbath-keeper may cease his own labors on the Sabbath, but his partner continues the work. How must angels look upon this partnership, as the Sabbath observer kneels reverently before God in the house of worship, while those with whom he is united in business continue their labor just the same as on any other day! How does Heaven look upon the noise and confusion, the sound of the mechanic’s ax and hammer, which ascends instead of thanksgiving, as if in defiance of his injunctions! Can the Lord regard as guiltless the man who thus unites with transgressors?” (Review and Herald, November, 13, 1888).

God’s word says that all of heaven looks upon us as guilty and in “defiance of His injunctions” when our business partners break the Sabbath. Those in responsible positions who have the authority and influence to stop this will be numbered with the transgressors of God’s law if they remain silent or neutral on this issue:

Try to imagine just for a moment the horror that all of heaven feels in the face of such a scandal. Adventism is being scandalized when thousands of mission projects designed to share the Three Angels’ Message go unfunded while millions upon millions of dollars are being given to billion-dollar sports programs that don’t really even need the money.

“Some have been in partnership with unbelievers, and the influence of these Sabbathbreaking associates has had it effect upon them. Some have been so blinded that they could not discern the dangers in such connections … The Lord looks upon him as a transgressor. He will not accept the gifts and sacrifices of those who are thus disregarding His requirements. Even in business relations we cannot, without involving principle, connect ourselves with those who are not loyal to God. The general whom worldlings serve is in deadly opposition to the Prince of life. Satan works through his subjects to ensnare the followers of Christ” (Manuscript, No. 3, 1885).