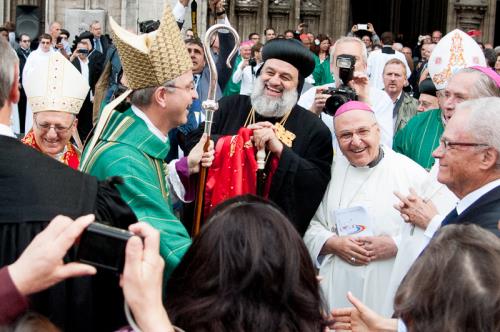 Pope Francis is calling for action, and the churches are responding. Love for the environment is uniting the different religions. The churches are coming together to advocate for a common home and to fight against climate injustice and climate change.

Earlier this year Roman Catholics, Orthodox, Buddhists, Muslims and Seventh-day Adventists joined the Laudato Si’ Circles organization to “unite” in ecumenism for a single purpose. The goal was to show respect for the environment. The meeting took place in Cesena, Italy, where the different religions shared reflections on the importance of caring for the creation. [1] The participants included:

Seventh-day Adventists in Italy are now joining the Catholic Climate Movement called Laudato Si’ Circles to help implement Pope Francis’ encyclical Laudato Si’. [2] The Pope’s encyclical calls for Sunday to be implemented as a weekly day of rest to save the environment. Rome is very pleased when our own people begin to help secure its future Sunday law.

“The first day of the week is not a day to be reverenced. It is a spurious sabbath, and the members of the Lord’s family cannot participate with the men who exalt this day” (Last Day Events, 127).

How many more interfaith worship services will it take before we open our eyes? How many more capitulations and compromises will we make? Women’s ordination, the LGBT+ agenda, ecumenism, Fratelli Tutti, Laudato Si’ – what’s next? The fact that some of our leaders are now doing this is a testament to the utter failure that has arisen in mingling with the other churches. “Mingling is good,” we’re told by many leaders today, but they don’t tell us they’re mingling with the mark of the beast (Sunday).

Tragically, there was no one to speak up in Italy. There was no protest. There was no one there to give the definite, world-wide proclamation that says: “Fear God, and give glory to him; for the hour of his judgment is come: and worship him that made heaven, and earth, and the sea, and the fountains of waters” (Revelation 14:7). And how do we fear God and worship the Creator, not the creation? By keeping His Seventh-day Sabbath (Exodus 20:11).

Two clear voices will be heard as we enter the final crisis, not one. The clear call from Rome that Sunday is the solution to save the planet, and the warning message found in the Third Angel’s Message against the mark of the beast. No Seventh-day Adventist should ever be satisfied until he or she is actively engaged in proclaiming the last message of mercy to the world, and especially when papal encyclicals promoting Sunday are being exalted.

“For though I preach the gospel, I have nothing to glory of: for necessity is laid upon me; yea, woe is unto me, if I preach not the gospel!” 1 Corinthians 9:16.

It is incomprehensible how any true and faithful Seventh-day Adventist can turn their back on God’s message and actively participate in celebrating Laudato Si’, the Pope’s green Sunday law. You can’t mix the faith of the Remnant people with the wine of Babylon. Instead of promoting heresies, man-made doctrines, lawlessness and human traditions, we must warn the millions of people on earth about how to flee from the wrath to come:

“And the third angel followed them, saying with a loud voice, If any man worship the beast and his image, and receive his mark in his forehead, or in his hand, The same shall drink of the wine of the wrath of God, which is poured out without mixture into the cup of his indignation; and he shall be tormented with fire and brimstone in the presence of the holy angels, and in the presence of the Lamb.” Revelation 14:9, 10.

God will always have a faithful minority who will step forward in every crisis to meet the challenge. We cannot commit the fatal mistake of abandoning or disregarding our divinely appointed mission in exchange for peace and unity with the world. Not until our great High Priest finishes His work in the heavenly sanctuary are we to cease warning people day and night about what is coming upon the earth, and most importantly, how to be prepared: