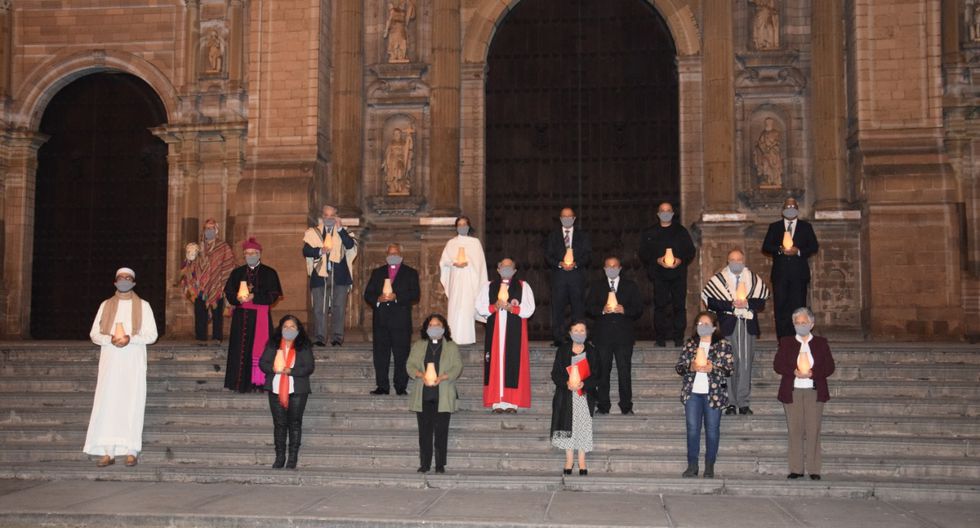 On Thursday, May 14, 2020 in Lima, Peru, the nation’s leading religious leaders responded to Pope Francis’ call and met in the Plaza Mayor. The Plaza Mayor is the political and religious heart of Peru and is surrounded by the Government Palace, the Catholic Cathedral, the Municipal Palace and the Archbishop’s Palace. Pope Francis invited all the world’s religions to join together in a large ecumenical gathering to respond to the COVID-19 pandemic.

The list of participating churches was published by three new sources that offered different accounts of the ecumenical meeting. The first was the Vatican in Rome, [1] the second was the Roman Catholic Archdiocese of Lima [2] and the third was an independent Christian media outlet. [3] The three news sources published the names of the attendees:

Edgardo Muguerza is the Seventh-day Adventist on this list of religious leaders. He is the Director of Religious Liberty and Education for the North Peru Union Mission of Seventh-day Adventists. [4] This is NOT the first time that Edgardo Muguerza has participated in these interfaith events. Just two months ago, he was also featured in a prayer video with politicians, Anglicans, Muslims, Orthodox, Roman Catholics, Mormons, Baháʼí and members of the Brahma Kumaris Movement, an Eastern meditation faith from India. [5]

The Pope’s interfaith meeting on May 14, 2020 in Lima, Peru was more than just praying for the COVID-19 pandemic. This gathering was designed to eliminate centuries-old divisions between Protestants, Catholics, Jews, Muslims and Pagans. In addition to calls for unity and reconciliation, they were promoting pantheism. There was also a call to respect “Mother Earth” and the ecosystems of our planet. The Vatican reported:

We believe in a creator and life-giving God, in shared humanity and in deep respect for Mother Earth, its ecosystems and its forests. Our faith is strengthened in hard times and it is light for the future that we are already building. [6] 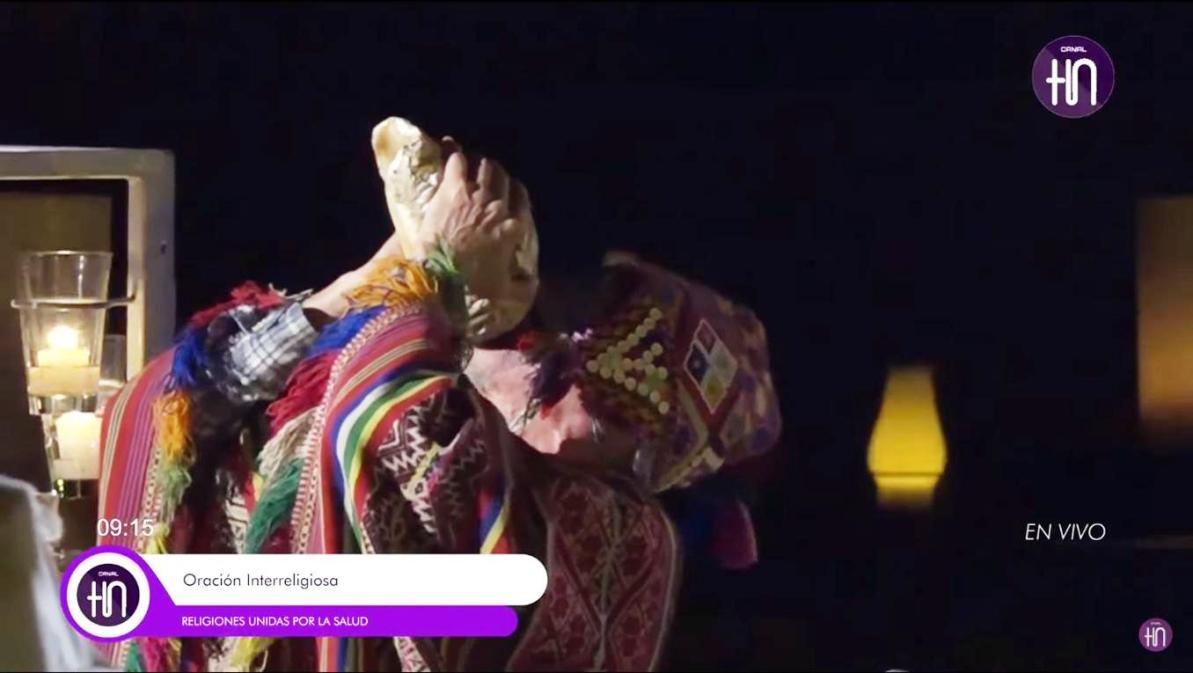 An Amazonian Shaman (guide to the spirit world) participated in this event during a moment of silence for those who died from the coronavirus. The Shaman blew his ceremonial instrument as an offering on behalf of the dead! He blew it 4 times in the 4 directions of Mother Earth: north, south, east and west. This is divination and communication with the spirits. The Vatican also stated:

“The Interreligious Prayer of this Thursday, May 14, had a moment of silence in memory of all those who died in Peru by the COVID-19, while listening to the sound of pututu, an Andean wind instrument. Images of the solidarity actions of religious communities were also projected.” [6]

Pope Francis is exploiting the COVID-19 pandemic by uniting the different faiths during this crisis. Churches not only pray and work together, but Rome is advocating for “solidarity” by calling on all the world’s religions to stand together. The Vatican report concludes:

At the end of the ceremony, a wreath was placed and the Hymn of Joy was sung with the voices of the National Children’s Choir and the National Choir of Peru: “We are united in our faith, hope and solidarity with religious leaders around the world, gathered in Religions for Peace, in a common effort to address COVID-19. [6] 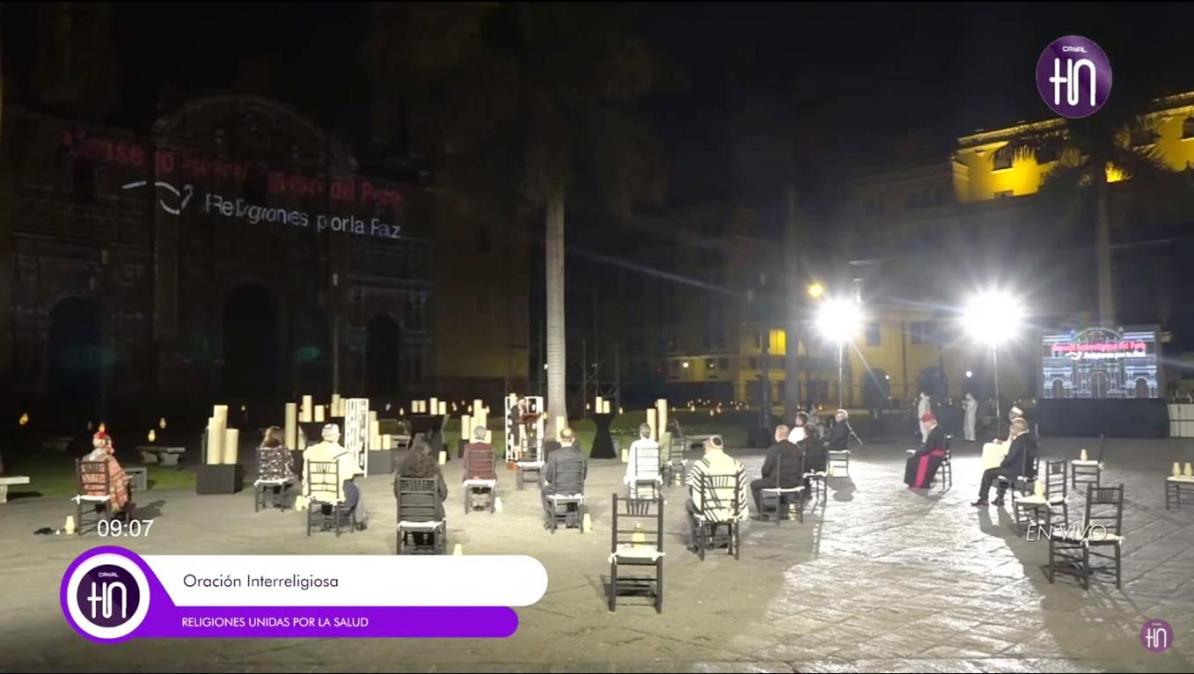 Make no mistake about it, Rome’s ecumenical apocalypse is creating a religious and political climate that will bring about the closing scenes of earth’s history. COVID-19 and ecumenism are paving the way for the coming establishment of the papal new world order and the government of Antichrist described in the book of  Revelation:

“And I saw the beast, and the kings of the earth, and their armies, gathered together (unity) to make war against him that sat on the horse, and against his army” Revelation 9:19.

“And he gathered them together (unity) into a place called in the Hebrew tongue Armageddon” Revelation 16:16.

Prophecy tells us that the beast (papacy) is gathering “together” an army to wage war against the truth, against God and against His people. The Pope’s call for unity is causing Protestants, Muslims, Jews, Seventh-day Adventists and Pagans to come home to the “mother church” in Rome. A globalized, multi-religious society is being created. A forum for the human race is being built with Rome at the forefront providing answers and direction. This will soon lead us to the greatest crisis this world has ever known.

“When Protestantism shall stretch her hand across the gulf to grasp the hand of the Roman power, when she shall reach over the abyss to clasp hands with spiritualism, when, under the influence of this threefold union, our country shall repudiate every principle of its Constitution as a Protestant and republican government, and shall make provision for the propagation of papal falsehoods and delusions, then we may know that the time has come for the marvelous working of Satan and that the end is near” (Testimonies, vol. 5, p. 451).

The effort to unite the churches is based on the emotional and devastating coronavirus crisis. Rome will use any argument, including COVID-19, to achieve her ultimate goal. The purpose is to obtain a mere external unity. Rome’s concept of “together” is not designed to resolve the doctrinal errors of the different belief systems. The true unity that God seeks is achieved through prayer, Bible study, repentance, heart-searching, confession and a putting away of sin. Unfortunately, the modern ecumenical movement is not interested in this.

There is absolutely no indication that the Hindus, Muslims, Jews or even the Amazonian Spiritists who attended this meeting need to embrace Jesus or accept His death on the cross and His mediation in heaven as an atonement for sin. This is leading to the downplaying and denial of our faith. At this time, Seventh-day Adventists would be better served by evangelizing the world with the Three Angels Message of Revelation 14: 6-12 instead of helping to heal Rome’s “deadly wound” (Revelation 13:3).

The false impression that this ecumenical gathering left in Peru is that fallen human nature does not need Jesus, the gospel, God’s moral law or any preparation for the Second Coming of Christ. This is a dangerous deception. Why can’t our people see this? Nature worship, spiritualism and lawlessness are useless schemes that will never lead to purity or righteousness! They will only lead men and women to receive the mark of the beast and the seven last plagues.

What on earth are we doing? The Lord’s coming is the only hope this world has. Let us heed God’s call. Let us keep God’s commandments and carry His final warning message to the whole world, then Christ will come and put an end to sin and heal the universe.