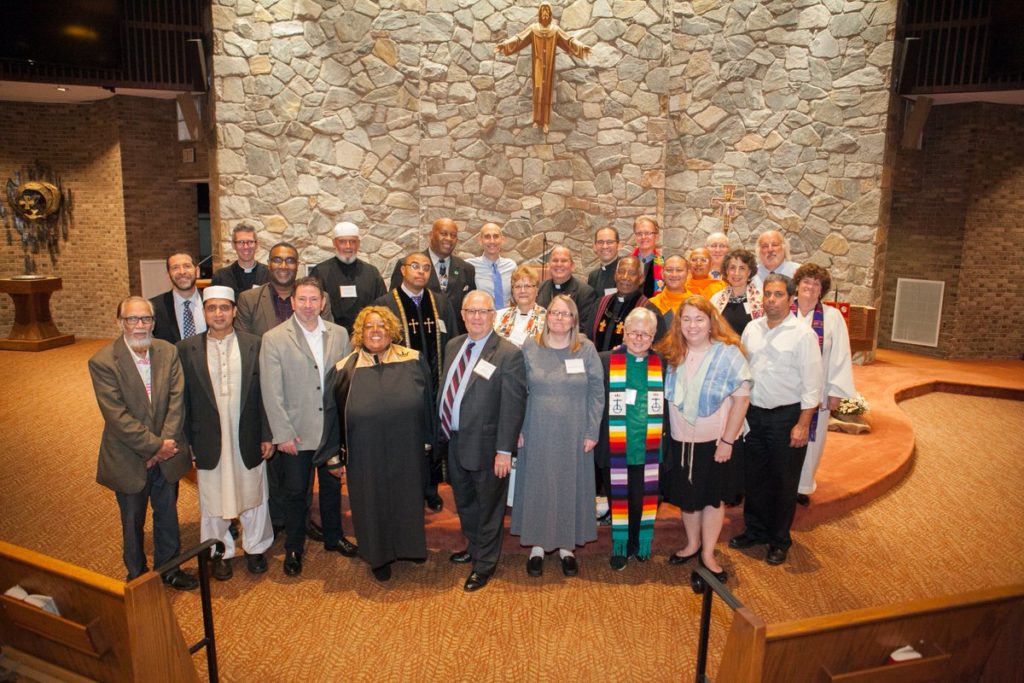 More than 650 members from Christian, Jewish, Muslim, Buddhist, Universalists and other religious communities came together on October 24, 2017 at a Roman Catholic Church. Catholic Priest Michael Saporito hosted the event and welcomed the interfaith participants in a show of unity at the Parish Community of St. Helena in Westfield, NJ.

“It is great to be together with leaders of other faiths,” said Father Michael Saporito. “It is great to bring different people of faiths together, and what faith doesn’t want love, peace and unity?”

The event brought together more than 40 different faith communities together for prayers, songs, fellowship and meditation. Unity and togetherness was the theme for the event.

This “unity” included a coming together with spiritualism. The pagan eastern religion of chanting, yoga and meditation was represented when the Venerable Klint Kevalin of the Dhammakaya Meditation Center in Fanwood, NJ described the event as “Something that the world really needs…We come from different faiths joining together to bring light to the world.”

Seventh-day Adventist Pastor Carl Brewer of the Metropolitan Seventh Day Adventist Church in Plainfield, NJ said, “We should always do what we can to bring us together.”

Timothy Williams of the First Baptist Church in Kenilworth stated, “It is important to come together to offer prayers.”

The Rev. Dr. L.L. DuBreuil, pastor of Faith United Church of Christ in Union, said, “It is important that we get to know each other, pray together and shine the light.”

Imam Khalil Abdul Aziz of Plainfield’s Mosque Masjidullah, agreed, saying, “Here in 2017, I think we haven’t made the effort to get to know each other. We live next to synagogues, churches and mosques, but we don’t really know each other. Interfaith efforts are very productive in bridging that gap.”

Matt Axelrod of Congregation Beth Israel in Scotch Plains said, “Anything that brings us together and shows us what we have in common makes us a stronger community.”

The Rev. Ann Marie Alderman of the First Unitarian Society of Plainfield declared, “Part of our faith is the interconnected web of all beings. We believe that all the various ways to reach the holy are legitimate and it is important for us to work together so the beloved community arrives.”

Rabbi Cecelia Beyer of Temple Beth AhmYisrael in Springfield told the interfaith group, “It is important that we find those things that unite us under one God. It is why events like this are important.”

Without question, we are witnessing a startling phenomena as the world religions are demonstrating an increasing eagerness to unite together with Rome. The event took place a the local Catholic parish. In spite of the major doctrinal and philosophical differences, eastern paganism, Catholicism, Protestantism, Judaism and Islam are showing a growing readiness to cooperate together and even accept the leadership of Rome in a new movement designed to bring peace and harmony to the world.

The significant thing about these ecumenical gatherings is that these religious groups are fulfilling the prophetic picture which the Bible gives concerning the last days of earth’s history. Revelation 13 & 17 depicts the final culminating apostasy when it says “and all the world wondered after the beast” (Rev. 13:3). There is no Scriptural or historical difficulty in identifying this power as the Roman church. This world-wide worship indicates that a global religious and political power is being described.

However, prophecy describes a parallel beast that will also be involved in forcing the world to honor the Roman papacy (Revelation 13:15). Revelation tells us that as the first beast (Rome) becomes a world-wide force, an “image to the beast” (Revelation 13:14), or a second beast would at this very time come into power to accomplish a work of uniting the world. This second power describes the apostate Protestant churches, particularly those in America, that are abandoning their protest and are virtually becoming a reflection and an expression of Catholicism – devoid of any solid Biblical truth.

Now we are seeing the eastern pagan religions, or spiritualism, uniting into fellowship with these two powers. This latter power, spiritualism, is the final component that will breathe a false, unholy spirit or life into this world-wide movement (Revelation 16:14).

“Protestantism shall stretch her hand across the gulf to grasp the hand of the Roman power, when she shall reach over the abyss to clasp hands with spiritualism, when, under the influence of this threefold union, our country shall repudiate every principle of its Constitution as a Protestant and republican government, and shall make provision for the propagation of papal falsehoods and delusions, then we may know that the time has come for the marvelous working of Satan and that the end is near.” (Testimonies, Vol. 5, p. 451).

In this ecumenical event that took place in New Jersey we see these three powers uniting – Rome, Protestantism and spiritualism. They are coming together to show the community that they can work as one. This kind of amalgamation will continue to grow and will lead to the final, end-time crisis. Seventh-day Adventist know this, so why are so many willing to join in this “spirit” of i terfaith unity and cooperation?

While the stage is being set and as the world religions unite, God’s people must stay true to Him and belong to the faithful group of believers described as the “remnant” (Revelation 12:17) which “keep the commandments of God, and have the testimony of Jesus Christ.” This “remnant” is sounding a warning to the multitudes of people who are being blindly led into the final apostasy of Christendom. God’s people will be admonishing the world not to “worship the beast and his image” (Revelation 14:9), and will call all men and women to “keep the commandments of God, and the faith of Jesus.” (Revelation 14:12).

We are not to be slipping steadily into the clutches of the great apostasy. The modern day ecumenical movement is the snare being used by Rome that will bring a resurgence of the first beast. Interfaith unity and cooperation will lead to the unification and crystallization of the “image” of the beast. And because these powers lack Bible truth to support their claims, they will turn to spiritualism to give them an unholy influence and power in an attempt to legitimize their movement.

May God help us to stay away from all these deceptions. May we stand firmly with the faithful “remnant” who will proclaim the final warning against the apostasy of the last days.