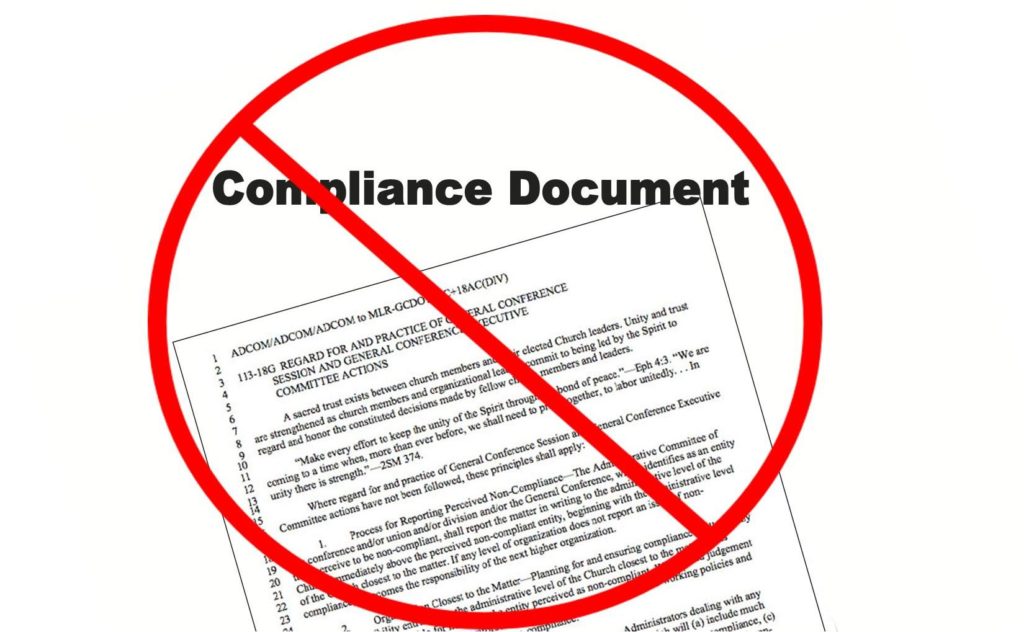 Dan Jackson was speaking to the 2018 Society of Adventist Communicator’s Conference in October and explained that the Compliance Document will have very little effect in changing anything. You can see his speech in the video below.

President Jackson explained that the Compliance Document will be a 3 strikes process starting with Phase 1. According to Jackson, sometime in 2019 a warning of non-compliance will most likely be given to Dave Weigley, President of the Columbia Union Conference of Seventh-day Adventists and to Ricardo Graham, President of the Pacific Union Conference of Seventh-day Adventists. Dan Jackson believes that they will be told that they are out of compliance and will be given 1 year to come into unity with General Conference policy.

After 1 year, Jackson continued, if there is no compliance, Phase 2 would begin in 2020. The General Conference would then add an asterisk (*) next to their names basically stating publicly that Dave Weigley and Ricardo Graham are out of compliance. They would then be given another year to come into compliance.

An asterisk? Seriously? And then another full year?

Finally, if compliance is not forthcoming, according to Dan Jackson, Phase 3 would come into effect and the General Conference would most likely submit a motion to remove these two union leaders, not from church membership, but from having membership in the General Conference Executive Committee. This phase of getting this kind of a motion passed could consume most of 2021, if not more.

But here is the bad news – or good news depending on what side of the issue you are on. Dan Jackson believes that the Compliance Document, during Phase 3, will be defeated and will come to an end because the General Conference won’t have the necessary votes to remove anyone from office.

Dan Jackson explains that the Compliance Document requires a 2/3 majority vote or 66% in order to remove anyone from the General Conference Executive Committee.  He says they don’t have that. Jackson explains that the General Conference passed the Compliance Document with only 59%, much less than the 66% actually needed to remove anyone.

There’s no question that it will be much more difficult to remove non-compliant leaders than it was to approve the document authorizing their removal. If only 59.48% of the General Conference Executive Committee members are determined to bring compliance, then this will not be enough to change anything at the present time.

It appears that the status quo will continue at least for a while. Why should it take up to the year 2021 or possibly 2022 to actually take a vote to remove the non-compliant – and then find out that there aren’t even enough votes to remove them? Somehow, I just don’t see how a three year plan, or more, is the best way to deal with this ordination crisis. How much more will we have to endure before anything is actually done?

One thing is certain, Ellen White described accurately the movement that would attempt to change the faith. She said: