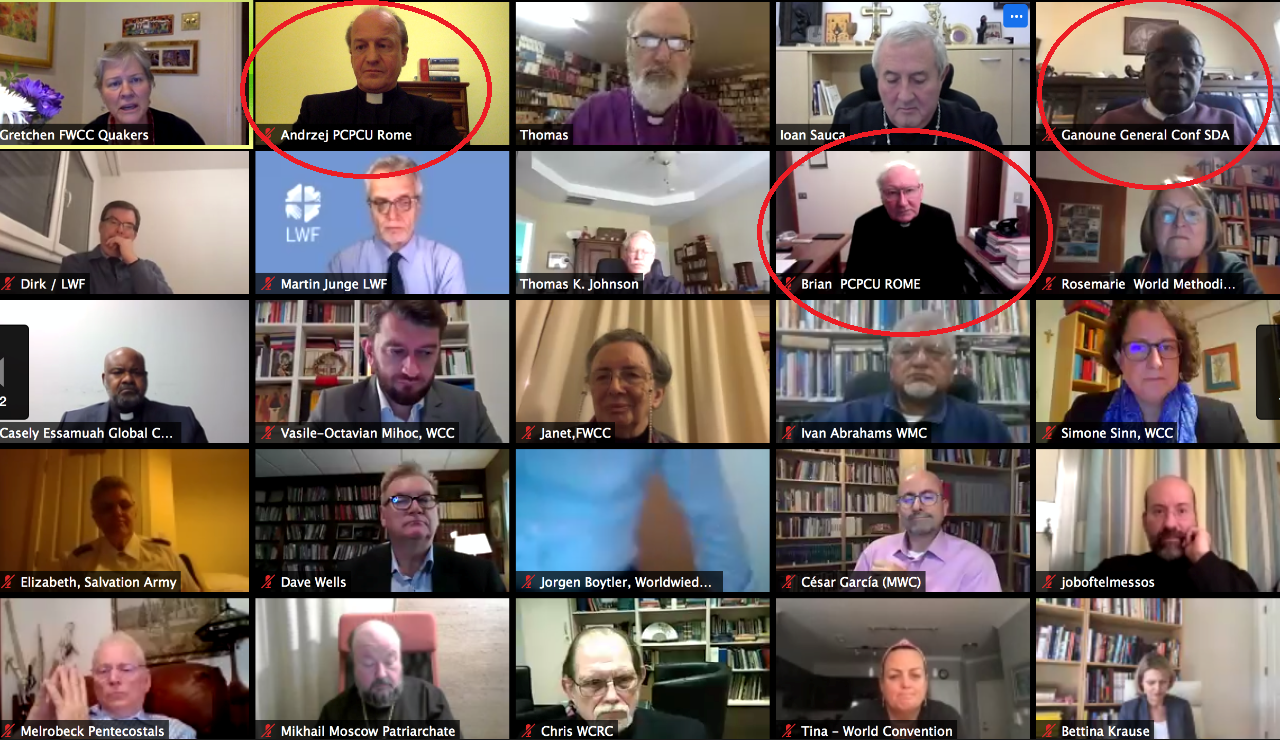 The pope is working overtime to unite all of the religious faiths of the world into one family. Pagans, spiritualists, Mother Earth worshippers, homosexuals, Protestants, Catholics, indigenous faiths and eastern religions are all part of Rome’s one-world brotherhood. Truth and doctrine no longer matter anymore according to the Pope’s encyclical, Fratelli Tutti.

Just yesterday, Roman Catholics, Evangelicals, Orthodox and Seventh-day Adventists gathered to praise Fratelli Tutti.  Over thirty religious leaders met at the annual Conference of the Secretaries of Christian World Communions (CS/CWC) from 20–22 October 2020. Ganoune Diop was the acting secretary for this gathering. The Vatican reported the following news:

“The Catholic Church was represented by Bishop Brian Farrell, Secretary of the Pontifical Council for Promoting Christian Unity, assisted by Reverend Andrzej Choromanski, staff responsible for the multilateral relations. The meeting was chaired by Reverend Gretchen Castle (Friends World Committee for Consultation), with Reverend Dr Ganoune Diop (General Conference of Seventh-day Adventists), acting as secretary … The recent encyclical of Pope Francis Fratelli Tutti was acknowledged as an important encouragement to all Christian communions to unite efforts in building a culture of encounter, solidarity and universal fraternity across political, social, and religious borders.” [1]

“Fratelli Tutti? Where is the protest? There was none. Are we now praising papal encyclicals? Is our loyalty now to the Pope of Rome and to his falsehoods and delusions? Is it the mission of the General Conference to set the final warning message aside and join hands with all the religions of the world and promote Rome’s message? That is exactly what happened yesterday. Pope Francis is healing the deadly wound (Revelation 13:3), and this involves eliminating truth that exposes Rome’s agenda. If Rome can achieve this then her objective is complete and Protestantism will finally be dead, including our people.

Worse yet, Spiritualism has now joined the Pope’s brotherhood. We are wholeheartedly embracing the Omega of apostasy, which is pantheism. We were warned over 100 years ago that this would happen. Instead of comprehending this warning, instead of conforming our lives to this warning and instead of communicating this warning, we have joined the following “three-fold union.” We have embraced “papal falsehood and delusions” (Fratelli Tutti). Satan is about to unleash his “marvelous workings.”

“Protestantism shall stretch her hand across the gulf to grasp the hand of the Roman power, when she shall reach over the abyss to clasp hands with spiritualism, when, under the influence of this threefold union, our country shall repudiate every principle of its Constitution as a Protestant and republican government, and shall make provision for the propagation of papal falsehoods and delusions, then we may know that the time has come for the marvelous working of Satan and that the end is near” (Testimonies, vol. 5, p. 451).

Fallen, erring mortal men are not above the word of God. Or do we think that our leaders know more than the prophets who spoke in the name of the Lord? Our loyalty is not to Rome, but to the word of God. Sadly, the apostasy in the church will only get worse and will continue until the Lord descends from heaven:

“One thing it is certain, is soon to be realized—the great apostasy, which is developing and increasing and waxing stronger and will continue to do so until the Lord shall descend from heaven with a shout … We may be strengthened and confirmed in the past experience that holds us to the essential points of truth which have made us what we are—Seventh-day Adventists” (Letter 326, December 4, 1905).

A Diabolic Attempt at Damage Control

Here is how the church attempts to do damage control. This is all preplanned. While Ganoune Diop was praising and promoting papal encyclicals with Rome’ agents on October 20-22, 2020, at the same time and on the very same day, he was feeding a different narrative to Seventh-day Adventists on October 21, 2020 about the need of “mingling” with the other churches. On one side, while Diop was praising the Pope’s message, on the other side he was telling Seventh-day Adventists in an article published in the Adventist Review that if we don’t mingle with the other churches “we will disassociate ourselves from Jesus.” [2]

This is a premeditated attempt to use religious liberty as a fig leaf to cover up blatant apostasy. Israel didn’t apostatize because they were simply mingling with other people or having conversations with them. Israel sinned when they started engaging in pagan inter-faith worship services. Israel transgressed for building bridges and promoting paganism with the other nations:

“It was by associating with idolaters and joining in their festivities that the Hebrews were led to transgress God’s law and bring His judgments upon the nation” (Patriarchs and Prophets, p. 458).

Ganoune Diop is not mingling. He was serving as the secretary for a meeting in which Rome’s delusions and falsehoods were being applauded and promoted. The fact is that Ganoune Diop is in a teacher/student relationship at a Roman Catholic seminary. This is not mingling; this is “nurturing.” Diop is a pupil and he is being trained, disciplined and indoctrinated by the agents of Rome. He is now praising and promoting papal encyclicals and on the same day he tells Adventists we need to mingle with Rome if we want to be with Jesus.

Why didn’t Gaoune Diop praise Fratelli Tutti in the Adventist Review article? Why didn’t he tell the readership where he was or what he was doing? This makes his report in the Adventist Review dishonest. It makes his attacks against faithful Seventh-day Adventists repugnant and scandalous. It shows that he is a politician. It shows that he is not being sincere with God’s people. He ought to do the honorable thing and apologize. Then he should resign or be fired.

“In reviewing our past history, having traveled over every step of advance to our present standing, I can say, Praise God! As I see what God has wrought, I am filled with astonishment and with confidence in Christ as Leader. We have nothing to fear for the future, except as we shall forget the way the Lord has led us, and His teaching in our past history” (Testimony to Ministers, p. 31).

Our only safety is to hold fast to our past experience that made us a people. It is hardly surprising that men like Ganoune Diop and others are pulling us away from our historical mission. Papal falsehoods and delusions have replaced so much of what God has established through the efforts of our pioneers. We may give lip service to the “Three Angels’ Message” but we have broken away from our past experience .We have become divorced from our past history and are betraying the founders of the great second advent movement.

We are also betraying the millions of sincere Christians who gave their lives for the Protestant faith during the Roman Catholic Inquisition. We are basically saying that they died in vain. We spit on the graves of those who died for the Protestant faith. Can we afford to betray those who gave their lives for our historic faith? Or, can we afford to betray the God whose hand was guiding them? We had better not.

Below is an adapted version of the poem entitled “First They Came” to illustrate the spiritual crisis we are in. May God preserve the spirit of Protestantism as we endeavor to keep the flame alive:

First Rome came for the Orthodox, and I did not speak out—

Because I was not an Orthodox.

Then Rome came for the Lutherans, and I did not speak out—

Because I was not a Lutheran.

Then Rome came for the Reformed Churches, and I did not speak out—

Because I was not a Reformed Christian.

Then Rome came for Seventh-day Adventists—

and there was no one left to speak out for us.