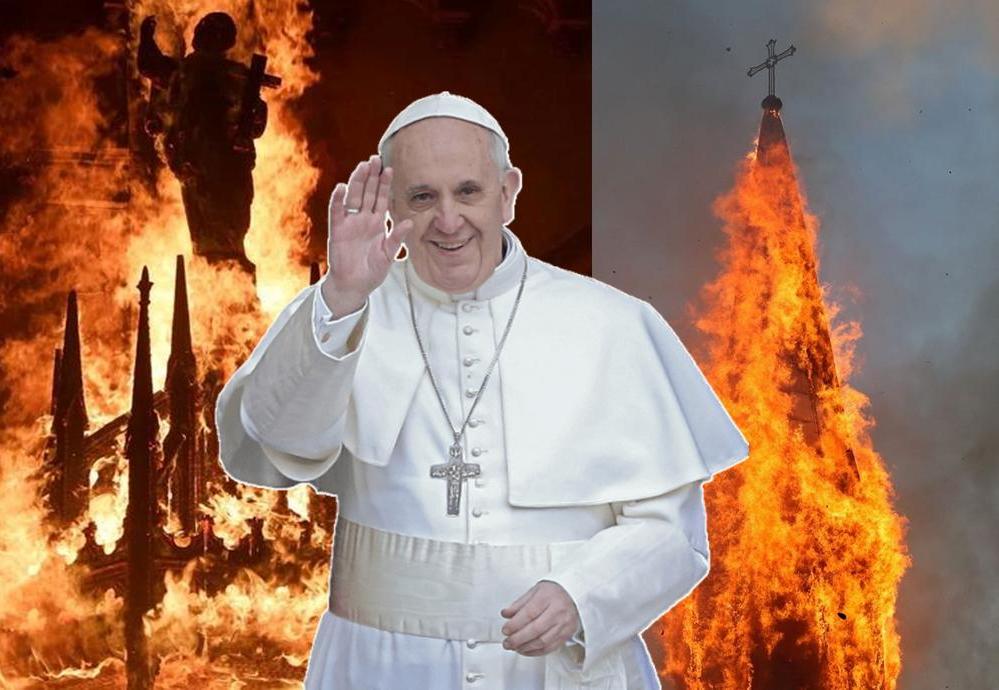 Pope Francis has been pushing a radical, socialist, leftist and globalist agenda in his two most recent papal encyclicals, Laudato Si’ and Fratelli Tutti. The Pope has been pandering to revolutionaries by advocating an ultra-left agenda that denounces capitalism, borders and nationalism. But these same radicals in Chile are burning Catholic churches anyways.

CHILE | Antifa Celebrates the destruction of the church in Santiagopic.twitter.com/okbvkLbDPO

Tens of thousands of rioters gathered in cities across the country of Chile as masked protestors attacked police, vandalized property, looted stores and set Catholic churches on fire. The chaos comes as the nation prepares to vote over whether to change the nation’s constitution.

SANTIAGO, CHILE – Tens of thousands of Chileans gathered in the central square of Santiago to mark the one-year anniversary of mass protests that left over 30 dead and thousands injured, with peaceful rallies on Sunday devolving by nightfall into riots and looting, pic.twitter.com/dcolnmzNrt

This isn’t protesting. This is a revolution. These are not protesters, these are anarchists. These are the same far left, anti-government radicals similar to the ones we have here in the United States who are advocating violence, looting stores, attacking the police and promoting mayhem. Over 30 people have died during the recent reign of terror in Chile. [1]

All of this is being done by radicals in the name of ending “inequality.” [2] These are the same tactics used during the French Revolution that are being repeated today. During the French Revolution, the motto of the radicals was “Liberty, Equality and Fraternity.” [3] There was a period called France’s Reign of Terror in which there were massacres, anarchy, public executions, riots, looting and burnings. Crimes against humanity were carried out in the name of “inequality.” Those days are back.

Scenes from the French Revolution.

In his recent encyclical, Fratelli Tutti, Pope Francis has absorbed the ideas of the French Revolution “Liberty, Equality, Fraternity” and is using them as part of his plan for our world, but on a planetary scale. Just before Section #103 of Fratelli Tutti, the words: “Liberty, Equality, Fraternity” are included in the Pope’s encyclical. [4] Pope Francis is trying to lead the world into a new era of brotherhood that is based on Catholic social teachings. This is the new revolution that will help establish the policy of a “common good” that the Pope is trying to implement.

And either the extreme radicals in Chile have not read or understood Fratelli Tutti, because if they had, they would not have advocated a revolution or the burning of Catholic churches; or they have read Fratelli Tutti and are using the terror tactics of the French Revolution, “Liberty, Equality, Fraternity”, to eliminate the undesirables from the coming universal brotherhood.

“God’s word has given warning of the impending danger; let this be unheeded, and the Protestant world will learn what the purposes of Rome really are, only when it is too late to escape the snare. She is silently growing into power. Her doctrines are exerting their influence in legislative halls, in the churches, and in the hearts of men. She is piling up her lofty and massive structures in the secret recesses of which her former persecutions will be repeated. Stealthily and unsuspectedly she is strengthening her forces to further her own ends when the time shall come for her to strike. All that she desires is vantage ground, and this is already being given her. We shall soon see and shall feel what the purpose of the Roman element is. Whoever shall believe and obey the word of God will thereby incur reproach and persecution” (Great Controversy, p. 581).