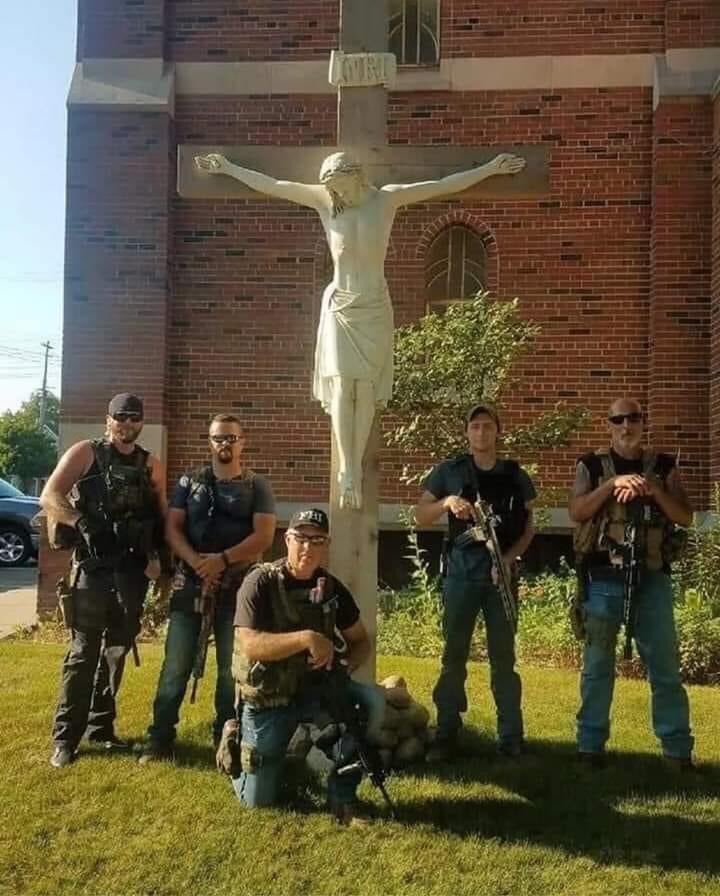 Is this what our world is coming to? Some churches are starting to publicly arm themselves in order to protect their properties and congregations. Religious communities across America watch in shock as congregations and churches are under attack. [1] In the message published below, parishioners are putting would-be anarchists on notice: If you attack our churches you are playing with “fire.”

You better think twice if you think that we will allow you to destroy our Sacred places and Sanctuary! Anyone attempting to damage our Catholic Churches in America will be playing with fire 🔥 pic.twitter.com/sth9uBpKmT

“God is permitting the elements of confusion and disorder to bear sway for a season. A power from beneath is working to bring about the last great scenes in the drama … Transgression has almost reached its limit. Confusion fills the world, and a great terror is soon to come upon human beings. The end is very near. We who know the truth should be preparing for what is soon to break upon the world as an overwhelming surprise” (Testimonies, vol. 8, p. 28).

Changes are coming to our world. A “global confusion” and “disorder” is preparing the way for a “great terror.” Trouble is in the air. Apprehension is everywhere. Changes can sometimes be good; sometimes it’s bad. Change is necessary in terms of one’s spiritual life. The Bible can help us change our pain for peace, our sorrow for joy and our sins for Christ’s pardoning grace. In these instances change is good. But there are other changes, changes that are not good; changes that are in fact very bad.

“Thus saith the LORD of hosts, Behold, evil shall go forth from nation to nation, and a great whirlwind shall be raised up from the coasts of the earth.” Jeremiah 25:32.

“For the indignation of the LORD is upon all nations, and his fury upon all their armies.” Isaiah 34:2.

There are people who intend to create mass chaos by disrupting civilization and turning the citizens against each other. Some well-funded anarchists and their associates (main stream media) and some bad cops are creating fear by fanning the flames of hate, race and color. This is the very definition of domestic terrorism. The present conflict and division that we see developing around us is indeed terrible—far more terrible than anything we have seen since the Civil War.

The citizens of the United States are responding by arming themselves. Gun sales are at record levels. Even some churches have become weaponized as church-goers are not feeling safe in their houses of worship. There is scarcely a state or a major city that has not been affected in some way by this present struggle. And it seems like this conflict will not be short-lived. We are in a situation that our generation has not been in before. Jesus said this would happen and the implications will be similar to a Civil War:

“Now the brother shall betray the brother to death, and the father the son; and children shall rise up against their parents, and shall cause them to be put to death.” Mark 13:12.

“And except that the Lord had shortened those days, no flesh should be saved: but for the elect’s sake, whom he hath chosen, he hath shortened the days.” Mark 13:20.

All indications seem to show that we are entering the final crisis-hour of the ages. This civil commotion has set the religious and political world on edge. Leaders are scrambling to respond to the increasing threats of violent disturbances. During this time the souls of men and women are being tried in the furnace of fire. Time is about to run out and our destiny will be decided by the attitudes and character that we are now developing. A work of purification is needed at this time in the life and work of God’s people:

There needs to be today, on the part of believers, an earnest commitment to accomplish the work that we have been given. This is our solemn responsibility at this time. We have the precious truths of the Three Angels’ Message to give to every person, proclaiming the soon coming of Jesus. While the world is preoccupied with elections, revolution and chaos, let us fulfill our duty to prepare a people to be ready for this glorious event.

“And then shall they see the Son of man coming in the clouds with great power and glory.” Mark 13:26.