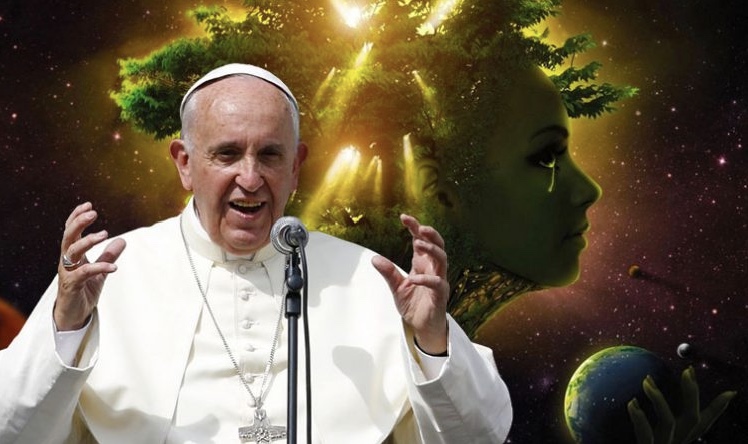 Dr. Charlie Camosy is part of the Theology Department at Fordham University, a premier Jesuit institution in New York City. [1] He recently published an article in which he claims that our world has about 10 years to “dramatically curb our carbon emissions before we reach a tipping point.” Jesuit professor Dr. Charlie Camosy argues that in “light of this emergency” we must work to “pass dramatic legislation” to prevent the coming climate “disaster.” [2]

What “legislation” is he referring to? He says that the “Green New Deal” being proposed by Democratic politicians has “zero chance” of passing, but he claims that Pope Francis’ Laudato Si encyclical is “far more superior” for “immediate legislative approaches.” In other words, this Jesuit agent is saying that the Pope’s green Sunday law (Laudato Si) is the best solution for the climate crisis and should be legislated right now!

After a lengthy praise and assessment of Laudato Si, Dr. Charlie Camosy says that the Pope’s document is the only answer to all our problems. He also revealed that he believes in about “10 years” or “perhaps even faster” Laudato Si will be embraced through legal enactment. He calls it “life changing legislation,” and compares the Pope’s encyclical to the “power” of changed “hearts” during the legalization of “same-sex marriage.”

Dr. Charlie Camosy said that it only took 10 years (2004-2014) to change our “culture” with regards to gay marriage. He is hoping that our nation can also experience an ecological conversion in a similar time-frame. He believes this will happen when we commit ourselves to an “ecological education” in the “school, in families, in the media, in catechesis (churches) and elsewhere.” Dr. Camosy concludes his article with the words, “Let’s get to work.”

It has begun. The Jesuits are saying that the Pope’s green Sunday law is coming in 10 years or less. This is their projection, not ours. They are hoping that through a massive “ecological education” campaign that the hearts and minds of the people will be changed to accept Laudato Si – and they have already started.

All this has been prophesied. We are seeing the final events starting to take place. Notice how inspiration makes the connection between a climate crisis and a Sunday law. We are seeing the fulfillment of the following statement written over 100 years ago:

“In accidents and calamities by sea and by land, in great conflagrations, in fierce tornadoes and terrific hail-storms, in tempests, floods, cyclones, tidal waves, and earthquakes, in every place and in a thousand forms, Satan is exercising his power. He sweeps away the ripening harvest, and famine and distress follow. He imparts to the air a deadly taint, and thousands perish by the pestilence. These visitations are to become more and more frequent and disastrous” (Great Controversy, p. 590).

Notice how the proponents of Sunday will link these climate calamities with the “Sunday-Sabbath.”

“It will be declared that men are offending God by the violation of the Sunday-sabbath, that this sin has brought calamities which will not cease until Sunday observance shall be strictly enforced, and that those who present the claims of the fourth commandment, thus destroying reverence for Sunday, are troublers of the people, preventing their restoration to divine favor and temporal prosperity” (Great Controversy, p. 590).

This manufactured climate crisis is being created to help bring about a National Sunday Law. Sunday, the counterfeit Sabbath, the mark of apostasy is being disguised as the only solution to save our society from destruction. All of this continual agitation for ‘Laudato Si’ is the master plan of Rome to conceal her true intention and to establish its ecclesiastical supremacy worldwide by dominating both church and state.

It is during this time that the Third Angel’s Message is supposed to gain power and strength. These events will stir God’s people into action and they will raise up the standard of truth – the commandments of God and the faith of Jesus (Revelation 14:12). The final warning message will be proclaimed to the world through pen and voice and through the lives (testimony) of a peculiar people.

“But as the question of enforcing Sunday observance is widely agitated, the event so long doubted and disbelieved (coming Sunday Law) is seen to be approaching, and the third message will produce an effect which it could not have had before” (Great Controversy, p. 605).

What we are seeing today is a global deception being perpetrated by religious and civil organizations. They are coming together to save the world by pushing for the Pope’s green Sunday law – in ten years or less! May God have mercy upon us all and may He help us to wake up and get ready for what will soon take place. It is now time for everyone to see through all the lies and to know that the end is near.