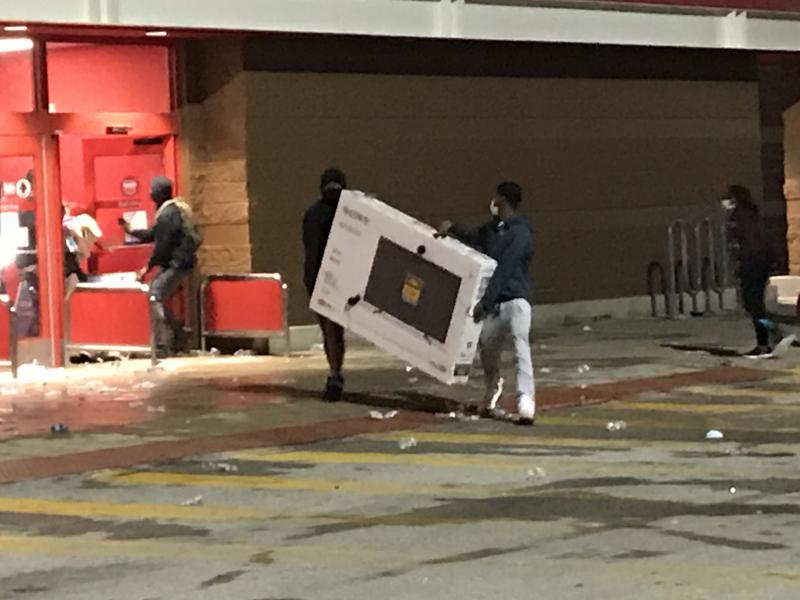 We are being told that these poor souls are only doing this because they’re deeply hurting over the death of George Floyd.

These are not protesters. These are opportunists. This is shameful. pic.twitter.com/UWVt3Pn6B5

A legitimate protest is protected by the First Amendment of the United States Constitution. Citizens have the “right to petition government for redress of grievances.” This means that we can even complain about our government without fear of intimidation or retaliation. Unfortunately, legitimate protests over the death of George Floyd have been hijacked.

The anarchy, civil disorder and riots that have spread everywhere, from coast to coast, have nothing to do with the death of George Floyd. What we see on the streets of the United States today are three groups: legitimate protesters, domestic terrorists (Antifa) and street criminals.

For the past seven nights in a row, thousands across the United States have been on the streets – NOT holding hands, singing, participating in prayer vigils or lighting candles. No. Thousands have been on the streets burning cars, breaking windows, burning houses and businesses, looting stores and causing chaos. These are not protesters. They are gangs of rioters that attack people and businesses and destroy property.

Dozens of suspected looters spilled out from a Boost Mobile store in Van Nuys today, many getting away with apparently stolen goods in hand. Nearby, police declared an unlawful assembly and began dispersing a large crowd of protesters https://t.co/wvk4tBncba pic.twitter.com/OkxaBwFpqb

Let me remind you of my position on the subject of George Floyd. When George was handcuffed and lying on his stomach, he was in a position where he couldn’t fight back or defend himself. George was at the mercy of a homicidal police officer. The policeman had a knee to his neck and was restricting George’s breathing. You can hear the poor man gasping for breath and begging the police officer to stop strangling him to death.

Then George Floyd began to cry for his mother because he was dying. George was not resisting or fighting and he was deprived of his right to breathe. I personally don’t know why this police officer is not being charged with first degree murder. But that’s where I stand on this issue. Most Americans and most people around the world believe that this should never have happened.

"The people in Polk County like guns. They're gonna be in their homes tonight with their guns loaded. And if you try to break into their homes to steal, to set fires, I'm highly recommending they blow you back out of the house with their guns." pic.twitter.com/YxAUt3z5lc

But now, we are seeing violent and radical street criminals trying to destroy our society. Our country is on fire and our police are vastly outnumbered. What we are seeing today has nothing to do with justice. Innocent people are being targeted. We are seeing the result of a deeply sown division and hatred that has been building for a long time from all sides. There is a lawless movement at play that is exploiting the death of George Floyd and who want to tear down what took 250 years to build. They are well-funded and well-organized and are determined to overthrow all of our constitutional rights.

When you riot, you ruin the lives of innocent people. pic.twitter.com/hMi2RRNlsS

Many of the looted stores will not return. Jobs have been lost forever as businesses were destroyed. What took years to accumulate was lost in a few nights of rioting. This is hurting minorities as they have nowhere to turn. This poor lady cries because all the food stores are gone and there is no more public transport to get around.

We need to pray for our country, but what are we supposed to pray for? Unity? Peace? We are supposed to be one nation and one people uniting on core, common principles. But how do we unite when we have people in the nation who have no problem setting fires, stealing other people’s things and attacking the innocent? Others defend these methods, support and justify them. So what kind of unity can we have with people who think like this? What are we unifying around?

In order to have a country there has to be some kind of commonality. There must be a shared fundamental value that is free from homicidal cops, racism, domestic terrorists and street criminals. We used to believe that God had a divine plan for all of us. Americans used to be a people who found faith and purpose in their Maker. God’s word reminds us that:

“Blessed is the nation whose God is the LORD; and the people whom he hath chosen for his own inheritance.” Psalm 33:12.

The nation that honors Jehovah is under His protection and becomes a happy and desirable nation. God created humanity. And when humanity honors God, He blesses them. Unfortunately, today God has blessed us, but we have rejected Him and His word and He will respond by removing His blessings:

“The LORD is with you, while ye be with him; and if ye seek him, he will be found of you; but if ye forsake him, he will forsake you … And in those times there was no peace to him that went out, nor to him that came in, but great vexations were upon all the inhabitants of the countries. And nation was destroyed of nation, and city of city: for God did vex them with all adversity.” 2 Chronicles 15:2, 5, 6.