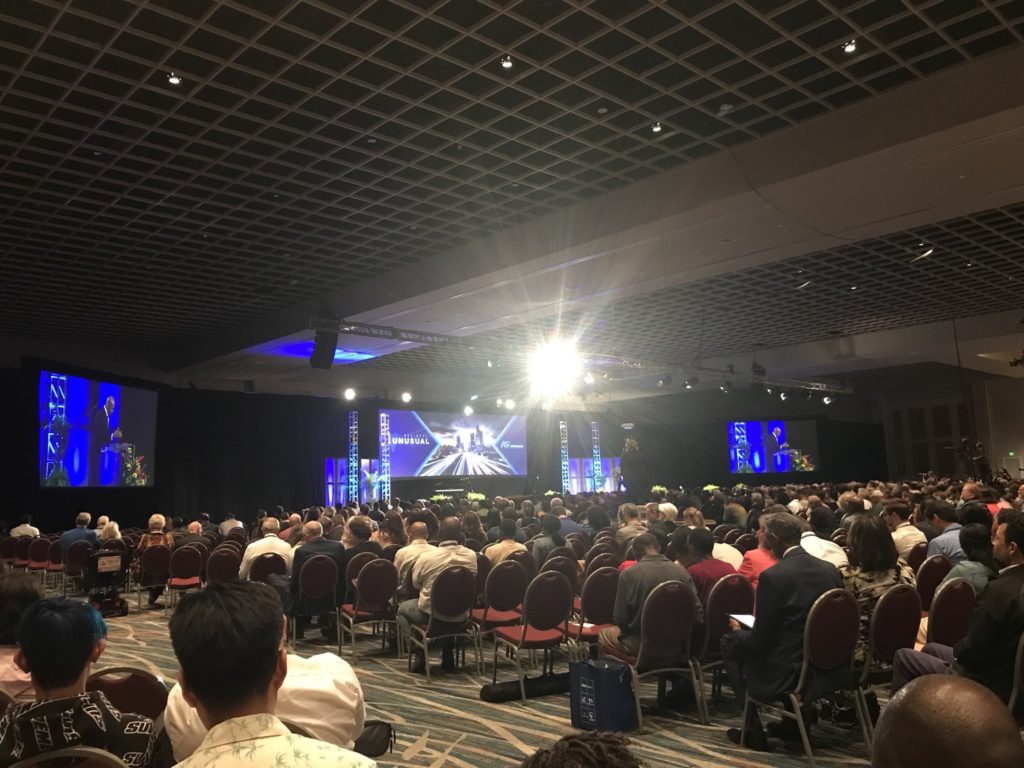 The 2018 Adventist-laymen’s Services & Industries [ASI] International Convention took place this weekend at the Rosen Shingle Creek Resort in Orlando, FL. The ASI convention was held from August 1-4, 2018. ASI is an organization made up of Adventist laypeople, business professionals and self-supporting ministries who are committed to taking the everlasting gospel of Revelation 14 to the world. This year there were around 2,000 people in attendance who met in Orlando and approximately 500 exhibits on health, archeology, prophecy, education, media ministry, evangelism, foreign missions and other work from around the world. It is exciting to see so many business professionals on fire for the Lord.

Self-supporting ministries will most definitely form part of the closing work because many of them are in a unique position to operate without the restrictions or controls often found within the denominational work. Because self-supporting workers don’t receive their salaries from the church, they are free to work as soon as God’s opens the doors for gospel missions. You will be amazed at how quickly things can get done when the work is not tied down by committee meetings. This is one of the tremendous advantages self-supporting workers have.

There is also greater freedom and liberty to speak one’s mind when your salary doesn’t depend on the denomination. Self-supporting workers generally have more flexibility to address “issues” affecting the church that most salaried pastors wouldn’t even dare touch. There is tremendous pressure upon salaried workers to not “rock the boat.” This means that many will not speak out on matters that are causing spiritual decay and disunity within the church today for fear of reprisals. This pressure is minimized for self-supporting workers because their employment is not at risk. They are free to: “Preach the word; be instant in season, out of season; reprove, rebuke, exhort with all longsuffering and doctrine.” 2 Timothy 4:2.

God’s work is going to get done with or without us. God’s people will be purified and fitted for the outpouring of the Latter Rain during the closing work. It is only our privilege to be involved. However, if we refuse to prepare ourselves to be used by God, if we do not have a love for lost souls and if we have no desire to take the gospel invitation to our communities – then “others” will be chosen to bear these important responsibilities and we will be left out.

“It was not the will of God that Israel should wander forty years in the wilderness; he desired to lead them directly to the land of Canaan, and establish them there, a holy, happy people. But ‘they could not enter in because of unbelief.’ [Hebrews 3:19.] Because of their backsliding and apostasy, they perished in the desert, and others were raised up to enter the promised land. In like manner, it was not the will of God that the coming of Christ should be so long delayed, and his people should remain so many years in this world of sin and sorrow. But unbelief separated them from God. As they refused to do the work which he had appointed them, others were raised up to proclaim the message” (Great Controversy, p. 458).

Is it possible that these “others” described in this statement include various self-supporting entities who are on fire for evangelism? Yes. There is no question that God will bless any and all “self-denying” efforts made to save the lost.

“Self-denying efforts will be put forth to save the lost, and many who have strayed from the fold will come back to follow the great Shepherd. The people of God will draw together, and present to the enemy a united front…. The love of Christ, the love of our brethren, will testify to the world that we have been with Jesus and learned of Him. Then will the message of the third angel swell to a loud cry, and the whole earth will be lightened with the glory of the Lord” (Evangelism, p. 693).