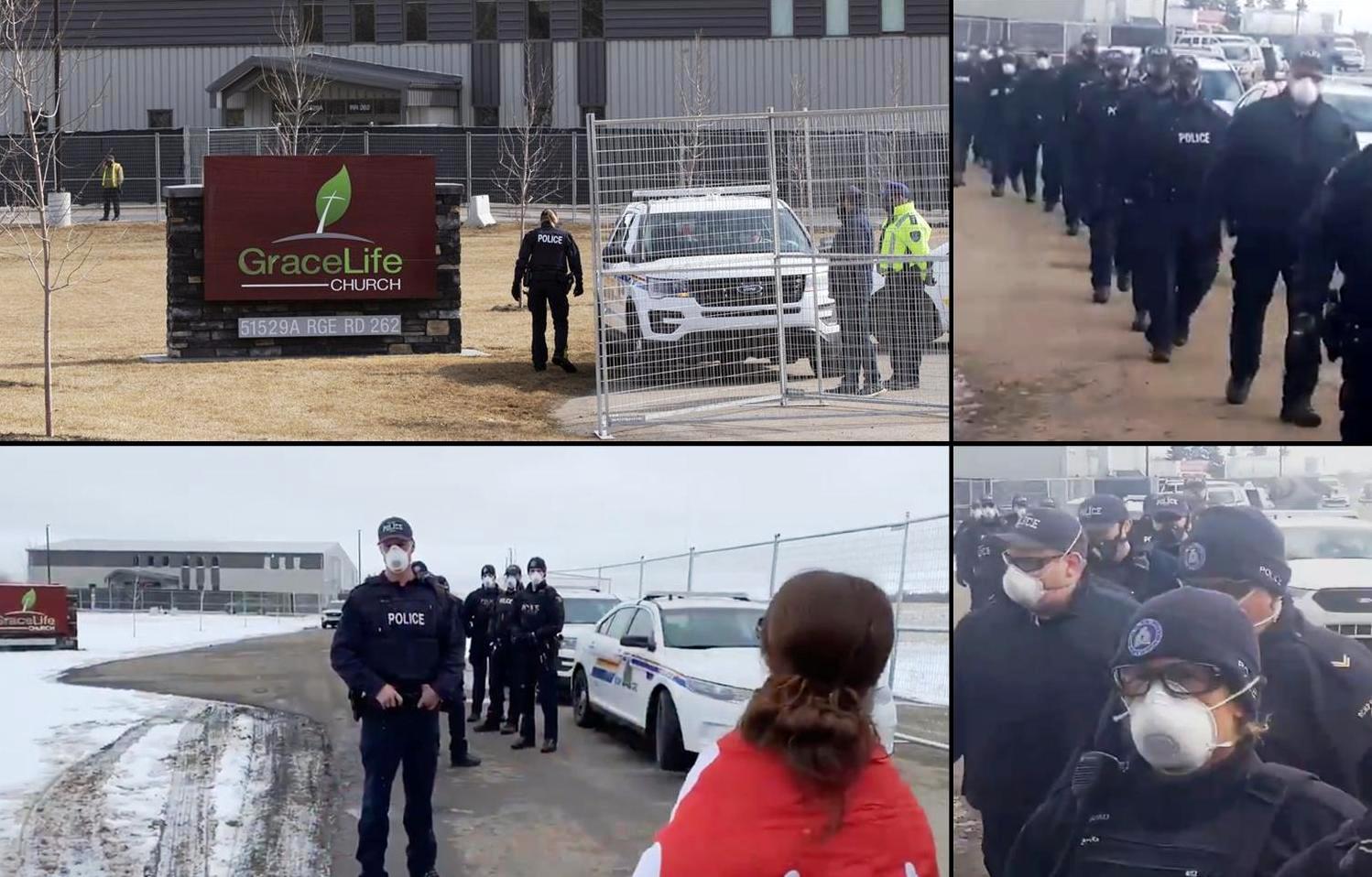 Regulations made by the local government in Alberta, Canada are overriding the freedom of worship. The Canadian government has restricted the number of people who can gather in church during the pandemic. GraceLife Church has refused to recognize the new health regulations that limit churches to just 15% of capacity. As a result, the church’s pastor was arrested and spent a month in jail and the church has been closed and fenced off by authorities for violating health regulations during a pandemic. [1]

Dozens of police vehicles have blocked the access roads surrounding the church. So now the members have been left without a place to worship. The members of GraceLife Church have begun conducting worship services at undisclosed secret locations. They have become the first underground Christian church in North America, as their members refuse to stop holding services in defiance of the Canadian government. [2]

So here is one solitary Protestant church standing up for its beliefs, while the national denominations in Canada are in full compliance with government health regulations. Since when does a “HEALTH REGULATION” imposed by politicians nullify the fundamental rights of worship without the approval of the legislature? Here we have a “MINISTER OF HEALTH” with the power to imprison Canadian citizens for ANYTHING. Will Sunday soon become a mandatory day of rest for the “HEALTH” of the planet? You better believe it.

We are learning that this so-called pandemic is radically changing our societies, so much that a “HEALTH MINISTER” can enforce anything they want to, without providing any evidence that Gracelife Church has posed any threat to anyone. The “science” behind the pandemic comes from the same scientists who say we evolved from monkeys. These are the same “scientists” that say the world is billions of years old and that a full-term fetus is not a baby, just tissue. These “scientists” also believe that men can get pregnant and have babies.

These are the same scientists who believe that the climate change is the greatest crisis facing our world and that actions to save the planet is needed immediately. So it is no big surprise that many don’t trust the political motives behind a “science” that wants to end capitalism, eliminate borders, establish socialism, promote sex-reassignment surgeries for children, push feminism, adopt the LGBT+ agenda, legalize euthanasia, support abortion on demand, eliminate CO2 and disconnect people from their faith by closing down their worship services.

The Constitutions and Bill of Rights of nations no longer mean anything during a so-called crisis:

“We hold these truths to be self-evident, that all men are created equal, that they are endowed by their Creator with certain unalienable Rights, that among these are Life, Liberty and the pursuit of Happiness.–That to secure these rights, Governments are instituted among Men, deriving their just powers from the consent of the governed.” The Declaration of Independence, Second Continental Congress, Philadelphia, Pennsylvania, 1776.

Our Founding Fathers made it clear that God is the source of our rights and freedoms. It was God who gave us the right to worship, not man. Our government didn’t give us anything. The government’s job is to protect the rights which God gave us. The purpose of having a “Bill of Rights” is to limit the power of government from taking away certain freedoms. Our rights don’t come from any elected official or non elected bureaucrats. They come from God alone. We don’t need permission from anyone to worship or to preach the gospel. God has already commanded these in His word.

The Founding Fathers also made it clear that just powers of government can only come from the consent of the governed. The word “consent” is found 3 times in the US Declaration of Independence and 11 times in our US Constitution. Obviously, the Founding Fathers didn’t want the government to exercise its powers without our consent. These are the Protestant principles of our Constitution that are disintegrating before our eyes. The government’s use of power without our consent is tyranny.

Revelation 14:6-12 contains God’s last message of mercy to the world and includes a warning message against tyranny. As lawlessness and tyranny increase, God’s people must acknowledge God’s sovereignty above kings and rulers and proclaim His commandments and His gospel. As the signs of the times are being fulfilled, God’s church must throw off the shackles of bondage and quit trying to please everyone. Instead, let’s submit to the everlasting gospel of Jesus Christ (Revelation 14:6-12) and preach it in all its fullness, which is the answer to all the wickedness and tyranny we are seeing today.