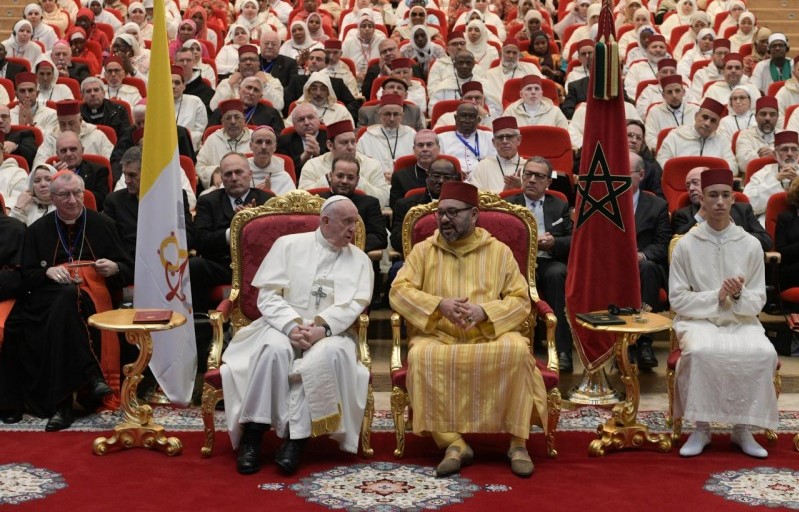 During his March 30-31, 2019 visit to Morocco, Pope Francis delivered the message that the church shouldn’t try to “convert” Muslims but instead it should “live in brotherhood” with them. [1]

“Francis has used his two-day trip to stress inter-faith dialogue. He has also backed Moroccan King Mohammed VI’s efforts to spread a form of Islam that promotes inter-religious dialogue and rejects violence in God’s name.” [1]

Pope Francis on one hand condemns proselytism (preaching the gospel to nonbelievers) but on the other hand he praises interfaith dialog. These are one in the same as far as Rome is concerned. It is through ecumenism that Rome will bring Protestants and Muslims under her influence and control.

The Pope is trying to bring “peace and unity” to the whole world through ecumenism. This is a subtle, charming proposal meant to seduce everyone by enticing them into her arms. It may sound positive and logical, but the ecumenical forum is an attempt to downplay doctrine, truth and history. Interfaith participants ignore facts and reality and embrace fiction.

They misrepresent Christ and portray Him as a non-doctrinal, non-judgmental, non-threatening spiritual guru who leaves everyone in error. When in reality, the preaching of truth is more important than peace and dialog.

“Preach the word; be instant in season, out of season; reprove, rebuke, exhort with all longsuffering and doctrine.” 2 Timothy 4:2.

This is the mission that Jesus entrusted to His disciples. For centuries God has had faithful missionaries who have obeyed the Lord’s command to proclaim the gospel to the world. But today we have Pope Francis and his ecumenical agents who are attempting to prohibit the mission of Christ from reaching the world.

The holy words of scripture are little appreciated today. Sharing the everlasting gospel with nonbelievers is looked upon by these ecumenical diplomats as a great evil. Pope Francis and his assistants are flying all over the world spreading interfaith unity and cooperation everywhere they go. They are working against God’s holy commandments.

There is a universal attempt to destroy the faith of Jesus, to silence the Three Angels’ Message and to make of none effect our unique distinctive truths. This is all being done by ecumenical diplomats who are working day and night. But we know who is ultimately behind all of this. It is Satan’s plan to keep the world from hearing God’s last message of mercy, and he has been successful in causing many of our people to lose sight of our present duty for this hour.

Jesus did not come to this world to redeem us through His death on the cross so that we could leave people in darkness. This goes against God’s will and refutes the mandate of Christ:

“And he said unto them, Go ye into all the world, and preach the gospel to every creature.” Mark 16:15.

“We are not to make less prominent the special truths that have separated us from the world, and made us what we are; for they are fraught with eternal interests” (Evangelism, p. 121).