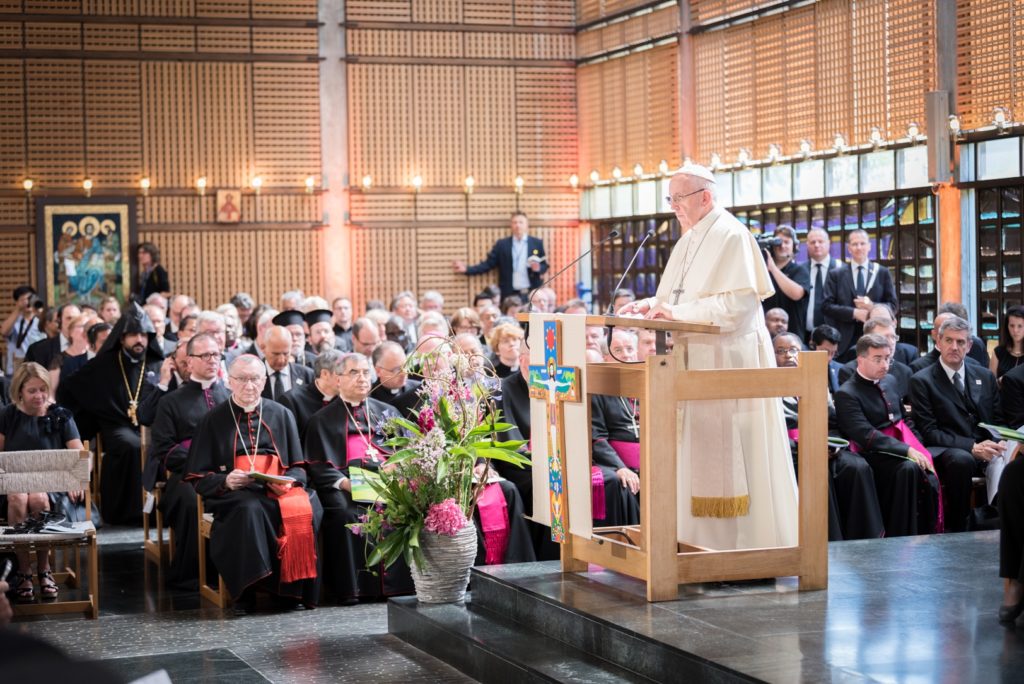 Pope Francis speaks at the world-wide headquarters for the World Council of Churches.

On June 21, 2018, Pope Francis visited the headquarters of the World Council of Churches [WCC] in Geneva, Switzerland during an “ecumenical pilgrimage.” This papal visit was dedicated for the purpose of strengthening ecumenical relationships with other churches and coincided with the WCC’s 70th anniversary. Pope Francis participated in an ecumenical prayer service with religious leaders from around the world. The “theme” of Pope Francis’ visit was called “Ecumenical Pilgrimage – Walking, Praying and Working Together.

The World Council of Churches with its 590 million members is arguable the largest ecumenical fellowship of churches in the world. In his address to the WCC, Pope Francis challenged the Protestant churches to make the work of unity a priority in the service of the church.

Pope Francis said: “We are called, together, to walk along this path. This calls for constant conversion and the renewal of our way of thinking.” [1]

The Pope told the assembly of Protestant churches that in order to achieve unity between the faiths there must be a “renewal” or a change in our thinking. This is exactly what has been happening; but it’s Protestants who are making all the concessions.

“It is not without reason that the claim has been put forth that Catholicism is now almost like Protestantism. There has been a change; but the change is in Protestants, not in Romanists (Spirit of Prophecy, Vol. 4, p. 388).

Pope Francis continued: “In the course of history, divisions between Christians have often arisen because at their root, in the life of communities, a worldly mindset has seeped in. First, self-concern took priority over concern for Christ. Once this happened, the Enemy of God and man had no difficulty in separating us.” [1]

In other words, Pope Francis is telling us that the main reason why Protestants and Catholics are not united is because of selfish disagreements on “self-concerns” and not over matters of doctrinal heresy. According to this kind of reasoning we are all still part of the same body of Christ. Francis is telling Protestants that the disputes which separates them from Rome are not over truth but over politics. And somehow it was the devil who brought division and schism into the church.

The truth is that Protestants broke away from Rome because she had embraced serious theological errors – errors which she still holds today. This is basic, historical Protestant teaching. They left the fellowship of Rome because her doctrines were (and still are) incompatible with the teachings of Scriptures. That’s what the name “protestant” is all about – they were protesting the false theories and teachings of Rome. This was Luther’s view of Protestantism. Sadly, this form of Protestantism is almost non-existent today.

Today, Pope Francis is attempting  to eliminate the historical Protestant faith with all his sweet talk and flattering words of ecumenical unity. Notice how he is trying to take the Christian world back towards the Dark Ages.

Pope Francis continued: “Even now we can walk in the Spirit: we can pray, evangelize and serve together. This is possible and it is pleasing to God! Walking, praying and working together: this is the great path that we are called to follow today. And this path has a clear aim, that of unity. The opposite path, that of division, leads to conflict and breakup. We need but open our history books. The Lord bids us set out ever anew on the path of communion that leads to peace. Our lack of unity is in fact openly contrary to the will of Christ, but is also a scandal to the world and harms the most holy of causes: the preaching of the Gospel to every creature.” [1]

Pope Francis is basically saying that when all the Christian churches unite with Rome then world peace can be achieved, and then we can bring an end to all the hurtful scandals and divisions in our world. Rome is on a relentless campaign to bring all the churches back into her fellowship. Pope Francis is urging the Protestant world to develop closer ties with the Vatican in order to end world conflicts. We are about to see some radical changes take place here in the United States and throughout the world. Once this unity is achieved, the greatest spiritual crisis this world has ever seen will break out upon the earth.

“The Roman Church is far-reaching in her plans and modes of operation. She is employing every device to extend her influence and increase her power in preparation for a fierce and determined conflict to regain control of the world, to re-establish persecution, and to undo all that Protestantism has done. Catholicism is gaining ground upon every side” (Great Controversy, p. 565).

Pressure is mounting in the churches to rejoin Rome; and once accomplished, this will lead to the final sell-out of all our civil and religious liberties. Disturbingly, the media, the religious organizations, the civil-right watch groups, and even the present-day watchmen on the walls of Zion, the Adventist people, have almost largely ignored to even discuss these issues. Why is that? Many are elevating gender equality, LGBT+ equality, climate change, immigration and other liberal causes as the most significant issues facing our church and nation.

Satan has stolen a march while we have been distracted with all these other side issues. Satan has been working behind the scenes to undermine and diminish our values of religious and civil liberties. He’s trying to keep the different segments of society distracted until certain changes come. And yes, changes have come, and more are coming.

“The Protestant world will learn what the purposes of Rome really are, only when it is too late to escape the snare. She is silently growing into power. Her doctrines are exerting their influence in legislative halls, in the churches, and in the hearts of men. She is piling up her lofty and massive structures, in the secret recesses of which her former persecutions will be repeated” (Great Controversy, p. 581).

Unless the world is awakened and shaken up by these powerful depictions of prophecy nothing else can ever hope to wake them up. No ecumenical soft-peddling with Rome, no joint-dialog and no mutual understanding and collaboration. “Come out of her My people,” is God’s only and final solution, “that ye receive not of her plagues” (Revelation 18:4). That is the message of Jesus Christ himself and the only call that can set men free. “Come out!” In order to follow Jesus and in order to be with Him.

The enemies of truth are doing their work. They are fulfilling their prophetic role. The healing of the deadly wound is almost complete as the churches unite with the beast of Bible prophecy. It’s also time for God’s people to fulfill their divinely appointed work. It’s time for God’s people to obey Him, reflect His character and advance His third angel’s message to all the world.