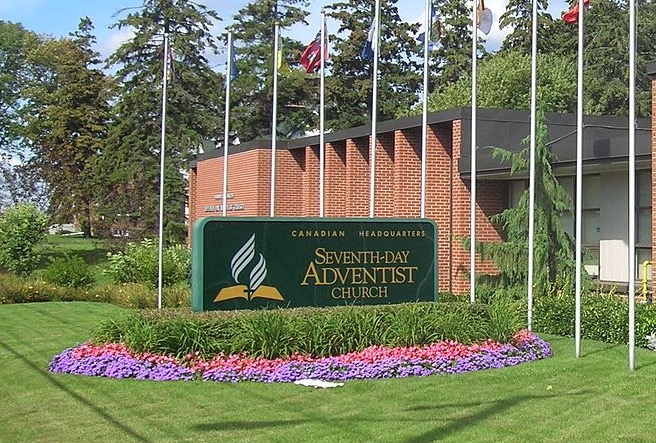 “Ye are the salt of the earth: but if the salt have lost his savour, wherewith shall it be salted? it is thenceforth good for nothing, but to be cast out, and to be trodden under foot of men” Matthew 5:13.

The value of salt is not simply to give your food more flavor. Salt is also a decontaminant and can be used to keep open wounds from becoming infected. Salt is a preservative and can keep certain foods from corrupting and rotting when there is no refrigeration.

If Jesus said we are the salt of the earth, then where are the salt shakers and why aren’t we using them? Where is the church; and more importanly, where is her saltiness today? Where is the strong Christian influence and witness that is to disinfect the corruption and rot that exists in our culture? Sadly, the salt is loosing its flavor.

The Seventh-day Adventist Church in Canada has canceled the featured speakers for its annual camp meeting after receiving heavy pressure from different LGBT+ groups. [1]

The Bible-believing Christian ministry called “Coming Out Ministries” was scheduled to participate at the 2018 Pugwash Camp Meeting in Nova Scotia Canada, an annual weeklong spiritual retreat sponsored by the Seventh-day Adventist Church. But after mounting pressure from gay activists the so-called “controversial” ministry was canceled.

Why is “Coming Out Ministries” considered controversial? What are they doing that is causing LGBT+ activists and others to label them as a anti-gay, bigoted, homophobic hate group? The only crime they have committed is that they believe in the Bible. They are guilty of simply upholding the teachings of the Seventh-Day Adventist Church. They believe that loving relationships should consist of one man and one woman. As former members of the LGBT+ community, “Coming Out Ministries” works to help people overcome same-sex attraction.

This teaching is consistent with the fundamental beliefs of the Seventh-Day Adventist Church. Belief #23 states the following:

“Marriage was divinely established in Eden and affirmed by Jesus to be a lifelong union between a man and a woman in loving companionship.” (Seventh-day Adventists Believe #23) [2]

So has our fundamental belief #23 become too controversial to teach at our camp meetings? What about all the drag queen shows being done in public and gay pride parades and gay fashion shows? Are these not controversial, or are these activities OK? Where is the salt? Where is the church? Where are God’s people who are suppose to be the agents of change for this world’s culture?

Sadly, the salt is being trampled underfoot. When LGBT+ activists can affect change in the list of scheduled speakers for our camp meetings – who is influencing who? They are the ones pressuring us to change. They are indoctrinating our kids, our church and the world with their agenda, and they are the ones directing our culture. The LGBT+ community sponsors all kinds of public events promoting their lifestyle. They are pushing their propaganda on our schools at every level,  and Seventh-day Adventists can’t even schedule their own speakers for their own events on private property without LGBT+ involvement. Unbelievable!

Where are the leaders in the church today who will speak out against the prevailing sins of our day? Where is the salt? If they are too afraid to publicly speak out then why don’t they just allow Coming Out Ministries to address these issues? Why cancel these faithful Seventh-day Adventist Christians from speaking at our camp meetings when the Bible warns vividly and prophetically that the culture of Lot would become the culture of our day (Luke 27:28)?

Sadly, the church doesn’t want to address these issues. We cant handle the bad press. Most of our preachers will never give a warning against the radicals in the LGBT+ movement because they don’t want to create controversy. They don’t want to hurt the success of the church which they define by the number of members and the giving of offerings. If we remain silent we will be accused in the day of judgment of NOT preaching the “entire counsel of God” (Acts 20:27) when we have to stand before Him.

“The ancient men, those to whom God had given great light and who had stood as guardians of the spiritual interests of the people, had betrayed their trust … Thus ‘Peace and safety’ is the cry from men who will never again lift up their voice like a trumpet to show God’s people their transgressions and the house of Jacob their sins. These dumb dogs that would not bark are the ones who feel the just vengeance of an offended God” (Testimonies, Vol. 5, p. 211).

Remember, it was the church of Laodicea (Rev. 3:15, 16) that didn’t want to upset the cultural conformity of its day. However, the early church preached all of God’s counsel and notice what they were accused of:

“These that have turned the world upside down” Acts 17:6.

The early church was accused of trying to change the culture of the entire world! Praise the Lord! They weren’t worried about what others thought about them. They cared more about the honor of God and the salvation of souls.

Oh, if only Seventh-day Adventists could also be accused of trying to change the hearts and minds of lost souls in this present age. If we could only stand up against the floodgate of iniquity sweeping through society. Then the warning message would close with power, Christ would come and we would be taken home to glory. But as long as the church cares more about political correctness and about not offending anyone, we will continue to depart from the faith and compromise our God-given mission.

“The true people of God, who have the spirit of the work of the Lord and the salvation of souls at heart, will ever view sin in its real, sinful character. They will always be on the side of faithful and plain dealing with sins which easily beset the people of God. Especially in the closing work for the church, in the sealing time of the one hundred and forty-four thousand who are to stand without fault before the throne of God, will they feel most deeply the wrongs of God’s professed people” (Testimonies, Vol. 3, p. 266).