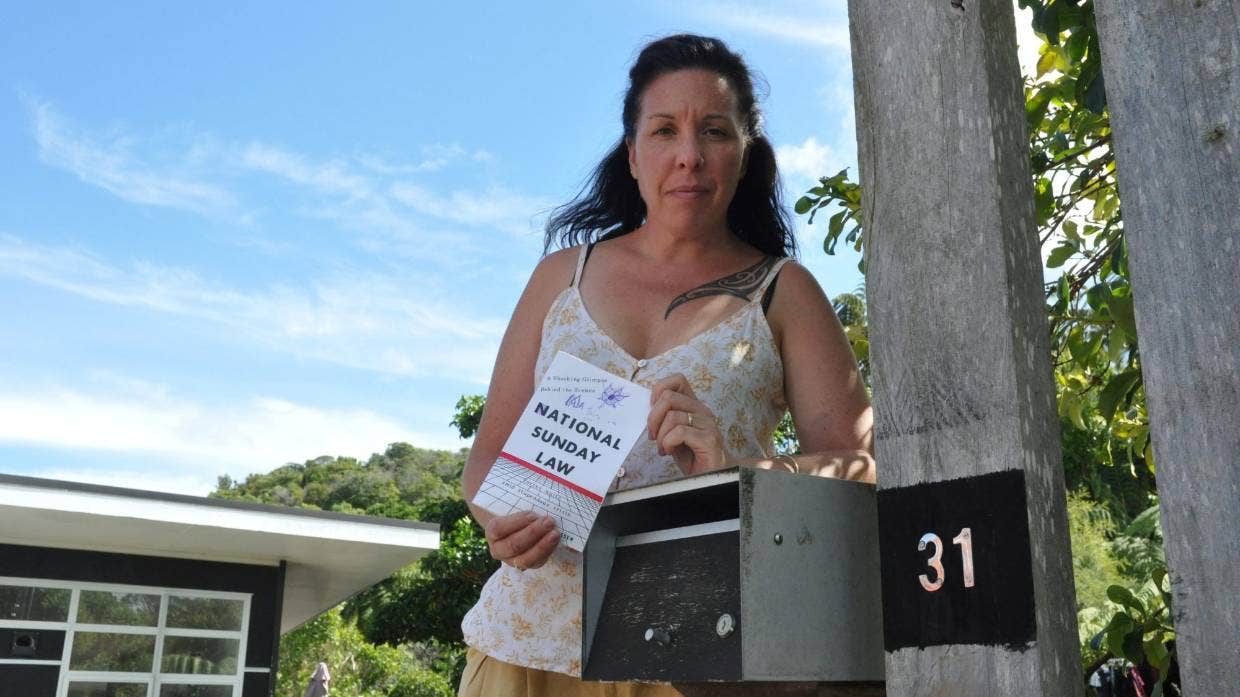 Haley Rivas Herrera, the person who told the media she was burning the stacks of books. [1]

Pastor Jan Marcussen’s book National Sunday Law (NSL) is creating a lot of controversy in New Zealand as Haley Rivas Herrera, the mother of a child who is responsible for delivering newspapers, told the local news that she is going to burn the piles of NSL books they gave her daughter to distribute to her newspaper route. The books were part of a mass mailing campaign in Wellington, Lower Hutt and surrounding areas to share the Three Angels’ Messages with the community.

This news was reported on March 9, 2021 by Stuff, New Zealand’s most popular news website which has around 2 million monthly readers. [1] The report quoted Haley Rivas Herrera, who said she was “horrified” and “disgusted” with the National Sunday Law book and called it “extreme and insidious propaganda, extreme religious rhetoric” and a “conspiracy theory.” 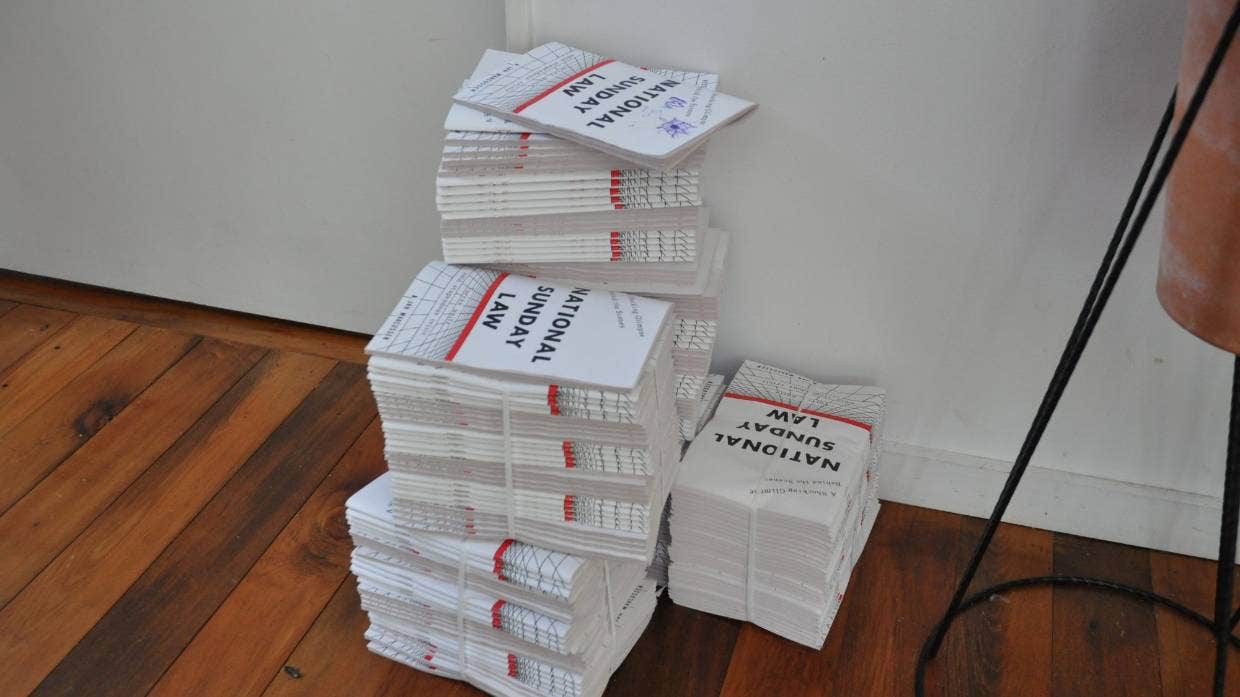 The stacks of National Sunday Law books that are headed to the “wood burner.” [1] 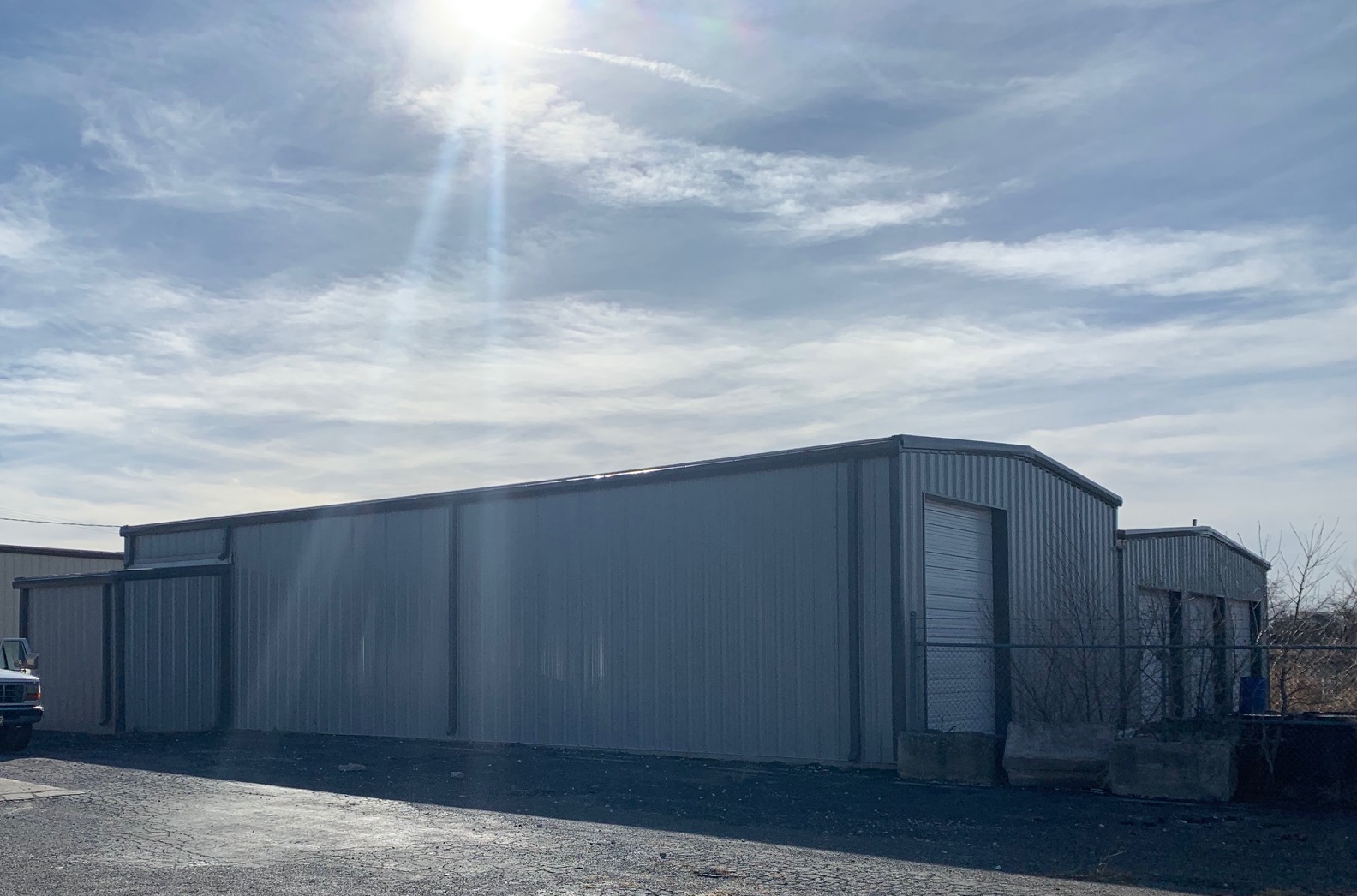 The warehouse in the USA where 824,000 National Sunday Law books are stored for distribution.

That would in fact be illegal because those books do not belong to her. When you pay to get your literature distributed by a company, the delivery person’s mother doesn’t have a right to destroy those materials. They may have a right to refuse, but the materials need to be returned, and the customer needs to be reimbursed for all distribution services that were not rendered. But when do we, in a free society, choose to burn books we don’t agree with; books that are the property of other people?

Why doesn’t the news media see a major problem with this kind of extreme, radical censorship and destruction of private property? We hope that the Seventh-day Adventist Ministry who sponsored this project gets reimbursed for their books and distribution fees. No person should be able to force a distribution company to breach a contractual obligation.

It appears that the media contacted the Seventh-day Adventist Church about this news. Notice how the church responded to the controversy over the National Sunday Law books:

“Seventh-Day Adventist Church in New Zealand North Island lead pastor Bob Larsen said the book was not endorsed by the church. The [church] had no involvement in the publication or distribution of the book … The church does not endorse or recommend this book.” [1]

Where is the spirit of religious liberty? Where are the religious liberty leaders? This is an affront to both civil and religious freedoms. The National Sunday Law books exalt Saturday, the 7th day, as God’s true Sabbath, and warns against any attempt to enforce Sunday as the day of worship by law. What’s wrong with this message? Why can’t the church defend our historic message when under attack, just as it does when speaking up for critical racial theories, climate change, gender inclusion and other liberal causes? 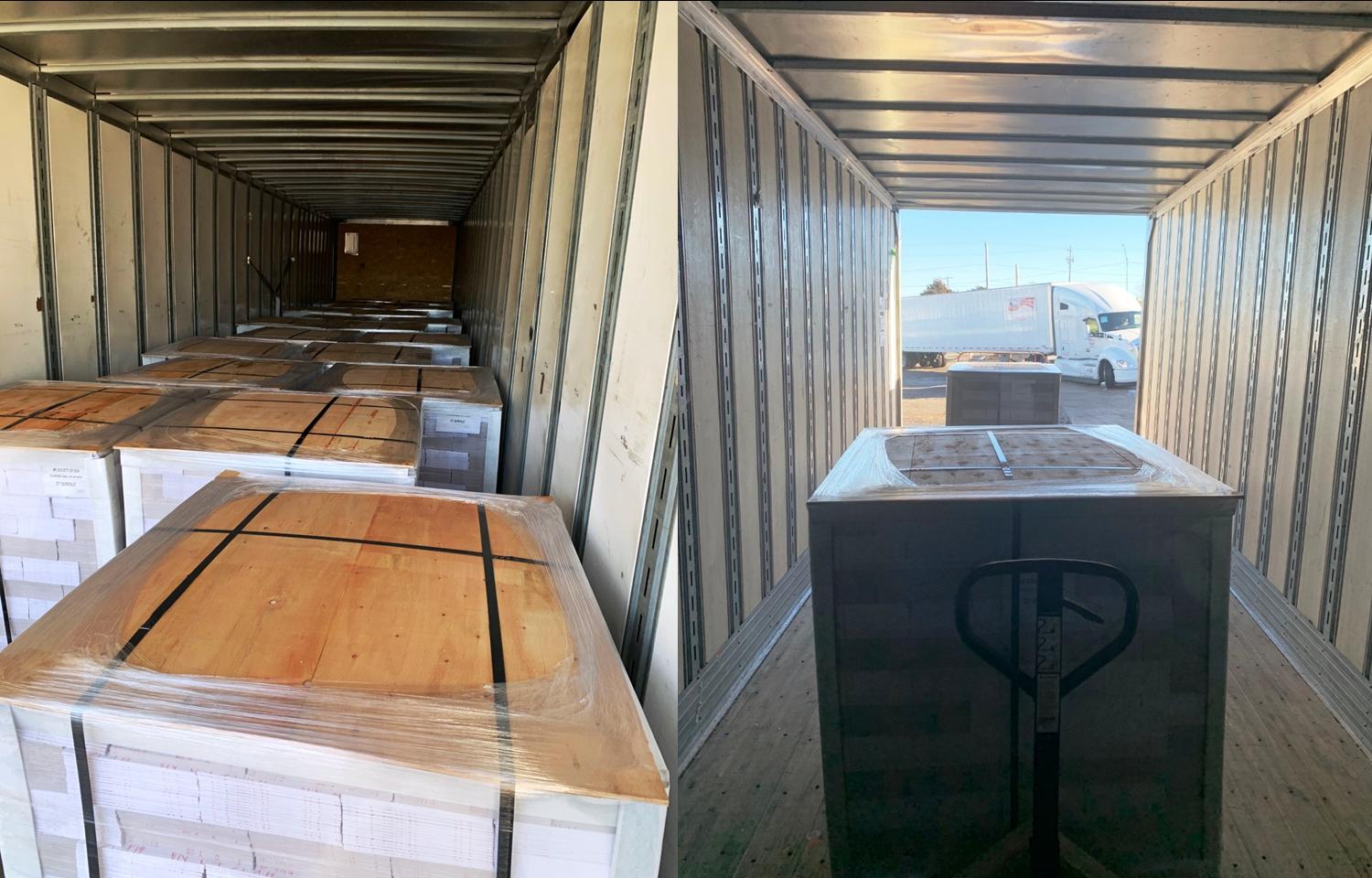 The National Sunday Law books are delivered in semi-trucks. Three at a time. Each pallet contains 8,000 books.

Why are Adventists silent and why would a newspaper distribution company risk the possibility of legal action for not fulfilling its contractual obligations and allow National Sunday Law books to be burned? It is because nobody wants to feel the wrath of Rome:

“And they worshipped the beast, saying, Who is like unto the beast? who is able to make war with him” Revelation 13:4. 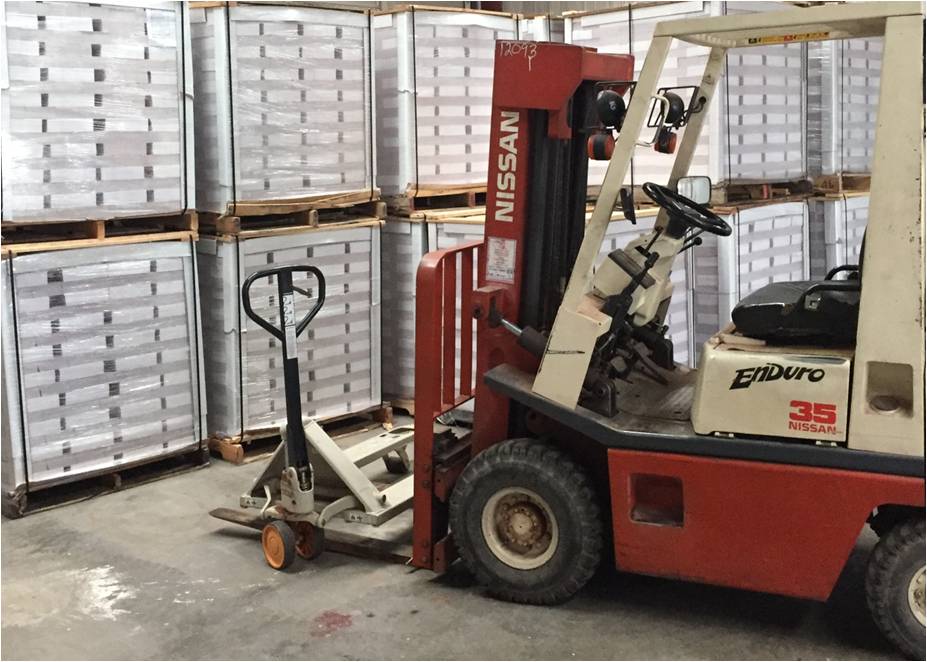 The National Sunday Law books are stored in a warehouse until they are ready for distribution.

We are witnessing the cancel culture and the denial of free speech and freedom to practice one’s faith. Evangelism is part of who we are as Seventh-day Adventists, and the freedom to speak and practice our faith is an inherent human right. Will the General Conference of Seventh-day Adventists send Ganoune Diop to defend our human rights to share the Three Angels’ Message? Don’t count on it. He’s too busy defending everyone else except our faithful believers. The local church has already disavowed the books. They claim that they do not “endorse or recommend the books.” Basically the church in New Zealand is saying that they don’t recommend the Three Angels’ Messages or the Seventh-day Sabbath to anyone.

It is amazing the lengths that our church will go to, to speak out for so many other causes, but when faithful, genuine, mission-minded Seventh-day Adventists are silenced and when their truth-filled literature is confiscated and burned, and when this news is paraded across the country of New Zealand for the world to see, the church is nowhere to be found. 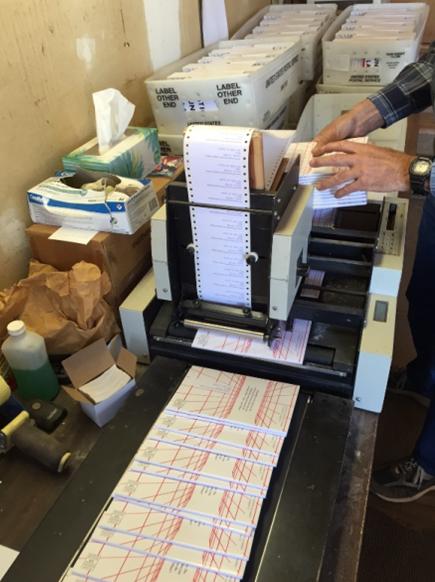 Every book needs to get its own address label.

Are we bowing down to Rome? Is that what it is? The National Sunday Law book places a strong emphasis on the Three Angels’ Messages and the Sabbath of the Decalogue. Pastor Jan Marcussen, in his book reveals the close relationship between obedience to God and faith in Jesus Christ. This close relationship between obedience and faith is the central theme of the Third Angel’s Message.

Is this what the church is ashamed of? If it is true that Pastor Jan Marcussen’s book is a lie and a conspiracy theory, then the Seventh-day Sabbath (Saturday) being the true Lord’s day is also a lie and a conspiracy theory. If Pastor Jan Marcussen’s book is not part of the fundamental beliefs embraced by Seventh-day Adventists world-wide, then why don’t they just give the evidence. Why don’t they PROVE that the message in the book is wrong? They can’t! 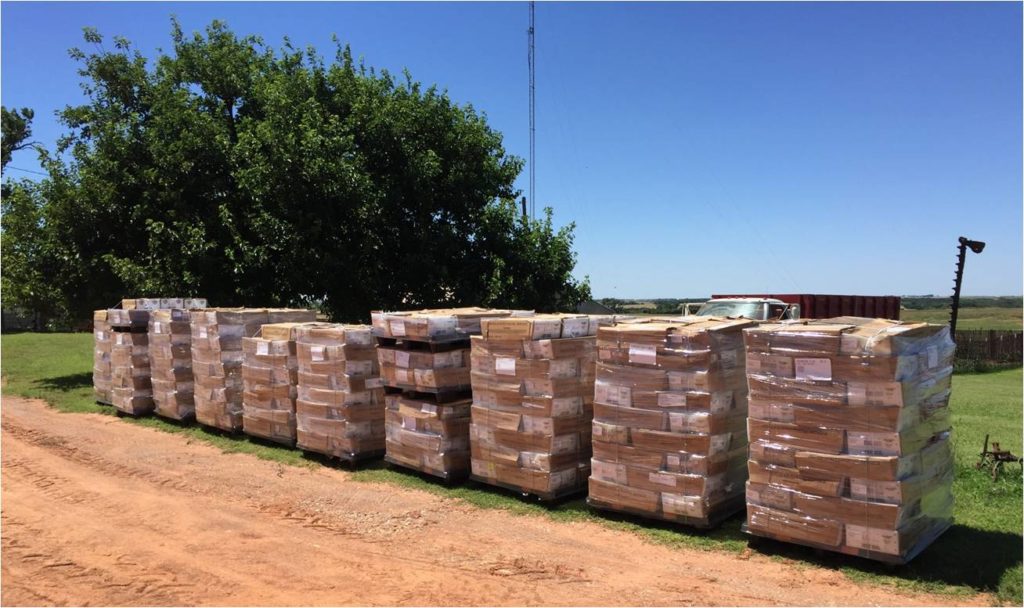 90,000 NSL books processed and ready to be mailed.

So when the church today says it cannot endorse or recommend the National Sunday Law book, as these books are being publicly excoriated by the media, they are bowing in appeasement to Rome! It was God Himself who gave us the different depictions of beasts and horns in the book of Revelation, not Jan Marcussen. God placed them there to be interpreted, and unless the world is awakened and shaken by these powerful depictions of prophecy, nothing else can ever hope to awaken them. Ecumenical soft-peddling with the beast and its image will not wake anyone up, and taking a gentler, non-threatening approach against Satan will not bring success to our efforts. 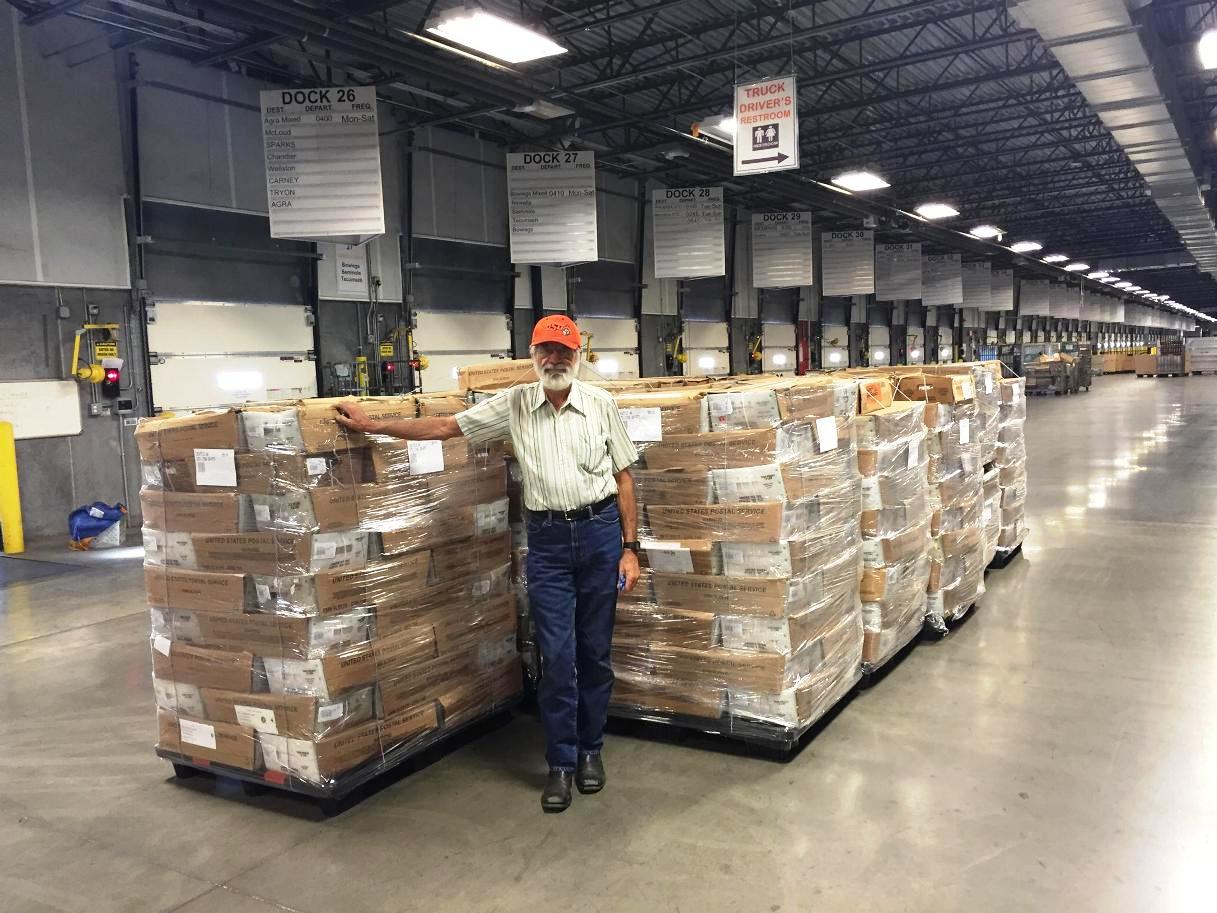 Brother Rodney is at the distribution center where the NSL books are mailed to homes throughout the United States.

“Come out of her My people,” is God’s only and final solution, “that ye receive not of her plagues” (Revelation 18:4). That is the message of Jesus Christ. This is the call that will set men and women free. “Come out,” in order to follow Jesus. It is the devil himself who is afraid of this message. It is the devil who is desperate and nervous because he cannot allow this message to get out because he will lose the souls he has in darkness.

“When the religion of Christ is most held in contempt, when His law is most despised, then should our zeal be the warmest and our courage and firmness the most unflinching. To stand in defense of truth and righteousness when the majority forsake us, to fight the battles of the Lord when champions are few—this will be our test. At this time we must gather warmth from the coldness of others, courage from their cowardice, and loyalty from their treason.” (Testimonies, vol. 5, p. 136). 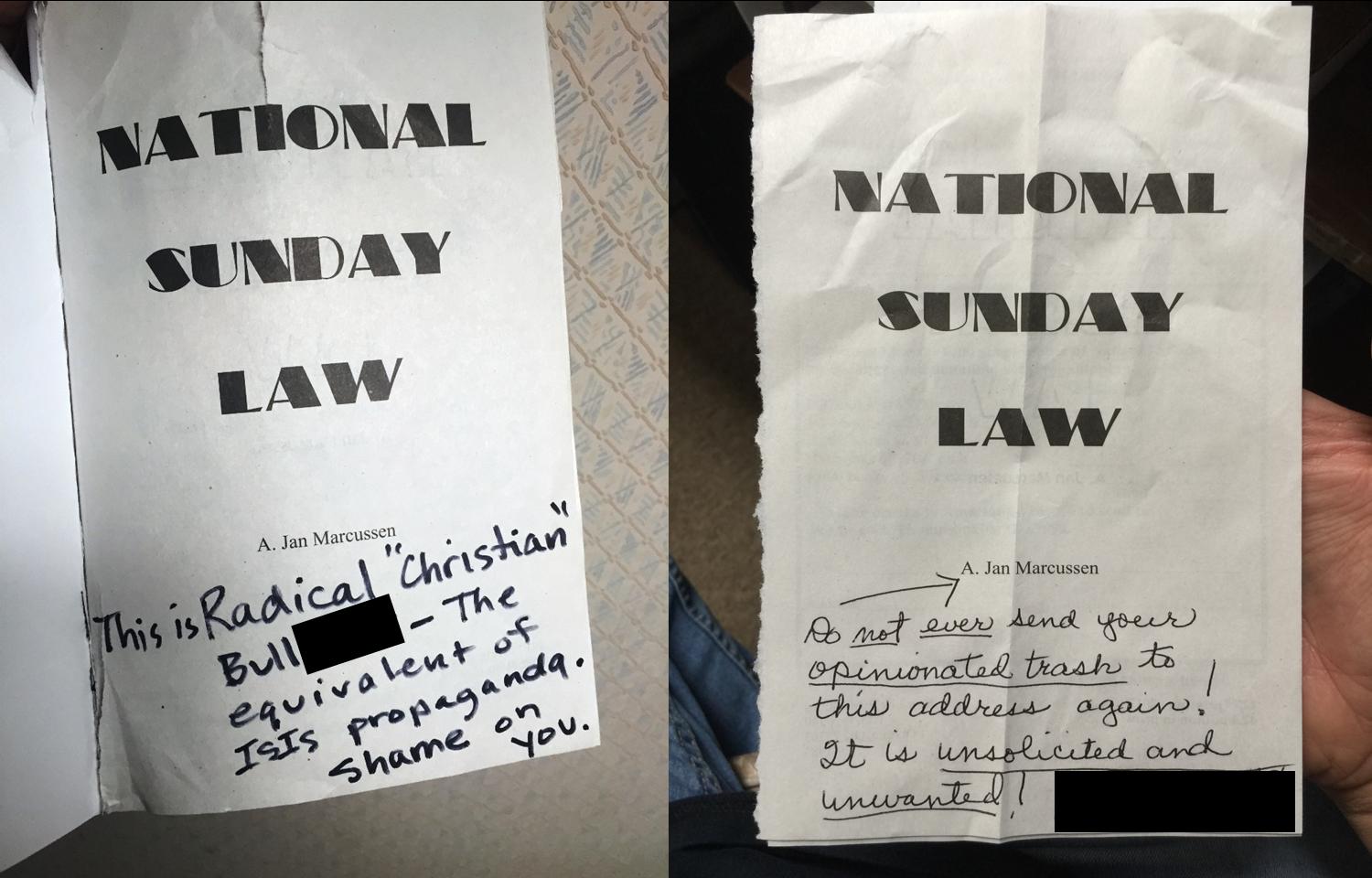 The National Sunday Law book is just a condensed version of the Great Controversy. The overwhelming response has been very positive. But not everyone appreciates the final warning message.

We are in the time when all the prophecies are reaching the final consummation. We are seeing before our eyes the final development of the Great Apostasy that the Bible warned about. For the glory of God, these National Sunday Law books that were not delivered, will certainly not be the last ones that are coming. The books that were confiscated is just a small part of more books that will be in circulation soon. For those who think that these were the last books, they are in for a big surprise. Regardless of all the people who tried so hard in so many ways, by using so many different methods to stop the message and to prevent it from coming out — by the grace of God more truth-filled literature is being sent out even as we speak.

The faithful Remnant will be the most persecuted, the most oppressed and the most evil spoken of— and yet they will also be the most privileged people of earth’s history. Jesus is coming soon, and that is our Joy! The small, persecuted, company of faithful Seventh-day Adventist believers will have the joy and peace that comes from fulfilling God’s will. And that joy increases as the days go by. That joy gives us more strength when the conflicts and opposition increase. God’s people must grow stronger, and He will impart more grace and joy when trouble begins. This is the confidence and the encouragement that God wants His people to develop.

We want to encourage each of you to contact Pastor Jan Marcussen’s office and help to get the Three Angels’ Messages out into the homes of people before it is too late. You can call and talk to Sister Marie, one of the sweetest persons you will ever meet 618-627-2357. Unfortunately, they are being condemned, maligned, harassed, discredited and disavowed by both the world and the church because the work they are doing strikes terror to the kingdom of the beast of Revelation 13. And contrary to popular sentiments, they are some of the kindest, most loving and dedicated people you will ever know.

For the glory of God, they have published 48.1 million National Sunday Law books to date in 74 different languages and soon to be 76 as two more languages are just about to be completed. Now you know why the devil is angry. But praise the Lord we can count on His promise:

“When the enemy shall come in like a flood, the Spirit of the LORD shall lift up a standard against him.” Isaiah 59:19.