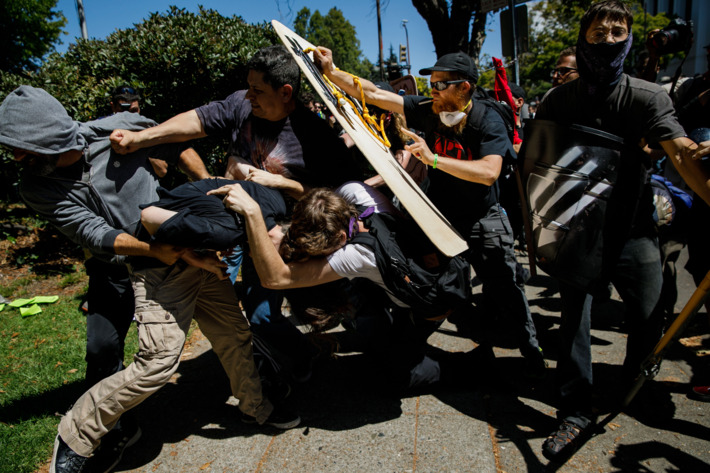 Political intimidation and threats of violence against political opponents is destroying civility in our nation. A new civil conflict not seen in our time is coming to America and it is tearing our nation apart. A couple of days ago, a sitting member of Congress called on Americans to attact their political rivals.

“If you see anybody from that [Trump’s] Cabinet in a restaurant, in a department store, at a gasoline station, you get out and you create a crowd and you push back on them, and you tell them they’re not welcome anymore, anywhere,” Rep. Maxine Waters told a crowd of supporters over the weekend. “If you think we are rallying now you ain’t seen nothing yet,” she said. [Source]

Sadly, it has begun. Political leaders are being harassed, threatened and heckled by mobs of protesters in restaurants, movie theaters and on the streets. We haven’t seen these kinds of threats in modern times against Americans by opposing political parties. The rising tide of political anger and frustration is part of Bible prophecy. And what is the cause? The Bible gives us the answer:

An age of iniquity, sin and lawlessness is the problem dividing America. This godless spirit of antagonism against the law includes a hatred against both civil and Divine law.

“Anarchy is seeking to sweep away all law, not only divine, but human. The centralizing of wealth and power; the vast combinations for the enriching of the few at the expense of the many; the combinations of the poorer classes for the defense of their interests and claims…the world-wide dissemination of the same teachings that led to the French Revolution—all are tending to involve the whole world in a struggle similar to that which convulsed France” (Maranatha 146).

We have never been closer to another “civil war” in this country than we are right now. The conflict is over fundamentally different ideologies. It started a couple of years ago with massive protests, but now we are hearing calls and threats of violence. Soon there will be widespread fights, looting, fires and killings nationwide. The Bible reminds us that the loss of civility comes as a result of the rejection of God’s moral law:

“Those who teach the people to regard lightly the commandments of God sow disobedience to reap disobedience. Let the restraint imposed by the divine law be wholly cast aside, and human laws would soon be disregarded. Because God forbids dishonest practices, coveting, lying, and defrauding, men are ready to trample upon His statutes as a hindrance to their worldly prosperity; but the results of banishing these precepts would be such as they do not anticipate” (Great Controversy, 585).

God’s Ten Commandment moral law is an immutable standard designed to restrain men and women from indulging in violence, debauchery, immorality and other destructive conduct. This moral code is being rejected while sin is being promoted by politicians. The cause for all the broken homes and all the civil unrest is due to the fact that we no longer believe in God’s standard of truth and morality. We believe that truth is relative and there is no right and wrong.

This moral decay is predicted in prophecy and is at the heart of the messages found in the Three Angels of Revelation 14:6-12. This truth must be given with a loud voice at this very time to all the world. If this message doesn’t penetrate the hearts and minds of our citizens then war and anarchy, the likes we have never seen before, will soon flood the streets of our nation and of the world.

“The angel of mercy is about to take her flight, never to return. The people of God will then be plunged into those scenes of affliction and distress which prophets have described as the time of Jacob’s trouble” (Maranatha, p. 199).