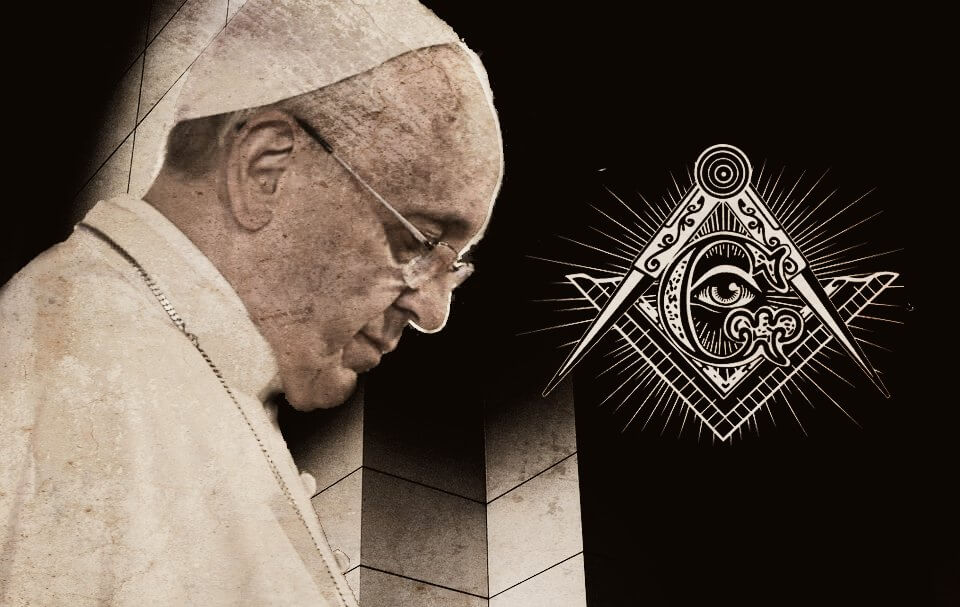 The Masonic Order has just revealed how close Pope Francis’ most recent encyclical is to the ideals of Freemasonry. These words were expressed in a report that was published by the Grand Lodge of Free Masonry in Spain, as they openly support Pope Francis’ call for a universal brotherhood. [1] The Pope’s latest encyclical called Fratelli Tutti calls on political and religious leaders to create a new universal brotherhood to help overcome our differences. [2] And the Masons are celebrating the new document.

The above tweet published by the Masonic Order in Spain says: “Fratelli Tutti is the last encyclical of @Pontifex_es in which it embraces the Universal Fraternity, the great principle of #Modern Masonry.”

Freemasonry is saying publicly that they are in favor of the latest papal encyclical. What does this tell you? It tells us that Pope Francis is promoting Masonic teachings. The Pope’s ecumenical teachings on brotherhood are based on Masonic principles, and it should come as no surprise that Freemasons are in love with it.

The Masons are working with their Master Mason, the Jesuit Pope Francis, to achieve their goal. The plan is to delegitimize the Christian faith and show that God’s revealed truth found in the Bible is not necessary. The Pope speaks of a common destiny and of the need for us to be equal in our diversity. This does not lead us to a fellowship (fraternity) with Christ, but to the kingdom of the Antichrist.

“Cut yourself loose from the Free Mason lodge, and all that relates to the society. It was not safe for you to have any part with this secret order. Those who stand under the blood-stained banner of Prince Emmanuel cannot be united with the Free Masons or with any secret organization. The seal of the living God will not be placed upon any one who maintains such a connection after the light of truth has shone upon his pathway.” (Letter 21, 1893).

Why would Seventh-day Adventists join the Chief Master Mason, Pope Francis? Why would we participate in the Masonic ecumenical movement with Rome? There is no justification Adventists can give for being a part of this. For years top Seventh-day Adventist Church leaders have been engaged with the modern ecumenical movement, and every day it is becoming more evident that Rome’s interfaith unity movement is promoting diabolical Masonic heresies. And those who continue to participate, promote or justify these engagements will NEVER receive the seal of God.

The ecumenism of St. Francis of Assisi was the inspiration for Pope Francis’ encyclical on the universal brotherhood (Fratelli Tutti). All of this is part of the Masonic plan to establish a great temple of universal brotherhood that goes beyond doctrine, beliefs and sacred writings. This is the “unity in diversity” promoted by the Luciferian, Masonic New World Order.