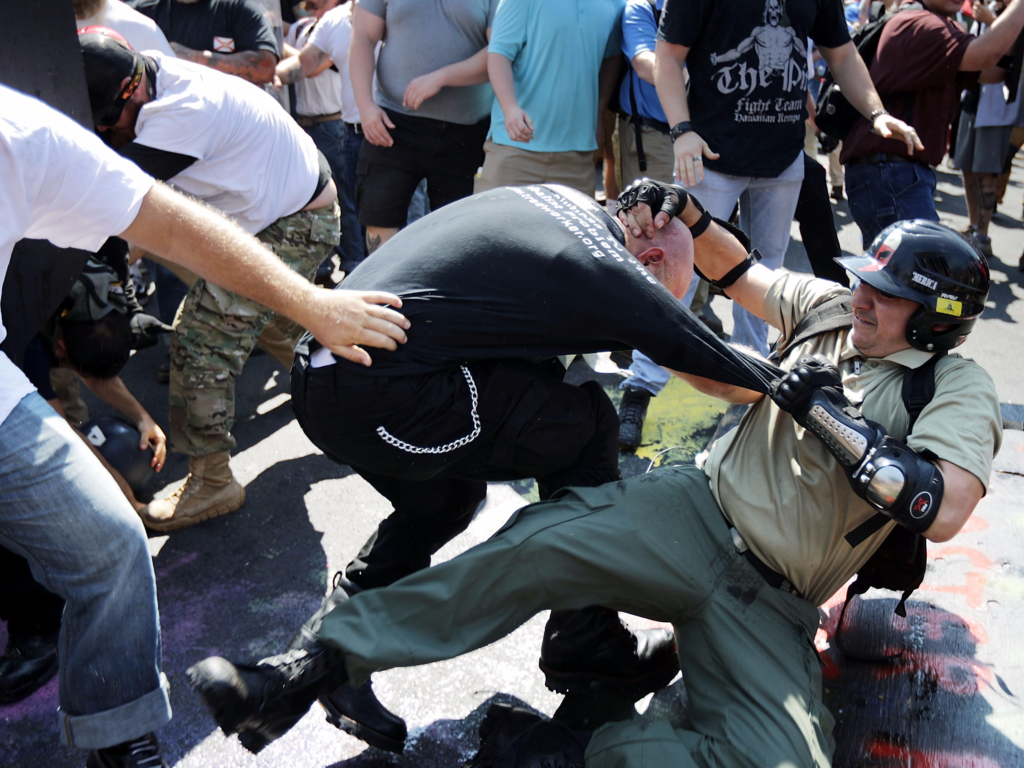 “Every kingdom divided against itself is brought to desolation.” Matthew 12:25.

Divisions will cause any nation to come to its end. This is where all the fighting, the riots and protests that we see daily in the heartland of America is taking us to. The mob mentality is only getting worse as protesters turn into violent revolutionaries. Yesterday during President Trump’s visit to Phoenix protesters actually attacked police with rocks and tear gas which they had brought with them to the protest.

The hatred level is escalating as the anarchists and rioters bring violence and mayhem to our cities. Citizens are being attacked and assaulted, windows are being smashed, trash cans are being lit on fire and cars are being vandalized. Everything is out of control. These demonstrations that are taking place in America are attracting world-wide attention as our growing divide is being magnified through social media and by the 24/7 news cycle.

Our allies around the world watch with horror as they see a deeply divided America struggling to maintain civility and order. Our enemies mock and laugh at our nation as we wrestle with internal political and social divisions. Nations like North Korea and Iran see our contentious political climate as a vulnerability and a sign of weakness. How can we stand before our enemies on the outside when we are so divided here? The growing strife in America only emboldens dictators to resist democracy and to hold on to their power.

But our greatest threat is not coming from our outside enemies. Our biggest problem is from within, not without. We have external enemies that wish us harm, but the greatest harm that will bring our nation to desolation is coming from the internal division and infighting that is sweeping our country.

“And the brother shall deliver up the brother to death, and the father the child: and the children shall rise up against their parents, and cause them to be put to death.” Matthew 10:21.

The Bible predicts that a period of rebellion and lawlessness would exist in the last days. Is another Civil War coming like the one our nation went through in the 1860s? Oh no, something much more worse is coming. Our nation endured that crisis and the unity was preserved. What we see coming is an attempt to bring a lawless revolution based on tyranny and anarchy that will bring a complete desolation to our nation. Sinister forces want to bring to waste and ruin our great nation and its principles of freedom, the rule of law and our Judeo-Christian heritage.

Do we realize how much worse it is going to be this time around if these problems are not solved?

“Woe to the inhabiters of the earth and of the sea! for the devil is come down unto you, having great wrath, because he knoweth that he hath but a short time.” Revelation 12:12.

As we get closer to the end Satan’s wrath will be unleashed because he is the chief architect that is stirring this red-hot rage, anger and division. Satan is filled with wrath because his end is coming and he’s filling the minds of men and women with wrath and this is evident when we see the division in America and the resistance, the fighting, the riots, the hate and all the violence.

He is mesmerizing and deceiving the people and bringing a great curse upon the land and if we don’t wake up and come together as one nation things are not going to get better and we won’t survive. Crisis after crisis, tragedy after tragedy and riots after riots will only continue if we don’t learn the lesson.

God is the one Who is emphasizing this very truth. He identifies the root of our problem and in great love and mercy He offers to us the only solution to prevent the complete and final desolation of America. No political scientist, no seasoned politician and no constitutional scholar could lay out with such accuracy the very root of our problem and offer real solutions. Now, hear the word of the Lord:

“Ah sinful nation, a people laden with iniquity, a seed of evildoers, children that are corrupters: they have forsaken the LORD, they have provoked the Holy One of Israel unto anger, they are gone away backward. Why should ye be stricken any more? ye will revolt more and more: the whole head is sick, and the whole heart faint. From the sole of the foot even unto the head there is no soundness in it; but wounds, and bruises, and putrifying sores: they have not been closed, neither bound up, neither mollified with ointment. Your country is desolate, your cities areburned with fire: your land, strangers devour it in your presence, and it is desolate, as overthrown by strangers.” Isaiah 1:4-7.

Our only hope and salvation for our people and nation is to do the following:

“Wash you, make you clean; put away the evil of your doings from before mine eyes; cease to do evil; Learn to do well; seek judgment, relieve the oppressed, judge the fatherless, plead for the widow. Come now, and let us reason together, saith the LORD: though your sins be as scarlet, they shall be as white as snow; though they be red like crimson, they shall be as wool. If ye be willing and obedient, ye shall eat the good of the land: But if ye refuse and rebel, ye shall be devoured with the sword: for the mouth of the LORD hath spoken it.” Isaiah 1:16-20.