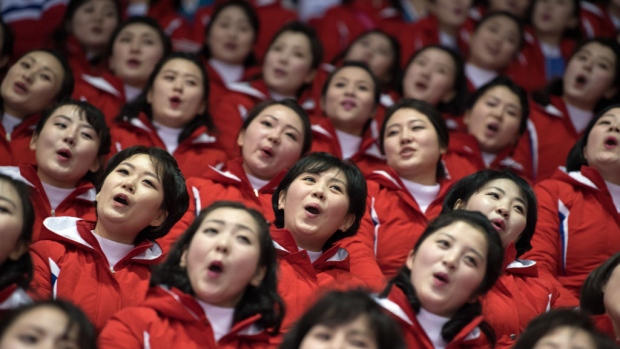 Even though North Korea hasn’t won any metals this year at the 2018 Pyeongchang Winter Olympics Games in South Korea, they are coming out from these games as the true champions. The North Korean’s charm and propaganda has hijacked the games and festivities as they are being embraced by the world. North Korea is competing under a unified Korean flag with South Korea, and athletes from both Koreas are playing on the same hockey team. For the first time in history a North Korean delegation from the ruling Kim family traveled to South Korea to attended the games and to meet with their southern neighbors.

North Korea also sent its own cheering squad called the “army of beauties.” These hand-picked, loyalists are being praised by the media as they have mesmerized the games with their synchronized cheerleading. North Korea has been generating significant media attention from around the world and this is giving the isolated North Korean nation the recognition and legitimacy it has been seeking. So basically it is as though North Korea is co-sponsoring the Olympics games.

While the world’s attention is focused on the games, the athletes, the metal count and on Kim-Jong Un’s army of beauties – the question no one is asking is ‘What about all the millions of North Koreans who are being oppressed and starved right now?’ How can we sit and smile and watch the games with the leaders of the most oppressive regime on the face of the planet while the majority of North Koreans are suffering? How can we cheer and celebrate in unison with a nation that has absolutely no concern for human rights or human life?

“Oh,” some may say, “leave politics out of sport.” Really? How can you forget about political dissenters who have been condemned for life to live in work camps? How can we forget about the Christians who are tortured, starved and enslaved? God doesn’t forget about them. Denying people the most basic human rights is business as usual for the brutal, one-party North Korean dictatorship.

The Olympic Games are being used to legitimize and normalize a totalitarian dictator that daily violates the rights of its citizens. Sorry, but this is a shameful hypocrisy on the part of the International Olympic Committee. The games are supposed to bring out the best of humanity – peaceful coexistence and the preservation of human dignity and life – and not to give an international platform for tyrannical regimes that allows no free speech, no rule of law, no religious freedom and no free elections to its citizens. Sadly, God’s plan for human government is being eroded. This is another sign that our world is rejecting His word.

“Or unto governors, as unto them that are sent by him for the punishment of evildoers, and for the praise of them that do well.” 1 Peter 2:14.