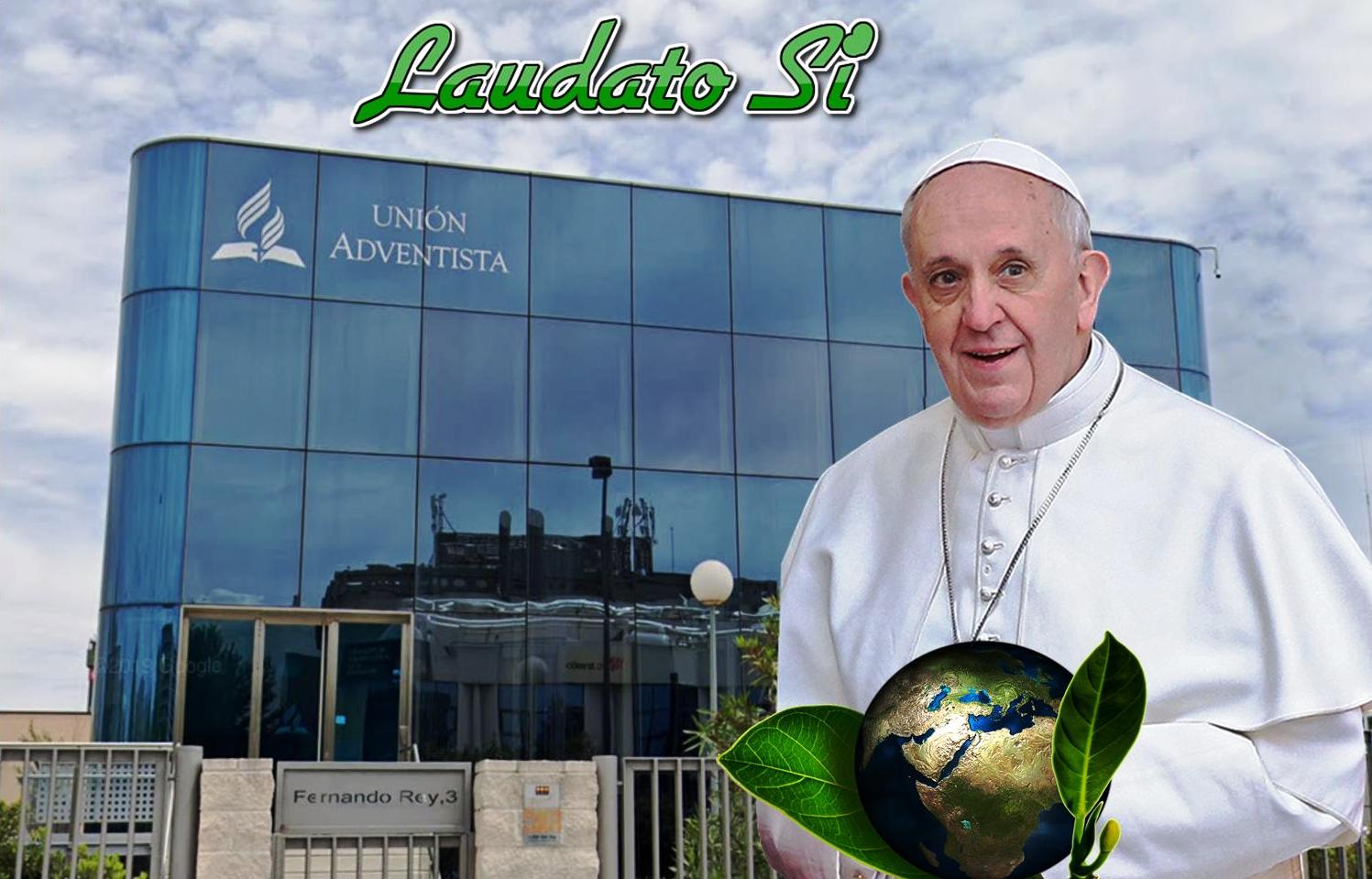 The Spanish Union of Churches Conference is the headquarters of the Seventh-day Adventist Church in Spain. Its official news magazine is called Revista Adventsita España. Esther Azón, co-editor of Revista Adventista España, recently wrote a short article and provided a link to a 102-page report revealing that Seventh-day Adventist institutions within her union have been participating in government sponsored, ecumenical, climate change initiatives. These initiatives are promoting and implementing the policies of Pope Francis contained in his encyclical Laudato Si ‘.

The name of the government-sponsored climate change initiative is called the “Interreligious Guide to Good Practices in Climate Culture.” It promotes ecumenism, environmentalism, spiritualism, pantheism, Eucharistic celebrations and even calls for a “Sabbath for the Planet.” The Seventh-day Adventist Union Conference in Spain has made this pro-Laudato Si’ guide on climate change (102 pages) available to all Seventh-day Adventists through its official news website. [1]

Seventh-day Adventist institutions are IN THIS REPORT along with all the different religions, including Catholics and Jesuits. We will first highlight the Pope’s encyclical on climate change and then look at the role of Seventh-day Adventists. Remember, both this climate change initiative and the corresponding report are funded and published by the Division of Religious Affairs of the government’s Department of Justice.

Page 11: “In 2015, the United Nations set the 2030 SDGs (Sustainable Development Goals) and published the encyclical Laudato si ’ by Pope Francis, a call to all humanity, but especially to Catholics, to comprehensive ecological conversion, which points to the social and environmental challenges to be addressed, are closely linked and are fundamentally moral and ethical in nature.”

Page 23: “They also define the steps to follow to create a Parish Sustainability and Ecology Plan. Finally, highlighted are the three opportunities (pastoral, theological and spiritual) that arise from the involvement of the Church in the ecological question, and of the personal attitudes that can be acquired to be exemplary and to encourage the ecological conversion that Pope Francis calls for in the encyclical Laudato si ’.”

Page 27: The good practice was to create a think tank around the Pope Francis’ encyclical Laudato Si’, specifically, analyzing the contribution that Christian wisdom can make to the challenge of global socio-environmental crisis.

Page 39: The Time of Creation is an ecumenical initiative initiated by the Orthodox patriarch Bartholomew I with the support of Pope Francis to take care of Creation in a special way and restore the wounded relations between people the Earth. These are the weeks that take place between September 1 and October 4, the feast of St. Francis of Assisi.

Page 72: Christianity and Justice promotes the dissemination of Pope Francis ’encyclical Laudato Si’ and the commitment is derived in collaboration with the Network of Integral Ecology Entities promoted by Justice and Peace.

Page 99: Sabbath for our Planet – Religious denominations and entities to carry it out: Catholic, Orthodox and Protestant Christians … A hundred Christians of different denominations called for “the courage to celebrate a Sabbath for our planet” at an event held in the parish of Our Lady of Bethlehem in Barcelona. They are Catholic, Orthodox and Protestant Christians and are committed to making a Jubilee for the Earth a reality … In this ecumenical celebration, those present expressed rejection of a lifestyle that “pushes the planet beyond its limits” and does not respect “the Sabbath for the Earth” … During the celebration it was recalled that the climate crisis and the social crisis must be addressed jointly, in line with what Pope Francis defends in his pontificate.”

The Ecumenical Climate Report Promotes the Eucharist and Pantheism

Page 39: The Eucharistic Adoration for Creation has been celebrated. Fragments of Laudato Si’ (LS) in which reference is made to the universal and cosmic meaning of the Eucharist. One of these he says: “The Eucharist is also a source of light and motivation for our concerns for the environment, and guides us to be custodians of all created things.” (LS, 236).

Page 40: The Closing of the Time of Creation 2020 was carried out with the celebration of the feast in honor of St. Francis of Assisi. The rector of the parish mentioned in all masses that day was the end of the Time of Creation. He played music and sang for the first time the prayer for Creation, which is in the Laudato Si’ (“Our Father, you are present in everything in the universe and in the smallest of your creatures … ”) and also at the end of all Masses, copies of the encyclical Laudato Si’ were sold and leaflets from the group distributing Laudato Si’s reflections invited the people to participate in Tuesday’s training session on October 6 on the encyclical (Laudato Si’).

It goes on to list the areas that the Seventh-day Adventist Church has committed to doing to fulfill its part in Climate Culture: 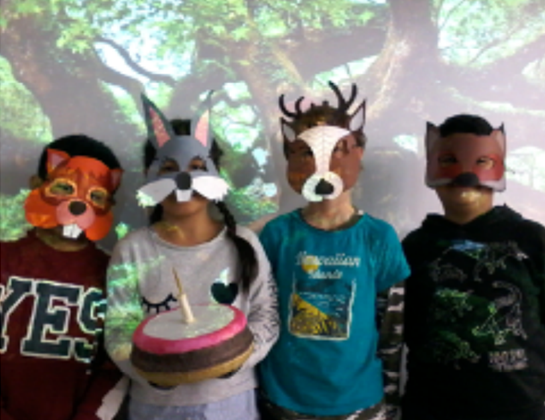 Seventh-day Adventist children dressed up as wild animals in nature to draw attention to the importance of protecting the earth (page 10).

The report also has pages 8 to 10 dedicated to the Urgell Seventh-day Adventist Academy. It describes this Adventist institution as a school that “has always incorporated respect for the environment as the fundamental axis of its ideology.” The report states that students are taught the “values ​​of sustainability and respect for nature as God’s creation.” The Government report also reveals that the Adventist academy enjoys the “maximum” level of being “environmentally friendly.”

The Adventist academy gets praised for:

We are being robbed of our faith! Rome is taking our churches, our schools and our children. In Spain and elsewhere, we no longer have unions, conferences or churches anymore. Thanks to Rome they are being transformed into NGOs (United Nations Non-Governmental Organizations). We are witnessing the total subjugation of a Seventh-day Adventist Union Conference to the ecological ideology of Rome that is anti-Adventist at its core. The Alpha of Apostasy has returned with a vengeance. The Omega is unfolding before our eyes as Seventh-day Adventist entities, one by one, are being stripped of their historic Adventist faith.

In this report, Seventh-day Adventists appear on pages 70, 71 and the Society of Jesus (the Jesuits) appear on page 72, side by side. How convenient. Is this just a coincidence? And to make matters worse, the Union Conference in Spain is sharing this entire climate report on church owned platforms so that other Seventh-day Adventist churches can get inspired and get involved! They present this report as a good thing.

We are seeing the papacy promoting a “Sabbath for the planet” for both the state and the churches. What Sabbath are they talking about? Well, what day does Pope Francis call “Sabbath” in Laudato Si’? Sunday worship! How can Seventh-day Adventists participate in an “Interreligious Guide to Good Practices in Climate Culture” that is bought and paid for by the state? This is church and state coming together to advance Sunday sacredness.

Are we not shocked to see how the leadership has become totally subservient to Rome’s climate agenda? Are we not shocked to see a Union Conference announcing the need for ecological conversion alongside those calling for a “Sunday-Sabbath for the planet?” Is it a small thing to see Adventists listed alongside Jesuits in a document that is replete with calls to embrace Laudato Si’? Read Ezekiel 8:16, 17.

It is necessary for someone to make a point-by-point refutation regarding these developments in Spain: Laudato Si’ and the proposed Sunday-Sabbath for the planet. Who is going to do it? Will the Inter-European Division, the parent organization, do it? Will the General Conference do it? Will someone at our universities make one? If we don’t, then the world will see us as “dishonest.” This is what inspiration says:

“Let it be understood that Seventh-day Adventists can make no compromise. In your opinions and faith there must not be the least appearance of wavering; the world has a right to know what to expect of us, and will look upon us as dishonest, as hiding our real sentiments and principles out of policy, if we carry even the semblance of being uncommitted till the popular voice has pointed out the safe way. The Comforter, the Holy Spirit, which Christ said He would send into the world, was to bear an unwavering testimony.” (Councils to Writers and Editors, p. 95).

So what does God think about all this talk and emphasis by the churches, governments, schools, advocacy groups, globalists – and the whole world, concerning the saving of the environment, sustainability and fostering a relationship with nature and the earth? God calls it idolatry; pure and simple:

“Nature is not God, nor was it ever God … Those who have not a knowledge of God through an acceptance of the revelation He has made of Himself in Christ, will obtain only an imperfect knowledge of Him in nature; and this knowledge, so far from bringing the whole being into conformity to His will, will make men idolaters. Professing themselves to be wise, they will become fools. Those who think they can obtain a knowledge of God aside from His Representative, whom the Word declares is “the express image of his person,” will need to become fools in their own estimation before they can be wise. It is impossible to gain a perfect knowledge of God from nature alone; for nature itself is imperfect.” (Bible Commentary, vol. 6, p. 1068.)

Welcome to the Omega of Apostasy and to modern-day idolatry. The central messages of Revelation 14:6-12 have been replaced by an ecological crusading mission. We are now fully committed to saving the environment, ensuring sustainable development, generating sustainable economic growth, establishing sustainable population control, abortion (part of UN Sustainable Development Goals) and all the other faithless myths that Rome has prepared for us and the world.