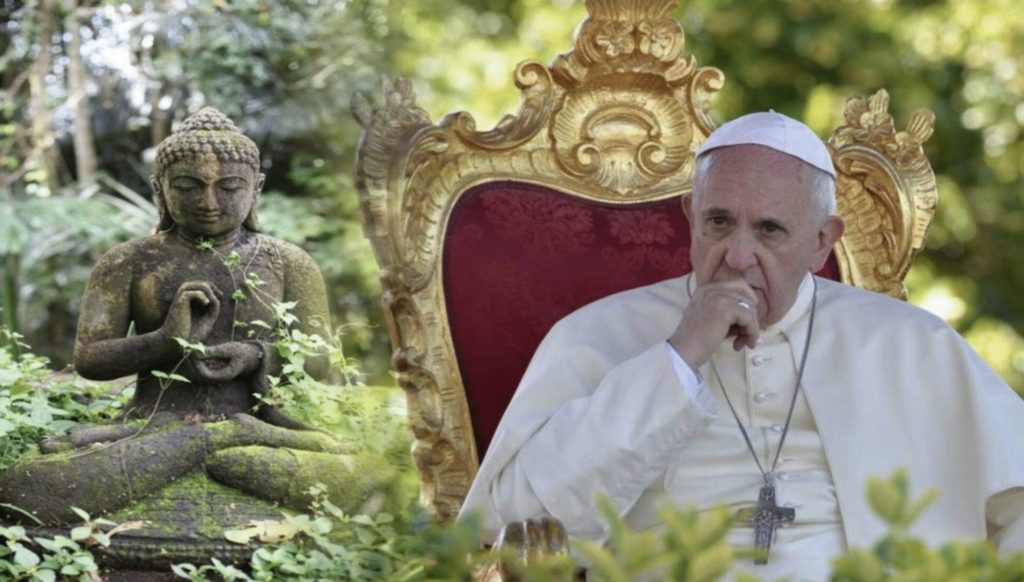 The Feast of Vesakh is the most solemn religious festival celebrated by Buddhists and Hindus worldwide. On this day participants celebrate the birth, the enlightenment, the death and the reincarnation of Buddha. These solemn events in the life of Buddha are commemorated when worshipers sing, pray, meditate and ask for forgiveness. [1]

The Vatican never misses any opportunity to push its green agenda to connect people to Mother Earth. On April 2, 2020, Rome gave their blessings to Buddhists worldwide as they prepare to celebrate the Feast of Vesakh this year in 2020. The Vatican’s pantheistic greeting was similar to the pagan eastern philosophies that teach us that everything is connected together – God, man and nature:

“On behalf of the Pontifical Council for Interreligious Dialogue, we extend our heartfelt greetings and good wishes to you and to all Buddhist communities around the world as you celebrate the feast of Vesakh/Hanamatsuri.

“As we, Buddhists and Christians, learn from one another how to become ever more mindful and compassionate, may we continue to look for ways to work together to make our interconnectedness a source of blessing for all sentient beings and for the planet, our common home.” [2]

This is a mixture of ecumenism (interdependency) and reverence for nature (pantheism). This is an attempt to mingle Buddhist meditation with Christianity. They are promoting the idea that we are all spiritually connected to the universe. According to the Vatican, this so-called nature-based interdependency between Buddhism and Christianity is the foundation for environmental activism. Because we are all “one” we must protect nature through activism, legislation and religion.

Notice how the Vatican did not hesitate to compare Buddha to the Catholic Saint, Francis of Assisi:

“The Feast of Vesakh/ Hanamatsuri prompts us to recall that Prince Siddhartha (Siddhartha Gautama is another name for Buddha) set out in search of wisdom by shaving his head and renouncing his princely status. He traded his garments of Benares silk for the simple robe of a monk. His noble gesture reminds us of Saint Francis of Assisi: he cut his hair and traded his fine clothes for the simple robe of a mendicant.” [2]

This comparison between Buddha and Saint Francis of Assisi is very significant. The Vatican is trying to demonstrate that these two religions are similar. This is ecumenism in action. They are trying to show how the different religions have much in common. No one is wrong and no religion is false as long as we make genuine efforts to examine the beliefs of others with an open mind and focus only on our common ground: love, nature and the universe. 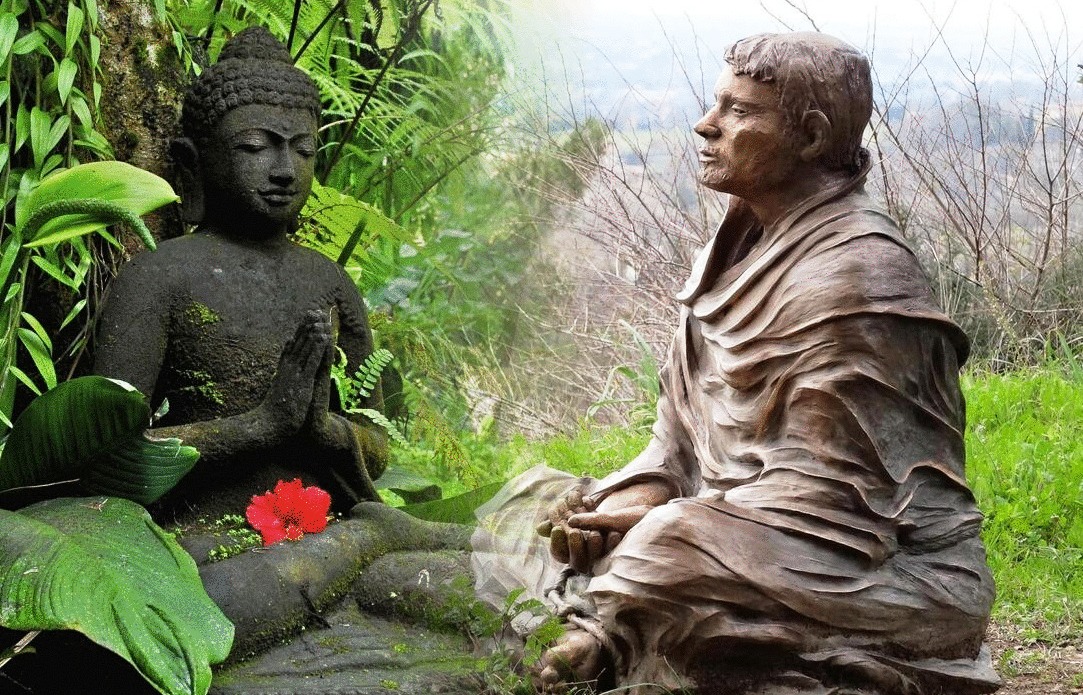 Francis of Assisi is the Patron Saint of ecology. [5] He promoted many of the pantheistic philosophies that are found in paganism. In his canticle (song/prayer) to ‘Brother Sun and Sister Moon,’ Saint Francis advocates the same veneration to the earth commonly found in the non-Christian indigenous religions. Here is part of Saint Francis of Assisi’s pantheistic canticle:

Praised be You, my Lord, with all Your creatures, especially Sir Brother Sun.

Praised be You, my Lord, through Sister Moon and the stars.

Praised be You, my Lord, through Brothers Wind and Air.

Praised be You, my Lord, through Sister Water.

Praised be You, my Lord, through Brother Fire.

Praised be You, my Lord, through our Sister, Mother Earth, who sustains and governs us.

Praised be You, my Lord, through Sister Death. [6]

“LAUDATO SI’, mi’ Signore” – “Praise be to you, my Lord”. In the words of this beautiful canticle, Saint Francis of Assisi reminds us that our common home is like a sister with whom we share our life and a beautiful mother who opens her arms to embrace us. “Praise be to you, my Lord, through our Sister, Mother Earth, who sustains and governs us, and who produces various fruit with coloured flowers and herbs” (Laudato Si, paragraph #1). [7]

“Everything is related, and we human beings are united as brothers and sisters on a wonderful pilgrimage, woven together by the love God has for each of his creatures and which also unites us in fond affection with brother sun, sister moon, brother river and mother earth.” (Laudato Si, paragraph #92). [7]

Spiritualism is becoming the new foundation for the coming, religious new world order. Nature will be the new truth. These will bring the churches into unity with each other and with the universe. It won’t matter who you worship – Buddha, Jehovah, Mother Earth, the universe or some other god – in Rome’s new world order everyone is interdependent with each other. We are all one. There used to be a time when Christianity denounced the false gods and teachings of the world. Not anymore. Thanks to the lovey-dovey propaganda of the ecumenical movement, now everyone is accepted and embraced. This is pure pantheistic spiritualism:

“Love (ecumenism) is dwelt upon as the chief attribute of God, but it is degraded to a weak sentimentalism, making little distinction between good and evil. God’s justice, His denunciations of sin, the requirements of His holy law, are all kept out of sight …  There are few who have any just conception of the deceptive power of spiritualism and the danger of coming under its influence” (Great Controversy, p. 558).

This is the Omega of Apostasy that we were warned about. Pope Francis seeks to unite all the different religions under a single world-wide, pantheistic and ecumenical faith. By deifying nature and promoting ecumenism, the Papacy is building common ground with all the false religious systems of the world (Revelation 17:5). By avoiding biblical doctrine and theology, Rome’s ecumenical movement will transcend the true biblical God of the Bible and encompass all gods known to man.

According to the coming one-world religion predicted in prophecy, those who do not engage in this pantheistic ecumenism and worship are narrow-minded, prideful, self-righteous, hateful, intolerant and a threat to Mother Earth. Those who do not embrace false gods and who only want to cling to their own God and their own truth are the trouble makers. Ecumenism will end any discussion about truth or revelation because the environment, nature, pantheism, Mother earth and the green eco-religion will be the focal point of praising and communicating with God.

The solution to this Omega of Apostasy (nature worship, green Sunday law, radical environmentalism) that is invading all churches and religions is to proclaim the three angels messages of Revelation 14:6-12 to the whole world, in a loud voice, without fear or wavering. The message that must be given is a call to people to fear God, reflect His character, obey His commandments, come out of Babylon, embrace His memorial to creation – the seventh-day Sabbath, refuse the mark of apostasy – the green Sunday law and help others do the same. Seventh-day Adventists were never called to just “believe” in these messages. We were called to receive them and proclaim them with power to the world!

Christ is coming the second time, with power unto salvation. To prepare human beings for this event, He has sent the first, second, and third angels’ messages. These angels represent those who receive the truth, and with power open the gospel to the world” (7 Bible Commentary, 979).