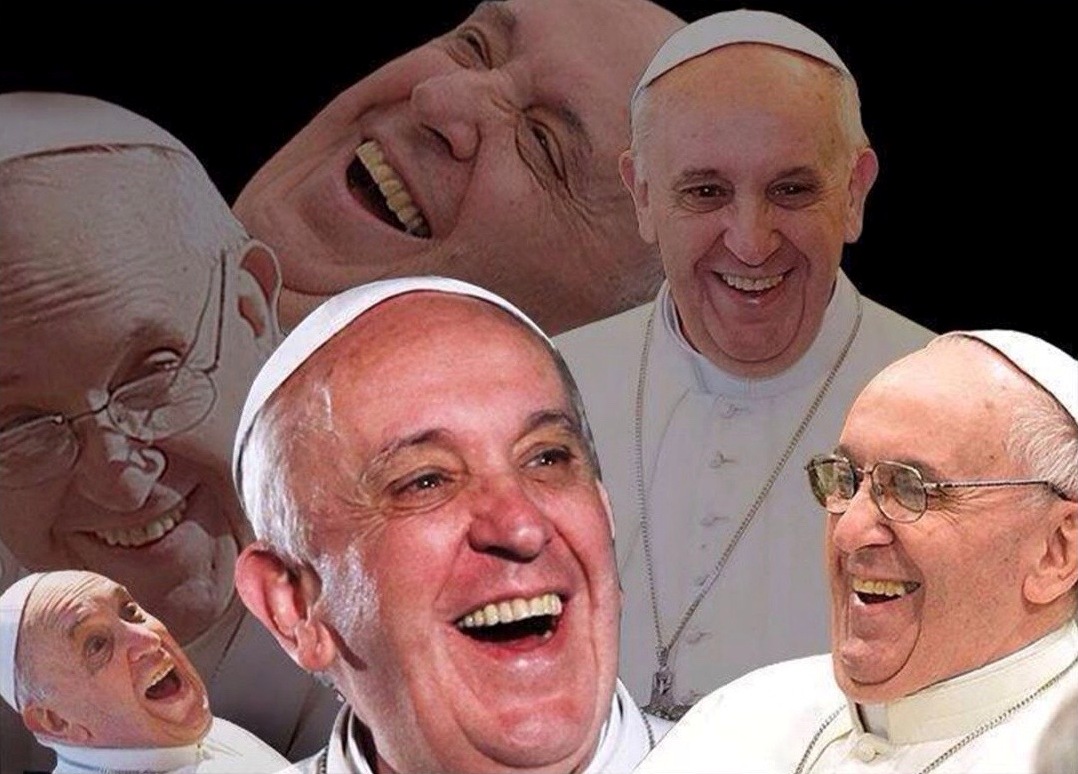 The Pope is laughing at us for embracing his “One Humanity” philosophy.

Pope Francis has been pushing his globalist agenda of a united humanity, a universal family and an ecumenical community through his new papal encyclical called Fratelli Tutti. He has been calling the churches to stand together in solidarity. The phrase Pope Francis is using to unite the world is “One Humanity.” This phrase is the sum of his entire encyclical on the universal brotherhood. 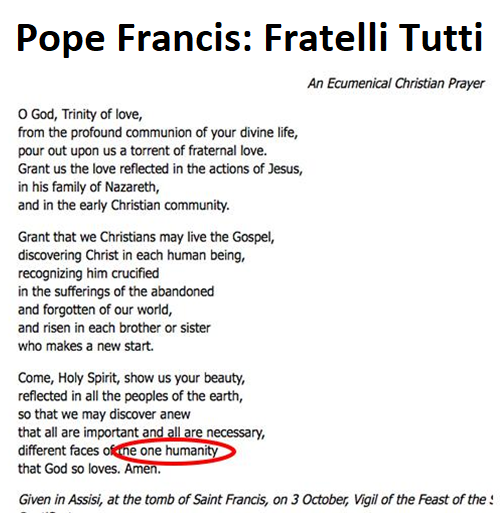 In the last line of the Pope’s encyclical, Fratelli Tuttti, Pope Francis sums up his dream of creating a new universal brotherhood. He calls it the “One Humanity” that God loves. [1] 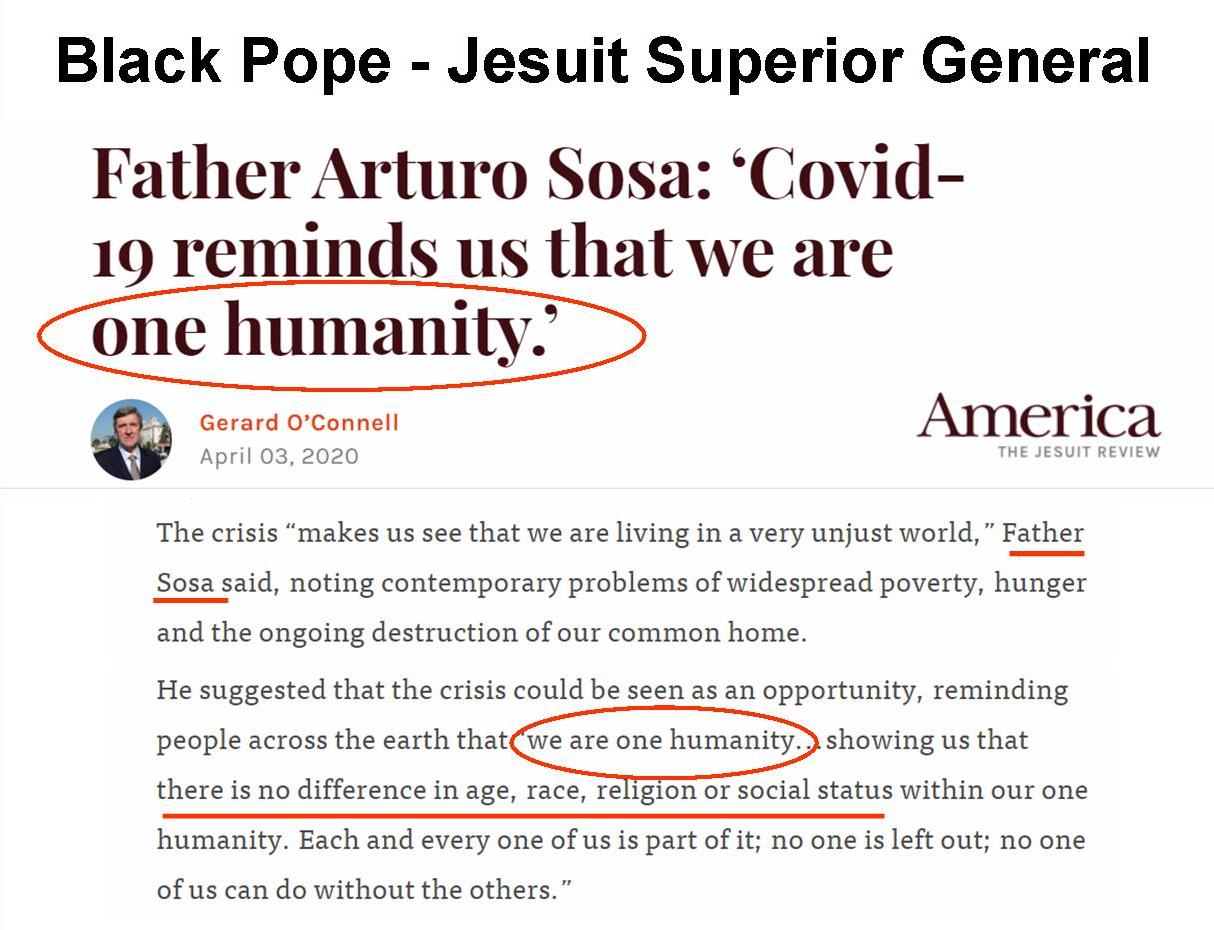 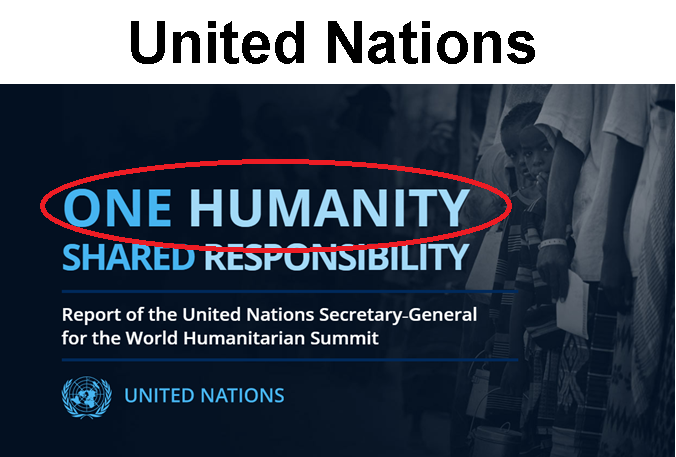 The United Nations has been calling for solidarity and bridge-building for years. [3] They want to end divisiveness and hatred by calling everyone into “One Humanity.”  The United Nations recently declared: “As we grapple with this new reality, we are reminded that we can only overcome this together as #OneHumanity. [4] 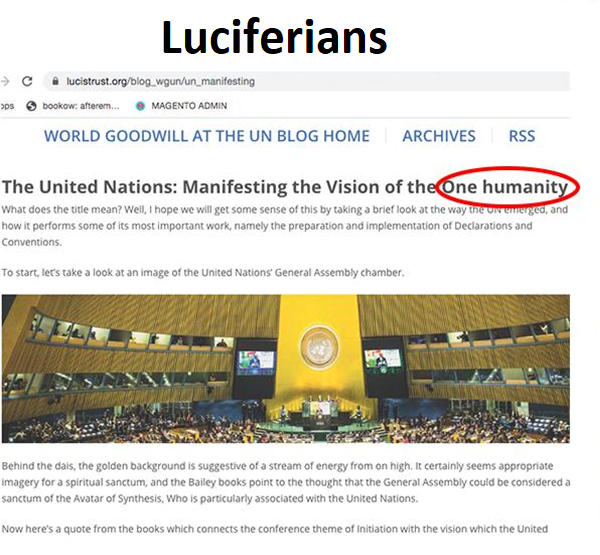 Even Luciferians who openly worship Lucifer (Satan) also support the plan to establish a New World Order based on “One Humanity.” This satanic cult praises the United Nations for its vision of a “One Humanity.” [5] These same Luciferians openly teach that Satan did not fall from heaven because of sin; rather, he came to offer himself as a sacrifice for humanity. [6] 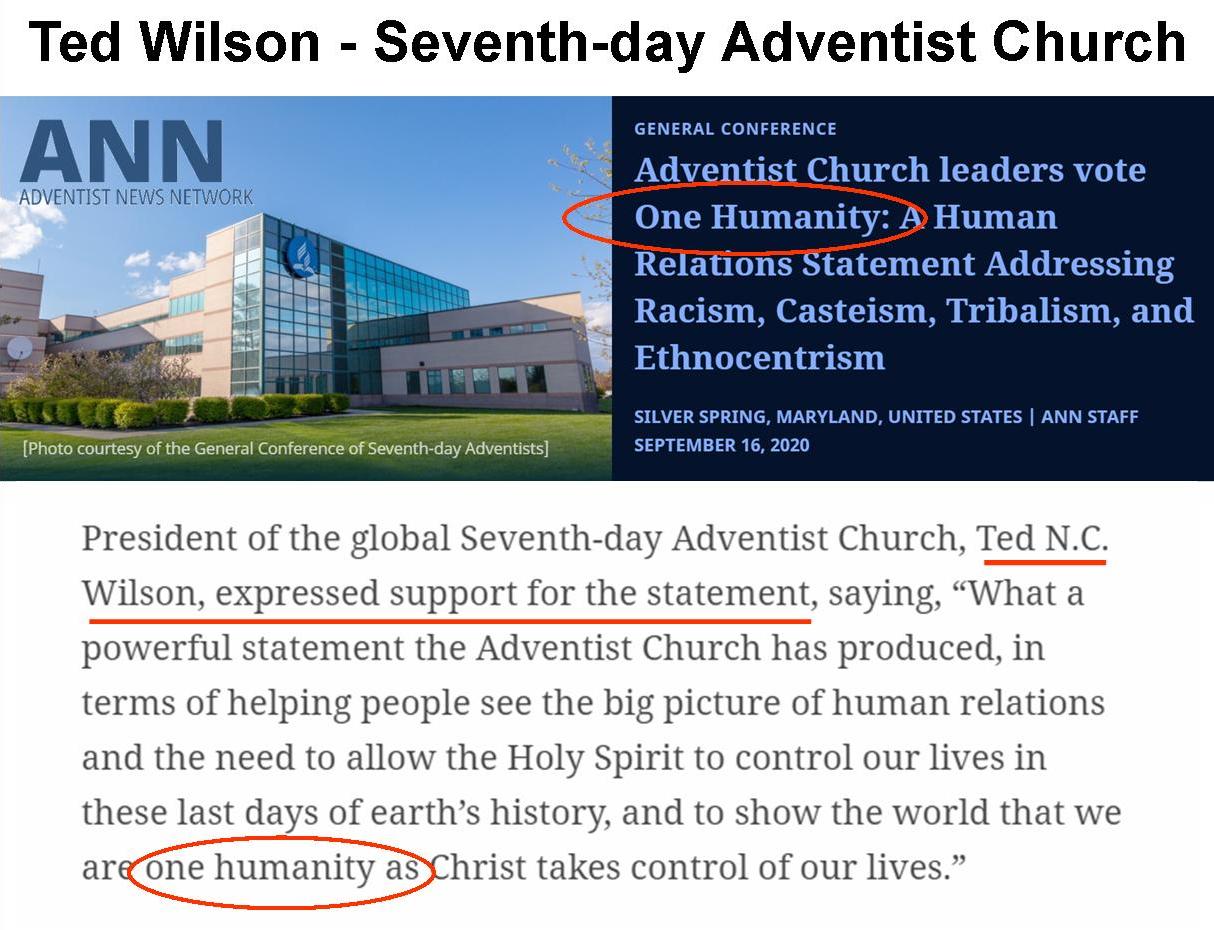 Ted Wilson, President of the General Conference of Seventh-day Adventists, is also praising the “One Humanity” statement released by the church on September 16, 2020. [7] This document also deals with race relations. Remember, in April 3, 2020, the Superior General of the Jesuits made a similar call for a “One Humanity” in relation to race. Some will say that this is just a coincidence.

However, according to another church statement, the recent “One Humanity” document released by the Seventh-day Adventist Church on September 16, 2020 was an effort led by Ganoune Diop. [8] And Ganoune Diop has been pushing for the same universal brotherhood that Pope Francis has championed. [9] Therefore, it is not surprising that the title of the declaration, “One Humanity,” is the same name used by the Jesuit Superior General, Pope Francis, the United Nations and other globalist organizations.

In fact, this week alone, on October 11, 2020 during Annual Council, Ganoune Diop told our world leaders in the Seventh-day Adventist Church that race and racism are concepts that are not found in the Bible. And because these concepts, according to Diop, were invented in the 16th century, he uses the United Nations as the “moral” standard to end “systemic racism.” In the video below, Ganoune Diop is promoting the leftist policies of the United Nations to our world leaders at the 2020 Annual Council.

Ganoune Diop is also trying to use the writings of Ellen White to support the entire “One Humanity” philosophy. Diop was recently quoted in the Adventist Review in which he was selectively picking (cherry-picking) his statements from the Spirit of Prophecy:

Diop then quoted Adventist Church co-founder Ellen G. White, who, in the book Thoughts from the Mount of Blessing, wrote, “Christ tears away the wall of partition, the self-love, the dividing prejudice of nationality, and teaches a love for all the human family. He lifts men from the narrow circle that their selfishness prescribes; He abolishes all territorial lines and artificial distinctions of society. He makes no difference between neighbors and strangers, friends and enemies. He teaches us to look upon every needy soul as our neighbor and the world as our field” (p. 42).

Now it is essential that we apply the biblical ideal, Diop emphasized. “The world is waiting to see our belief in equality translate into equity, fairness, and ultimately righteousness,” he said. [10]

There Are Two Humanities, Not One

According to this declaration, God actually established two humanities and two seeds in our world; the seed of the woman and the seed of the serpent, the children of God and those who are not. This is not being unloving, judgmental or divisive. This is what God says. There are two groups, not one. They are called the saved and the lost, the righteous and the unrighteous.

There are also two paths and two destinies; heaven and hell. There is a heaven to gain and a hell to shun. We know that this goes against the Pope’s agenda and the popular theory that has been adopted by many Christian leaders today that says that we are all in one big happy ecumenical family and each faith is a different path to the same God.

“There are but two classes in the world, and every human being will range under one of these two banners, – the banner of the prince of darkness, or the banner of Jesus Christ” (General conference Bulletin, March 4, 1895).

“There are only two parties in our world, those who are loyal to God, and those who stand under the banner of the prince of darkness” (Bible Commentary, vol. 7, p. 982).

“Two great powers are at work in this world,—one from above, and the other from beneath. Every man is under the influence of one or the other … The will of man is left free to act, and by action is revealed what spirit is moving upon the heart. “By their fruits ye shall know them” (Review and Herald, September 1, 1896, par. 14).

Satan’s One Humanity and One World Government

The theory that the whole world is on God’s side and that no one will be lost (called universalism) originated in the Garden of Eden when Satan contradicted God’s warning and assured Eve: “Ye shall not surely die” (Genesis 3:4). Here Satan declared that faith and obedience to God’s word are irrelevant because, according to him, no one will be lost.

Later, at the Tower of Babel, mankind dreamed of a single world government and a single world religion. This was done in disobedience to God’s instruction to spread throughout the earth. Instead, they chose to stay together in defiance. God intervened and scattered the human race across the earth by dividing the languages ​​of man (Genesis 11:1-9).

Bible prophecy predicts that in the last days the world will be under the control of a single political-religious government that will encompass the entire world. It is described in the book of Revelation:

The whole world will be united, including Catholics, Protestants, pagans, spiritualists and agnostics. Biblical prophecy also tells us that this end-time world power will dominate world trade, international politics and military might, and bring humanity to the brink of total self-destruction during the implementation of the mark of the beast.

If we embrace the true gospel of Christ, we will not fall into the deadly error of universalism. If we really believed in the Holy Scriptures, we would denounce the apostate corporate solidarity of the Antichrist that teaches that the whole world is on God’s side.

“He that rejecteth me, and receiveth not my words, hath one that judgeth him: the word that I have spoken, the same shall judge him in the last day.” John 12:48.

Can we read these words and leave people in their sins? Will we continue to see souls die every day without Christ? Will we continue to deceive ourselves or will we allow others to be deceived with the error of universalism? It is abundantly clear that humanity faces two different eternal destinies, not one.

Freemasons, Luciferians, Marxist socialists, and even faith-diluting Christians are embracing the universal brotherhood of “One Humanity.” In this brotherhood, Jesus is equal to Lucifer. Truth and error, light and darkness and Christ and Antichrist become one of the same, all in the name of peace and unity! They are crying out: “Peace, peace; when there is no peace” (Jeremiah 6:14). Far from obtaining peace, they are “laying up wrath for the day of wrath” (Romans 2:5).

“Babylon will make all nations drink of the wine of the wrath of her fornication. Every nation will be involved … There will be a universal bond of union, one great harmony, a confederacy of Satan’s forces” (Last Day Events, p. 136).

“The professed Protestant world will form a confederacy with the man of sin, and the church and the world will be in corrupt harmony” (Bible Commentary, vol. 7, p. 975).

As Satan consolidates his forces into his one universal brotherhood, God’s faithful people will be giving the final invitation of mercy to the world as found in Revelation 14:6-12 and 18:1-4.

“Revelation 18 points to the time when, as the result of rejecting the threefold warning of Revelation 14:6-12, the church will have fully reached the condition foretold by the second angel, and the people of God still in Babylon will be called upon to separate from her communion. This message is the last that will ever be given to the world” (Great Controversy, p. 390).

Under the power of the Latter rain, “They will declare the truth with the might of the Spirit’s power. Multitudes will receive the faith and join the armies of the Lord” (Evangelism, p. 700).