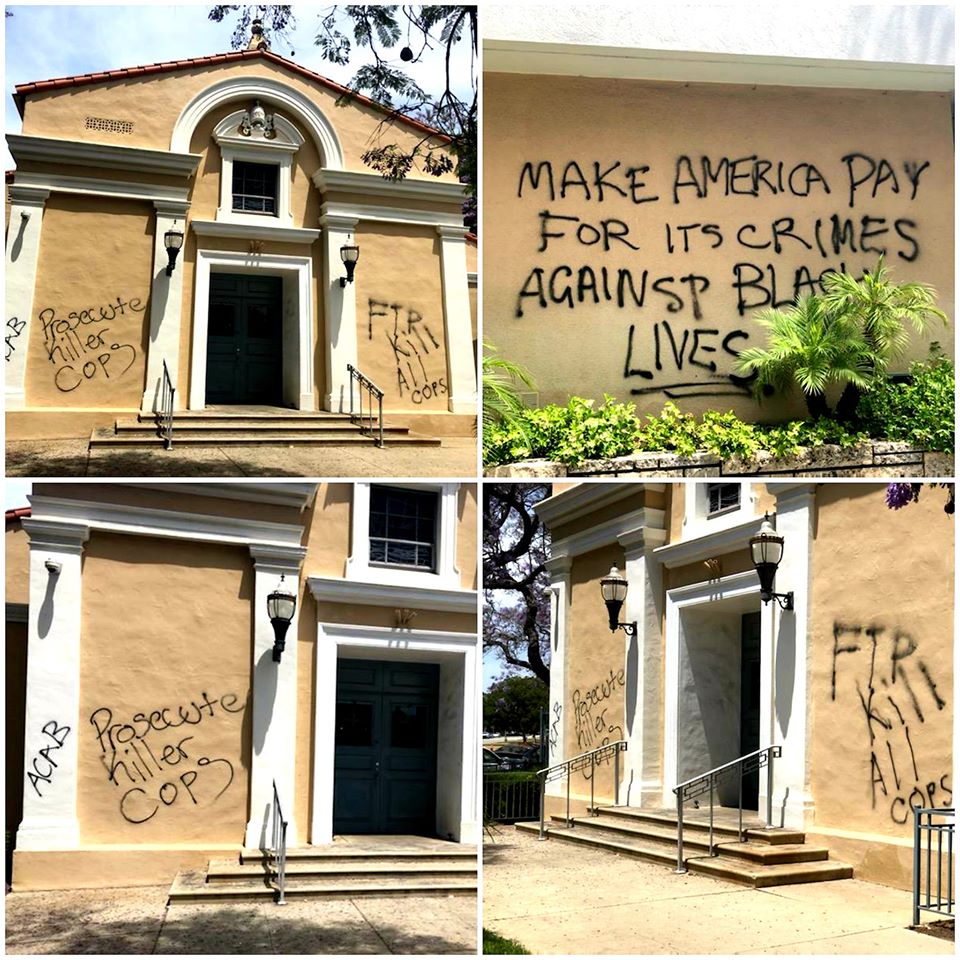 A Lebanese church in Los Angeles was vandalized by anarchists during protests that have gripped the nation. [1]

Christianity is the cornerstone of Western civilization. The Bible speaks against lawlessness, anarchy, the mob mentality, homosexuality, feminism, abortion and many of the guiding principles proposed by revolutionaries trying to destroy our nation. Leftist and anti-Christian anger is now targeting religious symbols and churches. This is all a diabolical assault against the God of the Bible and the moral principles contained in His word.

Islamic mosques are not being targeted. Buddhist and Hindu temples are being left alone. It’s Christianity and the Bible that are under attack. Under the illusion of racial equality by the Black Lives Matter revolution, Satan is showing his contempt to the God of the Bible. He doesn’t care if Eastern paganism flourishes; they are leading people away from God anyway. It’s Western civilization and the Christian faith who gave birth to our morals and values that are being targeted. The war is in full swing.

BHAZ — Black House Autonomous Zone — has been spray painted on the columns of the historic St. John’s church outside the White House. pic.twitter.com/or2C2myVSX

St. John’s Church has been vandalized again by Black Lives Matter protesters during their “Black House Autonomous Zone” (BHAZ) protest. The BHAZ is an attempt to seize land near the White House and turn it into a protest encampment.

We condemn the scandalous and pointless attack on the Black Madonna of Częstochowa in Breda, which commemorates the Polish soldiers who liberated the city from the Germans in 1944.

This is a shocking and senseless attack on both a war memorial and an important religious symbol. pic.twitter.com/ucNUP6dXkm

The Black Madonna and baby Jesus were vandalized by Black Lives Matter protesters. This monument was dedicated to Polish soldiers who gave their lives defeating the Nazis. They liberated this city from the Germans during World War II. Think about this. Does Black Lives Matter want to fight racism by vandalizing the monuments of brave people who REALLY fought against fascists and racists? This makes no sense; but then again, the current crisis is not about civil rights. It’s about replacing Western civilization with Marxist communism.

At BYU the statue of Brigham Young himself was vandalized last week…which is awfully close to that for a lot of Mormons. pic.twitter.com/Ztq3NXhrxc

No Christian institution or Christian philosophy is safe. A statue of Brigham Young is vandalized at the university that bears his name.

"How ironic! Lenin’s Marxism was responsible for the death of untold millions. The first President of the United States, though, established one of the greatest democracies the world has ever known." @MarkPowell0728 https://t.co/trpSeJ8Lre

This picture says everything. The statue of the father of our nation, George Washington, is torn down and vandalized in the state that bears his name. While the statute of Vladimir Lenin, the former communist leader of the Soviet Union, remains intact in the city of Seattle, Washington. Amazing. It was Lenin’s revolutionary theories that led to the slaughter and enslavement of millions of innocent people. This period of anarchy in America is not about racial equality. This is about hatred of the West and hatred towards Christianity that gave birth to Western civilization.

The mob will not stop until America and Christianity have been wiped out. The only thing more tragic than the violence and riots of the anarchists is the number of silenced and compromised Christians and Seventh-day Adventists who have sided with the ungodly revolution. [2] The most disturbing thing is seeing “believers” defend the actions of the mob. We fully expect the outside world to attack the faith, but what’s most worrying is the constant assault on the faith by those who profess to be Seventh-day Adventists.

“The time of trouble has already begun. We hear continually of riots and accidents, of murders and robberies. Human life is no longer safe unless under the protection of God. God’s servants must not be surprised that they meet with great difficulties and persecution at this time. In His day, the world’s Redeemer, the Son of God, was shamefully treated by the people He came to bless. He had to go from city to city to ensure His safety, and this persecution followed Him until His work on earth was accomplished” (Manuscript Release, Vol. 21, p. 101).