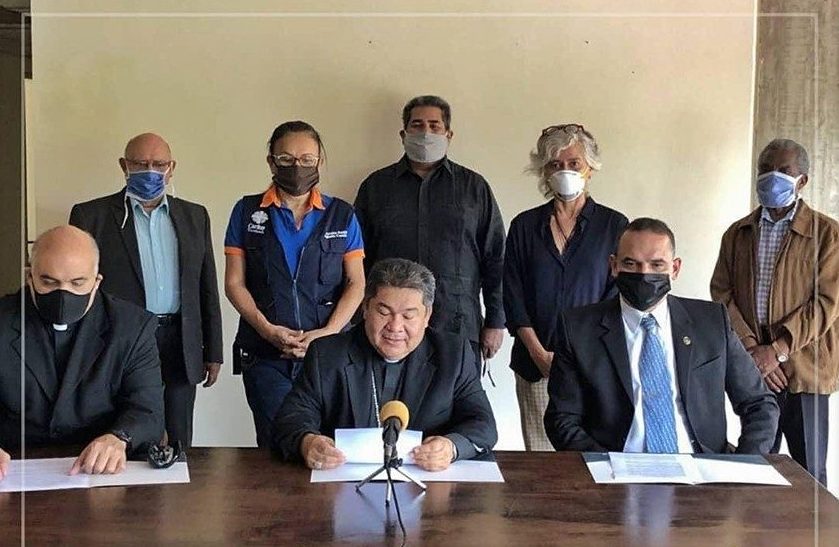 A new religious, social and pluralistic organization was just created in Venezuela to help fight poverty, corruption and promote unity. The Vatican has just announced that Roman Catholics, Evangelicals and Seventh-day Adventists have come together to create the new “Venezuelan Interreligious Social Council.” [1]

On April 22, 2020, a “Joint-Declaration” was announced that explains the purpose of this new organization. They are uniting to fight “COVID-19” and to bring “peace,” establish a “common good” and to “build trust” within Venezuela. The Venezuelan Social Interreligious Council will work to establish: “social justice, equality, mutual respect, tolerance and respect for liberties.”

The new council is comprised of the Catholic Church, the Evangelical Council, the Seventh-day Adventist Church, the Jewish Community, the Confederation of Christian Churches, the Anglican Church and the Caracas Council of Historical Churches. Their joint-declaration is a promise to work towards “peace and reconciliation, with inclusive construction mechanisms and animated by a participatory and supportive spirit, capable of recovering the common values that must sustain the urgent actions that our people need today.“ [1]

We are forming strategic alliances with Rome and with the other churches in order to fight for social justice. The social gospel is an attempt to redefine the work of the church by means of social action rather than through the presentation of the everlasting gospel of Revelation 14. When the social gospel enters the church, the preaching of the Three Angels’ Message begins to decline and a new agenda of attacking the social inequalities of the world begins to evolve.

“The Lord designs that the proclamation of the third angel’s message shall be the highest, greatest work carried on in our world at this time … This message is the gospel message for these last days, and in no case is it to be overshadowed by other interests, and made to appear an unessential consideration” (Manuscript Release, Vol. 9, p. 82).

“God has not called His people to ignore present truth for these last days, and take up a work that so absorbs workers and means that the Lord is not represented as He would otherwise be” (Ibid., p. 84).

“The truths contained in the Revelation are to be taught, and we are all to learn the lessons of the fearful import of the things to transpire in these last days of this earth’s history. You have lost sight of these things. Other things introduced by you have not come in under the instruction of God. You need to be converted” (Ibid., p. 86).

“There are many places where the means should have been appropriated to make aggressive warfare … Every stroke should tell for God and His holy Sabbath. That is to stand out in all our work distinctly and pronounced, to be a witness that the seventh day is the sign, the seal of God. The Sabbath is to be exalted and made prominent more than is done now” (Ibid., p. 88).

It is difficult to imagine anything more basic to the Seventh-day Adventist faith than awakening the inhabitants of the world through the proclamation of the Three Angels’ Message. Any other work that we can do should help complement these messages and not silence them. But strangely, the prevailing attitude today would rather seek an association with Rome. Some would rather fight for social, economical and ecumenical initiatives instead of engaging in “combat with the beast and his image” (Early Writings, p. 254).

We are uniting with Rome to push the “new” moral issues of the day. The new moral issues are not the Ten Commandments, the Second Coming of Christ or the Investigative Judgment; no, it’s about eliminating poverty, the COVID-19 epidemic, ecumenism and saving the environment. Political organization and social activism have trumped the preaching of the Three Angles’ Message. We are working in vain to create a perfect Utopian society in this world. Our pioneers were a different people. For them the Three Angels’ Message was their main burden.

“Our people need to be silent upon questions which have no relation to the third angel’s message.” (Selected Messages, Book 2, p. 336).

Notice how clearly our pioneers spoke concerning these issues. W. A. Spicer (1865-1952) was a pioneer missionary, editor of the Review and Herald and President of the General Conference from 1922-1930:

“Men talk and dream of a world-conversion; but we know the futility of such a thought. All the forces of this great missionary conference (1910 Edinburgh Ecumenical Council) cannot remove the slums and the depravity of these ancient narrow passages in Edinburgh, that adjoin the very place of the missionary congress. The coming of the Lord is the only hope of the world. The greatest betrayal of trust in the history of man would be for Seventh-day Adventists to settle down to mere philanthropic and humanitarian efforts. We can never heal the hurt of this world; but we can obey our Lord’s command and carry the witness of his last message to all the world, and then He will come to put an end to sin.” (W. A. Spicer, Notes from the Edinburgh Missionary Conference, Review and Herald July 21, 1910).

We need leadership today that will share these same core values.