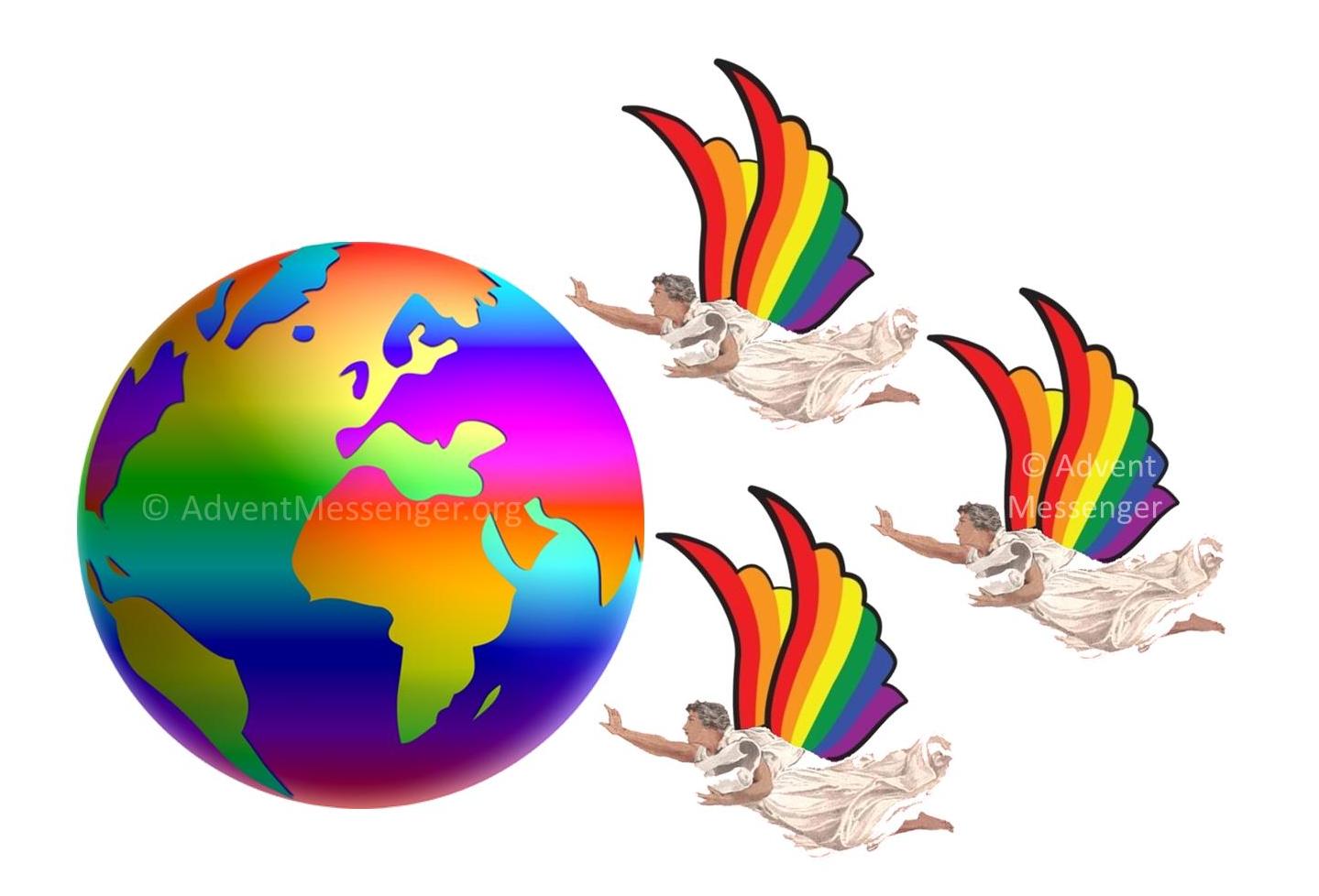 “We have far more to fear from within than from without. The hindrances to strength and success are far greater from the church itself than from the world … But how often have the professed advocates of the truth proved the greatest obstacle to its advancement! The unbelief indulged, the doubts expressed, the darkness cherished, encourage the presence of evil angels, and open the way for the accomplishment of Satan’s devices” (Last Day Events, p. 156).

What I find most disturbing today is not the attacks on the faith by the outside world. That’s fully to be expected. What is most troubling to me is the constant assault against our faith by individuals who profess to be Seventh-day Adventists.

We are witnessing unprecedented changes in Adventism. The authority of God is being challenged, morality is being redefined and our beliefs are being contested. And it’s not just the world who is doing this. We have some very misguided leaders in positions of trust who are spreading the same radical, secular lies that are undermining our historic faith.

“There are really only seven passages in the Bible that refer directly to homosexual behavior, and none of them are associated with Jesus. The Bible says nothing about ‘homosexuality’ as an innate dimension of personality. Sexual orientation was not understood in biblical times. Passages in the Hebrew Bible and New Testament have been interpreted as involving same-sex sexual acts and desire.” Email from Christian B. Schäffler (schaeffler@apd.info), Monday, August 26, 2019.

This is the same argument used by liberal psychotherapists who say that homosexuality is genetic. Genes are the codes that give us our traits, characteristics and personality. And if homosexuality is somehow passed on to some people involuntarily through some kind of unknown dimension or coding, as Schäffler believes, then we must learn how to accept their “orientation” and their “identity.”

The problem with this kind of thinking is that it’s not supported by scientific evidence [3] or by the Word of God. This is the same reasoning used by LGBT+ activists since the 1960’s and 1970’s. Liberal psychotherapists have been promoting the unproven theory that homosexuality is a condition that people are born with – similar to how some people are left-handed, have red hair or have green eyes.

First of all, the Bible doesn’t condemn a person for having biologically “innate” green-colored eyes. God doesn’t denounce someone for being born with red hair. Being left-handed is not morally wrong. In fact, genetic problems are not considered sinful. However, homosexual activity is explicitly condemned by God in His word. Why? Because homosexuality is sinful behavior and not some “innate dimension in our personality (genetics).”

Created with an Innate HETEROSEXUAL Orientation

The simple truth is that before sin entered our planet, before the fall of man in the Garden of Eden and before the existence of sexual perversion – God created male and female to be HETEROSEXUAL. God created both man and woman to be attracted to the opposite sex. God designed for male and female to reproduce heterosexually and to enjoy sexuality within the will of God – one man and one woman joined together in holy matrimony. The Bible says that “everything” God made was “very good” (Genesis 1:31).

Heterosexuality is God’s will for mankind, and it’s time for our own people to re-engage the truths of Genesis and to re-engage with Jesus. Jesus fully endorsed this heterosexual arrangement because He was the One who created us in the beginning. He was there in the Garden of Eden during the 7-day creation week (Colossians 1:16, John 1:3, Hebrews 1:2).

Adam also affirmed this heterosexual relationship and declared God’s will for the human race: “Therefore shall a man leave his father and his mother, and shall cleave unto his wife: and they shall be one flesh.” Genesis 2:24.

After the fall of man our world was marred by sin. Man became ungodly in his thoughts and perverted in his imaginations. Man began embracing abnormalities that “were against nature” such as same-sex attraction and homosexuality (Romans 1:26, 27). The Bible describes homosexual activities as “going after strange flesh” (Jude 7).

But even after thousands of years of fornication, adultery and homosexuality – Jesus still affirmed and endorsed the original heterosexual relationship of one man and one woman in holy matrimony for the human family. Jesus asked this question to His generation:

“Have ye not read, that he which made them at the beginning made them male and female, And said, For this cause shall a man leave father and mother, and shall cleave to his wife: and they twain shall be one flesh? Wherefore they are no more twain, but one flesh. What therefore God hath joined together, let not man put asunder.” Matthew 19:4-6.

Jesus commanded that this original plan, put together by God, should not be torn apart by any man. Thus the heterosexual relationship between one man and one women is still in effect today.

Then we have the Apostle Paul who decades later affirmed that God’s plan had not changed with the passing of time. In Ephesians 5:22-33 Paul affirms the sexual intimacy of one heterosexual man with one heterosexual woman joined together in holy matrimony. Paul also reminds the world and the church that sexual brokenness, including homosexuality, is sin and can be overcome by the blood of Jesus.

When we come to Christ we can have victory over every wrong and harmful desire. Paul says God can heal our broken lives and our many short-comings:

“Do you not know that the unrighteous will not inherit the kingdom of God? Do not be deceived. Neither fornicators, nor idolaters, nor adulterers, nor homosexuals, nor sodomites, nor thieves, nor covetous, nor drunkards, nor revilers, nor extortioners will inherit the kingdom of God. And such were some of you. But you were washed, but you were sanctified, but you were justified in the name of the Lord Jesus and by the Spirit of our God.” 1 Corinthians 6:9-11 (NKJV).

Mr. Schäffler also says that “sexual orientation” was not understood in biblical times and that same-sex (homosexual) acts and desires are not the same as homosexual orientation. This is a common, modern argument made by compromising Christians who are trying to pander to the LGBT+ movement. This generation is guilty of trying to separate gender from biological sex. They think that because the Bible doesn’t mention the word “gender” that somehow it’s left to the godless, moral-less generation of the 21st Century to figure this out.

There is no man-made “gender spectrum” that we hear so much about in Facebook with its growing list of gender identities. [4] This is the invention of man. Gender identity is a human fabrication designed to accommodate everyone’s personal sexual preference. It is the product of the LGBT+ movement to destroy and mar God’s original design for reproducing. Gender identity is based on feelings while biological sex is based on God’s creation.

But today sexual revisionists from the LGBT+ community have attempted to separate biological sex from gender identity. And it is sad that some Seventh-day Adventists who seem to know so little about the Bible and nothing about the Spirit of Prophecy are accepting this worldly thinking when it comes to sexuality.

What About Same-sex Orientation – Is this also Sin?

Can my sexual orientation differ from my biological sex? Or can I have a homosexual orientation with patterns of same-sex attractions as long as I don’t engage in sexual activities with same-sex partners? Apparently this is what Mr. Schäffler believes because he says the Bible only speaks about “same-sex relationships (sex) and desires,” not homosexuality when it’s an “innate dimension of personality.”

Jesus said sin is not just defined or limited to external acts, but sin is also a state of mind. Jesus clearly taught that sin can be present in our heart and thoughts, not just our actions: “But I say unto you, That whosoever looketh on a woman to lust after her hath committed adultery with her already in his heart.” Matthew 5:28.

“God’s law reaches the feelings and motives, as well as the outward acts. It reveals the secrets of the heart, flashing light upon things before buried in darkness. God knows every thought, every purpose, every plan, every motive. The books of heaven record the sins that would have been committed had there been opportunity.” (Bible Commentary, Vol. 5, p. 1085).

The problem today is that some people in the church want to define or limit how far-reaching God’s law is with regards to homosexuality. We are trying to say that God’s law only addresses outward acts but not LGBT+ orientation or identity. This is incompatible with the words of inspiration.

The heart, which includes our innermost thoughts, feelings and motives, is where sin is conceived. These too will be judged by the law of God – not just the outward acts. God never panders to the sinner or attempts to accommodate or justify sin – whether outward acts or the thoughts of our heart and mind. Too many are abandoning divine revelation and are running with the world’s agenda. Whenever we tell people who are stuck in the trappings of the LGBT+ lifestyle that they can keep their sinful orientations, we deny them the victory that God’s longs to give them.

It is God’s world-view of truth upon which His church is established. It is God who defines what sin and disobedience is. It is also God alone who defines all the aspects of our lives that will come into judgment. He calls certain lifestyles sin, and He makes no distinctions between the heart and the outward acts.

No man can make these judgment calls, but God can and has. God doesn’t hate anyone when defining sin or identifying our sinful hearts. He loves all people for we are all sinners; but in love God calls us all to repent and to forsake sin.

“God does not send messengers to flatter the sinner. He delivers no message of peace to lull the unsanctified into fatal security. He lays heavy burdens upon the conscience of the wrongdoer, and pierces the soul with arrows of conviction. The ministering angels present to him the fearful judgments of God to deepen the sense of need, and prompt the cry, ‘What must I do to be saved?’ Then the hand that has humbled in the dust, lifts up the penitent. The voice that has rebuked sin, and put to shame pride and ambition, inquires with tenderest sympathy, ‘What wilt thou that I shall do unto thee?’ ” (Desire of Ages, p. 104).