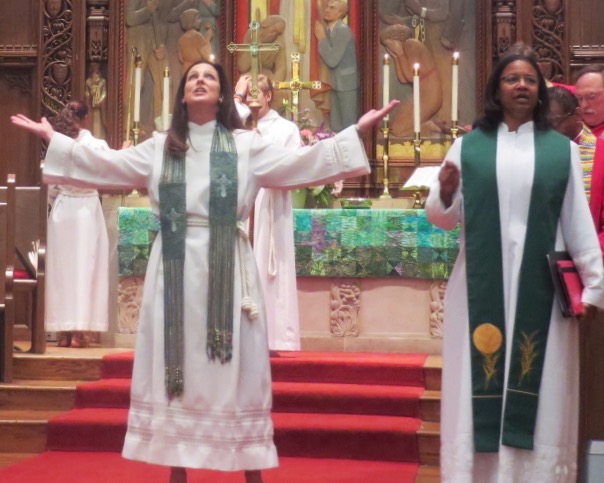 The role of women pastors has risen dramatically during the last 25 years. This is the findings of a survey that was recently done and shows that the number of female pastors has tripled since the 1990s. [1]

More and more women are pursuing pastoral leadership positions and many denominations are supporting this new growing trend. This is a relatively new phenomenon as a growing number of people in this new millennium believe that times have changed.

But what does the Bible actually say? This issue needs to be decided on what the Bible actually teaches. Most of the discussions on this matter are absent of any clear-cut Biblical references that address specifically the role of women pastors. The truth is that the Bible is very clear on this subject. There is a wealth of information found in the Holy Scriptures. There doesn’t need to be any controversy because it’s not difficult to grasp. The problem is not in the Bible, the problem lies in our unwillingness to obey what is written.

We begin in the book of Genesis where God preached His first sermon from the Garden of Eden. God proclaimed the gospel through a Messianic prophecy. He announced that one day Jesus would come through the seed of a women to crush the head of the serpent.

This is a Bible verse that all parties basically agree on. There is no controversy here. The controversy arises in the very next part of God’s sermon. It’s this second part of His message that most people either reject or ignore.

“Unto the woman he said, I will greatly multiply thy sorrow and thy conception; in sorrow thou shalt bring forth children; and thy desire shall be to thy husband, and he shall rule over thee.” Genesis 3:16.

This was a direct decree by God that resulted in consequences or judgments upon the human family. These judgments have never been lifted and never will be until this world comes to an end. Not only were there direct consequences placed on Eve but also upon Adam. Adam received three times more consequences than Eve did. Adam’s judgments are found in versus 17, 18, 19.

It was right after Adam and Eve sinned that God defined the roles of men and women. It was after the fall of the first couple when the origin of leadership was established in the human race. When God decreed to Eve that “he [Adam] shall rule over thee,” this decree has never been lifted. If fact none of the judgments described in Genesis 3:16-19 have ever been reversed. Women still feel pain in labor. Thorns still come out of the ground. Man still has to work by the sweat of his brow, and we still return to the dust at the time of death. Nothing as far as God is concerned has changed.

This Order was Followed by God’s People

With regards to leadership roles among the family of God, the decree “he shall rule over thee” (Genesis 3:16) was still in effect long after Adam and Eve. This truth was seen throughout the period of the patriarchs. The leadership roles were passed down from generation to generation through the firstborn males. By God’s design the patriarchs and their first-born successors were the spiritual heads and leaders of their families. God gave them the responsibility to govern their families and to instruct them in the ways of the Lord.

“For I know him [Abraham] that he will command his children and his household after him, and they shall keep the way of the LORD, to do justice and judgment; that the LORD may bring upon Abraham that which he hath spoken of him.” Genesis 18:19.

“Governing the House of God”

Later, God organized His people as a nation and His original Genesis 3:16 decree on “rulership” was codified by law among His people.

There was a sacred order that was followed in the “house of God,” and this order was done as the “LORD God of Israel commanded:”

“These were the orderings of them in their service to come into the house of the LORD, according to their manner, under Aaron their father, as the LORD God of Israel had commanded him.” (1 Chronicles 24:19).

1 Chronicle 24 lists all the different names of the governing/leading priests. All were male. This chapter lists the generations of priests starting with Aaron. It lists the titles of the fathers, the principle fathers, the sons, the scribes, the priests, the chiefs, and the governors. They were all Levites, they were all men and they alone were in charge of the Lord’s house.

There were women who served as prophets and judges in Israel, but these roles had nothing to do with “governing” or leading in the sanctuary services or in the Lord’s house. Not even the King of Israel could usurp the authority of the priests and administer the sacrifice in the holy place. The king, prophet and judge had separate and equally important roles among the nation – but they could not exceed any authority over the priests with regards to the sanctuary.

This was the order that the “LORD God of Israel” established. It is indisputable that no women “governed” in the “sanctuary” or in the “house of God.”

Ruling the Church of God

The office of the “priest” was synonymous to “rulers” and “leadership” roles in the house of God. This is very significant because that is the very same role given to the elders in the New Testament church order.

“For if a man know not how to rule his own house, how shall he take care of the church of God?” 1 Timothy 3:5.

The fact that a man could rule his home well was a prerequisite given in the New Testament for ruling the church of God. This principle is consistent with the Genesis 3:16 degree given to Eve which stated that Adam would rule over her. This prerequisite in 1 Timothy 3:5 is also consistent to the roles of the all-male priesthood. Adam, the patriarchs, the priests and the elders were to be governors, ruling the house of God.

When Jesus finally returned to heaven and the apostles were left by themselves, they didn’t reinvent the ordination service or the roles of position and authority.

“And they gave forth their lots; and the lot fell upon Matthias; and he was numbered with the eleven apostles.” Acts 1:26.

What is even more significant is that the eleven Apostles (Judas had commuted suicide) never even considered selecting a woman to fulfill this Apostolic/leadership role. Notice the criteria they used when filling this vacant position:

“Wherefore of these men which have companied with us all the time that the Lord Jesus went in and out among us, Beginning from the baptism of John, unto that same day that he was taken up from us, must one be ordained to be a witness with us of his resurrection. And they appointed two, Joseph called Barsabas, who was surnamed Justus, and Matthias.” Acts 1:21-23.

There were several qualified women, yet none of them were considered.

The Holy Spirit commanded that Paul and Barnabas be ordained by the laying of hands. The church obeyed and placed them into positions of trust and authority. This act was consistent and in harmony with the long-standing role of men in leadership roles in the family with God.

“As they ministered to the Lord, and fasted, the Holy Ghost said, Separate me Barnabas and Saul for the work whereunto I have called them. And when they had fasted and prayed, and laid their hands on them, they sent them away.” Acts 13:2, 3.

Qualification for Church Overseer/Elder Given in 1 Timothy 3:1-7

When we survey the Biblical data found in God’s word with regards to leadership roles we see a long chain of truth that is consistent to the decree made by God in Genesis 3:16. Notice the instructions and the qualifications given when selecting overseers, bishops and elders:

Qualifications for a Ruling Elder Given in Titus 1:5-9

The key passage that forbids women from “rulership” roles in the church is found in 1 Timothy 2:11-14. Paul doesn’t regard his current culture when making the following prohibition. He doesn’t look at the popular trends of his day. Paul was inspired by the Holy Spirit when he gave the following counsel. His opposition to having women usurp the authority over men in the church was based on the book of Genesis and the story of Adam and Eve.

“Let the woman learn in silence with all subjection. But I suffer not a woman to teach, nor to usurp authority over the man, but to be in silence. For Adam was first formed, then Eve. And Adam was not deceived, but the woman being deceived was in the transgression.” 1 Timothy 2:11-14.

This is exactly what God told Eve, “he will rule over thee.” Genesis 3:16. The context is abundantly clear. There is no reason for any confusion or for people to err. We either accept or reject God’s divine decree and Biblical order that He established in the beginning. Paul restricts women from having spiritual authority in the house of God because of what took place in the Garden of Eden. The nature of the fall of man impacted the spiritual nature of the role of headship and leadership.

NONE of the consequences imposed by God on the human family found in Genesis 3:16-19 have ever been lifted. No man has the authority to do it. Jesus didn’t do it. The Holy Spirit didn’t do it. Moses and Arron didn’t change the order. No one in the early church ever attempted to changed what God had decreed.

With regards to women pastors – a pastor is a title that describes one who is in the position to shepherd and lead the church. It is a position of authority. This is a role that is deep-rooted in Biblical history and theology and is reserved for men. This truth is confirmed in the Scriptures cited above.

This doesn’t negate the fact that God uses women in a verity of roles. They can preach, teach, exhort, be evangelists, be missionaries, prophets and fulfill many more duties. But governing or ruling the church of God is not one of them.

God’s word is under attack as the limits and laws He has established are being disregarded by both the world and the church. The family is under attack and is being redefined by our culture – so now there are “families” that have two mommies or two daddies. Holy matrimony is also under attack and has been changed by the laws of man to include same-sex marriages. Now the church is also being targeted by those who would reduce the holy order established by God and turn it into the disorder found among the pagan priestesses in ancient Babylon, Egypt and Rome.

“As for my people, children are their oppressors, and women rule over them. O my people, they which lead thee cause thee to err, and destroy the way of thy paths.” Isaiah 3:12.