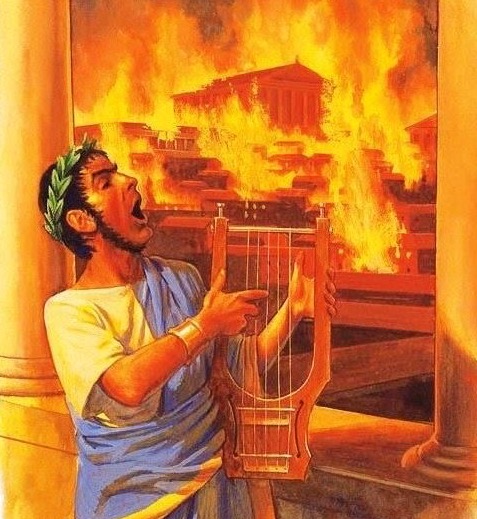 While Rome burned in 64 AD and while people were dying and suffering, the Emperor Nero played his fiddle and sang.

Christian persecution around the world is reaching genocidal levels. The massacres and violence towards believers is causing their numbers to disappear in many parts of the world. [1]

The Venezuelan crisis is erupting as thousands of pro and anti Maduro forces clash on the streets. Violent crowds threw rocks and fired weapons at military forces while armored vehicles plowed into protesters. Venezuela is in complete confusion and mayhem as civil war approaches. [2]

The immigration/refugee crisis is enveloping the world. Tens of thousands of immigrants are dying, starving, being exploited, abused and sex-trafficked as criminal organizations take advantage of these human catastrophes. [3]

With everything we have going on in our world Pope Francis delivered an important message this week to beauty parlors, hair salons, hair cutters, hair stylists and beauticians. The Pope issued them a stern warning:

“Above all, may [Martin de Porres, the saint for the hair cutting industry] encourage you to practice your profession in a Christian style, treating customers with kindness and courtesy, and always offering them a good and encouraging word, avoiding giving in to the temptation of gossip that can easily creep into your work environment, as we all know.” [4]

One has to wonder why Pope Francis believes that a so-called epidemic of gossiping among hair stylists has become a real problem for this time. We have Christians being beheaded for their faith, women and children being sex-trafficked world-wide under the guise of immigration and pedophile priests abusing kids – and Pope Francis wants to point out gossiping hairdressers?

Our world is on the verge of a complete moral collapse and Pope Francis is very concerned about what your local hair stylists might be gossiping about. What, if anything, doesn’t the Pope want people talking about – the Vatican? When priests stop sexually abusing children, when cardinals and bishops quit concealing these abominations and when the church takes full responsibility for their part in perpetuating one of the greatest spiritual crisis known to mankind then maybe we can talk about the dangers and threats of the gossiping hairdressers.

Until then, what the Pope says means nothing. It’s time for our society to get its priorities in order.