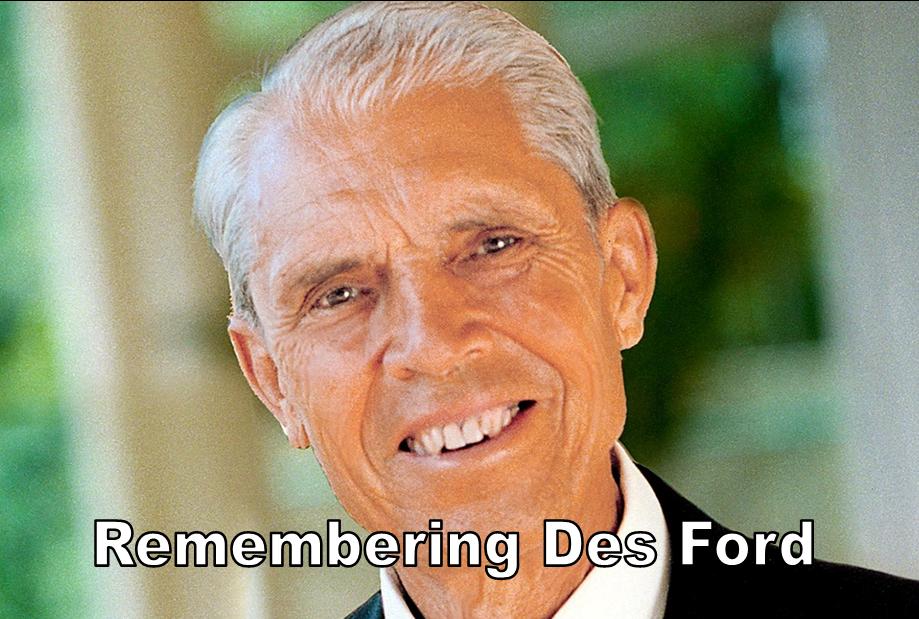 We get a glimpse of what happened through an internal email communication that was sent by Avondale College President, Ray Roennfeldt, to the entire Avondale staff. In the email President Roennfeldt published a letter from the South Pacific Division President, Glenn Townend, explaining the reason why they had to move Dr. Ford’s memorial away from Avondale College. Below is the communication:

It has become necessary to move this service off campus to the Hunter Griffith Duncan Theatre with a new time of 4.00pm, Saturday afternoon 30 March. I am very sorry for any inconvenience this might cause.

Below is the letter written by Glenn Townend, President of the South Pacific Division, that was attached to the above email:

I was saddened to hear about the passing of Dr Des Ford, and my thoughts and sympathies are with his wife and family.

During the 1960s and ‘70s, Dr Ford was a popular theologian on staff at Avondale College, who used his gifts and abilities to bless the Seventh-day Adventist Church through his ministry and education of other ministers. Sadly, a rift emerged between Dr Ford and the Church over certain scriptural understandings and beliefs. This resulted in Dr Ford no longer being employed by the Church. The impact for the Church was global and people were incredibly hurt, with many ministers and members leaving the Church. For many people, the hurt continues to this day.

Recent communications from Avondale following the death of Dr Ford have been perceived as Avondale supporting his theological views. Sadly, this has reignited the pain and distress that many people experienced in the past. It has also been perceived that because the memorial/celebration was to be held on the campus of a Seventh-day Adventist institution, that the South Pacific Division was affirming someone whose views were inconsistent with the Church. This has led to an outpouring of concern and confusion from churches and members and most Conference leaders around Australia.

To try to minimise the controversy that is developing around Dr Ford’s memorial service, for the Ford family, Avondale community and Church, the service will be moved to a venue outside the Avondale campus.

Dr Ford’s memorial should serve as a way for his family and network of friends to honour his life and the considerable historic contribution he made to Avondale. We believe that by holding the memorial in a neutral venue this will best suit this purpose.

I would encourage you to pray for Dr Ford’s family and friends as preparations are made for the memorial.

Both Glenn Townend and Ray Roennfeldt are members of the Avondale College Council, [1] the committee that first authorized Desmond Ford’s Memorial Service to be held on Avondale’s campus. So they first approved Ford’s memorial but then at the last minute they moved it away. Why?

The above communication written by Glenn Townend, President of the South Pacific Division, praises Desmond Ford saying that he was a “…theologian on staff at Avondale College, who used his gifts and abilities to bless the Seventh-day Adventist Church through his ministry and education of other ministers.”

And Ray Roennfeldt, President of Avondale College, got all teary-eyed, as he was singing praises to Ford during the memorial service at the University of Newcastle, as described in the following Twitter post:

The outcry was based on one reason – apostasy. Dr. Desmond Ford dedicated the latter part of his life to promoting teachings that reject and ridicule 1844, the 2,300 day prophecy, the heavenly sanctuary, the investigative judgment and many other historic Seventh-day Adventist beliefs. These doctrinal changes made by Dr. Ford were never authorized by the church and they have no foundation in the word of God.

Desmond Ford’s teachings were borrowed from Calvinism and were rejected by our pioneers and by church leaders until just recently. So many today have embraced Ford’s views in spite of the following warnings:

“Before the last developments of the work of apostasy there will be a confusion of faith … One truth after another will be corrupted” (Maranatha, p. 192)

The Apostle Paul publicly denounced those who attacked the faith through false doctrine; he didn’t praise them:

“This witness is true. Wherefore rebuke them sharply, that they may be sound in the faith.” Titus 1:13.

Paul constantly stood up for truth and publicly rebuked those who were in the wrong. But today we get teary-eyed and heap praises on those who promote bad theology, attempt to change our faith and destroy the old landmarks.

“God will arouse his people; if other means fail, heresies will come in among them, separating the chaff from the wheat” (Testimonies, Vol. 5, p. 707).

Ford’s doctrinal changes, his “heresies” (5T 707) and his “apostasy” (Maranatha 192) should have been the reason for canceling his memorial service at Avondale College; and not for the reasons given by President Glenn Townend – “pain,” “distress,” “confusion” and “controversy.” The event was ultimately cancelled, which was a good thing, but the cancellation was based primarily on the outcry from the faithful and not by the better judgment of the Avondale College Council.

Praise God for all the faithful in Australia who lifted up their voice in protest. God has a remnant who will never bow down to the altar of Calvinism.