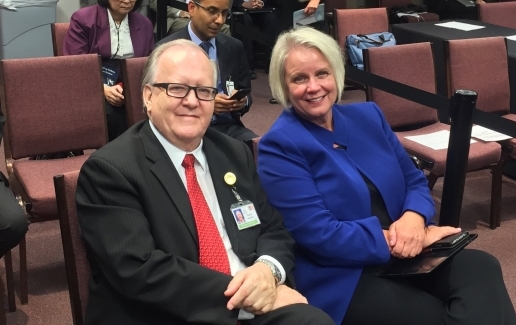 Let me explain the facts. Dan Jackson, president of the North American Division of Seventh-day Adventists, is an avowed women’s ordination advocate. He said so himself.

In the above video President Jackson says that he, along with other leaders at the NAD, will not stop “agitating” for women’s ordination. These sentiments were expressed just two months ago during the NAD’s November 5, 2018 year end meeting.

These words were said even after the Seventh-day Adventist Church has REPEATEDLY rejected women’s ordination. Yet Dan Jackson says he will not stop “agitating” this issue. How then do you characterize someone who takes this kind of a hard-line approach? He is an avowed women’s ordination advocate, and a proud one at that.

Contempt for the Compliance Document

It is also a fact that women are still being ordained throughout the North American Division against the official teachings of the church. [2] [3] [4] This is all being done under Dan Jackson’s watch, and he refuses to say or do anything about it. Why wouldn’t an avowed women’s ordination advocate stop the ordination of women under his leadership? Why doesn’t he at minimum speak out against these invalid ordinations? Could it have anything to do with the fact that he’s an avowed women’s ordination advocate?

There’s more. The NAD has implemented a “Women in Pastoral Ministry Initiative” in which money is given to conferences that hire female pastors. [5] This is an incentive to get more women into the gospel ministry. In other words, if local conferences hire men, they are on their own, but if they hire women for pastoral roles the NAD will help pay their salary. As stated above, some of these same local conferences are moving beyond their advocacy and are actually ordaining women.

So how is the church being politicized and how is the church’s vast media influence being used to engage in disingenuous partisanship and abuse of power? We are living in dangerous times when the combined weight of the NAD and its associates use political tactics to attack conservative Seventh-day Adventists who are actually standing up for the teachings of the church.

When Fulcrum7.com, a conservative Seventh-day Adventist news website, points out Dan Jackson’s advocacy on women’s ordination, the NAD comes out to attack, destroy and discredit conservative voices within Adventism. The NAD, a church entity, put out a hit piece against Fulcrum7 in an attempt to send a message and make an example out of them. [6]

What was their crime? They simply stated that Dan Jackson wants to see women ordained in the Seventh-day Adventist Church. The NAD responded by publishing a press release that was distributed world-wide accusing Fulcrum7 of spreading lies and misinformation. The NAD said that there is no “intent” on their part to ordain women. Of course not. Local conferences under their jurisdiction are already ordaining women while the NAD does nothing to stop it.

The NAD is not sending out press releases expressing their concern or regrets over these violations by some conferences. No. Instead, the NAD is actually opposing the compliance document that would effectively end women’s ordination within the Seventh-day Adventist Church.

“Speaking lies in hypocrisy; having their conscience seared with a hot iron.” 1 Timothy 4:2.

The North American Division in its efforts to “clarify” this situation with Fulcrum7 has only revealed its left-leaning, liberal bias against conservatives within the church. It is disingenuous whenever women’s ordination advocates put out press releases calling conservative Seventh-day Adventists liars for pointing out their advocacy efforts. Does Dan Jackson, an avowed women’s ordination advocate, want to see women ordained? Of course he does. He said so himself. So then why this effort by the NAD to go after Fulcrum7?

Certain people within the NAD are not interested in the unity and diversity that we hear so much about. To liberals, what’s important is not what conservatives say – what’s important is to shut them down. The radical liberal mindset has been trained to beat down the opposition into submission and to shame and silence all voices of dissent.

This situation could have been resolved very easily. The NAD could have asked for a clarification and Fulcrum7 would have been more than willing to do so. But the NAD went beyond the pale. Instead of asking for a clarification, they chose to use the church’s resources to engage in partisanship and politics. Why attempt to clear the air with the conservative brethren when they could instead seek to destroy and embarrass them.