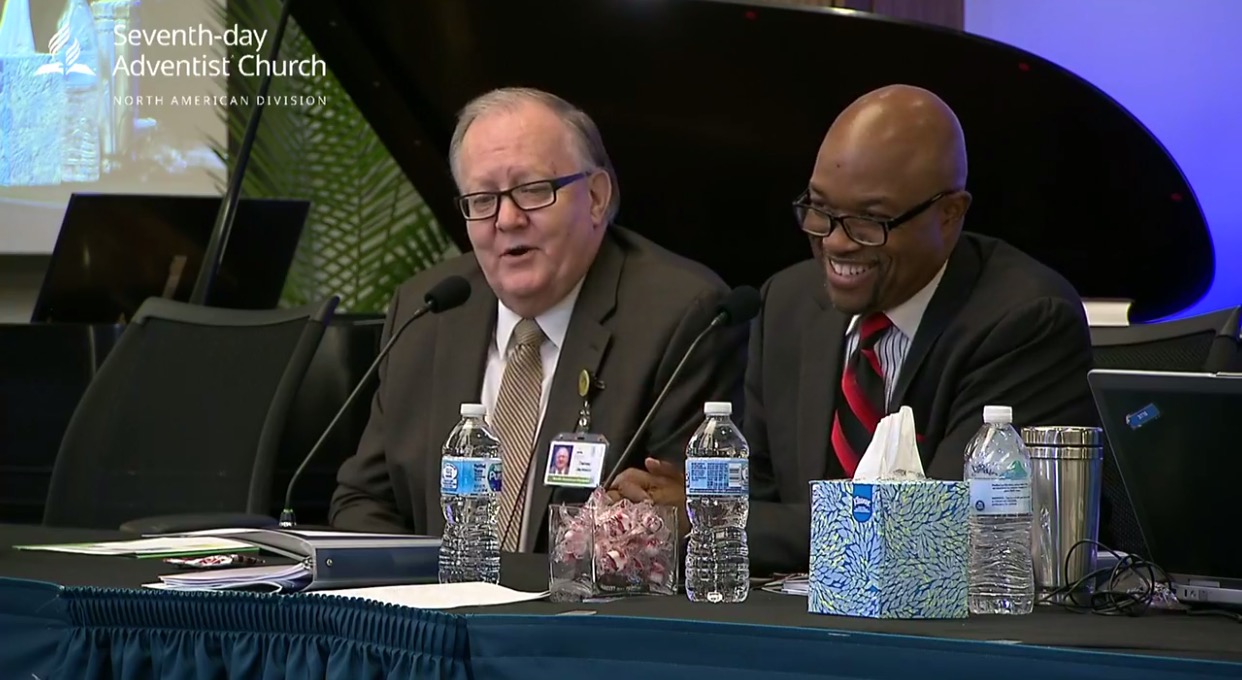 NAD President Dan Jackson chaired the meetings and NAD Executive Secretary G. Alexander Bryant was co-chair. They both conducted an afternoon business session on October 29, 2017 to allow different members of the NAD Executive Committee to express their feelings on the debate over women’s ordination. This particular business session lasted over 3 hours and was designed to be a counter protest against the church’s decision that voted against ordaining women into the ministry.

This was Round 5 in the battle for women’s ordination. The Seventh-day Adventist Church on three previous occasions voted against ordaining women during its world sessions in 1990, 1995 and 2015. Also, the General Conference of SDAs during its 2017 Fall Annual Council meeting attempted to enforce obedience to all non-compliant pastors, conferences, unions and divisions who were still ordaining women against the wishes of the church. A policy was proposed at the 2017 Annual Council that would have stripped non-compliant workers from having a seat or a vote at future GC Sessions or GC Executive Meetings. But the measure was voted down and delayed for another year after 5 hours of “spirited” debate.

It was against this backdrop that Round 5 in this hotly disputed subject came into play at the 2017 NAD year end meetings. NAD President Dan Jackson opened up the floor to the different delegates from North America to express their feelings on women’s ordination.

One after another the delegates expressed that it is not right to discriminate against women. Others said that it wasn’t Biblical to deny women this right. Some stated that we need to be in compliance with the law of equality. A few expressed that the “priesthood of all believers” includes women. Succeeding delegates affirmed that they were not going to sign any document that would obligate them to comply with the church’s official position on women’s ordination. One delegate said that he would rather obey God and support women’s ordination that to obey man and deny women that right.

Of all the leaders, pastors and delegates who stood up to speak, there was only one young Asian man from Canada who stood up and said that all the non-compliant protesters were being “disingenuous.” He said that if the world church in a general session voted on a matter, it was their duty to comply. He was even bold enough and made a motion to vote on a resolution stating that the North American Division should come into compliance with the world church on this matter. His motion was immediately and overwhelmingly shot down as other delegates accused this young man of being “hostile.”

During the 3 hour long meeting President Dan Jackson expressed that the General Conference does not have the authority to dictate ordinations, and that this right is reserved to the unions alone. He also adamantly stated that no one is going to be fired and that women’s ordination was a right reserved for the local level and that he was not going to interfere.

Dan Jackson also stated that regardless of what the world church decides, his Division was suffering due to a shortage of pastors. Therefore, who was he to impede the calling that God is making to women for the ministry. Jackson concluded to all the NAD delegates that they are not in “rebellion” and for anyone to call them “non-compliant” was hurtful, unloving and unChristian.

One thing is certain, the General Conference of Seventh-day Adventists is in a difficult position as it’s most influential entity, the NAD, is refusing to alter its course and come into line with the world church. We are returning to the days described in Scripture where “every man did that which was right in his own eyes” (Judges 21:25).