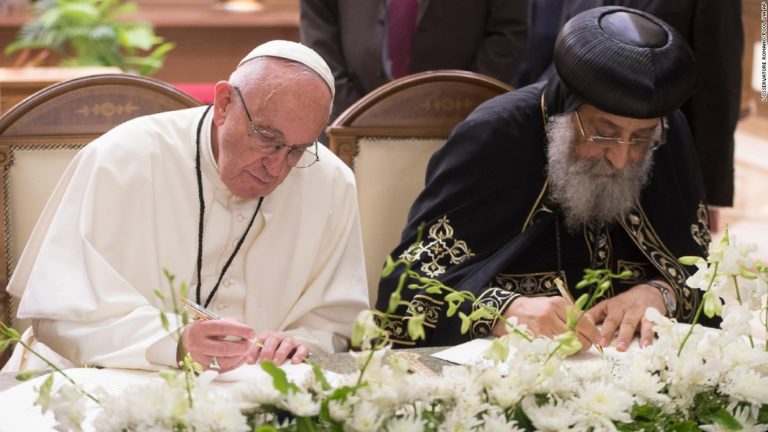 The Coptic Orthodox Church in Egypt split away from the Roman Catholic Church in 451 AD.  And for 1,566 years they had remained independent of Rome. In a historic twist, Tawadros II, head of Egypt’s Coptic Orthodox Church and Pope Francis announced the signing of a joint declaration in which both churches would agree to recognize each others’ baptismal right. This major development means that Pope Francis would not require re-baptism for any Coptic Christian who wanted to join the Roman Catholic Church, and vice versa. Even though Coptic Orthodox Christians baptize their members through immersion and Roman Catholic do it with sprinkling, the new declaration that they signed will recognize each other’s baptism sacrament. This is ground-breaking.

Part of the announcement said: “We, with one mind and heart, will seek sincerely not to repeat the baptism that has been administered in either of our Churches for any person who wishes to join the other.”

This historic announcement comes on the heels of Islamist terrorist bombings of two Coptic churches in Egypt prior to the Pope’s Visit. If fact the signing of this joint declaration took place inside one of the churches that was bombed. Islamic terrorists are taking root all across the Middle East and are targeting Christians. This is causing most of the Christians in the region to turn, en mass, not to God but to Rome.

Pope Francis is the chief architect and promoter of ecumenism. He is pushing for interfaith unity and dialog with every religious group. Not only is he uniting the Christian churches, but he is also seeking unity with the fiercest adversary of Christianity which is Islam. Pope Francis wants to unite with the very ones who were responsible for bombing the Christian Churches. Not only did the Pope visit Egypt to unite the Coptics with Rome, but he also embarked on this trip to strengthen his relationships with Islam.

This is a fulfillment of prophecy that foretells of a great false, world-wide church that would hold supreme power over all the earth. This power is uniting all the churches into one body.

The unity being expressed here is a unity of worship and fellowship and not of Bible truth. There is no Bible study taking place here, no repentance, no confession and no putting away of sin and transgression. This is a fellowship that is based on emotionalism. It doesn’t matter what your belief system is, it matters not if you believe in damnable heresies or even if you doctrines are a blaspheme against God. This is not a unity that honors God. Jesus has told us of the only way in which God will accept our service:

We cannot become one with those who have rejected God’s law and are guilty in God’s eyes of causing the world to become drunk on the wine of false doctrine.

“Preach the word; be instant in season, out of season; reprove, rebuke, exhort with all longsuffering and doctrine. For the time will come when they will not endure sound doctrine; but after their own lusts shall they heap to themselves teachers, having itching ears; And they shall turn away their ears from the truth, and shall be turned unto fables.” 2 Timothy 4:2-4.