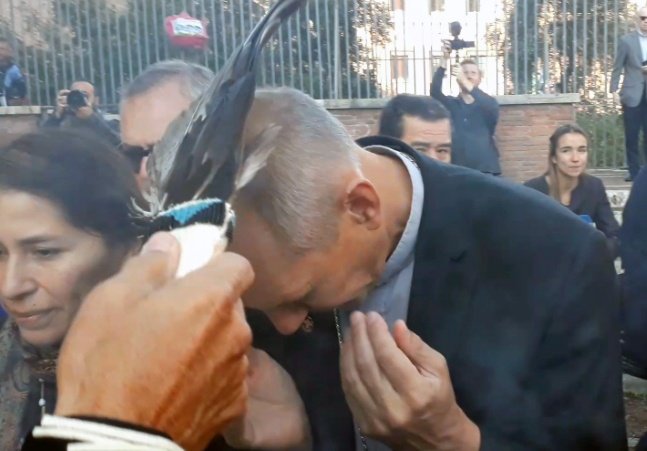 A Catholic Bishop participating in the pagan “smudging” ceremony at the Vatican. See 2nd video below.

A Canadian court has just ruled that all public school children, including Christians, can be forced to participate in pagan mother earth worship ceremonies. British Columbia’s top court has just determined that “smudging ceremonies,” an ancient ritual that cleanses your body and spirit from negative energy, are not religious but “cultural.” [1] Public schools will be allowed to continue bringing Shamans (witch doctors and spirit mediums) into their classrooms to burn sage and cleanse the “spirits” of their students. 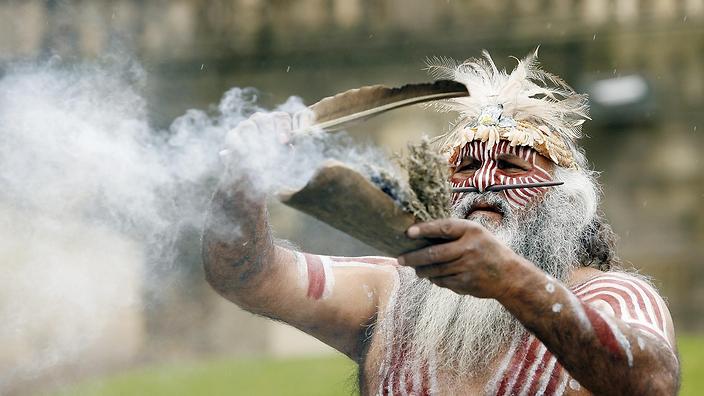 The pagan smudging ritual in Australia.

A Christian mother has lost a court case against a Port Alberni school that was requiring children to participate in the ancient sage-burning purification ceremony called “smudging.” The school brought members of an indigenous Canadian tribe called the “Nuu-chah-nulth” for the purpose of cleansing the children’s spirits. Mandatory prayers were offered as the children were taught pantheistic philosophies. [1] 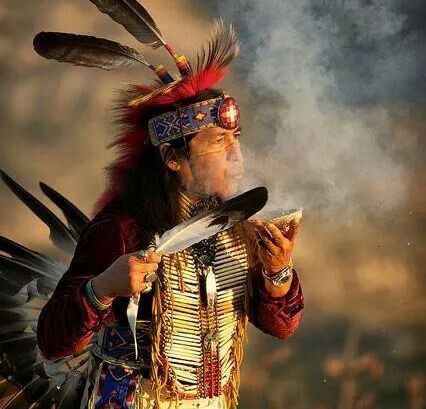 The Nuu-chah-nulth people taught the children that “everything is one, all is connected and everything has a spirit.” They told the kids that unless all negative energy was cleansed that the school would be unsafe. The children were forced to hold a branch in their hands while smoke from a sage plant swept over their bodies and spirit cleansing them.

This is the same spirit of paganism that caused the nation of Israel to build a golden calf in the wilderness. This is pure spiritualism and barbarism and is causing school children to reject Christianity and embrace paganism. Pantheism is literally exploding as we see a revival of pagan teachings in our Western culture today. 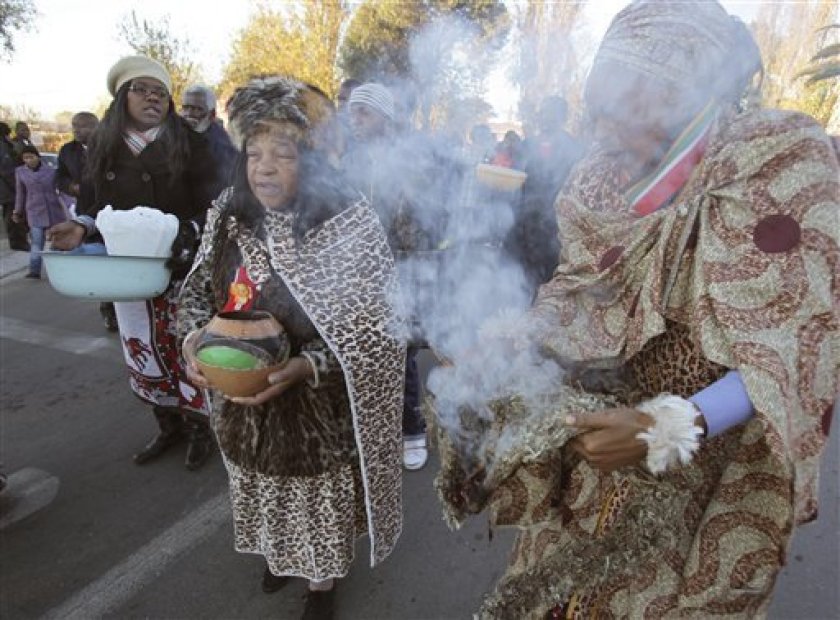 Smudging is also practiced in Africa.

During the Protestant Reformation as the word of God became available, our world moved away from the superstitions of the Dark Ages. The Reformation gave us Judeo-Christian values and these principles brought us out of the bondage of paganism and into a true biblical faith in God. This faith then gave us liberty, blessings and abundance. But now there is a movement to bring us back into bondage through idolatry once again. 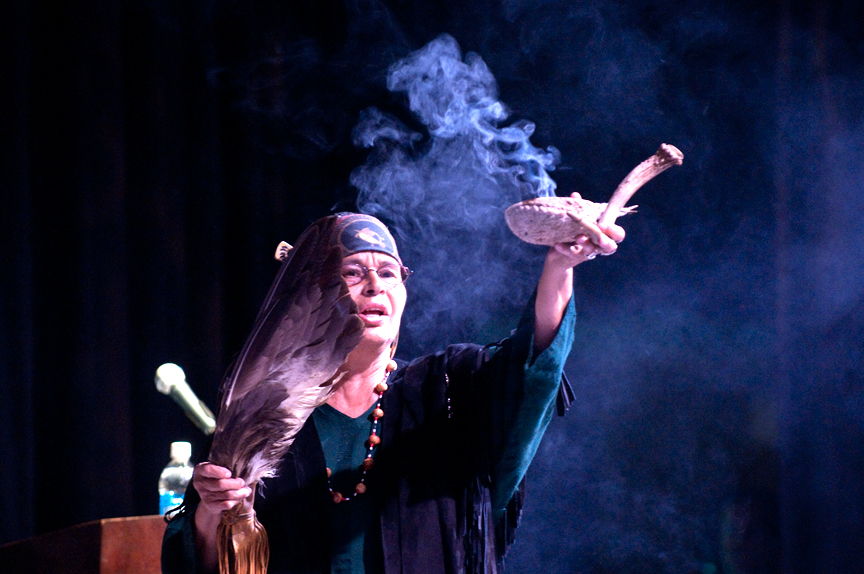 “Now the Spirit speaketh expressly, that in the latter times some shall depart from the faith, giving heed to seducing spirits, and doctrines of devils.” 1 Timothy 4:1.

When people depart from biblical faith they begin embracing seducing spirits and doctrines of devils – or paganism. We are witnessing this biblical fulfillment as the Christian, Western nations of Canada, the United States, Australia and Europe are becoming more and more secular and less and less Christian. When we reject God’s word a vacuum is created that needs to be filled with something. And this void is being filled with paganism as society returns to the worship of Mother Earth.

The burning of sage for purification (smudging) is an old practice that can be traced to ancient pantheism. In the above video you will hear a “smudging” expert reveal that this ceremony is an invocation to the sun and earth to send their “spirits” to be with us. This is demon worship, and Canada is pushing this on their young children.

These Pagan Ceremonies have been Endorsed by Rome

What role does Rome play in all this? These very same pagan rituals were enacted last year during Pope Francis’ Amazon Synod at the Vatican. [2] Around 250 Roman Catholic bishops, priests, nuns and laypeople participated in this same pagan, feather-waving, sage-burning ceremony called “smudging” during the Amazon Synod.

In the video above you will see Roman Catholics bow to receive the smoke of “grandfather” sun and “mother” earth. This isn’t cleansing. They are inviting demons into their lives. Rome has helped to create a resurgence of paganism throughout the world.

How can Christian parents resist paganism at their local schools when Rome is pushing this same spiritualism in the church and upon society? How can Catholic kids and families in Canada protest these things? They can’t. Rome has set a precedent for all the nations of the world to embrace the worship of Mother Earth.

“Satan has long been preparing for his final effort to deceive the world … Little by little he has prepared the way for his masterpiece of deception in the development of spiritualism” (Great Controversy, p, 561). 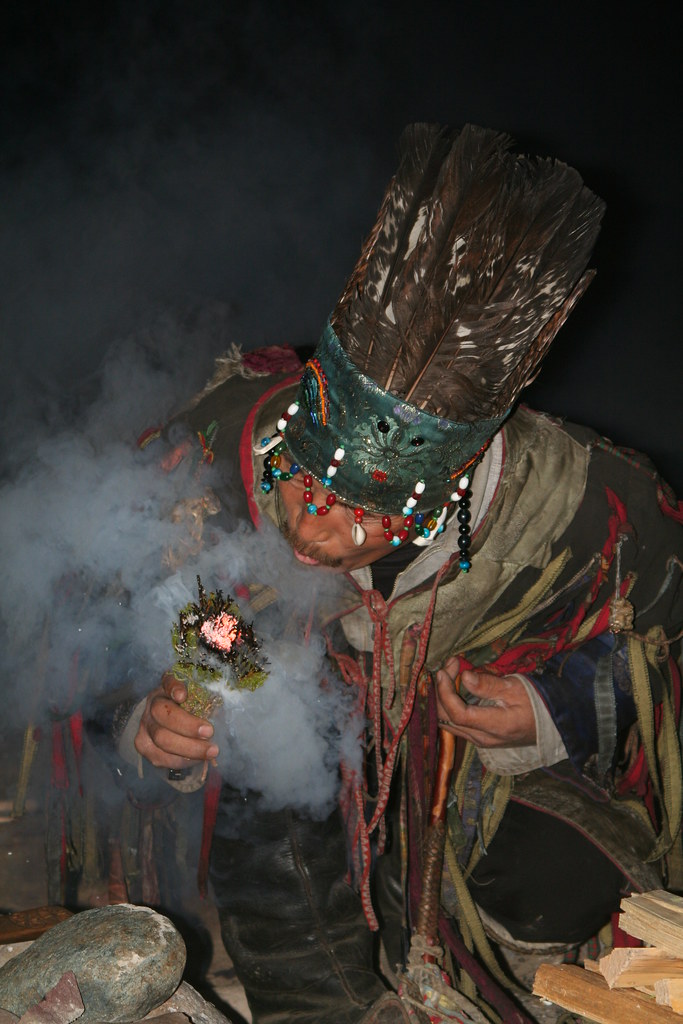 A Shaman in South America during a smudging ceremony.

It is shameful that Canada and many other societies are exploiting their children by indoctrinating them with heathenism and paganism. Our civilizations are increasingly rejecting the Biblical principles and foundations that have made us prosperous. God is being cast aside while a reemergence of the old false gods and pagan rituals are being embraced. We are on the fast track to societal collapse.

“Spiritualism is now changing its form, veiling some of its more objectionable and immoral features, and assuming a Christian guise. Formerly it denounced Christ and the Bible; now it professes to accept both” (Sprit of Prophecy, Vol. 4, p. 405).