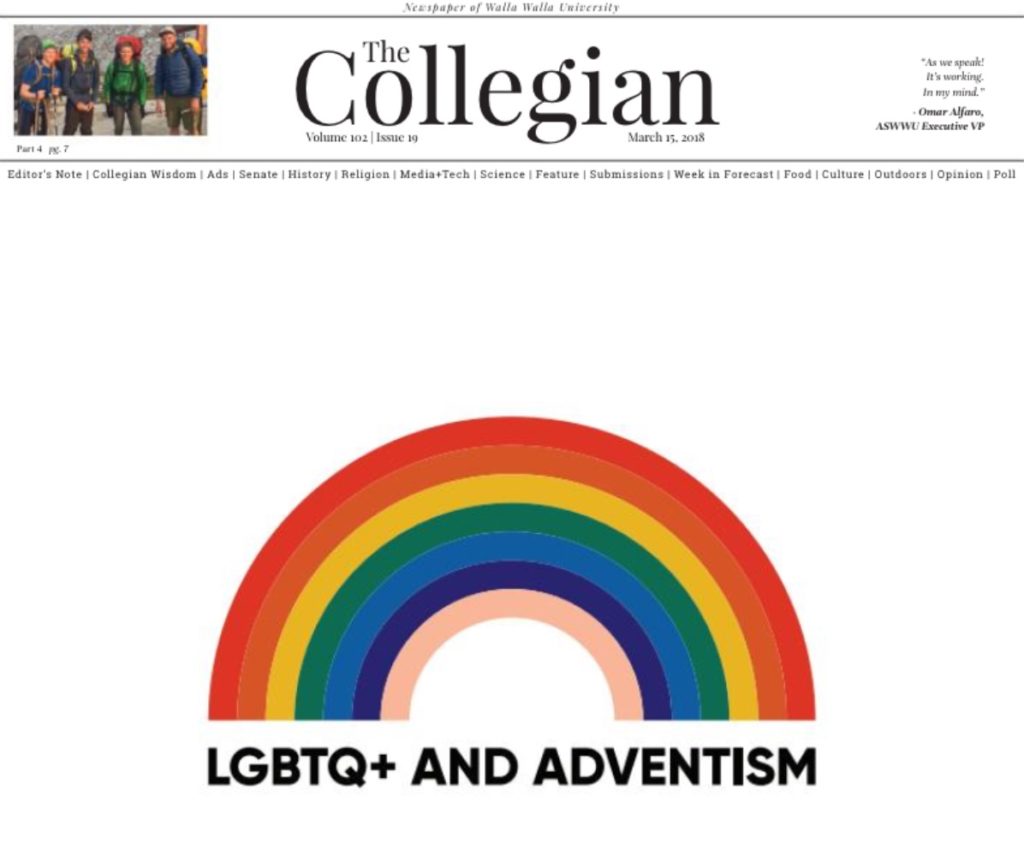 When worldly beliefs and influences attack the church they usually aren’t isolated incidents. The extent of these attacks go far and wide, way beyond just one institution. All of our institutions are under assault. Every faculty, every student body and every university within Adventism is being targeted.

But what will bring about the death knell to Seventh-day Adventist seminaries and universities is when the guardians and gatekeepers of these institutions begin to pay nice compliments and show solidarity and appreciation to those who attack our faith. Instead of protecting our schools from these attacks and sounding an alarm of warning when they happen, many are actually welcoming these attacks; and in some cases certain Seventh-day Adventist schools are providing the attackers with a voice and a platform from which to launch their attack on the faith.

Last year Walla Walla University’s official publication, The Collegian, agreed to dedicate an entire issue to the LGBT+ question. This special issue was a one-sided discussion with 100% pro-LGBT+ essays, editorial and articles. [1] This was done to show inclusiveness and solidarity with its LGBT+ students. When any Seventh-day Adventist institution of higher learning dedicates an entire issue of its official publication that consists of 100% pro-LGBT+ arguments, this is a clear sign that shows where our schools are headed.

1. The Editorial – On page 2 of Issue 19 of The Collegian there is an editorial that says that this special issue is meant to provide a “more honest discussion” on the LGBT+ issue. Then the editorial lashes out against those who show hate towards members of the LGBT+ community. The only problem with this editorial is that the author doesn’t mention anything about the anger and hate that is manifested daily by radical LGBT+ activists. Somehow this important detail was conveniently left out. Well, it’s not a “honest” discussion when you only mention the hate coming out from one side and portray the other side as the only victims. This is actually showing a LGBT+ bias.

2. Article #1 – On page 3 is an article entitled “Queer Reflections” and was written by an openly gay student who attends WWU. He spends most of his time showing how discriminating SDA institutions (WWU) are. The author wonders if worship services at WWU will become “safe” places or will they “bash” people by saying that “homosexuality is a sin.”

3. Article #2 – On page 4 is an article called, “Is Gender Variation Possible?” The author attempts to show that not everything with regard to sexual development is black and white, or male and female. Unique cases of sexual development are presented with the notion that it may be time to consider more than just two sexual classifications. References are given that present only one side to this debate. You can find studies and experts on both sides to every issues. Sadly, only one side was presented. Here is a link that shows a different perspective the WWU community never received. [2]

4. Article #3 – On page 5 is an article entitled “LGBTQ+ and Adventism.” This article mentions in passing that Seventh-day Adventists do not “endorse” the LGBT+ community because of certain Bible versus. The author then goes on to show that within Christianity there is more than just one way of interpreting these versus. Then a long, one-sided explanation is given showing how the original Biblical word for “homosexuality” really means “pedophilia.” The article explains that modern scholars were the ones who changed the Biblical prohibitions to include homosexuality, but originally, it wasn’t there.

Again, only the pro-LGBT+ side is presented. This is the same common argument used by those who support homosexuality, but these arguments are not grounded in Scripture because they reject the clear teachings found in Leviticus 18:22, Leviticus 20:13, Judges 19:22, Matthew 19:4-6, Romans 1:27, Genesis 19:5.

5. Essays – On page 5 and 8 you will see different essays written by several LGBT+ students who attend WWU. Some express the hardships they endure while others proclaim that they are gay and love God. Others write about their “undeniable genetic disposition” to “same sex attraction.” One essay written by a bisexual student doesn’t really know how to put into words the reason for dating both males and females.

This is what Walla Walla University is subjecting its students to. They are introducing them to the same pro-LGBT+ propaganda that you’ll find in the world. But it’s not in the world, it’s being forced upon the minds of Seventh-say Adventist students by WWU.

6. Survey – On page 5 a survey was conducted as to whether or not Walla Walla University should acknowledge the LGBT+ community. The survey included in the “yes” section of the vote the following phrase: “Who cares where two consenting adults get their socks off. We’re all just people.”

Wow! Who cares what two consenting adults do with regards to the LGBT+ question? God cares, and He has expressed His concern and has warned his church about this in the Holy Scriptures. It’s time for our leaders to start caring because apperantly they don’t care either. This “who cares” attitude is the same kind of faulty reasoning used by the serpent in the Garden of Eden.

The results of the vote was 53.5% in favor of acknowledging the LGBT+ community while 44.7% voted against it. These numbers are a reflection of the changes that we have been seeing recently in Adventism. It shows you how the next generation of leaders will view the LGBT+ question.

7. Official WWU Statement – On page 8 you will read the official statement published by Walla Walla University on the LGBT+ question given by Hilary Catlett, assistant vice president and dean of students at WWU.

The official statement uses the same often quoted words that are selectively chosen to basically say nothing. The statement says that WWU believes that everyone is made in the image of God and that we all share a “common human experience.”

The statement then says that while WWU seeks to follow the Bible, they recognize that there are “different interpretations of Scripture” and that there are “tensions and disagreements” on the LGBT+ subject.

Oh really? Since when has there been disagreements and tensions in Adventism on the LGBT+ question? There never has been. It’s the current leadership in many of these institutions who are creating controversy where there never was any controversy.

The WWU official statement on the LGBT+ question then says that WWU desires to create a safe place for all of its students and that the campus will not tolerate hate or violence. The statement ends by saying that all students will be protected.

Let’s interpret the words of Hilary Catlett in relation to this special LGBT+ edition of The Collegian:

The justification for promoting the LGBT+ movement to the entire Walla Walla University community in the school paper is because of a “shared human experience” with LGBT+ students. Since we are all made in God’s image and since there are different views of iterpreting the Bible it’s ok to publish pro-LGBT+ propaganda to everyone.

If you follow this mushy reasoning to its logical conclusion then WWU needs to publish a special issue with a pentagram on its front cover to show solidarity with the occult. There are probably some students who might have some leaning towards horror movies, witches, magic or the occult.

Maybe WWU ought to have a special edition showing the letters KKK on its cover to demonstrate solidarity with the KKK. The KKK has its own views of scripture and they are humans too. Some student may be closeted members of the KKK and we have to be inclusive to “all” students.

Maybe WWU should have an edition showing a picture of a swastika. They should also be willing to stand in solidarity with neo-Nazis. They are humans too and it’s possible that not every neo-Nazi is violent.

Or maybe for one week the WWU faculty and students should smoke cigarettes to show solidarity with smokers. Smokers are humans and they are entitled to some form of human dignity and a platform at WWU.

Where does it end? It doesn’t. It’s one thing to stand in solidarity with sinners and another to stand in solidarity with their SIN by providing a platform to promote a sinful lifestyle in a official publication of a Seventh-day Adventist institution. Ok, I get it, we have to love sinners – but why should we promote a godless ideology in what is supposed to be a biblically-based Christian institution? There is no justification for publishing the pro-LGBT+ agenda and values to our young students.

This is how an entire generation becomes lost. We are watching the demise of our own people right before our very eyes. We are seeing the enemy gaining a strong foothold in the church while a clueless, helpless administration does nothing to stop this. It is painful to have to see what is taking place today and even more troubling to have to read what God’s word says about this:

“And for this cause God shall send them strong delusion, that they should believe a lie: That they all might be damned who believed not the truth, but had pleasure in unrighteousness.” 2 Thessalonians 2:11, 12.

So what’s the solution you might ask? Oh yes, there is a solution. The Lord foresaw all of this and He has told us exactly what to do in cases just like this:

“If a worldly influence is to bear sway in our school, then sell it out to worldlings, and let them take the entire control…Education not only affects to a great degree the life of the students in this world, but its influence extends to eternity” (Ellen G. White, The Home and Church School Manual, p. 11)

Replace the entire administration, including those in charge of the school’s publication because WWU has a continuous pattern/agenda of pushing pro-LGBT+ propaganda. [3] One can only wonder why this is allowed to continue.

If no action is taken then kiss Seventh-day Adventist higher education goodbye. One institution can affect all the other ones. Yes, one bad apple spreading bad theology can spoil the entire barrel: