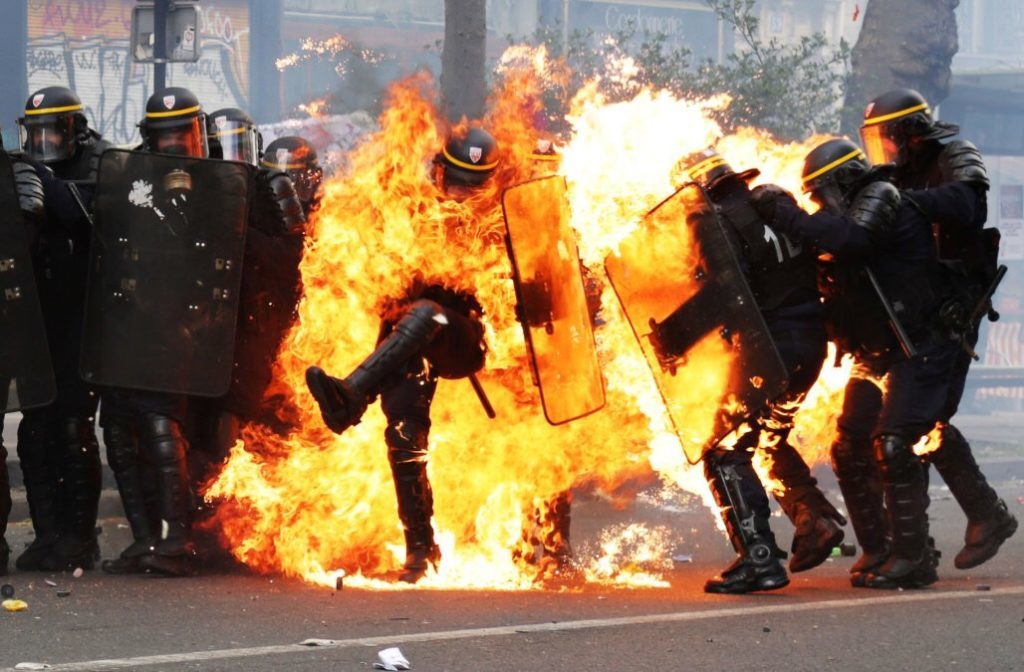 “In those days…every man did that which was right in his own eyes.” Judges 21:25.

Anarchists and protesters have taken to the streets recently here in America, in France and in other locations. They are rioting, inciting violence, attacking business, burning vehicles and attacking police with rocks and Molotov cocktails. These demonstrations are revealing the deep divide that exists in our world. In France six riot police were injured, one severely with third degree burns. The rioters had expressed they had come to injure and kill police.

This is a sign of the growing anger in our world and a sign on how our world is on edge with so much violence bubbling under the surface of what we can see. God’s word tells us that prosperity and peace in the land comes only as the result of seeking Him. When any society turns away from what God has established to be the foundation for society then the potential for violence, anarchy and terror will always be present.

“Therefore he said unto Judah, Let us build these cities, and make about [them] walls, and towers, gates, and bars, [while] the land [is] yet before us; because we have sought the LORD our God, we have sought [him], and he hath given us rest on every side. So they built and prospered.” 2 Chronicles 14:7.

God is alive and He is more than willing to give us peace from economic troubles, terrorism, police brutality, riots and political corruption. We don’t have to continue with the status quo.

Any supposed peace without peace with God will not have any true, lasting effects. In fact, God alone promises and delivers peace from all of our enemies. There is a way in which things can go well with us, free from state of emergency that we are now living under.

“Observe and hear all these words which I command thee, that it may go well with thee, and with thy children after thee for ever, when thou doest that which is good and right in the sight of the LORD thy God.” Deuteronomy 12:28.

It is God’s moral laws that is the moral restraint that will keep society from committing atrocities, violence and mass destruction. And it is the absence of morality that is cause the current world crises to consume not just our Western Civilization but the entire world.

When we alter the definition of right from wrong then we create a society where there are no absolutes. Abortion, assisted suicide, drug use, pornography, gender identity, the definition of marriage and many other practices which were not accepted before have now become socially acceptable and even fashionable.

Educators, politicians and even many in the clergy are now teaching that morality needs to evolve and keep up with the times. Western society has accepted the premise that there is no absolute truth. This is the prevailing philosophy of Hollywood and the entertainment industries. This kind of thinking is destroying our families and leading to the racial and social problems we are seeing.

There are heinous crimes being perpetuated that violate God’s moral law. These crimes do not violate what society today has accepted as moral relativism. Yet this concept and ideology that teaches one to do what is right in your own eyes is responsible for the looting, rioting and anarchy that prevails today.

It is God alone who can enable man to establish peace and rest. This happens when we begin to seek Him will all our hearts.

“And all Judah rejoiced at the oath: for they had sworn with all their heart, and sought him with their whole desire; and he was found of them: and the LORD gave them rest round about.” 2 Chronicles 15:15.

Compare this wonderful prospect with another scenario that is inescapable if we continue upon the path we’ve been going:

Until our society can accept God’s law as the unchanging standard of morality, we stand in great danger. Unless the eternal principles of right and wrong enter into our consciousness then we will remain sick in the cesspools of sin that is currently poisoning our “new culture.”

Thankfully, the Bible records a definitive promise that God not stand idle but will intervene to save human beings from this world crisis.

“But now the LORD my God hath given me rest on every side, [so that there is] neither adversary nor evil occurrent.” 1 Kings 5:4.