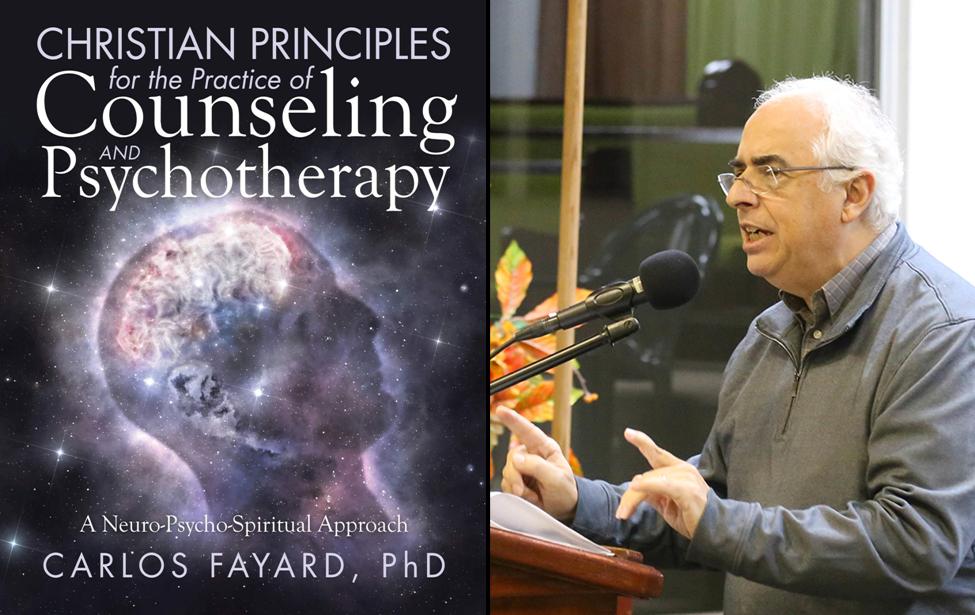 Dr. Carlos Fayard is an associate professor at the Loma Linda University School of Medicine. [1] He is also “Assistant Director of Mental Health Affairs in the Health Ministries Department of the World Headquarters of the Seventh-day Adventist Church.” [2] Surprisingly, he is also a “consultant” for the Catholic Diocese of San Bernardino, California and uses his expertise in the service of Rome. [2]

What exactly has he done for Roman Catholics? In his book “Christian Principles for the Practice of Counseling and Psychotherapy,” Dr. Carlos Fayard relates the story about one of his patients who was a sexually active homosexual priest. On page 3 of his book, Dr Fayard explains that this gay priest named “Joe” contracted HIV due to his frequent homosexual relationships that had “escalated to anonymous” encounters with other men in public spaces.”

But Dr. Carlos Fayard not only helps gay Catholic Priests with their sex addictions, he also helps them reconnect with the Virgin Mary using Cognitive Behavioral Therapy (CBT). Notice what pages 72 and 73 say in Dr. Fayard’s book:

“What I was theologically blind to was that Joe could imagine spiritual beings congruent with his own theological tradition. He pictured close to him the saint after whom his mother had named him, and also, out of the corner of the eye of his imagination, he saw the Virgin Mary. This sight shifted his emotional experience back to a sense of guilt and shame. I gently inquired what was happening, and he could hardly speak, as he was gasping for air. I redirected his attention to those that surrounded him, eliciting a different reaction. After he was able to again experience God’s forgiveness and acceptance, I asked him to open his eyes and elaborate on what had happened. Joe told me he felt that God had forgiven him and accepted him, but that he could not “face the Blessed Mother,” not because he felt she would have a punitive attitude, but because he had disappointed her in a major way.Joe knew of my spiritual commitments and understood my limitations in being able to fully grasp the implications of what he had said, and so he proceeded to educate me. I accepted what Joe told me as his psychological reality. In that sense, I became a narrativist for a while, as his theological understanding and mine were very different, and so I went back to using CBT principles to challenge the assumptions that prevented him from engaging in specific prayer activities involving Mary. Eventually, he was able to do so, and he could then feel the benefits from restoring yet another relationship.” 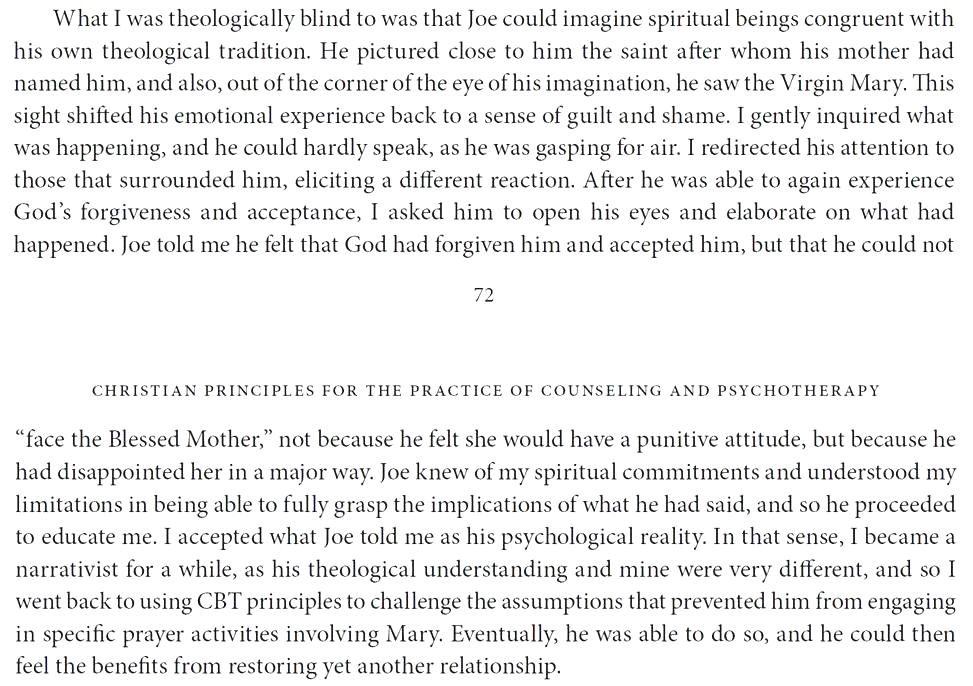 A member of the General Conference Health Ministries and associate professor at Loma Linda University School of Medicine is helping to “restore” the “relationships” between gay priests and the Virgin Mary. Rome must be very happy when its sex addicted priests can learn to pray again to the Virgin Mary, all thanks to our leaders.

(Let us digress for a moment. We will come back to the Virgin Mary). But to make matters worse, this is the same Dr. Carlos Fayard who writes for the Adventist Review telling the world church that anti-vaxxers are simple-minded because they are not using their brain properly. In an article published on April 24, 2021 by the Adventist Review titled “The Psychology of Vaccine Hesitation,” Dr. Fayard states that those who refuse to take the Covid-19 vaccine are not using the part of their brain that processes “rational information.” Instead, anti-vaxxers are using the part of the brain that is only “emotion-based”. [3]

Dr. Fayard is telling Seventh-day Adventists that he is the expert who knows how our brains work. If you do not do what he says and get the vaccine, it is not logical. Why? On what is this conclusion based? Anti-vaxxers are illogical simply because they are not doing what he says. He is the authority. He has the credentials. And if you don’t listen to him, you are not a logical thinker.

Have we forgotten that reason and logic come from facts? And the fact is, there is no scientific evidence because not enough testing has been done. What scientific proof does Dr. Fayard give in his article to show that all these inexplicable adverse effects and deaths are not caused by vaccines?

We are not talking about emotions. What scientific data does Dr. Fayard have that explains why so many teens who took the vaccine now have heart problems, teens who never had any pre-existing conditions or medical history? And in some cases, these teens were athletes. Why do so many young people suddenly have heart attacks or enlarged hearts? [4] [5] How do you scientifically explain why a perfectly healthy adolescent develops serious health problems after receiving the vaccine? Where is the proof that vaccines did not cause these problems?

But this is where the Adventist Review failed to do its due diligence. They did not ask Dr. Fayard the real and most pressing questions about the human brain. But it’s not just Adventist Review, Loma Linda University School of Medicine, and the General Conference Health Ministries need to seriously consider the following questions about the use of the human brain (Now let’s get back to the topic of the Virgin Mary).

• What part of the human brain are we using when Seventh-day Adventists reconnect Catholics to the Virgin Mary?

• What part of the brain is making us forget Revelation 14:6-12, our true mission and message?

• What part of the brain causes this type of spiritual blindness?

• What part of the brain is causing many of our leaders to care more about influence, money, position and power than about saving souls?

• What part of the brain causes us to remain silent in a time of seditious apostasy?

• What part of the brain is causing outright rebellion and spiritual decay within the church today?

• What part of the brain, if any, are these men using?

When will Dr. Fayard apply his Cognitive Behavioral Therapy (CBT) to reconnect our Seventh-day Adventist leaders with the Three Angels’ Message? That’s what he should be doing. Or does he only reconnect gay Catholic priests with the Virgin Mary? What a shame! And these are the “experts” in the church today who are telling us to listen to them? These are the “scientists” in the church telling us that WE are not using OUR brains correctly?

Notice what we are dealing with today in church:

“Evil angels in the form of believers will work in our ranks to bring in a strong spirit of unbelief. Let not even this discourage you, but bring a true heart to the help of the Lord against the powers of satanic agencies. These powers of evil will assemble in our meetings, not to receive a blessing, but to counterwork the influences of the Spirit of God” (Mind, Character, and Personality, Vol. 2, pp. 504, 505).

Based on the words of inspiration from the above statement, I’m really beginning to wonder if the devil really has his own office at Loma Linda University. Somewhere in Loma Linda, between Dr. Jon Paulien and Dr. Carlos Fayard, Satan has to have an office or a cubicle with his name tag posted to a door. He must be coming in every day and punching in the time clock and doing his business. Since Loma Linda University is an entity owned by the General Conference (not the NAD), maybe the General Conference should investigate what’s going on at Loma Linda. Or maybe Satan has already installed a cubicle at the General Conference as well, somewhere between Ganoune Diop and Ted Wilson.