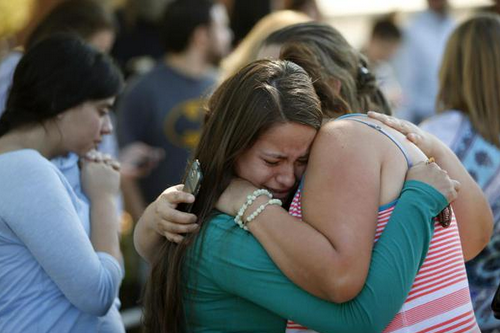 We are living in what could perhaps be considered one of the most violent eras of earth’s history. The violence that we are seeing is devastating and demoralizing as innocent children, mothers, the elderly and law enforcement are being murdered. This is only an indication that we are living in an unprecedented prophetic period described in prophecy. Notice the events during this last week alone:

These stories and others that are being repeated almost daily reveal that people are feeling desperate, rejected, angry and without any hope. Guns and violence is the solution which people are turning to, not knowing that violence only breeds more violence. Massive acts of aggression, threats and violence are on the minds of our world leaders and on the minds of the people in general. This generation is by far the greatest purveyor of violence our world has ever seen.

No one is safe, no not in the schools, not in the malls, not in the clubs and theaters – not even in church – when you consider that people have recently been killed and massacred in houses of worship in Egypt and in South Carolina. At every level of society, from the government down to the children’s playground, the soul of America is dying – it is being killed and murdered without mercy and compassion. Somehow this madness has to stop. It needs to stop. God is telling mankind to stop the violence or else He will do it.

After the flood came the violence stopped. But today we have gone full circle and have returned to the days of Noah. Notice what Jesus says:

If we continue as we are going, if we don’t act and if we don’t take steps to scale back the flood of wickedness that is sweeping the world then we will surely be dragged down into the pits of affliction, grief, sorrow, suffering and death. It is not enough to simple be concerned about Iran, North Korea and Russia. We need to also look at our own problems here – in our cities and ghettos and urban centers where a lot of the death and destruction is taking place daily.

Somehow this madness must cease. We must stop now. And who’s responsible? Our government? Radical Islamists? Racism? Who is poisoning the minds of our people? One thing is certain, whenever we see all of the tragic and senseless acts of violence we need to understand that all this is just a symptom of a far deeper problem facing our world. We cannot continue to ignore where the real problem is.

It is sin in all its various manifestations that is the root of the problems. Selfishness, greed, racism, drugs, vice, corruption, the break down of morality, the rejection of God’s standard of right and justice is what is causing this floodgate of iniquity to engulf our world.

“Those who teach the people to lightly regard the commandments of God, sow disobedience, to reap disobedience. Let the restraint imposed by the divine law be wholly cast aside, and human laws would soon be disregarded. Because God forbids dishonest practices, coveting, lying, and defrauding, men are ready to trample upon his statutes as a hindrance to their worldly prosperity; but the results of banishing these precepts would be such as they do not anticipate. If the law were not binding, why should any fear to transgress? Property would no longer be safe. Men would obtain their neighbor’s possessions by violence; and the strongest would become richest. Life itself would not be respected. The marriage vow would no longer stand as a sacred bulwark to protect the family. He who had the power, would, if he desired, take his neighbor’s wife by violence. The fifth commandment would be set aside with the fourth. Children would not shrink from taking the life of their parents, if by so doing they could obtain the desire of their corrupt hearts. The civilized world would become a horde of robbers and assassins; and peace, rest, and happiness would be banished from the earth. Already the doctrine that men are released from obedience to God’s requirements has weakened the force of moral obligation, and opened the flood-gates of iniquity upon the world. Lawlessness, dissipation, and corruption are sweeping in upon us like an overwhelming tide” (Great Controversy, 585).

If all the leaders of our governments, schools, churches and families would only take a stand for the righteous and holy principles found in God’s word then and only then can we hasten the day where in America and in all the world we can finally usher in a new day where “judgment run down as waters, and righteousness as a mighty stream.” Amos 5:24.

If we don’t then we are told what the end result will be:

“Courts of justice are corrupt. Rulers are actuated by desire for gain, and love of sensual pleasure. Intemperance has beclouded the faculties of many, so that Satan has almost complete control of them. Jurists are perverted, bribed, deluded. Drunkenness and revelry, passion, envy, dishonesty of every sort, are represented among those who administer the laws. ‘Justice standeth afar off; for truth is fallen in the street, and equity cannot enter.’ [Isaiah 59:14.]” (Great Controversy, 596).